This article continues the discussion of the long-running farm policy that triggers payments to farmers using crop prices fixed in statute (farmdoc daily, April 5, 2018; March 8, 2018; February 22, 2018). The previous articles looked at historic target price policy as it operated from 1975 to 1995, comparing the prices established in statute with market year average prices, costs of production and expenditures. This article begins a similar review of the policies as authorized since the 2002 Farm Bill. This discussion takes on additional relevance with the recent vote by the House Agriculture Committee to report a bill reauthorizing farm bill programs, including continuation of the fixed price policy known as Price Loss Coverage (PLC) contained in the Agricultural Act of 2014 (farmdoc daily, April 26, 2018).

In 1996, Congress upended more than 60 years of farm policy (Coppess 2018). The Federal Agricultural Improvement and Reform Act of 1996 decoupled farm payments from production and prices; replacing target prices with annual contract payments. A subsequent decline in crop prices from the fallout of the Asian financial crisis resulted in additional payments approved by Congress on an ad hoc basis and known as Market Loss Assistance Payments. Figure 1 uses data provided by the Commodity Credit Corporation (CCC) to illustrate total payments by crop year under the Production Flexibility Contracts (PFC) from the 1996 Farm Bill and for the additional Marketing Loss Assistance (MLA) payments in subsequent ad hoc legislation (USDA-FSA, CCC Budget Essentials). Figure 2 illustrates the marketing year average (MYA) prices for corn, cotton and wheat during these years. 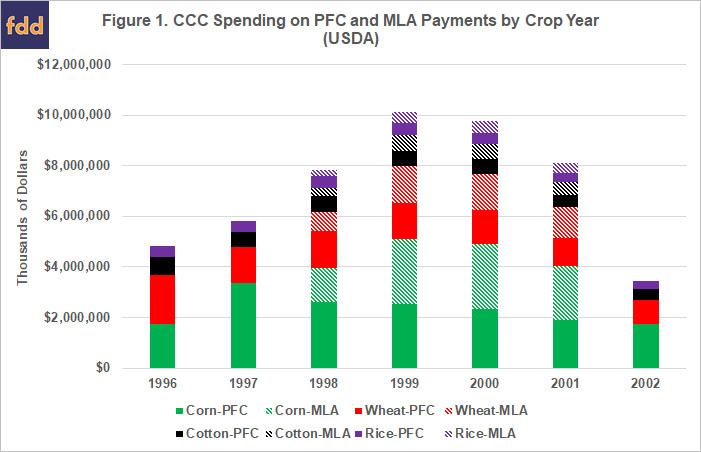 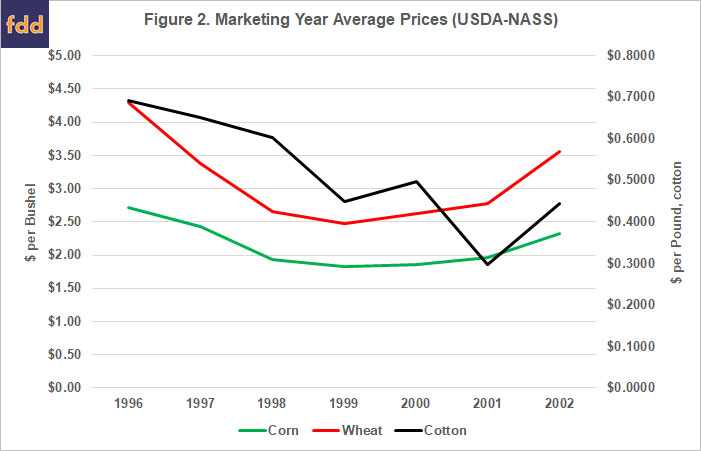 Return of Fixed Price Policy in the 2002 Farm Bill

In 2001, the House and Senate Ag Committees were able to secure additional baseline funding through the budget process and the 2002 Farm Bill was written to spend the estimated additional $73.5 billion; most of the funding went to commodities and specifically to a re-created fixed price policy in the form of target prices in the Counter-cyclical Payments (CCP) program. These payments were in addition to direct payments made every year, a continuation of the PFC concept from the 1996 Farm Bill, as well as in addition to any marketing assistance loan benefits or Loan Deficiency Payments (LDP).

The 1996 Farm Bill had also decoupled payments from production decisions using contract acres for each crop and allowing the farmer to plant any commodity on the acres without impacting payments. Renamed base acres in 2002, this reform has continued in each subsequent reauthorization of farm policy since 1996. Direct payments were designed as a fixed payment rate on program yields and paid on 85% of the base acres for the crop. For the CCP, Congress fixed statutory target prices but payments were triggered using the MYA as compared to an effective target price that subtracted out the direct payment rate. For example, corn base received direct payments at $0.28 per bushel and had a target price of $2.60 per bushel for an effective target price of $2.32 per bushel.

Figures 3a and 3b compare MYA prices with the statutory fixed prices (effective target prices 2002-2014; reference prices 2014-2028p). Notably, cotton’s fixed price was eliminated by the 2014 Farm Bill and reinstated for the 2018 crop year by the Bipartisan Budget Act of 2018. Projected prices are from the Congressional Budget Office’s April 2018 Baseline (CBO, April 2018). The 2002 Farm Bill also brought soybeans and peanuts into the CCP program, allowing farmers to add base acres and providing them with fixed prices as well. Figure 3b compares prices for soybeans, peanuts and rice; note that rice has been converted to dollars per pound from the dollars per hundredweight. 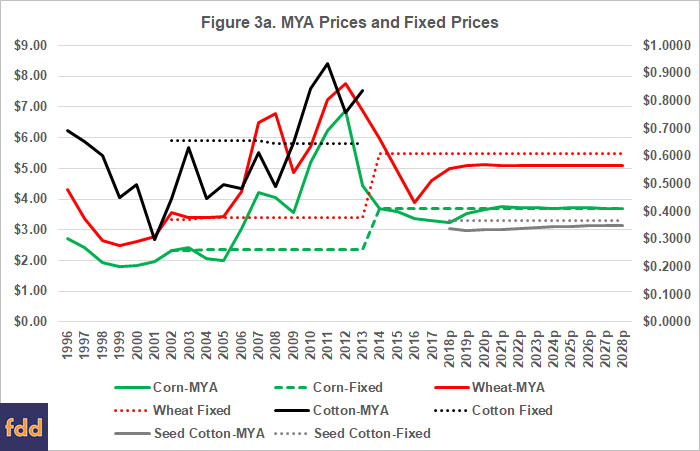 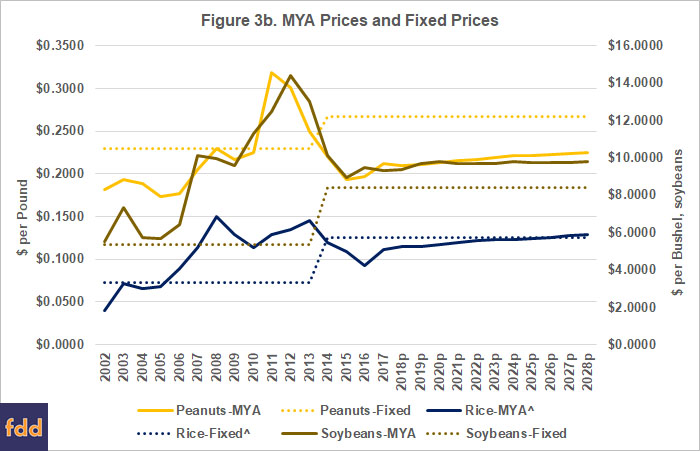 From Figures 3a and 3b it is apparent that the prices fixed in statute by Congress are not the same relative to marketing year average prices. Because the commodities use different measures of production (bushels, pounds and hundredweight), however, it is difficult to compare them. What follows in this discussion are multiple methods for comparing the prices as fixed by Congress in the farm bill. 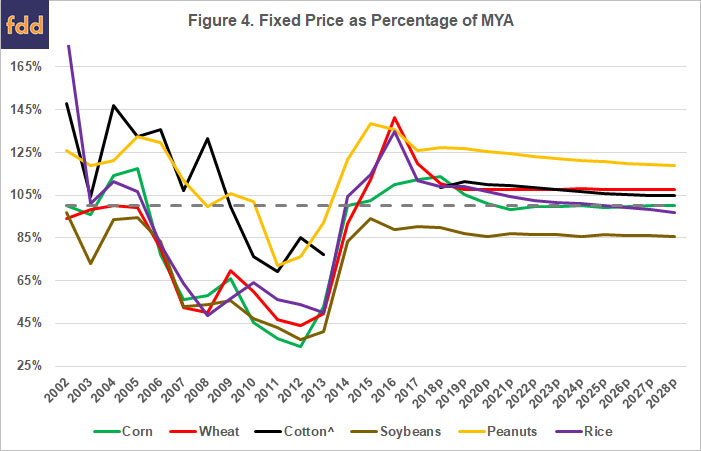 Table 1 compares the effective target prices and the 2014 reference prices with the average MYA prices for the 5 and 10 year intervals prior to the bill’s passage in Congress. This comparison looks to the fixed price level selected by Congress with the known crop prices leading up to that farm bill. 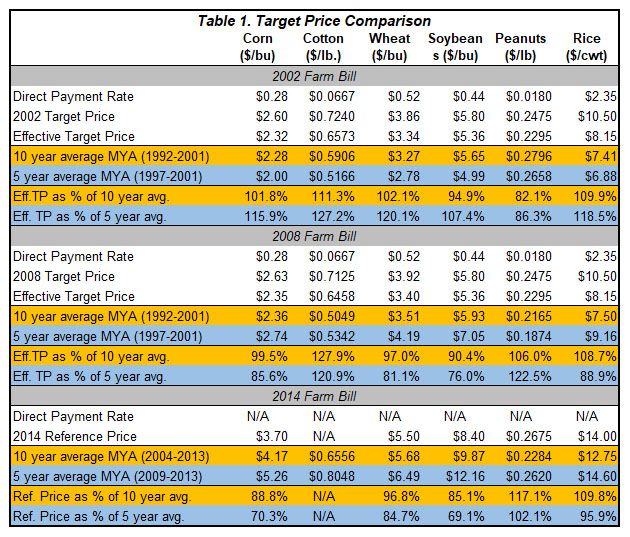 Based on this method of comparison, cotton’s 2002 target price was the most favorable among the commodities in the program and continued to have the most favorable target price in the 2008 Farm Bill. Figure 5 reinforces this conclusion; based on actual expenditures by the Commodity Credit Corporation (CCC) during the crop years of the 2002 Farm Bill, cotton received far more under the target prices and, along with peanuts, triggered payments each crop year. 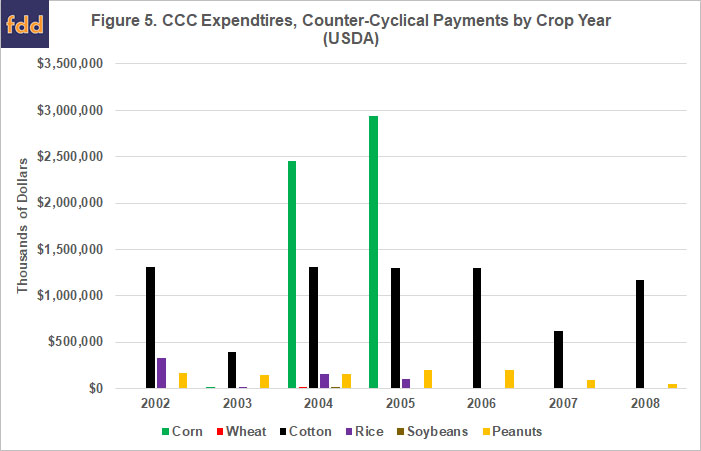 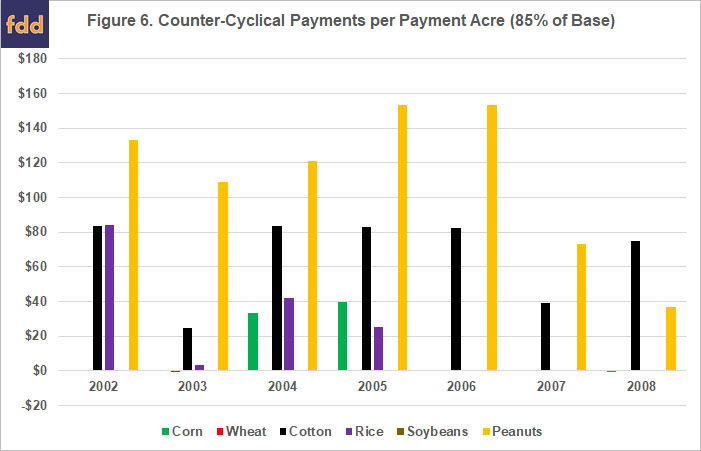 As Congress undertakes farm bill reauthorization, the fixed-price policy for farm program payments remains at the forefront of the commodity policy debate (farmdoc daily, April 26, 2018). Given relatively low crop prices in recent years and projections for them to remain at these lower levels, as well as the return of cotton acres to the program, questions about this policy arguably become more pressing. A policy by which Congress fixes price triggers in the statute raises concerns due to a lack of transparency. Lacking transparency, it is difficult to measure whether the prices were fixed on a fair and equitable basis among the commodities covered by the policy. Comparing fixed prices in the last three farm bills with marketing year average prices demonstrates reason for this concern. Based on market prices, Congress provided owners of cotton and peanut base with far more favorable target prices in 2002 and continued that favorable treatment in 2008. With cotton removed in 2014, peanuts received the most favorable treatment by Congress in this version of the policy as contained in the Price Loss Coverage (PLC) program.

One question facing Congress as it undertakes reauthorization is whether it will continue this inequitable treatment in farm program policy. The House Ag Committee farm bill as reported to the full House does, however, add a market-oriented potential upside to reference prices. By comparison, Senators John Thune (R-SD) and Sherrod Brown (D-OH) have introduced a bill that would revise the ARC program but also institute a cap on reference prices that prevent them from exceeding the 10-year average MYA price (Wyant, April 26, 2018). Future articles will provide further analysis of these provisions and the impacts of fixed price policy.