The World Agriculture Supply and Demand Estimate (WASDE) report contained its first estimates of 2018/2019 supply and use. Midpoints of their market year average (MYA) prices ranges are $3.80 per bushel for corn and $10.00 per bushel for soybeans.  These price estimates, along with trend yields result in U.S. per acre crop revenue above 2017 levels but below 2007-2017 averages.  Obviously, these estimates will change.  Still, they are useful in framing 2018 expectations.

In its May 2018 report, the Office of the Chief Economist released its first supply and demand estimates for the 2018/2019 marketing year.  For corn and soybeans, the marketing year begins on September 1 and ends on August 31.  Obviously, much is uncertain about the 2018/2019 year as planting is not yet complete, the critical yield forming months are still in the future, and much can change in the overall demand situation. Still, the May 2018 report contains useful information in forming expectations of 2018 revenue.  In the following sections, per acre crop revenue for the 2018/19 marketing year for corn and soybeans are given. These revenue estimates can be used to gain a beginning understanding of 2018 farm incomes. 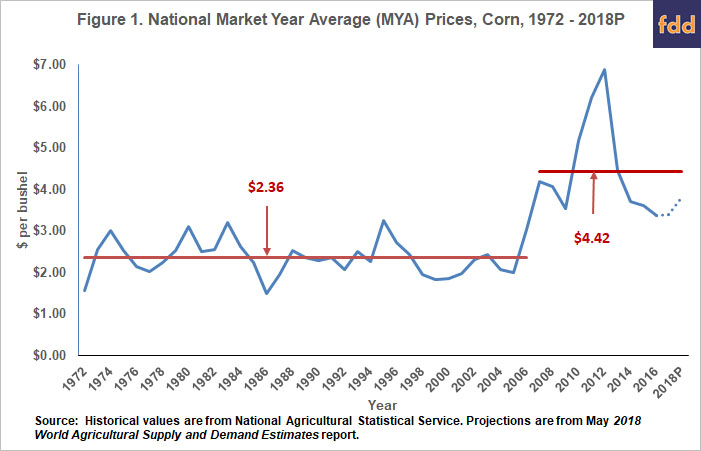 A U.S. average yield of 174 bushels per acre is used in the May 19th WASDE report. The 174 bushels per acre is based on a trend yield estimated using weather adjusted yields from 1988 to 2017 under the presumption of normal planting in 2018 (see footnotes on page 12 of May 2018 WASDE report). Figure 2 shows national corn yields from 1972 onward and the green line shows a linearly fitted trend line for data from 1988 to 2017.  While the trend values in Figure 2 are not weather adjusted, they result in roughly the same 2018 trend value as used in the May 2018 WASDE report. 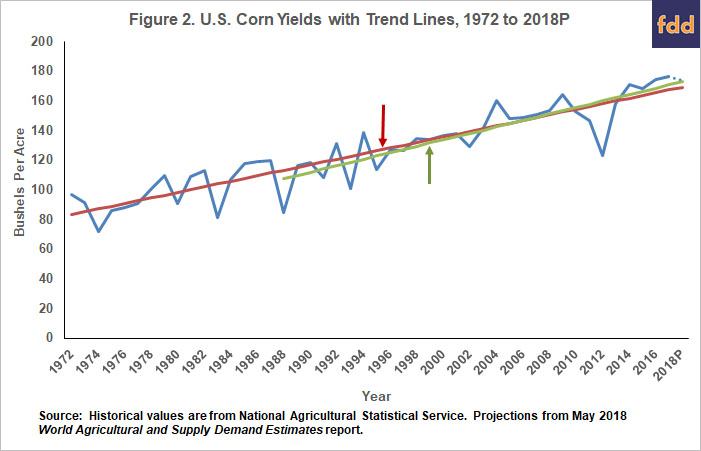 From 2014 to 2017, all U.S. corn yields were above trend.  During this period, corn prices were below $4.00 per bushel. Corn yields were below trend from 2010 to 2013, the period in which corn prices were above the $4.42 mean price for the 2007-2017 period.  There is a strong, negative correlation between actual-trend yield changes and price changes.  It is likely that a below trend yield in 2018 would result in a price above the $3.80 midpoint projection, and vice versa.

Figure 2 also includes a trend from 1972 to 2017.  That trend is relatively close to the 1988-2016 trend and is included to make a point about yield variability.  In the last 20 year, there have been relatively few yields below trend.  From 1998 to 2017, yields have been below trend in 6 years, or in 30 percent of the years.  For the 1972 to 1997 period, yields were below trend in 46 percent of the years.  Breeding, farming practices, and good growing conditions contribute to the fewer years below trend in recent years.  Whether this will continue is an open question.  History would suggest a period of more yield variability is not out of the question. 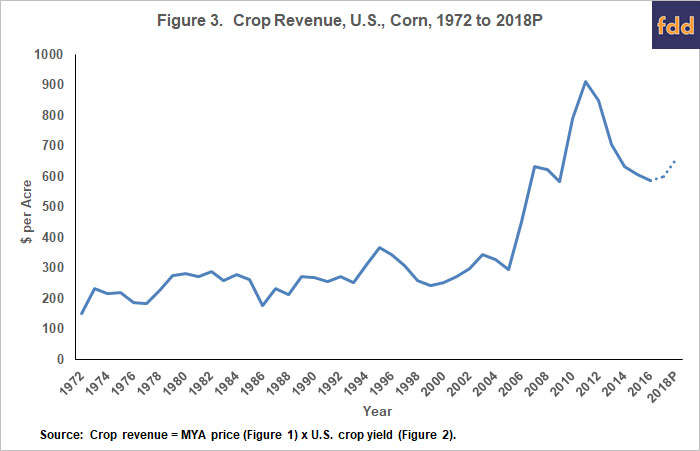 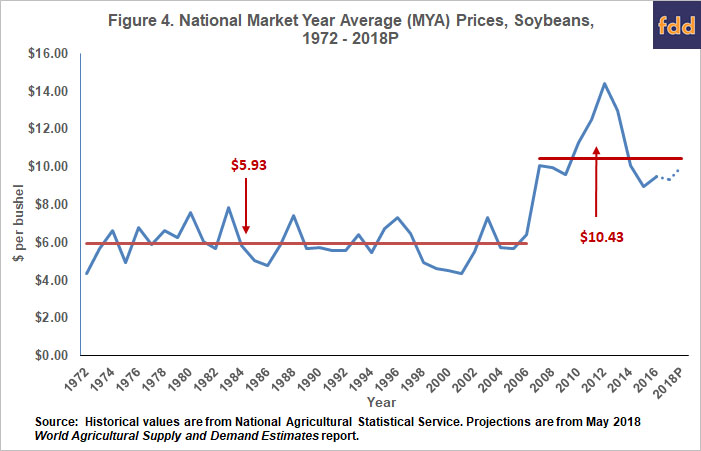 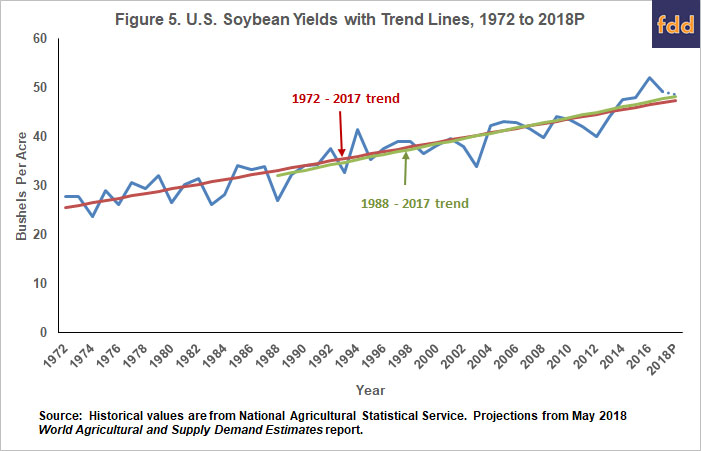 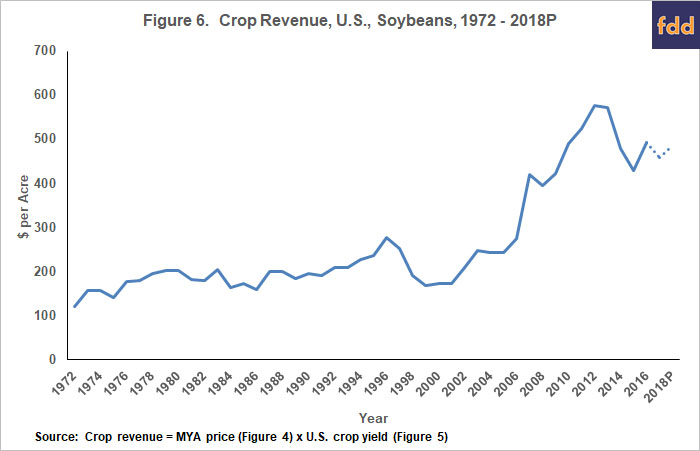 For corn and soybeans, midpoints of WASDE price ranges for 2018/2019 are higher than MYA prices in recent marketing years.  Using midpoint prices in combination with trend yields result in 2018 crop revenues that are above 2017 crop revenues, presenting some optimism for 2018 incomes.  Still, 2018 revenues are projected below 2007-2017 averages.  Moreover, commodity title payments likely will be lower for 2018 compared to recent years, offsetting a portion of the potentially higher crop revenues.

Still, there is a bit of optimism for 2018 incomes.  Obviously, much will be determined over the next several months as actual plantings and yields come into clearer focus.