In recent months, forecasts of 2017 Market Year Average (MYA) prices have increased.  Higher MYA prices will result in lower 2017 payments for the Agricultural Risk Coverage at the County level (ARC-CO) commodity title program (Price Loss Coverage (PLC) will be reduced as well).  We provide 2017 ARC-CO payment estimates using MYA price forecasts of $3.40 for corn, $9.35 for soybeans, and $4.70 for wheat, midpoints in the May 2018 WASDE report.  Few counties in Illinois are projected to receive 2017 payments on corn and soybeans.  Around half of Illinois counties will receive wheat payments.  National maps of payment estimates show few counties will receive payments for 2017 ARC-CO payments, except for wheat.  For fall cash flow planning, most Illinois farmers and landowners should budget for no or low ARC-CO payments.

Marketing years do not end until August for corn and soybeans, and May for wheat.  Therefore, exact market year averages are not yet known for corn, soybeans, and wheat.  As a result, MYA price forecasts must be used to estimate 2017 ARC-CO payments.

Each month, the Office of the Chief Economist of the U.S. Department of Agriculture releases the World Agricultural Supply and Demand Estimates (WASDE) report.  This report gives a range for MYA prices.  In this article, midpoints of these ranges are used as forecasts of the MYA price. 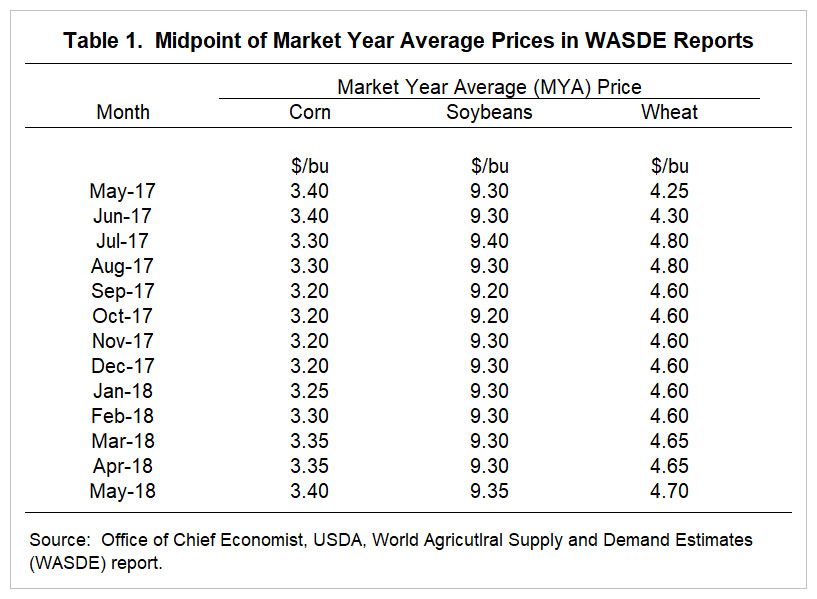 Payment estimates have been revised using MYA prices at the May 2018 WASDE midpoints.   Illinois estimates are shown in Table 1. These estimates are made using National Agricultural Statistical Service (NASS) yields, which may differ from the final yields used by the Farm Service Agency (FSA).   ARC-CO payments are reduced by a sequester of 6.8%.  Payments are reported on a per base acre basis, accounting for the fact that payments are received on .85 base acres.  If there are 100 corn base acres on an FSA farm, multiplying the per base acre payment in Table 1 by 100 should result in a payment estimate close to the final payment for that farm. 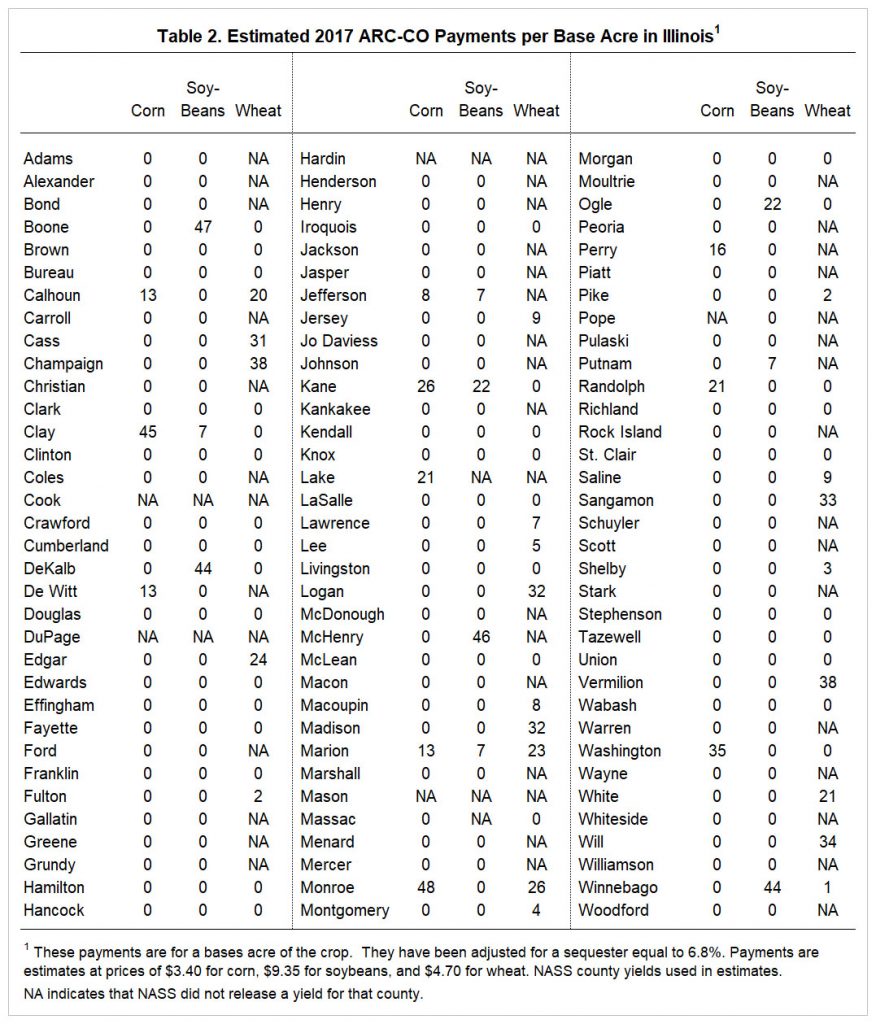 At a $3.40 MYA price forecast, most counties are not projected to receive 2017 ARC-CO payments for corn (see Figure 1).  Payments are forecast for a geographical concentration of counties in North and South Dakota, Oklahoma and Kansas, and Virginia. 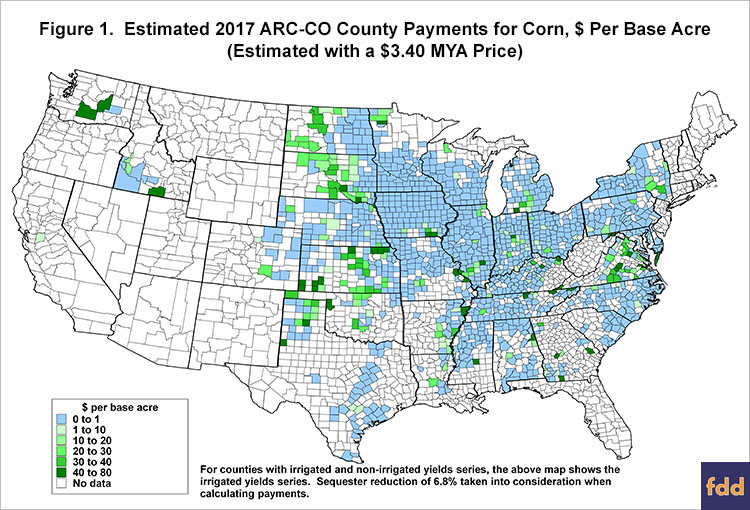 Geographical areas where ARC-CO will be expected to make payments for soybeans in 2017 include counties in western North and South Dakota; central Kansas; border counties along the Wisconsin-Illinois border; eastern Indiana, western Ohio, and Michigan; and western Pennsylvania (see Figure 2). 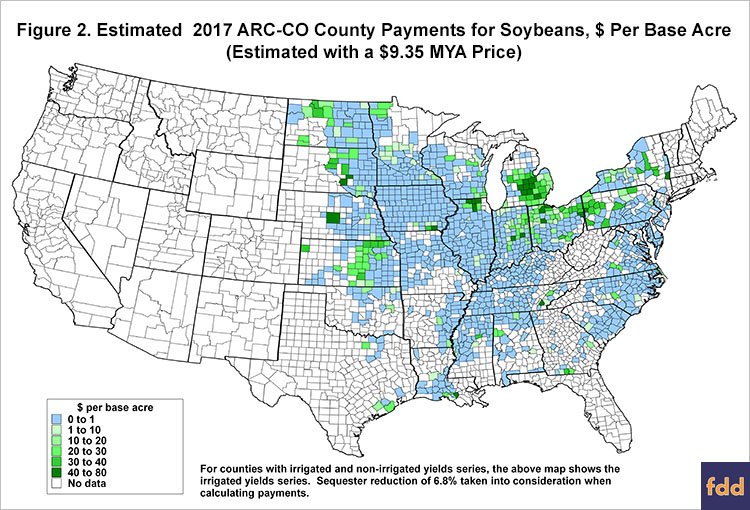 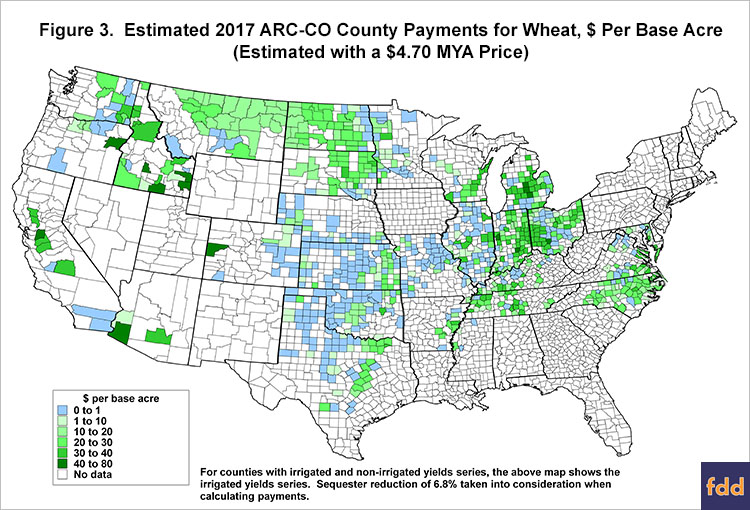 Even given the above caveats, farmers and landowners should plan for few ARC-CO payments this fall.