Historically, much of the farm program debate has been driven by concerns about low crop prices and a regional dispute about the best policy for addressing those concerns. This was a prominent feature of the debate that produced the 2014 Farm Bill; the Senate and Midwest sought revenue-based assistance, while the House and South sought to preserve fixed-price based assistance. As the current effort to reauthorize the farm bill progresses, this specific policy debate continues but in a much lower crop price environment. This article compares particular policy concepts for farm programs by reviewing at two versions of reference prices used for Price Loss Coverage payments: the version reported by the House Ag Committee and a recently-introduced bill by Senators John Thune (R-SD) and Sherrod Brown (D-OH), both members of the Senate Ag Committee.

Out of the heated and difficult Congressional debate that produced the Agricultural Act of 2014, farmers were given a choice between the Price Loss Coverage Program (PLC) and the Agriculture Risk Coverage (ARC). PLC is a traditional fixed-price policy, triggering payments when market year average (MYA) prices are below a statutorily-fixed reference price. ARC is a revenue-based program triggering payments when actual revenues (prices multiplied by yields) are below 86% of an historic benchmark revenue (5-year Olympic moving average of prices and yields). ARC is available using county average yields by crop or individual farm yields for all crops with base on the farm; both versions used national MYA prices. Most of the base acres for corn and soybeans elected ARC-CO while almost all of the base acres for peanuts and rice elected PLC; wheat base acres were split between the two programs (farmdoc daily, June 16, 2015).

The farm bill reported by the House Ag Committee continued the current farm programs Agriculture Risk Coverage, county level coverage (ARC-CO) and Price Loss Coverage (PLC) (for more detail, see farmdoc daily, April 26, 2018). Most notable about the House Ag Committee bill is that it appears designed to encourage farmers to elect PLC over ARC-CO. First, farmers who elected ARC-CO for a crop’s base acres are ineligible for area-wide crop insurance coverage on the crop; a notable conflation of Title I program support and crop insurance that could serve as a disincentive to elect ARC-CO. Second, PLC is revised to provide for an effective reference price and PLC payments are triggered when the marketing year average (MYA) price for the commodity in any crop year is below the effective reference price. 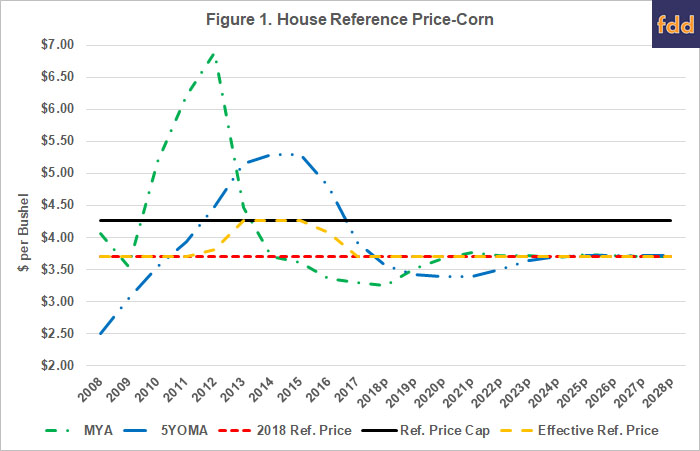 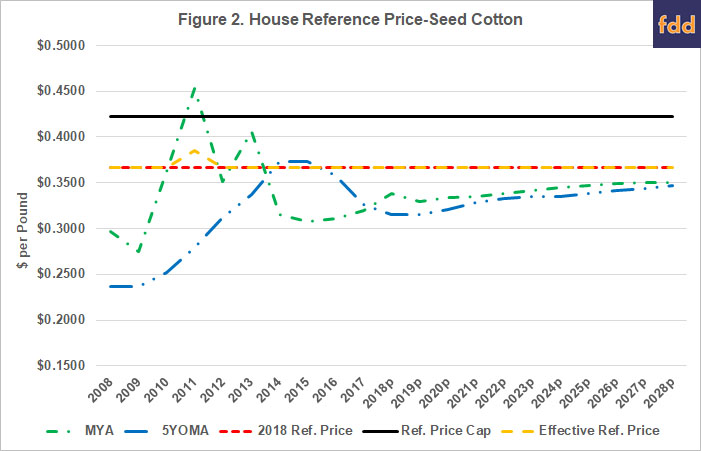 Ultimately the effective reference price determines whether a payment is triggered (i.e., MYA below effective reference price) and it determines the payment rate (i.e., the difference between the MYA and the effective reference price). The payment rate multiplied by the program yields determines the amount paid on 85% of the crop’s base acres. To provide further information about how this proposed provision in the House farm bill would operate, Figures 3a and 3b contain the estimated payment rate for each year for these crops beginning with the 2014 farm bill period through 2028. These figures add to the earlier discussion about the ability for Congress to effectively determine the size of payments under the 2014 farm bill for each of the crops depending largely on where it set reference prices relative to recent market prices (farmdoc daily, May 10, 2018 and May 3, 2018). These figures add further to the question of equity among crops and that this situation will likely continue with the proposed House farm bill. In particular, cotton, peanuts, and rice continue to receive large estimated payments while corn and soybeans receive little to no estimated deficiency payments after the 2014 farm bill ends. Thus, the proposed change in the House farm bill to the setting of reference prices only marginally addresses the equity issue of differentially set reference prices across these 6 crops. 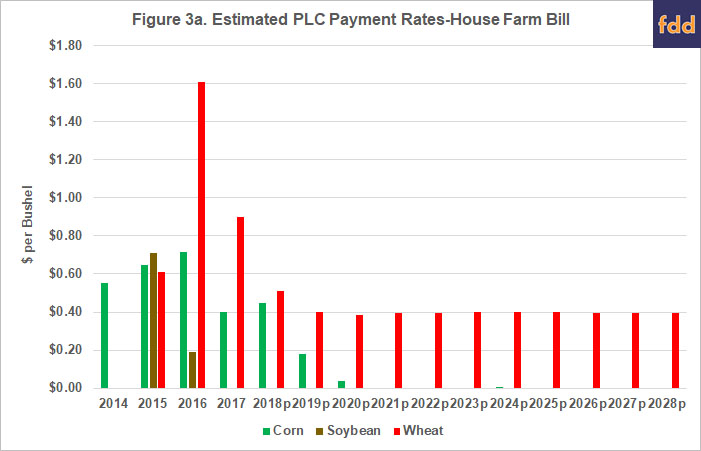 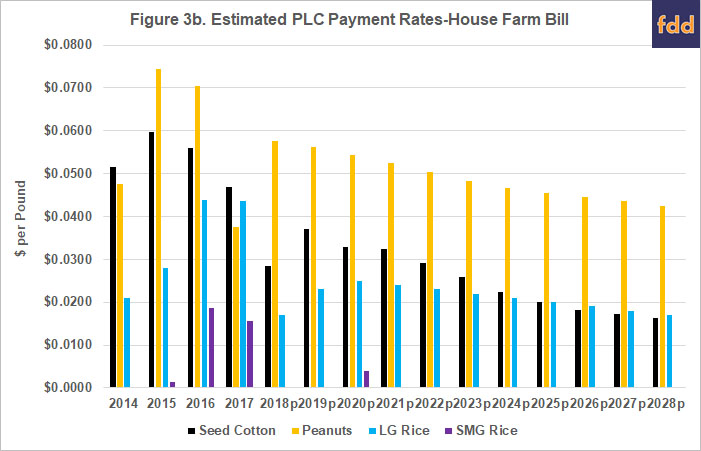 Proposed Revisions in the Thune-Brown Bill in the Senate

The Senate Ag Committee has yet to release draft text or mark up its version of the farm bill. To provide some measure of comparison, however, two members of the committee have introduced a bill that would revise farm program policy. On April 25, 2018, Senators John Thune (R-SD) and Sherrod Brown (D-OH) introduced a bill designed to improve the Agriculture Risk Coverage (ARC) program (Steever, April 26, 2018; Thune Press Release, April 25, 2018; Brown Press Release, April 25, 2018). While the bill emphasizes improvements to ARC, it also revises the calculation for reference prices in PLC. Given its role in the debate under current price scenarios, this difference in directions for price-based commodity policy–calculation of reference prices in PLC–will be explored further as a comparison to the direction taken thus far in the House. Analysis of the impact of proposed changes to ARC will be explored in a future article. 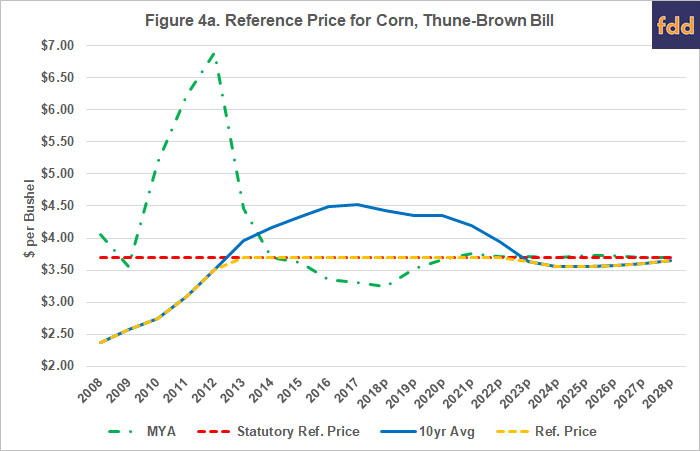 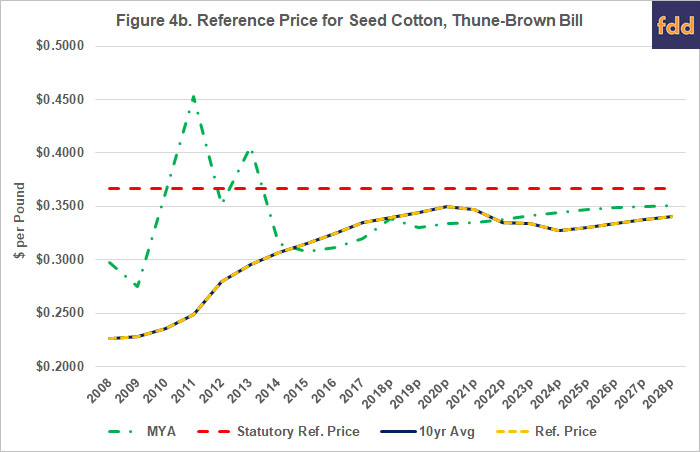 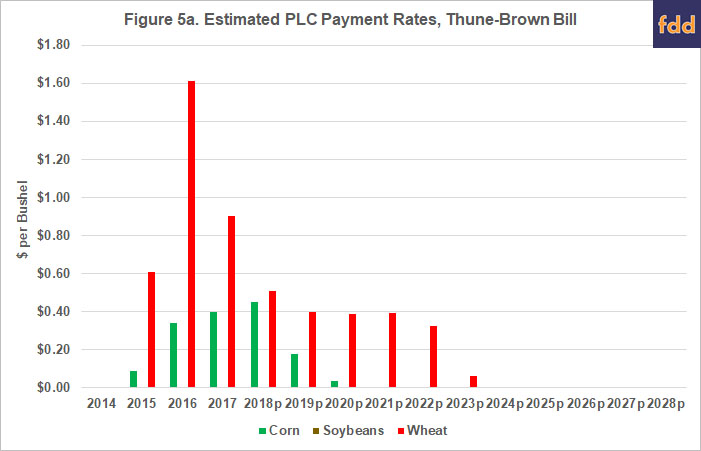 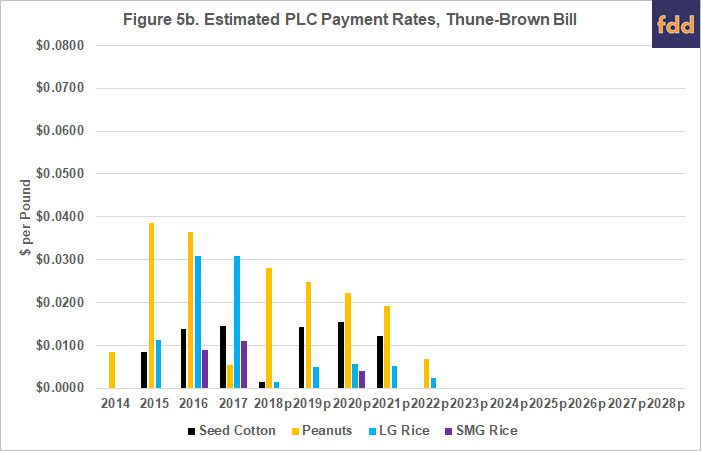 The bottom line of this particular policy disagreement can be most clearly understood by comparing the estimated PLC payment rates in the House version (Figures 3a and 3b) to the estimated PLC payment rates in the Thune-Brown version (figures 5a and 5b). Both versions of the program would’ve triggered payments in the years after 2014 as prices fell, but the House version would have triggered larger payments for seed cotton, peanuts and long grain rice. Moreover, the Thune-Brown bill payment rates adjust to the lower price scenario and payments would eventually end; the House bill would continue making payments every year throughout the baseline years for wheat, seed cotton, peanuts and long grain rice. The optimist looks at these competing versions for farm policy and sees the green shoots of compromise; a compromise that could produce a subtle shift in policy towards more market-oriented assistance with better transparency as well as improvements that produce more equitable and fair treatment among farmers. The pessimist sees another counterproductive dispute between nearly irreconcilable visions for farm policy. Continued progress through Congress may deliver answers on which view wins in the coming months.