The odds for a farm bill in 2018 have improved considerably.  On Wednesday the Senate Ag Committee moved its version of a farm bill with a strong bipartisan vote (20 to 1) (Senate Ag Committee, 2018 Farm Bill; Farm Policy News, June 13, 2018).  House leadership is attempting to resolve the immigration issue that contributed to the House Ag Committee’s farm bill defeat on the floor.  This may pave the way for a House vote reconsidering the farm bill, but success remains uncertain.  Among the issues that could present hurdles to completing a farm bill, one has gained particular attention thanks to a recent public dispute that was punctuated by Senator Grassley’s (R-IA) lone vote against the farm bill in the Senate Ag Committee:  eligibility requirements for, and limits on, farm program payments (Sarlin, June 5, 2018; Anderson, May 30, 2018).  This seemingly esoteric issue is traditionally one of the toughest to sort out in a farm bill debate.  It tends to have particular resonance on the House and Senate floors where perspectives outside of the agricultural sector weigh heaviest.  It is often one of the final matters resolved in conference.  As the farm bill moves to the Senate floor and the House possibly moves to reconsider its version, this article reviews this particular issue further with some historical background, the specific changes proposed and some political context.

Controversy has long enveloped Federal commodities support, beginning with the first payments made to farmers by the Agricultural Adjustment Act of 1933.  In 1936, Secretary of Agriculture Henry A. Wallace was forced by Congress to publish a list of payments under the AAA which revealed that one farm entity had received $318,000 in government payments in the first three crop years of the 1933 AAA (Nelson, 1974).  That farm entity was the Delta & Pine Land Company, the nation’s largest cotton plantation.  The controversy was magnified by the fact that a majority of its stock was owned by a British cotton textile corporation and the farm was managed by Oscar Johnston.  Mr. Johnston, a lawyer, banker and politician in addition to managing the cotton plantation, was also the finance director of the Agricultural Adjustment Administration that implemented the programs and made the payments.  He also managed the Federal Cotton Producer’s Pool and served as director and vice-president of the Commodity Credit Corporation.  This glaring conflict of interest and the size of the Federal payments his operation received provided political fodder for opponents of farm support policy, complicating Congressional efforts to resuscitate the policy in 1936 after the Supreme Court had struck it down.

In 1938, Congress added a $10,000 limit on soil-conservation payments but not price support programs and controversy continued to surround commodity support policy.  By 1970, the shift towards compensatory payments provided farm program critics with additional fodder, as they were able to track payments to individuals and large companies such as Standard Oil of California (Coppess 2018).  This led to the first payment limit crafted by the Ag Committees and included with the farm program authorizing legislation; previous limits had been attached by appropriations bills.  The 1970 Farm Bill contained a $55,000 limit on commodity support payments.  In 1987, a Government Accountability Office (GAO) report exposed abuse by some farm entities who were using passive investors and entity organization to circumvent payment limits (GAO 1987).  In response, Congress created a requirement that persons be actively engaged in farming to be eligible for farm program payments (farmdoc daily, April 8, 2015).

Problems and controversies have continued to plague farm programs, including a large database of payments published on the internet and a Washington Post investigative series that exposed payments to non-farmers for what were called “cowboy starter kits” (Morgan, Gaul and Cohen, Harvesting Cash 2006).  In 2013, GAO again exposed that some farm entities were abusing the eligibility requirements and suggested that Congress revise the actively engaged in farming requirement (GAO 2013).  Congress in the 2014 Farm Bill and USDA by regulation sought to address this issue further but a recent GAO report indicates that challenges remain (GAO 2018). The troubled historical baggage on the issue of payment limits and eligibility has the potential to again cause problems in the current farm bill debate; a key reason being the very different directions by the House and Senate on this topic.

The farm bill reported by the Senate Ag Committee continues existing payment limits of $125,000 for all commodities except peanuts, as well as the additional $125,000 limit for peanuts (S.3042, Agriculture Improvement Act of 2018).  In addition, S.3042 proposes to reduce the adjusted gross income (AGI) eligibility requirement from $900,000 to $700,000.  By comparison, the House Ag Committee has proposed multiple changes to existing law on payment limits and AGI eligibility requirements, which are discussed in detail in an attempt to better understand the issue.

First, H.R. 2 proposes to revise the definitions applicable to farm program payment limits and eligibility requirements.  It would add cousins, nieces and nephews to the current list of those individuals who can be considered a member of the farm operation.  It also adds a new term for a “Qualified Pass Through Entity” farm operation that is based on the tax code.  Adding family members would permit farm operations to increase the total payments received; each new family member would bring with them the potential for another $125,000 in payments.  The impact of adding qualified pass through entities will be discussed further below.

Second, H.R. 2 proposes to amend the specific $125,000 limit on the amount of assistance a farm can receive.  H.R. 2 would eliminate the inclusion in those limits of any gains from the Marketing Assistance Loan (MAL) program or any Loan Deficiency Payments (LDP).  The 2014 Farm Bill included those in the overall limit on Title I assistance to farmers.  Operationally, a farmer who received loan gains or LDP would have them applied first, and any farm program payments could be reduced to fit under the $125,000 limit.  As proposed by H.R. 2, farmers would be subject to the limit only for payments from Price Loss Coverage (PLC) or Agriculture Risk Coverage (ARC).  This would be expected to permit farmers to receive more in direct assistance:  unlimited loan gains or LDP; $125,000 for ARC or PLC payments.  Note that H.R. 2 also does not alter the separate payment limit for peanuts, permitting farms with peanut base to receive up to $125,000 for peanuts in addition to a limit of $125,000 for all other crops. 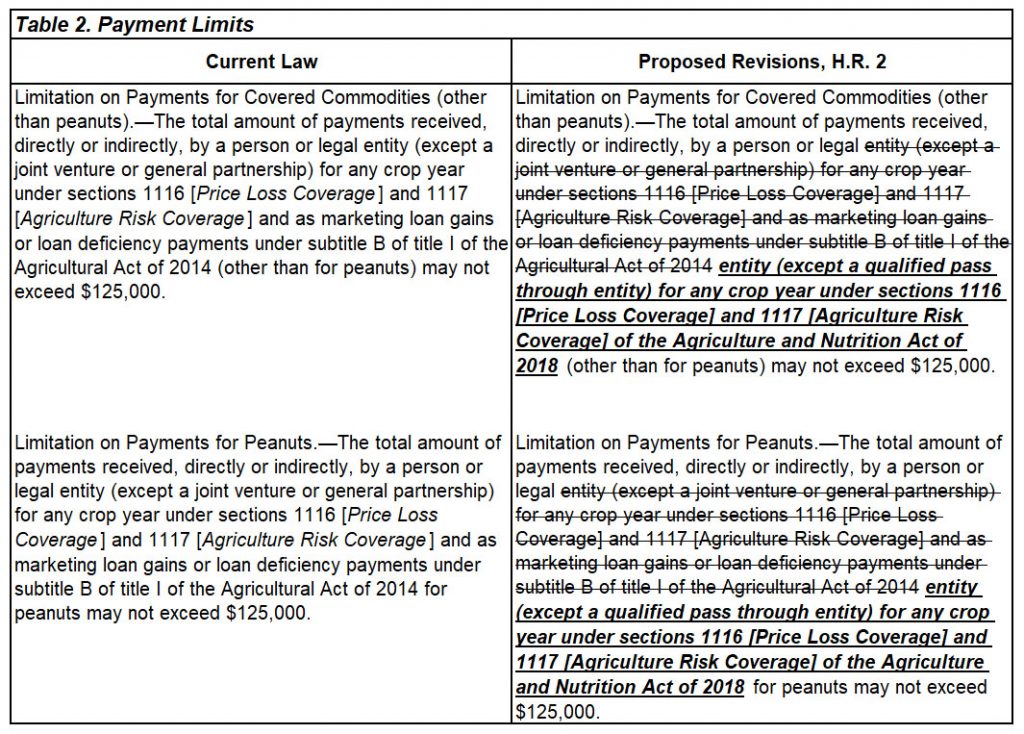 A key component of the payment limit issue are the differences in payments for each of the covered commodities.  Farm program payments are made using historic base acres that are decoupled from the actual planting of the crop; payments are made on base regardless if the crop associated with the base was planted.  Moreover, payments are made on 85% of the total base acres for the crop, known as payment acres.  Figure 1 estimates payments per payment acre for each of the main covered commodities, using the total direct cash payments in the Congressional Budget Office Baseline (CBO April 2018 Baseline).  Note that CBO has not provided an estimate of seed cotton base used for the new program and the calculations in Figure 1 estimate seed cotton base at 80% of the total generic base acres, which were former upland cotton base acres (for more information on this issue, see farmdoc daily, February 14, 2018). 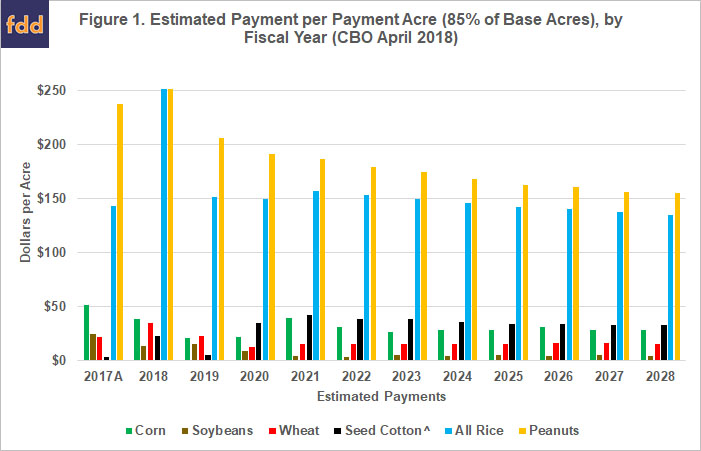 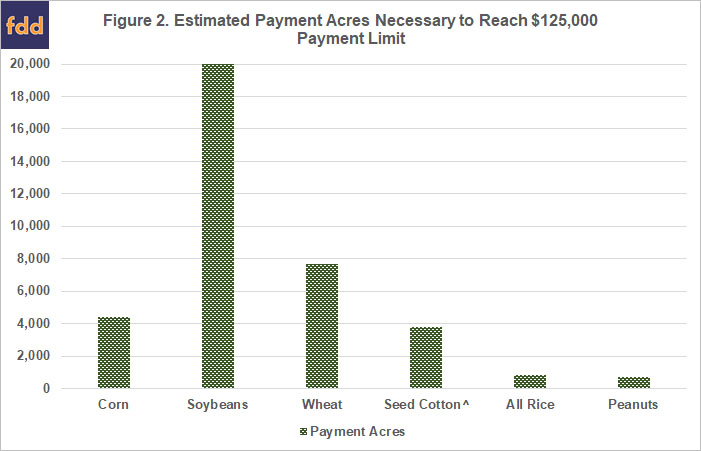 H.R. 2 proposes other revisions to these provisions.  Generally, all payments to a legal entity are required to be attributed to an actual person or persons who have direct or indirect ownership interest in the farm operation receiving the payments.  If a person is involved in multiple farm entities, the payments are totaled across the entities for purposes of that person’s payment limit.  Moreover, a legal entity is generally subject to the payment limits but there is an exception for joint ventures and general partnerships.  Entities that are joint ventures or general partnerships are permitted an entity limit equal to the individual limit ($125,000) multiplied by the number of legal entities or persons that make up the ownership of the joint venture or general partnership.

H.R. 2 proposes to open this exception to cover all qualified pass through entities rather than just joint ventures and general partnerships.  If a farm operation is a sole proprietorship it can only receive one payment limit for all commodities other than peanuts, and a separate limit for peanut base.  As proposed by H.R. 2, if that same farm operation reorganizes as a qualified pass through entity it can increase the total amount of payments for each person or legal entity it adds to the operation. 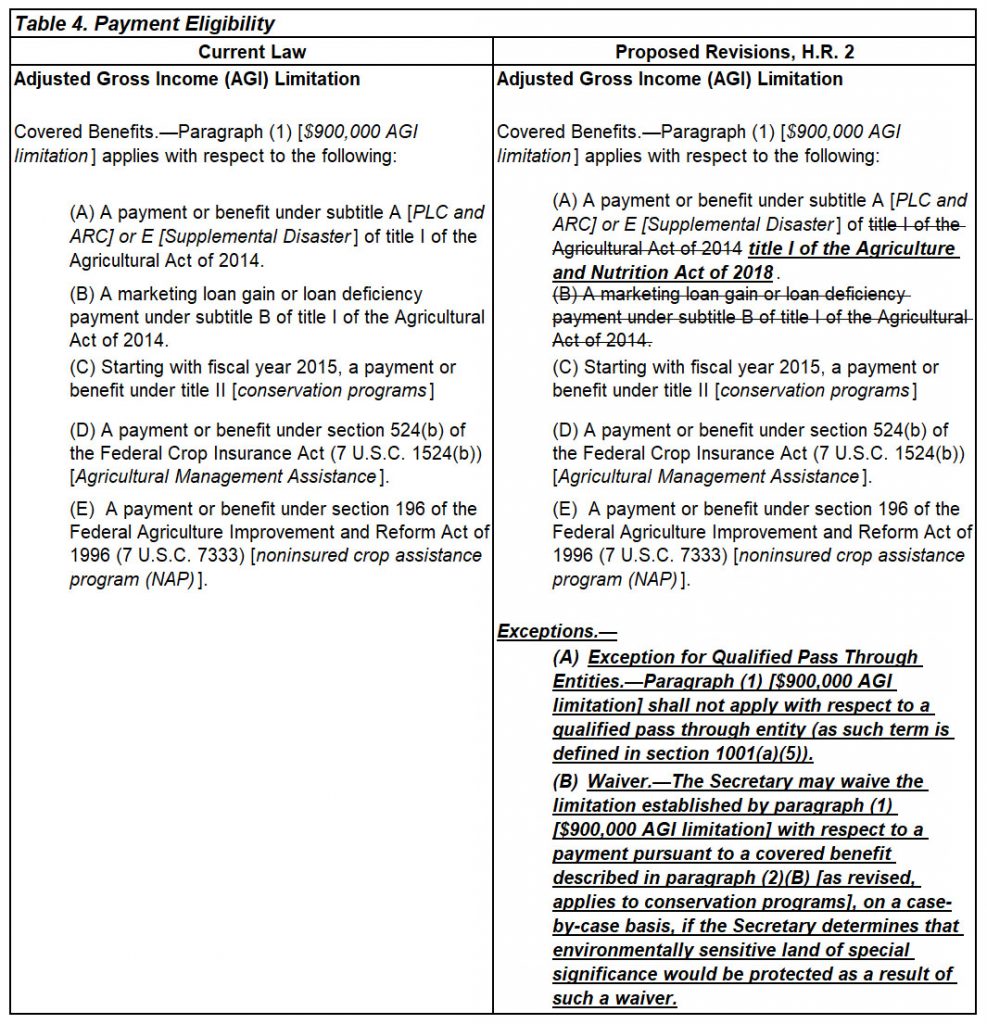 Farm bill progress in the Senate has the potential to create momentum for completing reauthorization but potential hurdles remain.  Looking ahead to a potential conference negotiation, there are numerous differences to work out between the House and Senate versions of the farm bill.  The most prominent involve the House’s proposals for the Supplemental Nutrition Assistance Program (SNAP) and conservation policy, as well as for farm program design.  Among them, the issue of farm program payment limits and eligibility requirements stands out.

First, it is an issue with a long, troubled history that is traditionally difficult to resolve; intertwined with commodity policy, it generally aligns with long-running regional disagreements.  Simply put, higher reference prices for some commodities trigger larger payments which, in turn, fuels opposition to payment limits from those receiving the larger payments and objections from those who do not.  The issue of large payments to certain farmers is particularly salient to non-farm interests who are likely to be more engaged and bring greater political influence on the House and Senate floors. It could receive substantial attention in the upcoming Senate floor debate which could impact success for the bill in that chamber, as well as any conference negotiations should the House pass its version of the bill.

Second, while farm payment limits and eligibility requirements have challenged farm bill debates for decades the current controversy is magnified by a notable imbalance in the House Ag Committee proposals.  The bill in the House proposes to make it easier for farmers to collect more and larger payments while cutting conservation spending (including eliminating the Conservation Stewardship Program).  But it also proposes to spend as much as $13 billion on additional bureaucratic barriers for SNAP participants.  This substantial investment of funds was estimated by the Congressional Budget Office to result in over a million fewer people receiving food assistance at a time when an improving economy is reducing participation and spending.  It is the comparison to its treatment of SNAP that is likely to cause the most political problems for a farm bill because of the difficulty in reconciling fewer burdens on farm payments with billions in additional burdens on low-income persons seeking assistance to purchase food.  If there is to be a farm bill in 2018, these appear to be its most obvious hurdles.

Coppess, J., The Fault Lines of Farm Policy:  A Legislative and Political History of the Farm Bill, University of Nebraska Press, forthcoming, December 2018