Recent farmdoc daily articles have examined trends in liquidity measures for farms in Illinois and Kansas (July 20, 2018 and August 10, 2018).  In general, liquidity improved from 2007 to 2012, and then declined.  This article used data from three farm management associations and USDA-ERS to further explore trends in the current ratio.  In addition, differences in the current ratio among farms are examined.

To examine trends in the current ratio, data from the Illinois FBFM program, the Kansas Farm Management Association (KFMA), the University of Minnesota, and USDA-ERS were utilized.  The Illinois FBFM data was reported in annual reports.  The KFMA data included annual data for crop farms, crop/beef farms, and beef farms.  The FINPIN database, generated by the Center for Farm Financial Management at the University of Minnesota, were used to obtain current ratio data over the sample period.  It is important to note that data for all the farms in FINBIN, rather than data for a specific farm type, was utilized.  Data for all U.S. farms were obtained from the USDA-ERS Farm Income and Wealth Statistics website.

Liquidity thresholds are typically used by analysts to determine whether a farm has an adequate liquidity position.  A current ratio above 2.0 is considered adequate and would typically be sufficient to weather a one to two year downturn in margins.  A farm with a ratio below 1.0 is not able to cover their current liabilities by selling all of their current assets, and therefore may have trouble repaying loans. 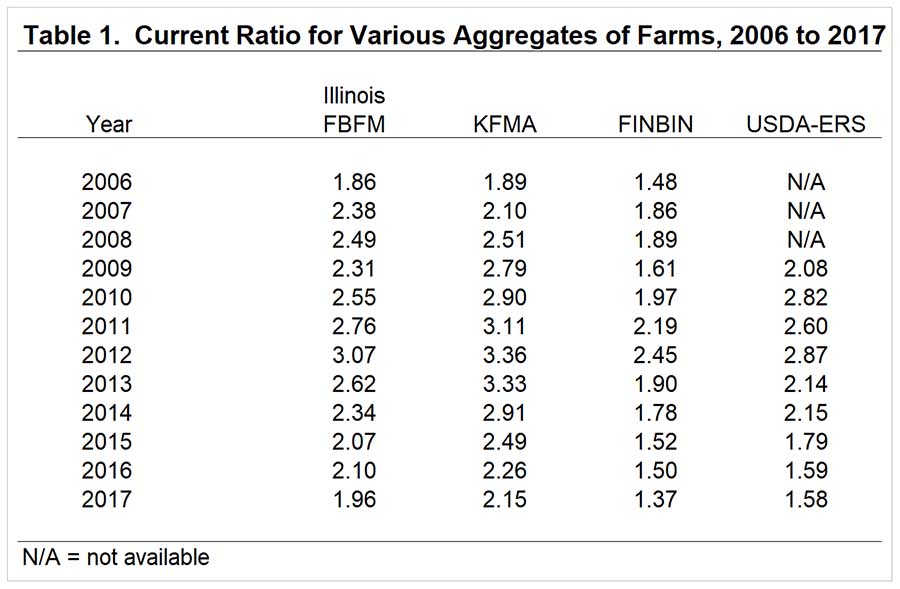 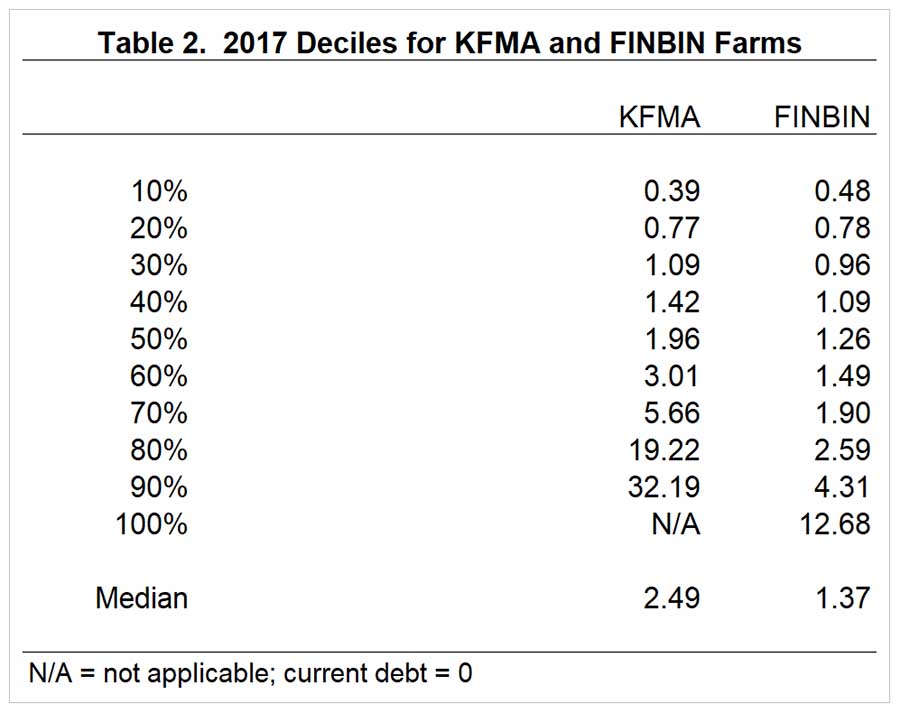 USDA-ERS projects that the average current ratio in 2018 for all U.S. farms will be 1.49, down from an average current ratio of 1.58 in 2017.  In general, liquidity measures in 2018 will depend on a multitude of factors including crop prices and yields, weather, and other factors, all of which are inter-related.  Using current futures prices adjusted for basis, trend yields, and projected government payments; we expect the percentage of farms below the critical liquidity thresholds to increase in 2018.

Langemeier, M. and A. Featherstone. "Examining Trends in Liquidity for a Sample of Kansas Farms." farmdoc daily (8):149, Department of Agricultural and Consumer Economics, University of Illinois at Urbana-Champaign, August 10, 2018.

Zwilling, B., B. Krapf and D. Raab. "Cash Is King – Revisited." farmdoc daily (8):134, Department of Agricultural and Consumer Economics, University of Illinois at Urbana-Champaign, July 20, 2018.