Revenues will be projected for high-productivity farmland in central Illinois. These 2018 projections will be compared to previous average gross revenues for farms enrolled in Illinois Farm Business Farm Management (FBFM). Table 1 shows the components of gross revenue projections, including crop revenue, Market Facilitation Program (MFP) payments, ARC/PLC payments, and crop insurance. Projections are made for both corn and soybeans with both stated on a per acre basis. 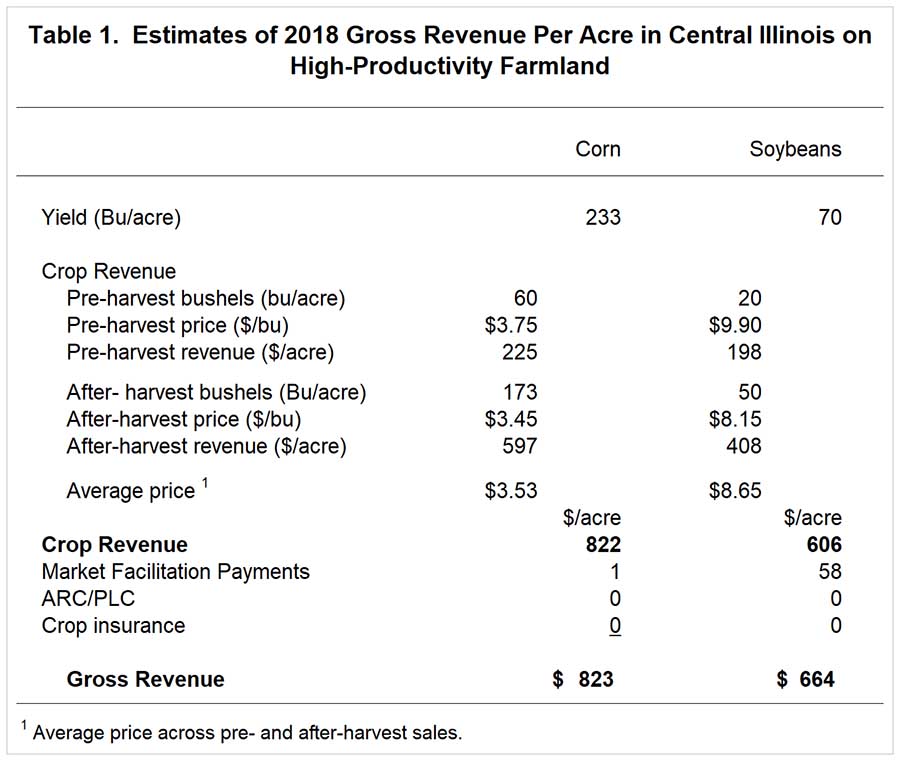 USDA estimates of state yields provide the basis for projecting record-breaking yields. In August, the National Agricultural Statistical Service (NASS) estimated Illinois state yields at 207 bushels per acre for corn and 64 bushels per acre for soybeans (Crop Production, August 2018). Both these yields are at all-time highs and continue a string of years with above trend yields (farmdoc daily, September 5, 2018). NASS will release revised state yields on September 12. No matter the September 12 and future revisions, yields will be exceptional across much of Illinois.

This year, a factor that will cause variability in crop revenue across farms will be the amount of pre-harvest hedging. Grain prices before June were much higher than current cash bids, and likely will be higher than any price for the remainder of the marketing year.

Projections in Table 1 assume that roughly one-third of expected production was pre-priced before June: 60 bushels per acre for corn and 20 bushels per acre for soybeans. The one-third estimate is based on results from a survey of farmers in May (farmdoc daily, May 15, 2018). Prices used for pre-harvest grain are $3.75 for corn and $9.90 for soybeans, the average of forward bids during the first five months of 2018.

The remainder of the crop — labeled as “after-harvest” bushels in Table 1 — is priced at $3.45 per bushel for corn and $8.15 per bushel for soybeans. These prices are higher than current cash bids and assume storage with some increases in prices.

Average prices over pre- and after-harvest grain than are $3.53 per bushel for corn and $8.65 per bushel for soybeans (see Table 1). Those averages are much higher than current cash bids because of prices used on pre-harvest bushels. Those farmers that had fewer pre-harvest bushels likely will have much lower average prices in 2018, closer to the current levels of cash bids.

Based on those projected yields and average prices, crop revenue is estimated at $822 per acre for corn and $606 per bushel for soybeans.

The Farm Service Agency (FSA) has announced details of the Market Facilitation Program (MFP), a program designed to partially compensate farmers for losses resulting from trade disputes. Effective rates of $.005 per bushel for corn and $.825 per bushel for soybeans will be paid on bushels produced in 2018 (for more detail, see farmdoc daily, August 28, 2018). For the central Illinois case, a 233 bushel per acre yield results in a $1 MFP payment ($1 = 233 x $.005). The projected soybean payment is $58 per acre (70 yield x $.825 effective rate).

The $58 per acre projected payment for soybean has positive impacts on gross revenues, representing 9.5% of crop revenue. The rates announced by FSA are initial rates. There is a possibility, but not the guarantee, of another payment on 2018 production sometime in the future.

Most farmers in Illinois take Revenue Protection (RP) which makes payments if harvest revenue is below guaranteed revenue. In 2018, projected prices are $3.96 for corn and $10.16 for soybeans. Current futures levels suggest harvest prices near $3.65 for corn and $8.45 for soybeans. Corn prices have declined 8%, and soybean prices have declined 17%. If actual yields equal the trend-adjusted APH yields used in calculating revenue guarantees, the corn price has not fallen enough to trigger RP payments at the 85% coverage level (see Table 2). Soybean price has declined enough to trigger payments. However, yields are at record levels, resulting in actual yields that likely will offset price declines on most farms. For this reason, crop insurance payments for both corn and soybeans is projected at $0 per acre. 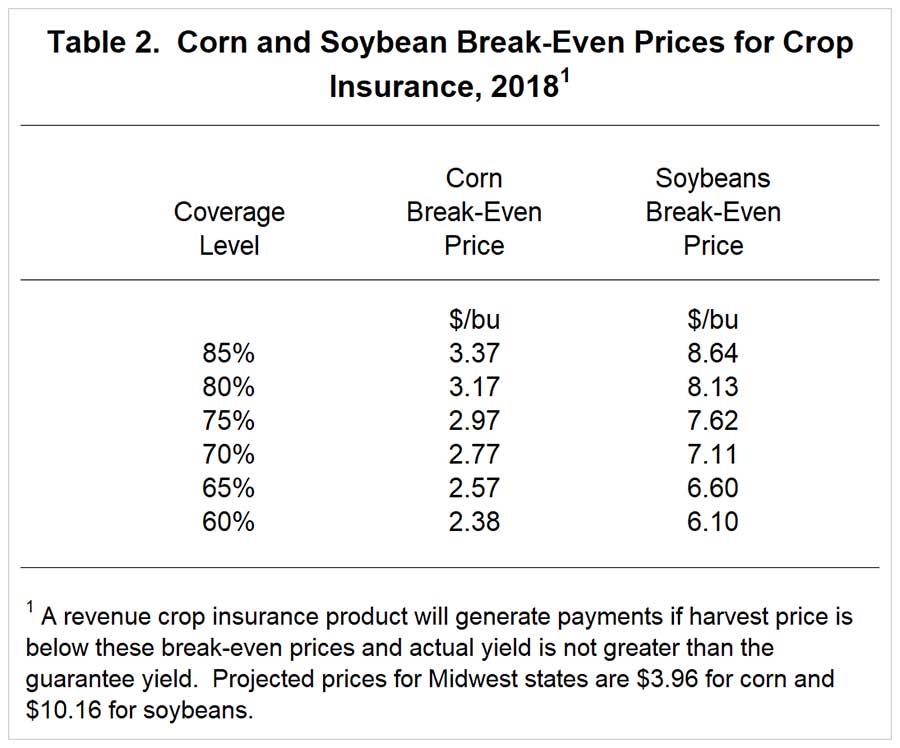 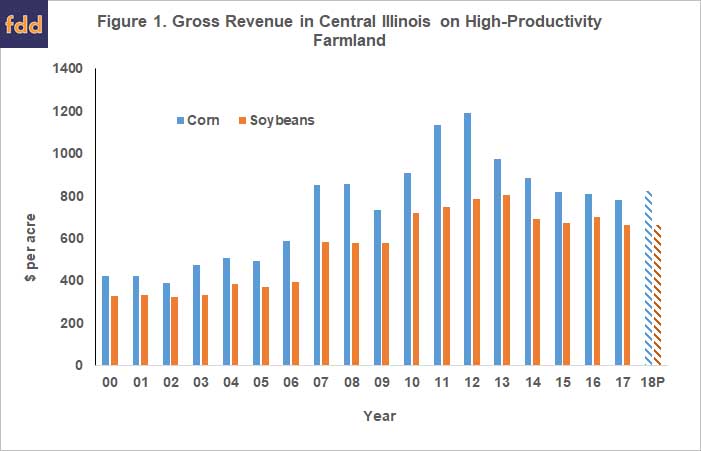 Gross revenues near 2017 levels are predicated on three factors:

Projections developed in this paper represent averages. Some farmers will be higher while other farmers will have lower revenues. Key determinants of whether a farmer will be above or below average are:

Recent projections of high yields and MFP payments suggest that many farmers will have gross revenues close to 2017 levels, particularly those that did some pre-harvest hedging. Estimates shown in this paper will change as yields come into clearer focus and prices change. In addition, there will be some farmers that have lower gross revenue than experienced in 2017.

Schnitkey, G. "Revenue and Costs for Corn, Soybeans, Wheat, and Double-Crop Soybeans, Actual for 2011 through 2017, Projected 2018." Department of Agricultural and Consumer Economics, University of Illinois at Urbana-Champaign, May 15, 2018.