Prudent pre-harvest hedging reduces risk, particularly if it is done in conjunction with the purchase of revenue crop insurance having the Harvest Price Option (HPO) option.  Recent criticism of crop insurance suggests that amendments could be placed in the farm bill to curtail HPO coverage. As a result, understanding farmers pre-harvest hedging activities is important at this time.  A survey of Midwest farmers was conducted to understand how much pre-harvest hedging is done. Survey results indicate that farmers use what can be termed prudent hedging strategies prior to harvest for marketing their crops.  The initial survey results also indicate that farmers would likely reduce pre-harvest hedging if HPO is eliminated.  Hence, Congressional efforts to limit HPO would increase risks to farmers.

Surprisingly little information exists concerning how farmers use pre-harvest marketing strategies such as forward contracting and futures contracting (generally referred to as pre-harvest hedging).  As a result, a simply survey was developed that asked farmers about their pre-harvest hedging practices; an initial step in analyzing this risk management strategy and the crop insurance HPO issue.  The survey was administered by the Illinois Corn Growers Association, and a number of state corn growers’ associations contacted their members to complete the electronic survey.  A total of 194 survey responses were completed, with 70% of the responses coming from Illinois.  The remaining surveys came from Indiana, Iowa, Kentucky, Missouri, Nebraska, North Dakota, Ohio, Oklahoma, Texas, and Wisconsin.

The survey focused on the amount of 2018 corn production that was hedged prior to April 1, 2018.  Respondents were instructed that pre-harvest hedging included the use of forward contracts and use of future contracts.

Pursuant to a forward contract, a farmer agrees to deliver grain to a country elevator or processor at some point in the future, often near harvest time, but based on futures market prices at the time of the contract.  This legally-binding contract locks in the price for the delivered grain as a hedge against lower prices at the time of delivery.  While advantageous to the farmer in terms of protecting against lower prices, it also comes with risks that prices will increase, often as a result of lower yields for the crop nationally.  In extreme situations, a farmer with significant yield losses may not have enough bushels to fulfill the contractual obligations and will need to purchase bushels to make delivery; bushels purchased in such a situation could well be at a higher price than the farmer contracted.

HPO is designed to provide protection in those cases when yields are low and prices rise.  HPO calculates guarantees based on the higher of the projected and harvest price.  The “higher of” is the HPO feature, causing guarantees to increase when harvest prices are above projected prices.  Common insurance products that include HPO are Revenue Protection (RP) and Area Revenue Protection (ARP), policies that are typically used on more than 90% of insured acres (farmdoc daily, May 8, 2018).

Future contracts are conceptually similar to forward contracts.  For the typical hedge, a farmer sells a futures contract at some point prior to harvest.  To offset this hedge, a futures contract is purchased sometime in the future.  In years in which widespread yield shortfalls occur, prices increase and farmers are purchasing futures contracts at higher prices.  HPO, again, provides protection for these situations.

Hedging of Expected Production on April 1 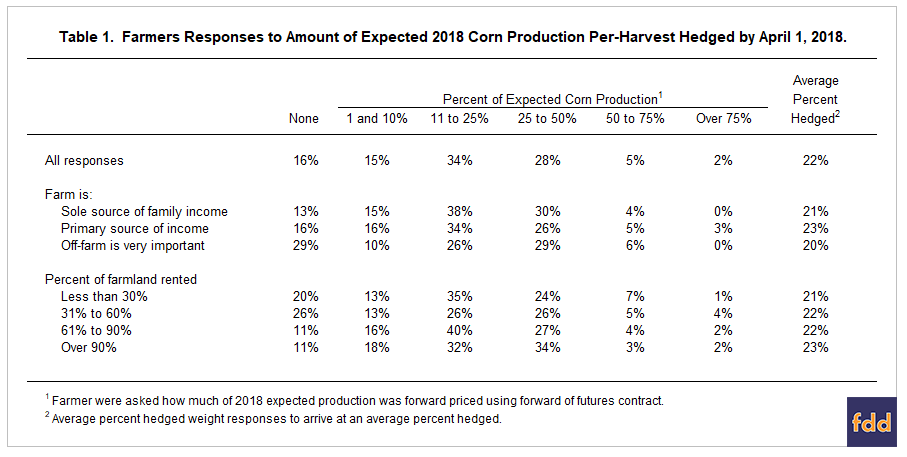 An “average percent hedged” was calculated for the respondents based on their categorical responses. For example, 0% hedged was given to the 16% of respondents that indicated that no forward pricing had taken place.  Those farmers responding that between 1 and 10% of their expected production hedged were weighted at 5.5% percent hedged, the midpoint of the 1 and 10% ranges.  This process was repeated for all categories and a weighted score was calculated.

For all respondents, 22% of 2018 expected production was hedged as of April 1.  For those that did hedge, somewhere between 11% and 50% of expected production typically has been hedged.  These amounts seem prudent. Farmers are not hedging a large amount of production as there still remains time to pre-harvest hedge and planting has not taken place.  Moreover, acreages could be lower than expected if poor planting weather occurs.  Furthermore, yield uncertainty is unresolved such that hedging large percentages of expected production could result in more grain priced than is actually produced. These hedging amounts are consistent with pricing at multiple times of the years and “spreading” sales.

Impacts of Farm Structure on Risk

To better understand linkages between hedging and risk, farmers were asked to place themselves in categories based on the following question: “How significant of a role does your farm income play in covering your family living expenses?”  Three responses were allowed:

Off-farm income serves as a way of diversifying income.  We expect that farmers who rely heavily on farming operations for family living will use other risk mitigating strategies to offset risk as off-farm income cannot be used to substitute for farm income.  As a result, per-harvest hedging is expected to be higher for those farms primarily relying on farming for their family living expenses.

Overall, the percent of farms relying heavily on farm incomes for family living likely is higher in this survey than it likely would be in a random survey of farms.  This is attributed to survey respondents being members in a corn growers association which implies a significant involvement in farming.

Farmers also were asked how much of their land base was rented.  Higher risks may be associated with more of the farm base being rented.  Therefore, use of pre-harvest hedging may increase as percent of farmland rented increases.  Categorical responses were:

As expected, most of those surveyed had over 60% of the farmland in their operation rented.  These values are fairly typical for commercial-sized grain farms as reported in Illinois Farm Business Farm Management.   These percentages likely are higher than for a random survey of farmers.

Overall, percent of farmland rented had impacts on pre-harvest hedging. One could speculate that risk increases with a higher proportion of farmland rented and that the additional risk could lead to more pre-harvest hedging.  It is likely that the above results would be more pronounced with more refined measures of the riskiness of the farmland base.  Additional items such as percent cash and share rented, costliness and fixity of cash rent levels, and length of tenure relationships are important in determining the riskiness of the farmland base.

Forward Pricing by Time of Year

Farmers were also asked if the amount of 2018 corn production hedged by April 1 was typical. Of those that responded, 71% indicated that their 2018 expected production hedged was about the same as it usually was, 12% indicated less, and 17% indicated more.  These responses suggest that values shown in Tables 1 and 2 are representative of a typical year.

Reductions in Hedging without Revenue Protection

Survey respondents were asked if they took Revenue Protection (RP) or Area Risk Plan (ARP) insurance. Both of these insurance coverages have the harvest price option (HPO).  Of the respondents, 91% of the respondents took RP or ARP insurance.  This high percentage is as expected given the high use of RP (see farmdoc daily, May 8, 2018).

As Congress proceeds with debating a farm bill this year and amendments relating to crop insurance are offered, the following articles may be of interest: