The Agriculture Improvement Act of 2018 (2018 farm bill) gives FSA (Farm Service Agency) farm owners a 1-time option to update PLC (Price Loss Coverage) payment yields.  Of 21 program commodities, only corn, soybeans, upland cotton, and, especially sorghum have a US national PLC yield that is higher with the 2018 than the 2014 farm bill update formula.  This outcome reflects (a) features of the yield update formula specified by Congress and (b) yield-affecting events during the respective update periods of 2013-2017 and 2008-2012.  Prior farmdoc daily articles of 1/17/2019 and 2/7/2019 have examined the important impact of crop rotation on PLC update yield.

Yields are per planted acre.  The US yield ratio (2nd term in formula) cannot be less than 0.90 nor more than 1.00.  If all other factors are the same, the update formula implies an FSA farm will benefit from the update if its average yield increased more than US average yield from 2008-2012 to 2013-2017.

Rationally, an owner will decide to update PLC yield only if the update yield generated by the formula above exceeds the existing PLC yield.  This decision rule framed all previous updates, including the 2014 farm bill update.  The 2014 yield update formula was:

Examining PLC yields at the national market level, US yield per planted acre is computed for each year from 2008 to 2017 for each program commodity using data from QuickStats (US Department of Agriculture).  The 2014 and 2018 US update yields are calculated using the formulas in the preceding section.  The 2 yields are compared, in essence, assuming the 2014 update yield is the existing PLC yield.  See Data Note 1 for additional discussion of the procedures. 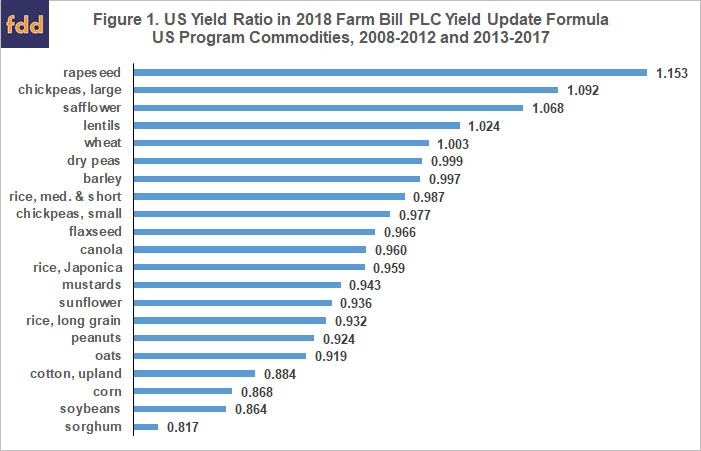 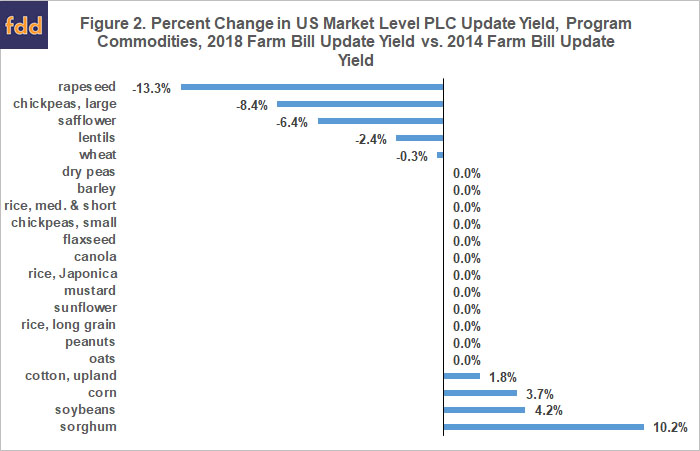 The House of Representatives initiated discussion of a PLC yield update by permitting an update in any area that had a D4 (exceptional) drought in the US Drought Monitor for at least 20 consecutive weeks in calendar years 2008-2012 (farmdoc daily, 10/2/2018 and 1/17/2019).  The yield update formula contained in the enacted 2018 farm bill may also generate higher 2018 than 2014 update yields for crops that had (a) a low US average 2008-2012 yield for reasons other than drought, or (b) a high US average 2013-2017 yield.  To further explore this point, regression analysis is used to estimate a linear yield trend for crop years 1993-2017.  This is the longest period of data for all program commodities except large and small chickpeas.  For these 2 crops, a linear trend is estimated using their available data (2003-2017).  Percent deviation of a year’s yield from its linear trend is calculated.  Average percent deviation is then calculated for the 2008-2012 and 2013-2017 update windows.  See Data Notes 2-4 for further discussion of this analysis.

For 8 of the 42 update window observations (19%), actual yield deviates from trend yield on average by more than 5%, ranging from -8.8% for sorghum to +19.4% for rapeseed, both occurring in 2008-2012 (see Figure 3).  All 4 crops with a higher 2018 than 2014 US update yield had average yields below trend in 2008-2012.  Sorghum, soybeans, and corn also had average yields above trend in 2013-2017.  Upland cotton had average yield below trend in both update windows, but especially 2008-2012.  Interestingly, oats and mustard do not have a higher 2018 than 2014 update yield despite having trend yield deviations comparable to the 4 crops with higher 2018 update yields.  It is not clear why this situation exists, but it is probably related to the estimation of trend yield. 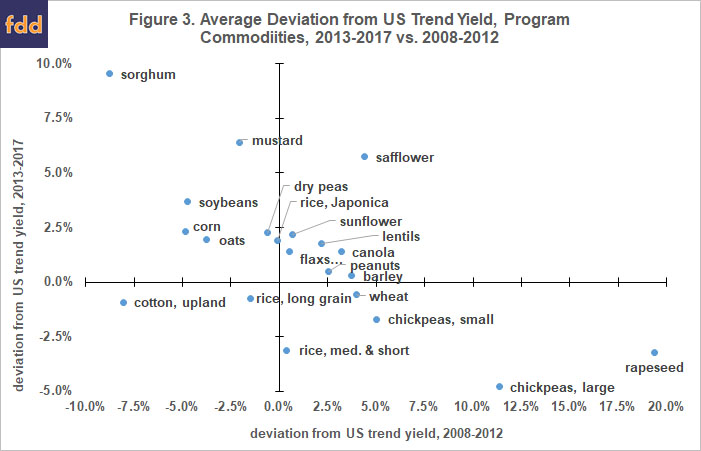