This is the 4th article in a series examining the 2018 farm bill PLC (Price Loss Coverage) yield update option.  A 2/20/2019 article found that, of 21 program commodities, only corn, soybeans, upland cotton, and, especially sorghum have a US national PLC yield that is higher with the 2018 than with the 2014 farm bill update formula.  This article continues the analysis of these 4 crops by examining the yield update by state.  The other farmdoc daily articles in this series (1/17/2019 and 2/7/2019) examine the important impact of crop rotation on PLC update yield.

Yield is per planted acre.  The US yield ratio (2nd formula term) cannot be less than 0.90 nor more than 1.00.  If all other factors are the same, the update formula implies an FSA farm will benefit from the update if its average yield increased more than US average yield from 2008-2012 to 2013-2017.

Rationally, an owner will decide to update PLC yield only if the above formula generates an update yield that exceeds the existing PLC yield.  This decision rule framed all previous updates, including the 2014 farm bill update.  The 2014 yield update formula was:

State yield per planted acre is computed for each year from 2008 to 2017 using data from QuickStats (US Department of Agriculture).  The formulas in the preceding section are used to calculate 2014 and 2018 update yields.  The 2 yields are compared, in essence, assuming the 2014 update yield is the existing PLC yield.  Data Note 1 contains added discussion of procedures. 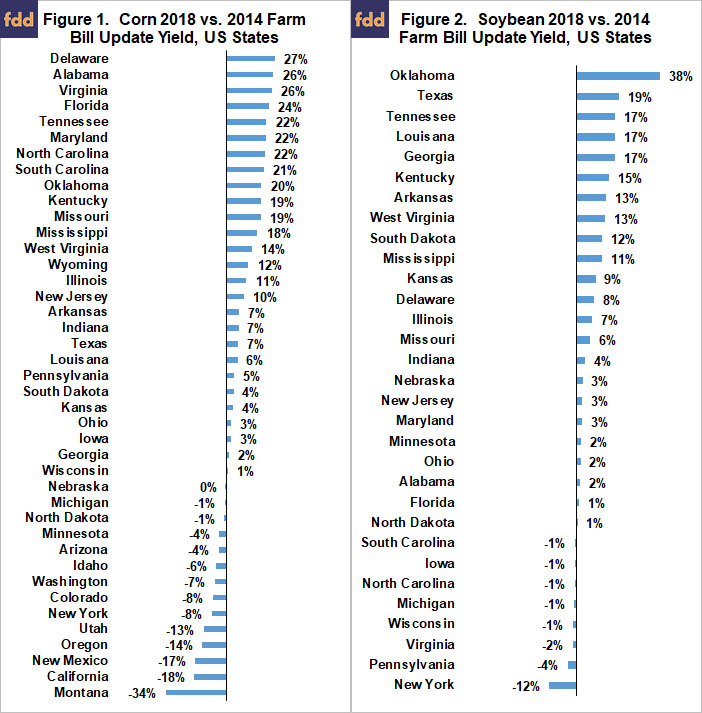