In the original article (see farmdoc daily, February 20, 2015) we looked at the ten-year period from 2004 to 2013, which saw higher crop prices, higher costs, and greater expense election limits.  In this article, we will add the what’s and when’s of capital purchases from 2014 to 2017.  This is period of lower incomes but with continued higher levels for the expense election limit.  What have these changes done to capital purchases?  To determine this, we looked at capital purchases made by farms enrolled in Illinois Farm Business Farm Management (FBFM) from 2004 to 2017.  This study contains all types of entities, but the purchases are based on the calendar year when they were acquired, not the entities fiscal year.  For this study, we are defining capital purchases as items purchased to be used by the farm business and that fall into two categories, buildings or machinery.

What Is Being Purchased?

For buildings, the top three assets purchased are field tile, grain and feed bins and machine sheds.  Tile was thirty-four percent of the total number of building purchases while bins and machine sheds were fourteen and eleven percent, respectively.  When looking at tile as a percent of total building purchase, it has been increasing.  The average for the period from 2004 to 2008 was twenty-seven percent.  This increased to thirty-six percent for the period from 2009 to 2013.  From 2014 to 2017, the average is thirty-nine percent.  When looking at these same periods of time for grain bins and machine sheds, we see that machine sheds have not changed much, however the percent for the number grain bins purchased has be decreasing.

Figure 1 contains the top five machinery purchases by number of purchases.  The other group includes assets that do not fit into the defined descriptions such as GPS equipment, seed tenders, header carts, conveyors and farm utility vehicles.  The other group has declined since 2013 because FBFM add more asset categories so those purchases can be now broken out with better detail.  Tractors averaged eleven percent of the total number of machinery purchases from 2004 to 2017.  However, when broken into periods of 2004 to 2008, 2009 to 2013 and 2014 to 2017, the percentages are 11, 13 and 9 respectively.  When we look at the top 5 asset purchased by dollars purchased, the top three assets are tractors, combines and heavy general purpose trucks in that order. 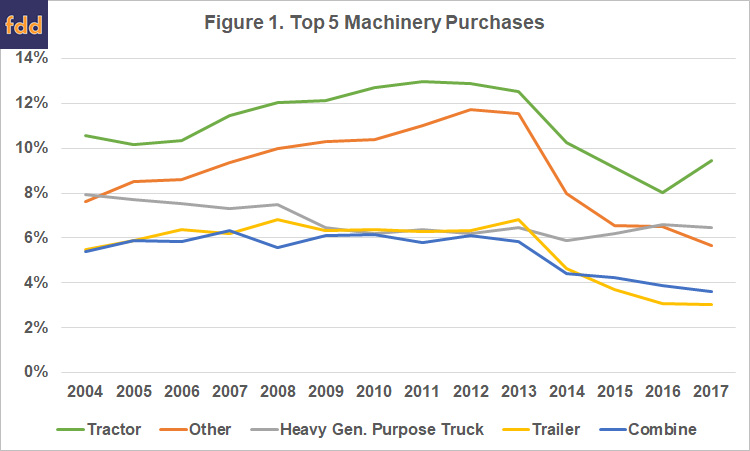 When Are Purchases Being Made? 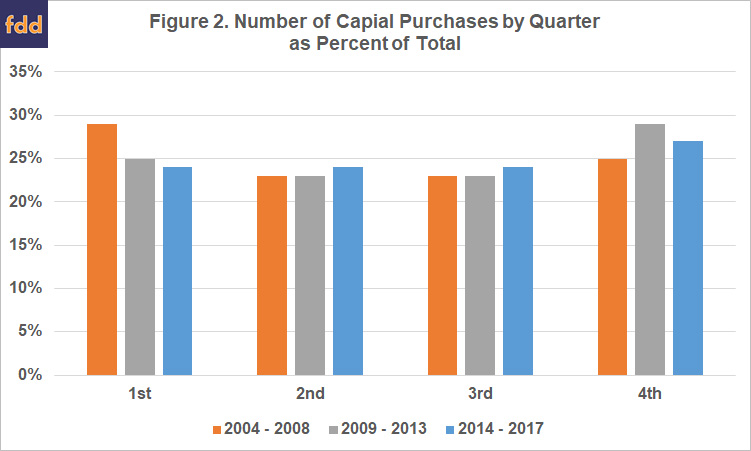 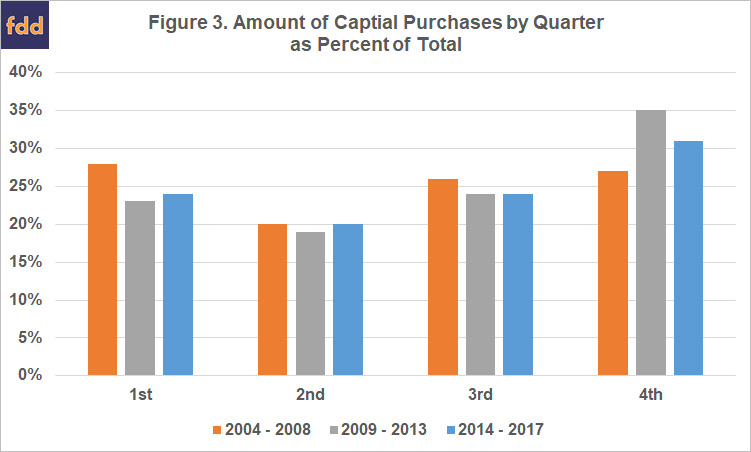 From 2004 to 2017, we have seen many changes in agriculture.  These changes have not had a large impact on the types of items most frequently purchased by farms enrolled in Illinois Farm Business Farm Management.  The top purchases were the same in 2004 as they were in 2017.  However, when we look at when the capital purchases are made, we see some changes.  From 2014 to 2017, capital purchases are leveling back out but with the larger amount of purchases still being made in the last quarter of the year.  Over the time period of this study, December has primarily been the month with the highest number of purchases as well as the highest amount spent on purchases.  Some of the reasons for the increase in the period from 2009 to 2013 are higher farm incomes and increasing of the expense election to $500,000 for every year since 2010.  The higher expense election has allowed capital purchases to be utilized at the year-end to help farmers optimize their income tax liability.  However, from 2014 to 2017, we have had lower incomes, but the amount and number of purchases in the last quarter of the year only decreased slightly even though the expense election amount stayed the same.

The author would like to acknowledge that data used in this study comes from the local Farm Business Farm Management (FBFM) Associations across the State of Illinois.  Without their cooperation, information as comprehensive and accurate as this would not be available for educational purposes.  FBFM, which consists of 5,600 plus farmers and 60 professional field staff, is a not-for-profit organization available to all farm operators in Illinois.  FBFM field staff provide on-farm counsel with computerized recordkeeping, farm financial management, business entity planning and income tax management.  For more information, please contact the State FBFM Office located at the University of Illinois Department of Agricultural and Consumer Economics at 217-333-5511 or visit the FBFM website at www.fbfm.org.

Zwilling, B., B. Krapf and D. Raab. “What’s and When’s of Capital Purchases.” farmdoc daily (5):32, Department of Agricultural and Consumer Economics, University of Illinois at Urbana-Champaign, February 20, 2015.