This article examines payments by the 2018 Market Facilitation Program (MFP) in the context of its objective to compensate US farms for tariff-related losses.  Potential implications for future farm safety net policy are drawn, especially in light of a 2019 MFP 2.0 program with an expanded set of crops.  Among potential implications are the likelihood of a 2020 MFP, a return to land retirement programs, and growing pressure to rewrite farm safety net programs.

Payments by MFP 1.0 are for tariff-related losses based on gross trade losses estimated using an international trade model benchmarked to 2017 trade flows (US Department of Agriculture (USDA), Office of the Chief Economist (OCE)).  A principle concern is damage incurred by US farms from China’s imposition of tariffs on its imports of US farm products in response to tariffs imposed by the US on imports from China.  The counter-tariffs raise the price of US farm exports, shifting China’s imports to other exporters, notably South America.  Since supply is relatively fixed, especially in the short run; US exports will shift to importers normally supplied by South America.  The shifting flow of trade means total US exports, not exports to China is the metric of interest.

Precise dating of the impact of China’s counter-tariffs on US farm prices is difficult.  As carefully documented by Swanson, Coppess, and Schnitkey; on April 2, 2018, China implemented tariffs on $3 billion of U.S. imports, including some farm products, in response to the March 22 announcement of US tariffs on $50 billion or so of Chinese goods.  Tariff-related announcements, implementations, and negotiations continued throughout April and May, including an April 4 announcement by China of a potential 25% import tariff on a list of 106 US products.  The list included soybeans, corn, ethanol, sorghum, and beef.  While prices moved up and down over this period, by the end of May corn and soybean prices were near March 1 levels.

Figure 2 presents the change in total US exports for MFP 1.0 commodities after the release of the May 2018 WASDE.  These changes will subsequently be referred to as post-tariff changes.  For 5 of the 7 MFP 1.0 commodities in WASDE, post–tariff changes were less than 5% of total US exports reported in the May 2018 WASDE.  Double digit declines in exports have however occurred for sorghum (-29%) and soybeans (-11%).  Note, the change is calculated for combined exports over 2 crop or calendar years to capture the shifting forward of US exports to avoid tariffs.  Such shifting was widely reported for US soybean exports to China. 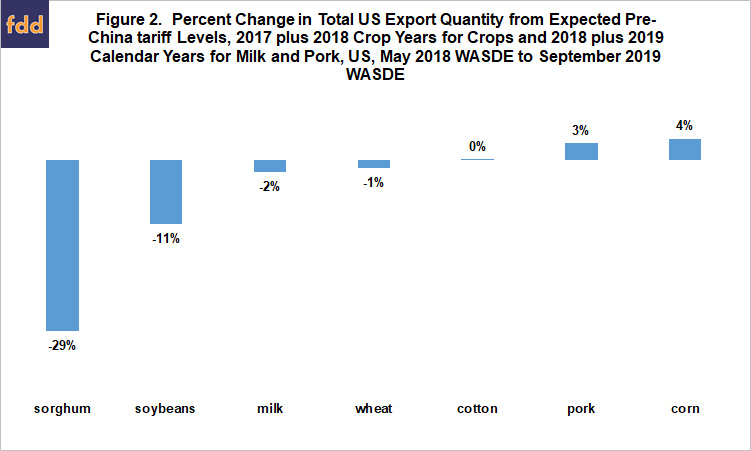 MFP 1.0 Payments vs. Change in Exports 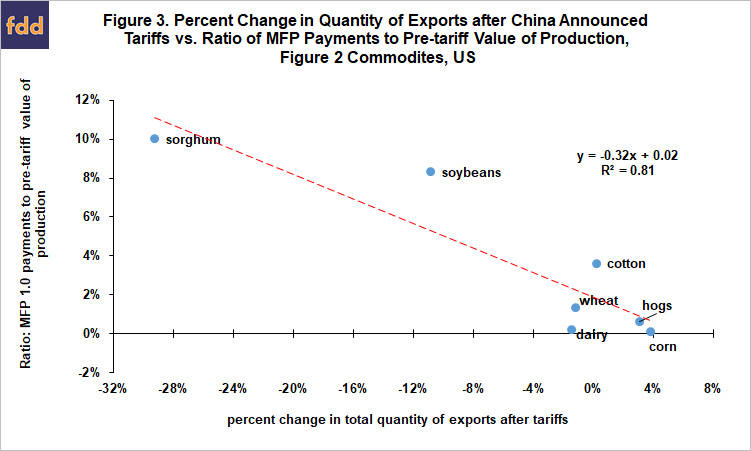 MFP 1.0 Payment vs. Change in Value of Production 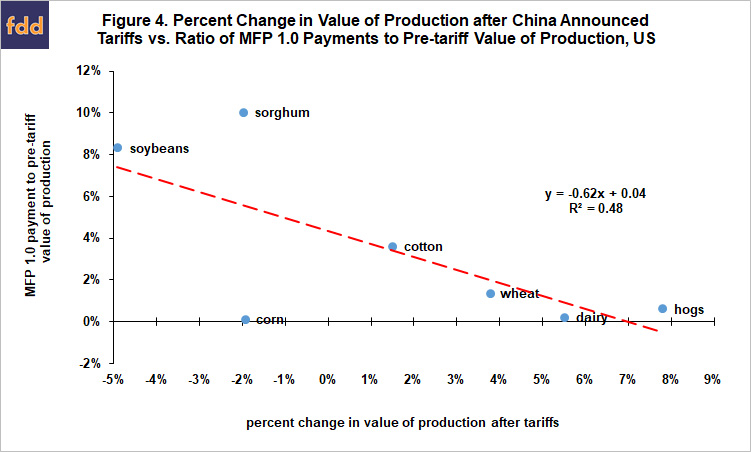 Sorghum and corn are notable because they deviate the most from the line in Figure 4.  Removing them from Figure 4 increases R2 (explanatory power) to 94% (see data note 1).  Several explanations exist for the outlier nature of sorghum and corn in Figure 4, but the most reasonable is cross-commodity impacts.  Sorghum and corn are feed grain substitutes, but sorghum accounts for only 2% of the combined value of production of these two crops.  Thus, changes in the price of corn matter more for changes in the price of sorghum than do changes in sorghum market factors, such as exports.  Corn prices are also closely linked to soybean prices by competition for acres across the US.  Thus, despite a 5% increase in corn exports over pre-tariff level (see Figure 2) largely due to drought in Argentina, corn price declined -5% from pre-tariff expectations as the soybean price decline of -15% from pre-tariff expectations spilled over into the corn market.

Deterioration in Exports over Time

Impact of tariffs on US exports is expected to increase over time as other countries increase production in response to higher prices and net returns.  In the case of US corn and soybean exports in 2019, an additional negative factor is the recovery of production in Argentina from the severe drought that impacted their 2018 corn and soybean crops.  WASDE forecasts for US exports have in general continued to decline since May 2018.  Figure 5 illustrates this continuing decline using the May 2018, December 2018, and September 2019 WASDEs.  The December 2018 WASDE roughly splits the period in half.  Except for pork, exports decline more or increase less over the May 2018 – September 2019 WASDEs than over the May 2018 – December 2018 WASDEs.  Increase in pork exports is the same over both periods.  The continuing decline in exports is largest for milk and corn [9 percentage points:  milk (7.0% – (-2%)); corn (13% – 4%)]. 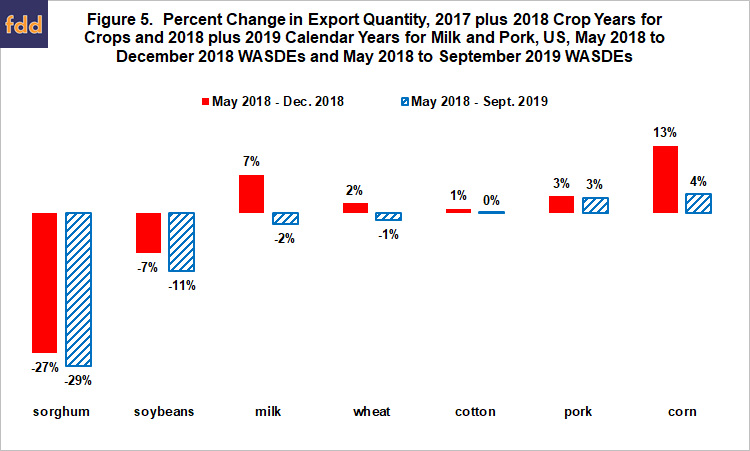 US Department of Agriculture, Office of the Chief Economist.  “Trade Damage Estimation for the Market Facilitation Program and Food Purchase and Distribution Program.”  September 13, 2018.  https://www.usda.gov/oce/trade/USDA_Trade_Methodology_Report_2018.pdf

US Department of Agriculture, Office of the Chief Economist.  August 30, 2019.  World Agricultural Supply and Demand Estimates:  May 2018, December 2018, August 2018.  https://www.usda.gov/oce/commodity/wasde/index.htm