This is a presentation summary from the 2019 Illinois Farm Economics Summit (IFES) which occurred December 16-20, 2019. A complete collection of presentations including PowerPoint Slides (PPT) and printable summaries (PDF) are available here.

So much happened that it is really hard to know where to begin when telling the story of Illinois agriculture in 2019.  The craziness has its roots in early 2018 when the Trump Administration began applying tariffs to a variety of goods, with China being the main target.  This in turn prompted China to impose retaliatory tariffs on a long list of imported goods from the U.S., including soybeans.  The negative impact on U.S. soybean prices that started in June 2018 is well known, as is the Market Facilitation Program (MFP1) that was announced in August 2018 to compensate farmers for their trade-related losses.  The remainder of 2018 was largely the story of the latest rumor/leak/story about trade negotiations between the U.S. and China.

As the calendar turned to 2019 some optimism was in the air that a trade deal with China could be worked out, and this helped support grain prices.  However, these hopes were dashed in April as the trade talks faltered and eventually ended without a trade agreement.  The two sides began raising tariffs again.  As the accompanying charts show, this development along with expectations for relatively large planted acreage for corn and soybeans pressured grain prices into mid-May.

At this point, something that had been brewing for some time caused a major rally in grain prices.  The U.S. Corn Belt experienced an extremely wet spring planting season that really was just a continuation of record levels of precipitation that started the previous fall.  Planting delays in the eastern Corn Belt were particularly severe, with Illinois not reaching 50% planting progress for corn until early June.  Nothing like this had occurred in Illinois during the last 60 years.  The widespread planting delays raised the prospect of both reduced planted acreage and reduced yields.  December 2019 corn futures prices rallied to just under $4.75 per bushel and November 2019 soybean prices rallied to $9.40 per bushel by mid-June in the face of these U.S. supply concerns.

A major question confronted by Illinois and other eastern Corn Belt farmers in June was how many remaining acres to put into prevent plant available under most crop insurance policies or plant the acres to corn and/or soybeans.  This decision was complicated by the late May announcement of a second round of Market Facilitation Payments (MFP2) for 2019 crops.  When the program was announced, USDA officials indicated that the MFP2 payments would only be available on planted acres.  This meant that  prevent plant acres were excluded from the program.  The messaging on this issue quickly became muddled as the USDA received considerable pushback.

With the enormous uncertainty surrounding planting decisions at this late date in the season, USDA acreage estimates played an even larger role than normal in helping set market price direction.  To the near universal disappointment of farmers, June and August USDA estimates showed that corn planted acreage did not decline as much as expected.  The August USDA Crop Report was an especially large bearish surprise, with corn prices dropping by over $0.40 per bushel in the days following the release of the report. In fact, the bearish surprise was the largest in the last 55 years.  In light of this fact, it probably will come as no surprise that there was widespread disbelief in the USDA corn acreage and production estimates following the August report.

While final estimates will not be released until January, the August estimates are likely to turn out to be more accurate than many initially assumed.  The USDA not only surveys farmers but also has planted acreage reported to the Farm Service Agency of the USDA at its disposal.  This data supports the published USDA estimates.  In the end, it appears that farmers chose to maximize both planted corn acreage and insured prevent plant corn acres.  While this resulted in a very large reduction in soybean planted acreage, soybean stocks were so large to begin with that the reductions could be absorbed without much if any additional price pressure.

Weather the remainder of the U.S. growing season turned out to be reasonably good in many areas, and this lessened the potential negative impact of late planting on corn and soybean yields.  The end result was that both corn and soybean markets broke very hard after the release of the USDA August Crop Production report and never really recovered.

The rollercoaster ride that was 2019 for Illinois agriculture will not soon be forgotten.  Hopefully, the lessons learned will be valuable in the future. 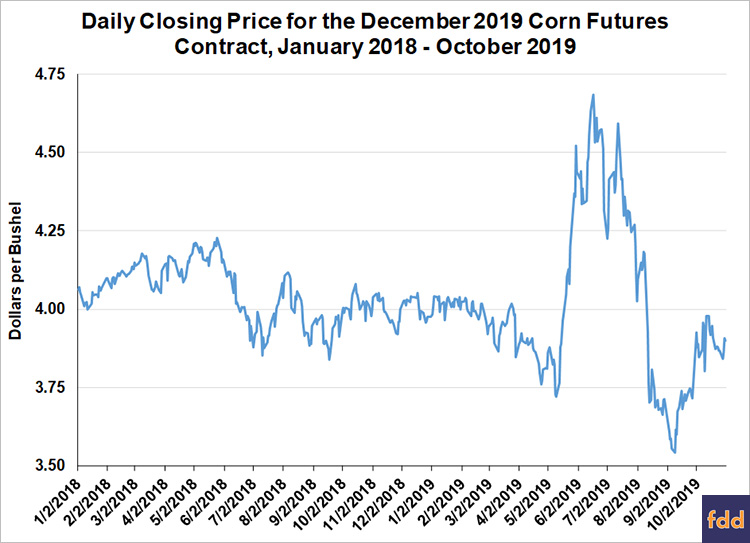 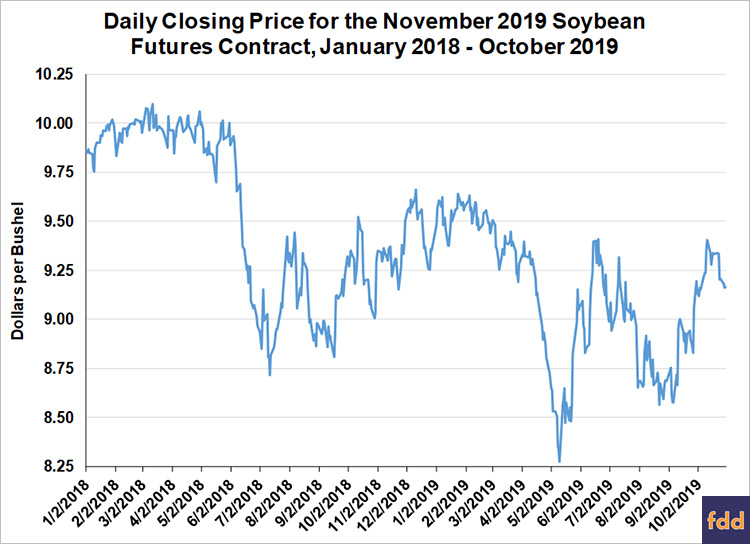 The slides for this presentation can be found at:
https://farmdoc.illinois.edu/ifes/2019-archive

Irwin, S. and T. Hubbs. “Another Look at Late Planting of the 2019 Soybean Crop.” farmdoc daily (9):118, Department of Agricultural and Consumer Economics, University of Illinois at Urbana-Champaign, June 26, 2019.

Irwin, S. and T. Hubbs. “Another Look at Late Planting of the 2019 Corn Crop.” farmdoc daily (9):108, Department of Agricultural and Consumer Economics, University of Illinois at Urbana-Champaign, June 12, 2019.

Irwin, S. and T. Hubbs. “Late Planting and Projections of 2019 U.S. Corn and Soybean Acreage.” farmdoc daily (9):85, Department of Agricultural and Consumer Economics, University of Illinois at Urbana-Champaign, May 9, 2019.