The National Agricultural Statistical Service (NASS) released 2019 county yields for corn and soybeans on February 20, allowing for more reliable estimates of Agricultural Risk Coverage at the county level (ARC-CO) payments for 2019.  Although Risk Management Agency (RMA) yields will be used in the payment calculations, we use these NASS yields with a calculated adjustment factor to estimate ARC-CO payments for all counties in the nation for which data are available.  These estimates are provided in a downloadable Microsoft Excel spreadsheet (available here).  ARC-CO payment estimates for Illinois counties are provided in this article.  Overall, there is a good chance of large ARC-CO payments for soybeans in about half the counties in Illinois.

A “2019arcCoPayEstimates.xlsx” worksheet provides an ARC-CO payment estimate for each county that NASS has provided a yield.  FSA will use crop insurance data collected by RMA in calculating county yields for ARC-CO, which will differ from yields reported by NASS.  FSA has released yields from 2013 through 2017 for calculating benchmark revenue.  For each year from 2013 to 2017, differences between the FSA and NASS yield were calculated.  These were then averaged for each county to arrive at an average adjustment factor (column O in the 2019arcCoPayEstimates worksheet). These adjustment factors were added to NASS yields to arrive at estimates of the yields FSA will use in the payment calculations and the ARC-CO payments.  For example, FSA yields in Effingham County, Illinois averaged 1.0 bushel higher than NASS yields from 2013 to 2017.  NASS has estimated Effingham County’s soybean yield at 51.5 bushels per acre in 2019.  For estimating the 2019 ARC-CO payment, a 52.5 bushel per acre yield is used (52.5 = 51.5 NASS yield + 1.0 adjustment factor).

For those counties having NASS corn yields, ARC-CO was estimated to make payments for corn in seven cases:

There will be a considerable range in ARC-CO payments for soybeans in Illinois (see Figure below). The highest estimate is for a $56 per base acre payment for both irrigated and non-irrigated corn in Champaign County, Illinois.  Of the counties with reported NASS soybean yields, 40% are estimated not to make payments. 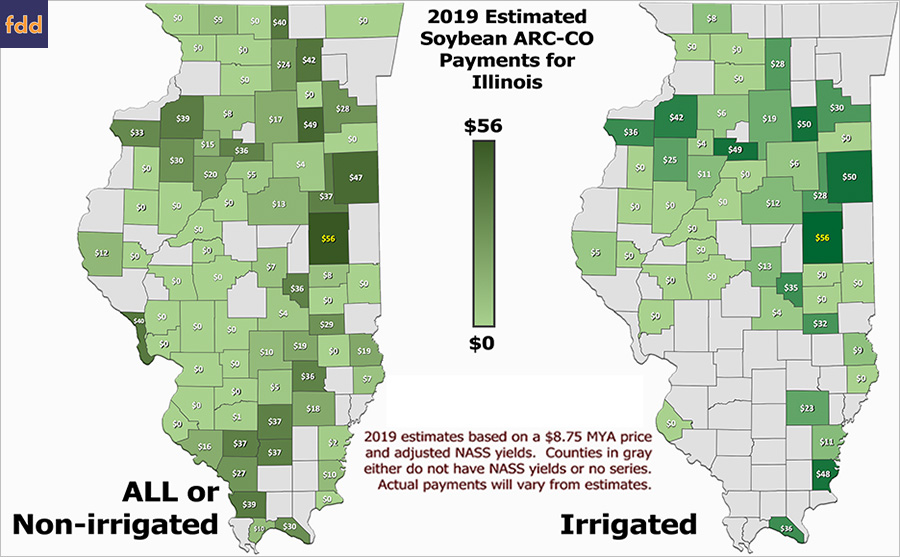 Geographically, high ARC-CO payments for soybeans appear to be concentrated in several areas of Illinois:

Note that there are a large number of counties that have no estimate.  All counties will have either an “all” or “Non-irrigated” ARC-CO payment (left figure below).  A gauge for these counties may be nearby counties.

The 2019 FSA yields will vary from estimates presented in this paper. Differences from county adjustments were calculated for each year were data exists to possible variations from yield estimates used here. Figure 1 shows a histogram for yields for soybeans in Illinois counties with non-irrigated or all soybean series.  Yields are within 2.5 bushels of the adjustment factor 82.7 percent of the time.  It would then be reasonable to expect the FSA yield to be within 2.5 bushels of those used in this article.  Still, there is a chance of large variation, with some observations being over 5 bushels away from estimates. 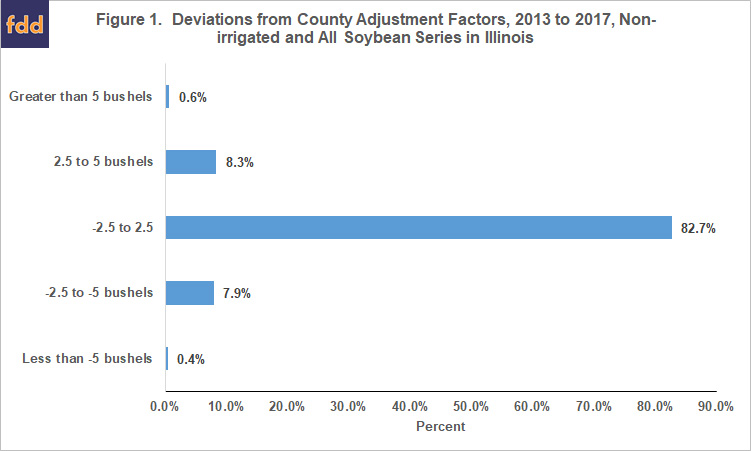 In Illinois, those deviations become larger for irrigated series.  As can be seen in Figure 2, yields are within 2.5 bushels of the adjustment only 51% of the time.  There is a much greater chance of variations from estimates in irrigated series. 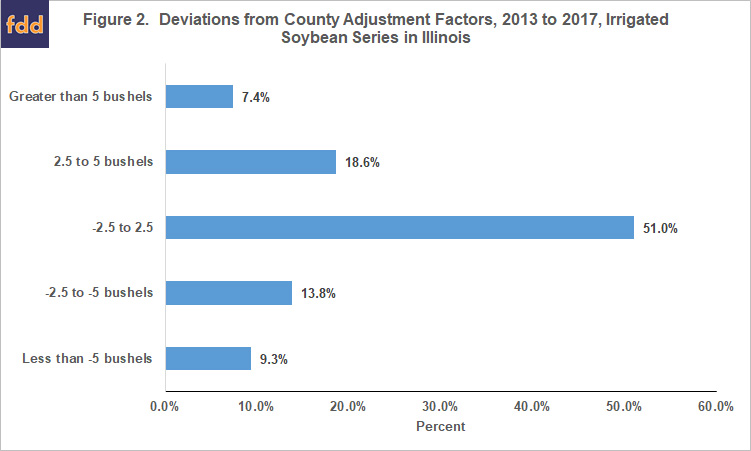 Actual ARC-CO payments will vary from these estimates because either MYA prices will vary from projections or because FSA yields will differ from adjusted NASS yields, or both may vary.  Estimates of these likelihoods will be made available in the Gardner Program Payment Calculator toward the end of February. Actual payments will not be known for certain until well after the March 15 deadline for making 2019 and 2020 commodity title choices.

Farmers in or near counties with large projected ARC-CO payments may wish to take ARC-CO, particularly for soybeans.  Large ARC-CO soybean payments in 2019 likely will be much larger than any 2020 payments from PLC.

More information is available in the 2018 Farm Bill Tool Box on farmdoc: https://farmdoc.illinois.edu/2018-farm-bill.