One of the key early assessments of the U.S. average soybean yield is the projection made by the USDA’s World Agricultural Outlook Board (WAOB).  Since 1993, those projections have been used in the May, June, and July WASDE reports to make supply, ending stocks, and price projections for the upcoming marketing year.  While it is clear that the WAOB yield forecasts are perceived by market participants as containing important new information, these forecasts appear to be poorly understood by many and often confused with later forecasts released by the National Agricultural Statistics Service (NASS) of the USDA.  The purpose of today’s article is to describe the crop weather model that the WAOB uses to make soybean yield forecasts and demonstrate specifically how the 2020 forecasts were generated.

With that background, we can turn our attention to describing the crop weather model used to generate WAOB soybean yield forecasts.  As detailed in Westcott and Jewison (2013), the WAOB crop weather model is a “Thompson-style” regression model.  Specifically, the model of U.S. average soybean yield was originally estimated using data for 1988 through 2012 and included the following explanatory variables: i) a time trend variable to represent technological change, ii) June precipitation shortfall, iii) July-August average precipitation, and iv) July-August average temperature.  The WAOB soybean model does not include planting progress, different than the WAOB corn model (farmdoc daily, July 2, 2020). The weather data were collected for seven key soybean-producing States (Iowa, Illinois, Indiana, Ohio, Missouri, Minnesota, and Nebraska).  These eight states typically represented about 70 percent of U.S. soybean production when the model was originally developed.  An aggregate measure for the seven states was constructed using harvested soybean acres to weight state-specific observations.

We collected yield, planting progress, and weather data for 1988-2019 following as closely as possible the definitions discussed above.  We then computed acreage-weighted aggregates of the weather variables.  Finally, we estimated the model using linear regression over 1988-2012 in an attempt to replicate the original model results found in Table 7 of Westcott and Jewison (2013).  Our estimated results are compared to the original estimates provided by Westcott and Jewison in Table 1.  We were unable to replicate exactly the original estimates but were able to come very close.  The differences are fairly trivial and probably reflect small differences between the data sets used in the two regression estimations. 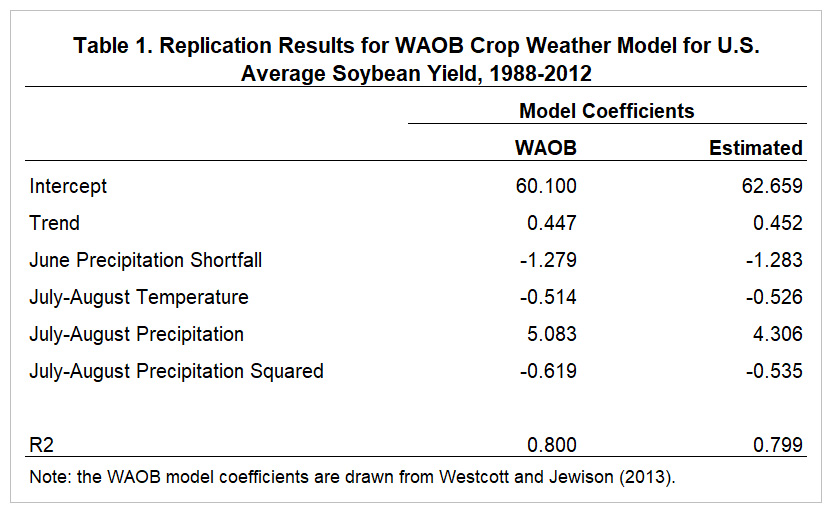 The next step was to update the crop weather model estimates through 2019.  Our conversations with WAOB staff indicate that an additional variable was added to the soybean model since the original estimation presented in Westcott and Jewison (2013).  In particular, a dummy variable was added for 2003 to represent the yield loss due to aphids that year.  The estimation results including this 2003 dummy variable are shown in Table 2.  Even with the addition of the dummy variable, the coefficient estimates for the other variables over 1988-2019 do not differ greatly from those over 1988-2012 shown in Table 1, perhaps with the exception of the June shortfall variable.  The coefficient estimates shown in Table 2 are presumably close to those used by the WAOB to generate the yield projection of 49.8 bushels per acre released in the May 2020 WASDE report.  We now turn to the task of replicating this yield forecast using the estimation results shown in Table 2. 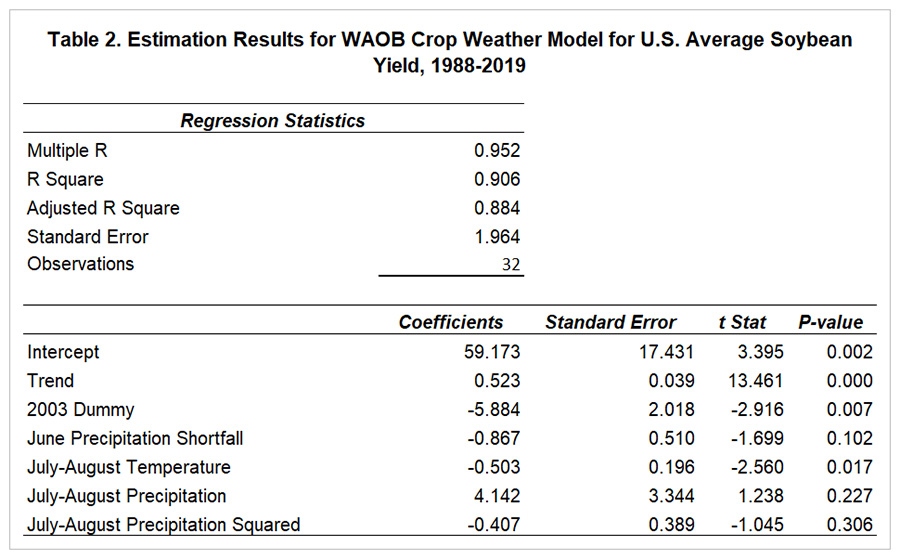 It would seem straightforward to estimate a 2020 soybean yield using the WAOB crop weather model.  Simply take the coefficient variables found in Table 2 times the sample averages for each variable, sum the results, and generate the projection.  Note that in the case of the June shortfall variable, the sample average is not literally zero but this zero is typically assumed unless a severe drought like 1988 or 2012 is expected.  This procedure generates the following 2020 yield forecast:

The computed forecast is indeed very close the published WASDE forecast in May and June of this year of 49.8 bushels.  Regardless, this is not exactly not how the WAOB computes its soybean projection. 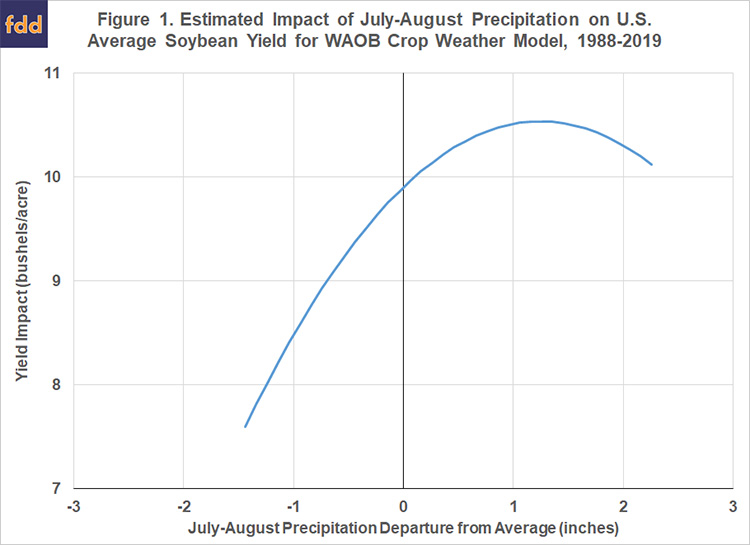 There are various methods to account for the non-linear impact of July-August precipitation when making yield projections with the crop weather model.  One is to use Monte Carlo simulation, which is what we did last week in a different application of crop weather models (farmdoc daily, June 25, 2020).  The WAOB instead determines the one-standard deviation range of July-August precipitation above and below the average, computes the yield prediction for all levels of July precipitation within this range, and then averages the resulting yield predictions.  Westcott and Jewison (2013) indicate this procedure reduced the 2013 model yield projection by only 0.09 bushels per acre.  They conclude that the soybean yield adjustment is relatively smaller than the similar adjustment for corn because soybean yields are less sensitive to weather conditions.  This is a puzzling conclusion looking at Figure 1, which shows that soybean yield response to July-August precipitation is highly non-linear.  An alternative explanation is that the particular adjustment procedure used by the WAOB does not account fully for extreme outcomes in the tails of the July-August precipitation distribution, and a larger adjustment will result if this is done.

Using these revised procedures we were not able to exactly replicate the published WASDE soybean yield forecast of 49.8 bushels released in May and June of this year.  Our underlying data may differ slightly from that used by the WAOB and/or we may not have exactly replicated the non-linear adjustment for July-August precipitation used by the WAOB.

Soybean yield forecasts contained in May, June, and July WASDE reports from the USDA provide important information to market participants.  The forecasts are based on a crop weather model maintained by the World Agricultural Outlook Board (WAOB).  The model and procedures used by the WAOB to generate forecasts from the model appear to be poorly understood by many and often confused with later survey-based forecasts released by the National Agricultural Statistics Service (NASS) of the USDA.  The WAOB crop weather model for soybeans is actually fairly simple, with trend, a 2003 dummy variable, and three weather variables.  We collected the same yield, planting progress, and weather variables as listed in a 2013 report that first presented the WAOB model. Our model estimates using this data were reasonably close to the original estimates found in that report. We then went on to update the model estimates through 2019 and project the 2020 national average yield for soybean.  After adjusting for the non-linear response of soybean yield to July precipitation, we were not able to exactly replicate the published forecast of 49.8 bushels per acre.  However, our estimate of 49.6 bushels is very closer.  We hope this exercise will increase understanding of the WAOB crop weather model and procedures used to generate these important and market-moving soybean yield forecasts.