Revision Note: The version released on September 2, 2020, contained outdated Cause of Loss data from the USDA Risk Management Agency for crop year 2019. This version has been corrected with the updated data.

The purpose of this article is to examine when losses that trigger crop insurance indemnities primarily occur. Early season excess moisture in 2019 allowed losses to become measurable much earlier in the growing season, which contributed to an early season spike in indemnity payments compared to a typical year.

Crop insurance is a popular safety net utilized by American farmers, with a collective $110 billion worth of production protected by the program in 2019. “Prevented planting” is a feature of crop insurance that is triggered when conditions disallow planting within a specified window. Prevented plant coverage helps offset fixed costs and variable costs incurred before planting.

Upon purchasing crop insurance, the Approved Insurance Provider (AIP) agrees to indemnify (or protect) the farmer or grower against losses that occur during the crop year, with the premiums varying by crop, practice, plan, and location. An indemnity (or loss payment) is then issued to the insured producer when the requirements of the policy have been met, such as yields or revenues failing to meet a threshold.

It is imperative to note that indemnity payments are typically an underestimate of crop loss for two reasons: (1) some insured crop losses aren’t large enough to trigger payments; and (2) indemnity payments can only be received by those who have purchased insurance.

There are many uncertainties that can contribute to crop loss, including natural disasters, adverse weather, insect infestations, and plant diseases. The main cause of loss categories for crop insurance include decline in price, drought, excess moisture and precipitation, flood, and hail. Based on averages from 2015 to 2019, weather and weather-related outcomes were the leading cause of crop loss, contributing to nearly 85 percent of loss overall in the United States for both corn and soybean crops. In 2019, more than 75 percent of the loss was attributed to excess moisture and precipitation from adverse weather events.

The loss adjuster records the specific date of the cause of loss event, like a flood or wind damage, although data was historically captured as just the month and year. Drought, excessive moisture, and like factors can span days and weeks, so they are often tagged to the first of a month. As such, the loss adjuster would record what he or she determines to be the cause(s) of loss and date based on what they find during the loss adjustment process.

2019 was the wettest 12-month stretch on record for the United States, according to the National Centers for Environmental Information. Record-breaking precipitation led to flooding and significant delays in the pace of U.S. corn and soybean planting (Farm Policy News).

At time of print, indemnity payments for the 2019 commodity year were at more than $10.4 billion in order to cover losses spurred by harsh weather conditions and immense precipitation (Figure 1). More than a third of U.S. farm income in calendar year 2019 came from the U.S. government in the form of federal assistance and crop insurance payouts, in part due to the Market Facilitation Program (Farm Policy News). Depending on several factors, including when the crop loss occurred and when the crop insurance claim was filed, commodity year 2019 indemnities could have been paid in calendar year 2019 or 2020. 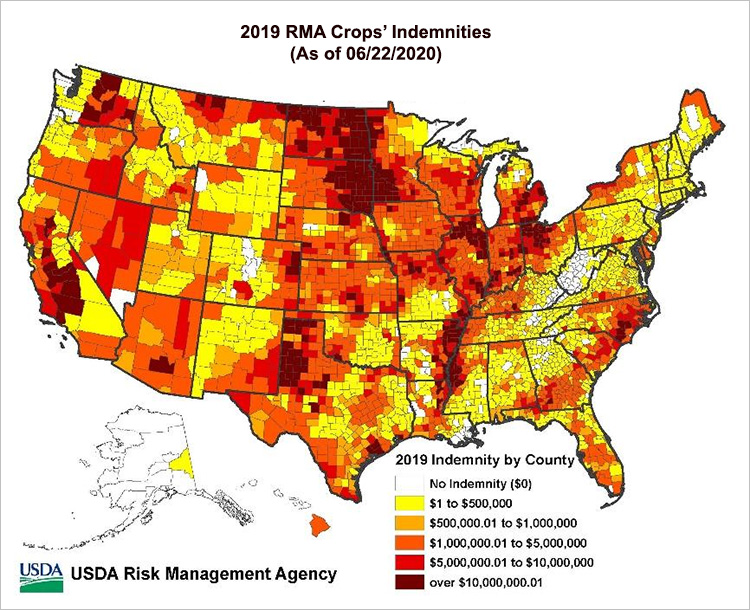 While 2019 presented one of the most challenging planting seasons in recent memory, America’s farmers planted 91.7 million acres of corn, the most of any crop that year according to USDA’s National Agricultural Statistics Service (NASS). Per NASS, the planting progress report for the week ending May 19, 2019, revealed that the planting pace for corn was 29 percent behind 2018 and 31 percent behind the 5 year average (Farm Policy News). Timely planting of the U.S. corn crop was a big concern for 2019, as yields could be negatively affected by late plantings (farmdoc daily, April 24, 2019). The average corn yield is largely determined by weather conditions during the reproductive and grain filling stages during the summer months, which was increasingly difficult in 2019 as a result of flooding conditions in the summer months (farmdoc). During 2019, nearly 87 million acres of corn were covered by crop insurance, which included acres intended to be planted with corn but ultimately received a prevented planting payment.

Factors causing losses tend to occur mostly in ‘warmer months’ during late spring and throughout summer in the United States (April-August). Drought or other issues can reduce yields, and producers must provide a notice of the loss within 72 hours of noticing it. Oftentimes, however, the actual loss cannot be measured until the crop is harvested. As a result, the averages of indemnity payments are highest in December through February. This, along with reporting lags, translates to an approximate average seven-month timeframe for potential losses to be reported as indemnity payments on RMA’s website in a typical year, as shown below. As evidenced, indemnity payments were on a faster timeline in 2019 than in a typical year (see charts below). An increase in prevented plantings in 2019 allowed losses to become measurable much earlier in the season and, as a result, indemnities could be paid and reported much sooner. 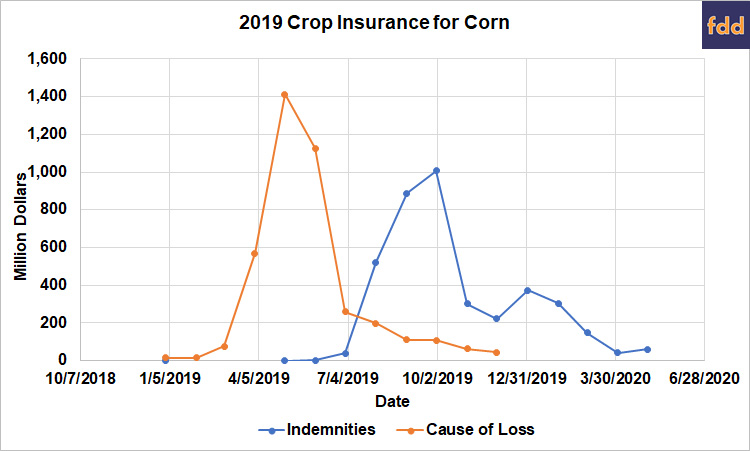 During 2019, more than 71 million acres of soybeans were covered by crop insurance, with 91 percent of those acres in the Revenue Protection program. Like the insured acreage for corn, the 71 million acres of soybeans includes acres that were intended to be planted soybeans but received a prevented planting payment. According to the USDA March Prospective Plantings survey, farmers intended to seed 84.6 million acres of soybeans in 2019, down 5.1 percent from 2018. According to NASS, the planting progress report for the week ending May 19, 2019, revealed that the planting pace for soybean acres was 34 percent behind 2018 and 28 percent behind the 5 year average (Farm Policy News). Actual soybean area reported in October was short nearly 10 percent of intentions due to the weather issues and falling prices after the Prospective Plantings survey. The final planted area was 76.1 million acres.

Similar to the corn crop, the potential loss averages tend to occur mostly during the spring and summer months, with June and July being the months with the highest accounted losses. January is historically the month with the most indemnity payments, with an average 7-months’ time between peak loss attribution and indemnities being reported on RMA’s website. The prevented plantings early in the season moved up the timeframe for indemnity payments from years where losses occurred later during the growing season. 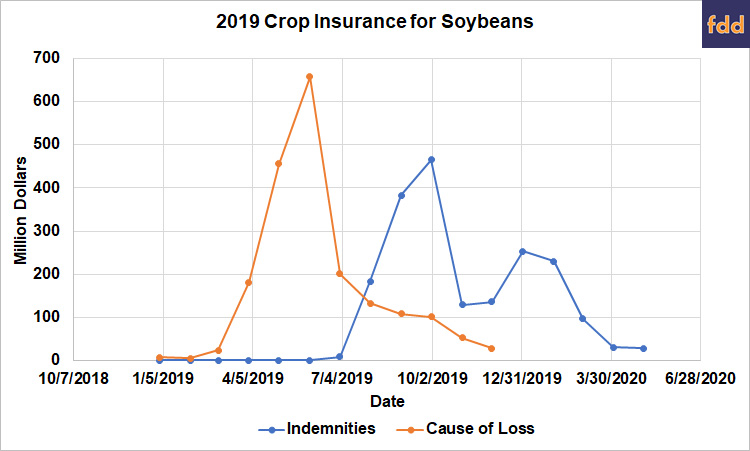 In 2019, the dominant cause of loss categories were excess moisture/precipitation and flooding for both soybeans and corn, with the numbers recorded being the largest on record within the last five years. More than 84 percent of those losses was connected to weather or a weather-related outcome in each of the five years tracked.

Many factors influence the timing between a loss and an indemnity payment. A producer must file a notice of loss after discovering damage, but the extent of the damage often cannot be measured until harvest. Once the losses are reported, measured, and the terms of the insurance contract are satisfied, claims will be paid within 30 days. The significant increase in prevented plantings during 2019 allowed early season measurement loss that allowed payments to be made much earlier in the season. This historical cause of loss information can be helpful in predicting total indemnities during the year, as we observe loss events months prior to indemnities being distributed.

The findings and conclusions in this article are those of the authors and should not be construed to represent any official USDA or U.S. Government determination or policy.