China’s grain and oilseed sector is examined using US Department of Agriculture Production, Supply, and Distribution data.  Examining grains and oilseeds in aggregate is useful because of production, consumption and policy interactions among the crops in this sector.  While not clear, new sector dynamics may be emerging.  China’s shortfall in domestic production vs. consumption of grains and oilseeds has been historically high since 2016 even with no notable decline in yield or harvested area.  Imports have covered the shortfall.  The grains and oilseeds included in this study are listed in Data Note 1.  The study begins with 1972, initial year of data for peanuts in China. 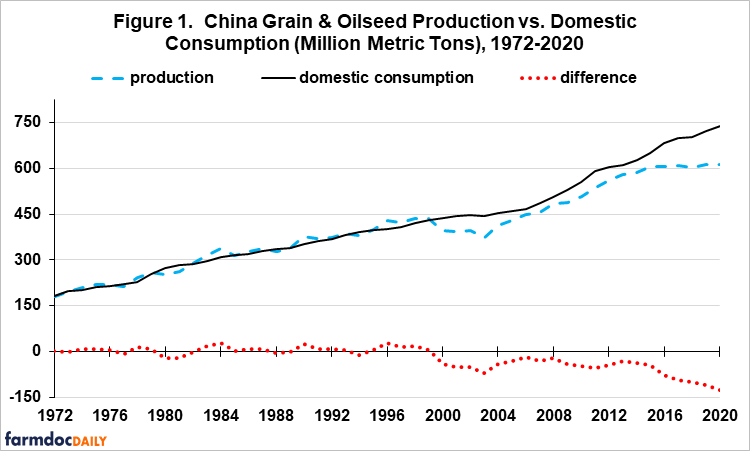 Production shortfalls can be covered by consuming stocks.  While amount of stocks is often discussed, the most revealing measure is usually the ratio of stocks to use.  Impact of a given level of stocks varies with the amount of use it covers.  Figure 2 presents such a measure: ratio of China’s ending stocks to domestic consumption for a year.  A stark difference exists between 2000-2005 and 2016-2020.  Stock-to use ratio for aggregate grains and oilseeds was drawn down by two-thirds over 2000-2005: from 76% in 1999 to 24% in 2005.  Over 2016-2020, stocks have not been drawn down. 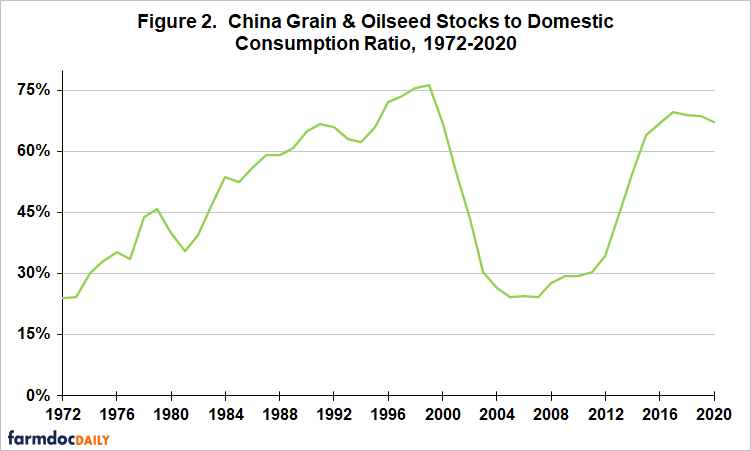 Prior to 1995, most of China’s grain and oilseed imports were grains (see Figure 3).  In the early 2000s, imports began to grow, consistent with the emerging production shortfalls.  Imports of soybeans, which dominate, have grown an average of 4.3 MMT, or over 150 million bushels per year since 2000.  Despite a decline in 2018 due to the tariff war with the US and African Swine Flu, China’s soybean imports for 2019 and 2020 suggest their growth may not be slowing.  Imports of grains did not exceed 18 MMT until 2013.  They have since averaged 25 MMT/year vs. 8 MMT pre 2013.  The increase coincided with the rebuilding of stocks (see Figure 2).  Both increases were a result of China’s support prices that were well above world prices for corn, rice, and wheat.  The high support prices while imports of these grains remained low led the US to file two cases against China at WTO (World Trade Organization).  In one case, WTO found China’s domestic support for rice and wheat in 2012-2015 exceeded its WTO commitments.  In the second case, WTO found China administered its Tariff Rate Quotas (TRQ) for corn, rice, and whea in a way that inhibited their filling (see Data Note 2).  Both rulings were made in 2019 and enhance the potential for imports of these grains by China.  For a more detailed discussion of the WTO cases see the farmdoc daily articles of March 6 and May 8, 2019. 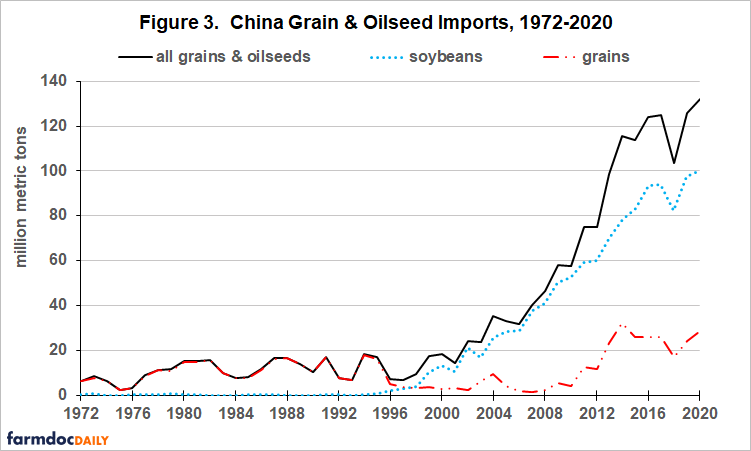 To explore China’s production shortfall, Figure 4 presents aggregate harvest area and yield for grains and oilseeds.  The 2000-2005 period experienced below trendline yields and a decline in harvest area.  In contrast, 2016-2020 has no notable departure from trendline yield and only a slight decline in harvest area.  Harvest area had increased from a low of 104 million hectares (257 million acres) in 2003 to a high of 125 million hectares (309 million acres) in 2015 and 2016.  Annual growth in aggregate yield of grains and oilseeds does not appear to have changed since 1972.  Since 2000, China has made large investments in public ag research and development, and passed the US in public research expenditures by 2011 (Fuglie).  It is probably too early in the research and development process for this investment to translate into faster yield growth, but enough years have passed that whether or not yield growth increases over the next 10 to 15 years bears close watching. 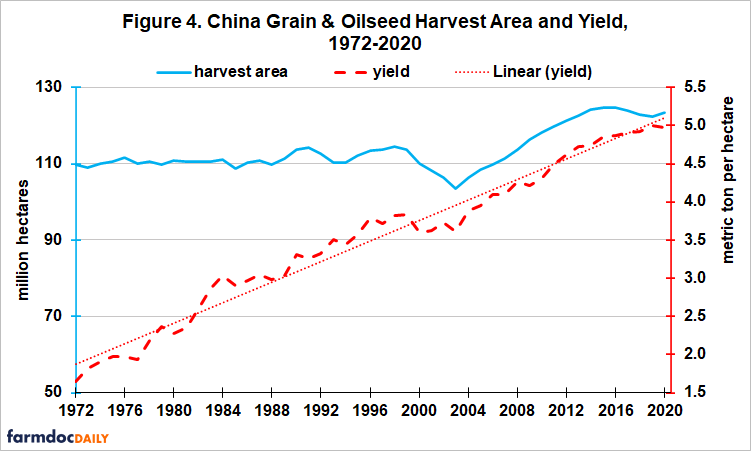 With 1.4 billion consumers and economic growth that is unprecedented in human history, China has dominated the demand side of farm commodity markets so far during the 21st Century.

China’s grain and oilseed sector is marked by distinct changes in its path. One is the 1995 start of rapid, sizable growth in soybean imports.  Another is the 2013 increase in grain imports.

While it is too early to tell for sure, another distinct change may be emerging.

Since 2015, China’s shortfall in domestic production vs. consumption of aggregate grains and oilseeds has increased at a historically high rate.  The increase has occurred despite no notable departure of yield from trendline, only a slight decline in harvest area, a tariff war with the US, and a severe outbreak of African Swine Flu.  China appears to have decided not to slow its growing consumption of grains and oilseeds.  The recent period may thus turn out to be an indicator that China is increasing the importance its assigns to consumers in making grain and oilseed sector decisions.

Since 1972, there is no indication that the growth in China’s aggregate grain and oilseed yield has changed.  China has however made a large investment in public agricultural research since 2000.  Its impact on the growth in yield over the next 10 to 15 years bears close watching.  In the meantime, harvested area will be critical in China’s management of its shortfall in domestic grain and oilseed production relative to use.