Last week, the U.S. Department of Agriculture (USDA) released its baseline projections providing ten-year estimates of supply and demand factors impacting U.S. agriculture. These projections suggest long-run prices of $3.55 per bushel for corn, $9.80 per bushel for soybeans, and $5.10 per bushel for wheat. While these prices are reasonable for long-run budgeting exercises, we also suggest using lower prices of $3.40 for corn, $9.00 for soybeans, and $4.80 for wheat. Long-run prices suggest that soybeans will continue to be more profitable than corn into the foreseeable future.

Annually, the U.S. Department of Agriculture (USDA) produces ten-year baseline projections for crops and livestock grown in the United States (see Baseline Projections). For each crop, supply and demand factors are estimated, along with yearly estimates of market year average (MYA) prices for the U.S. Final projections are typically released in February near the time of USDA’s annual Agricultural Outlet Forum. An archived of historical projections is available here.

Corn, soybean, and wheat forecasts are shown in the following sections. Historical prices from 2000 to 2019 also are shown to provide background. Average prices are calculated from 2013 to 2019 as references for forecasts. Much of the increased use of corn in ethanol occurred by 2013. Thus the 2013-2019 period was judged as a reasonably stable demand period. Historical prices from 2000 to 2019 were obtained from Quick Stats, a website maintained by the National Agricultural Statistical Service (NASS), an agency of the U.S. Department of Agriculture. 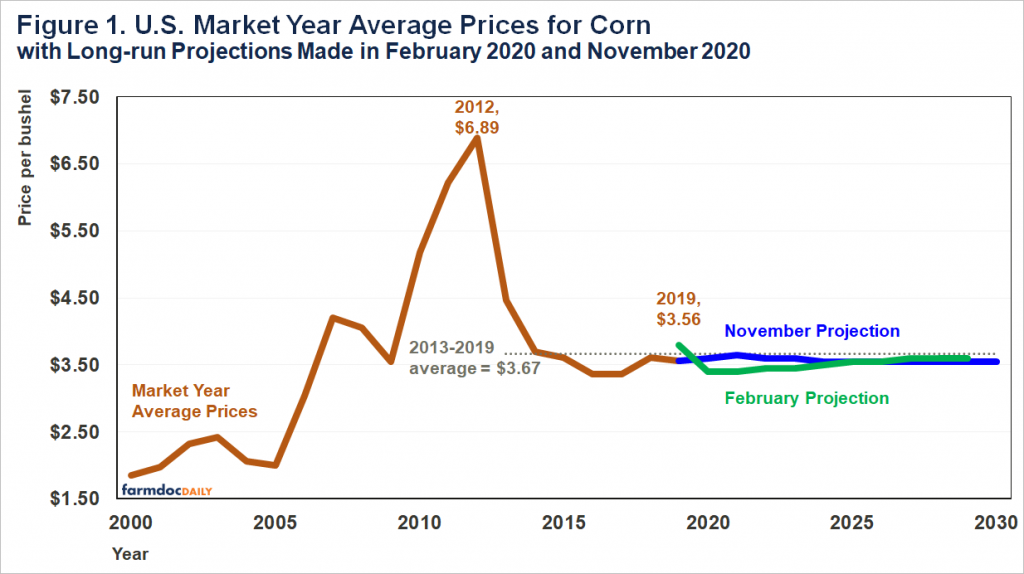 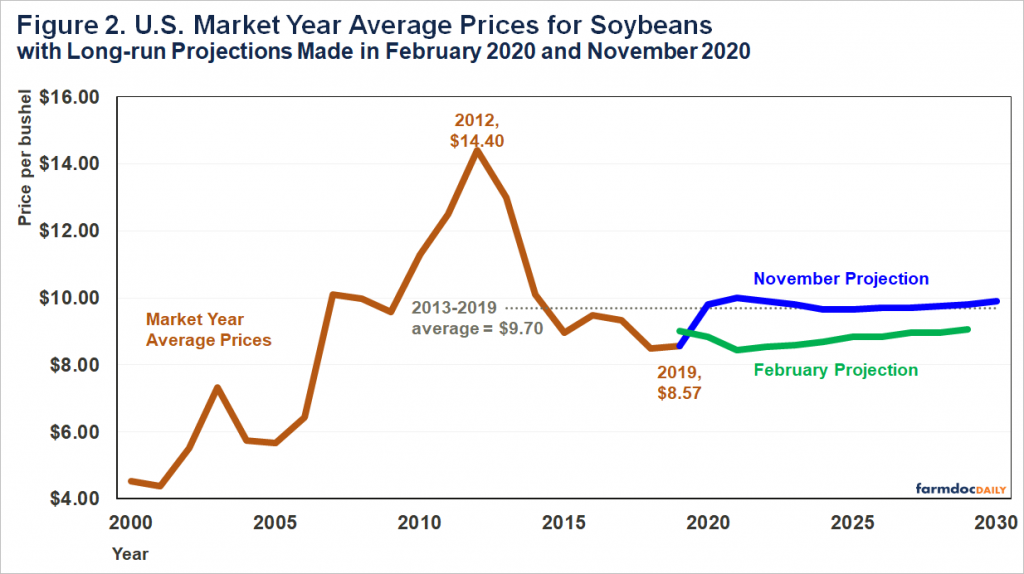 Overall, a rebound in exports in 2020 and a continuation of export demand growth leads to a more optimistic price scenario for soybeans. The November projection arrives at prices near the 2013-2019 average of $9.80. 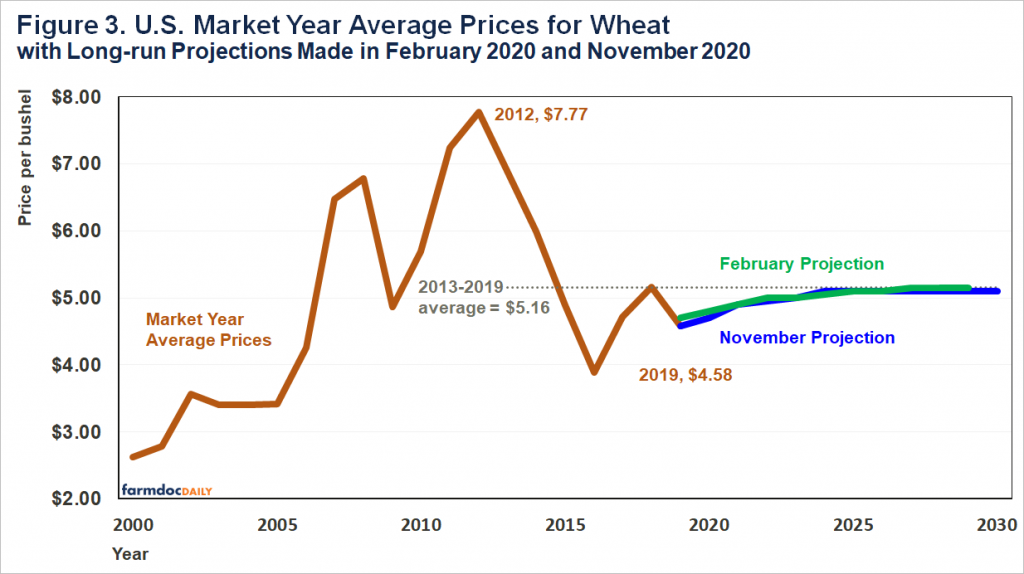 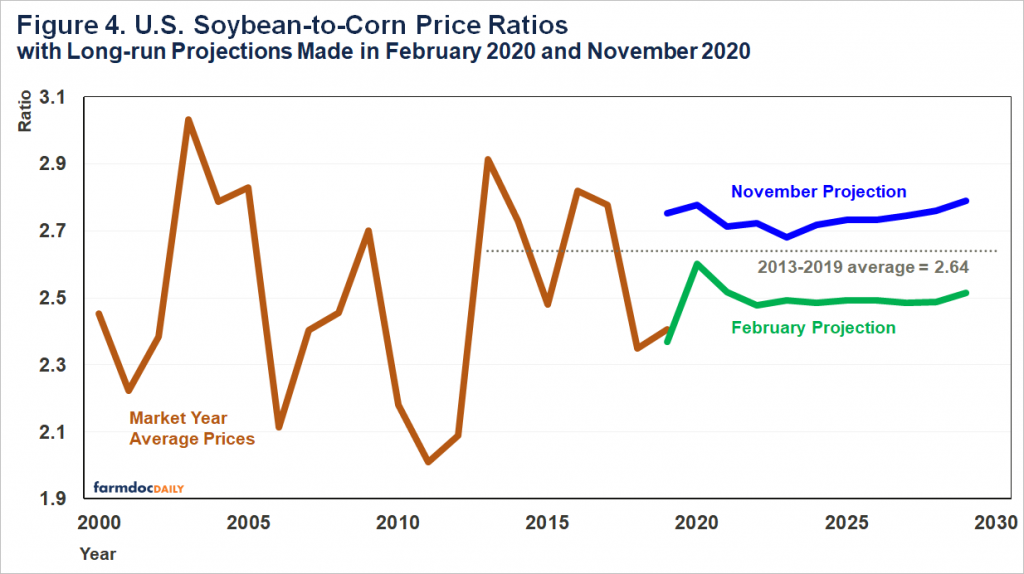 Given the increase in relative soybean prices, one would expect an acreage response (see Figure 5). November projections have U.S. soybean acres between 90 and 90.5 million acres for 2021 to 2030, up by an average of 4.5 million acres from February projections. 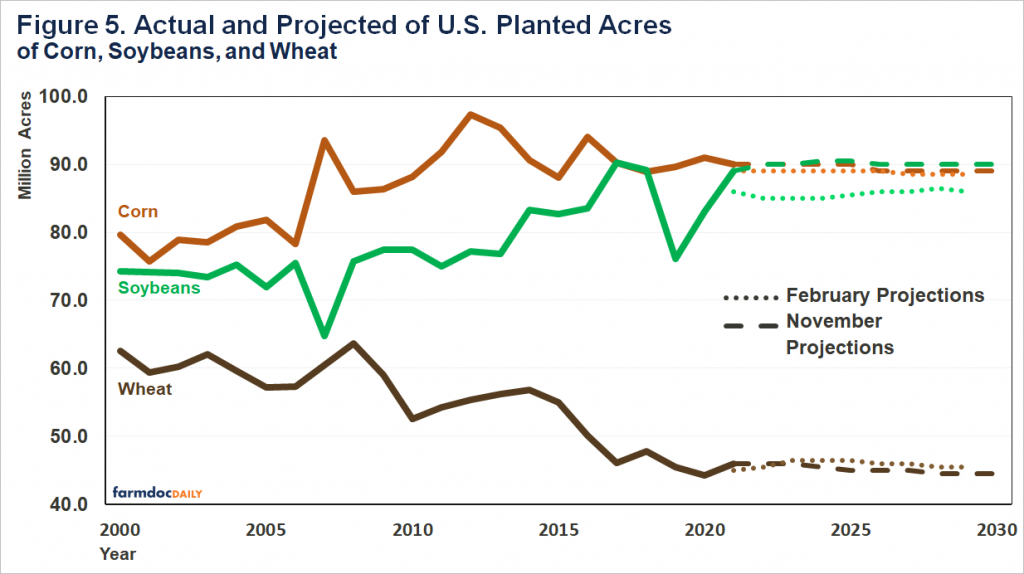 November forecasts indicate soybean acres will exceed corn acres.  Planted acres of soybeans have only exceeded corn acres in 2018.  An extended period of more soybean acres than corn acres would be a new experience for U.S. agriculture.  This may be viewed as a watershed event as demand for crops continues to evolve.

November projections place long-run planning prices at $3.55 per bushel for corn, $9.80 per bushel for soybeans, and $5.10 per bushel for wheat. Those prices are considerably more optimistic than our projections made at the beginning of COVID-19 control measures (see farmdoc daily, April 28, 2020).  The corn and soybean long-run prices are slightly below the 2013-2019 averages, and soybean prices are slightly above the 2013-2019 average.  USDA projections largely reflect a return to a 2013-2019 normal.  This forecast may be based on COVID-19 having limited impacts on demand, particularly ethanol, and continued growing demand for exports.  This scenario could be realistic, but more adverse outcomes also are possible.  If doing long-run budgeting exercises, the $3.55 corn, $9.80 soybean, and $5.10 wheat prices are reasonable to use.  We also suggest using prices of $3.40 for corn, $9.00 for soybeans, and $4.60 for wheat as a set of lower prices that could realistically happen.

Again, note that these long-run planning prices are near 2013-2019 averages. Much of this period has been associated with low incomes relative to 2006-2012 incomes. Moreover, ad hoc Federal payments in the form of Market Facilitation Program (MFP) and Coronavirus Food Assistance Program (CFAP) payments have been important revenue sources. Not continuing these programs at the long-run prices would signal a continued period of low incomes in agriculture.

Recent price changes again place acreage decisions in focus.  Long-run forecasts would result in soybeans having a profitability advantage over corn. Soybeans have been more profitable than corn since 2013 in central Illinois (see farmdoc daily, March 10, 2020). Central Illinois has a comparative advantage in producing corn over other regions, suggesting that soybeans have been more profitable than corn over large areas of the Corn Belt. November price projections suggest that soybeans will continue to be more profitable than corn. It seems possible that different acreage shifts could result, thereby causing soybean-to-corn price ratios to move lower from November projections. Management practices that allow more soybeans in rotations should be evaluated.

Schnitkey, G. "Profitability and Acreage Shifts between Corn and Soybeans in Illinois." farmdoc daily (10):44, Department of Agricultural and Consumer Economics, University of Illinois at Urbana-Champaign, March 10, 2020.