On March 31, 2021, USDA (US Department of Agriculture) will release its March 1 survey estimates in its March 31st Grain Stocks Report. This article provides estimates of US corn stocks as of March 1. A complimentary article estimating March 1 soybeans stocks can be found in the March 22, 2021 farmdoc daily article. With near record low ending stock to use ratio and relatively high prices for corn, the March stocks report should not be overshadowed by the 2021 Prospective Plantings Report also released on March 31.

In the March 9, 2021 WASDE (World Agricultural Supply and Demand Estimates), USDA estimated a US 2020/21 ending stock to use ratio of 10.3% for corn. If realized, this ratio will be the lowest since 2013/14 (9.2%). Multiple factors contributed to tightening US ending corn stocks, but the 2 most important were (1) lower 2020 US production due to the derecho and late season drought and (2) higher than expected purchases of US corn by the Peoples Republic of China.  Nearby futures prices have increased 53% for corn since September 1, 2020, the start of the 2020/21 marketing year.

Estimating stocks begin with an estimate of supply at the start of the quarter.  For the March 1 stock estimate, starting value is the December 1 stock estimate in the December Grain Stocks Report.  These are stocks at the start of the December-February quarter. On December 1, 2020, corn stocks stored in all positions totaled 11.322 billion bushels. Corn unharvested as of December 1 is counted as on-farm storage and included in the Grain Stocks report. Adding in imports that totaled 8 million bushels during the quarter implies a total corn supply of 11.330 billion bushels.

USDA reserves the right to adjust Grain Stocks reports the following quarter and at the end of the year if errors are detected, production estimates are revised, or late reports are received. USDA quarterly stocks revisions have been occurring more often and increasing in size (see farmdoc daily, February 10, 2021, for more information). Obviously, changes in starting value mean estimates of ending stocks will be off by the revision in starting value even if the component estimates are accurate. December Grain Stocks will be used as the starting point to calculate March 1 corn stocks in this analysis, but the caveat discussed in this paragraph is important and needs to be kept in mind.

Uses of corn are exports, grindings that become inputs for industrial and food products, and domestic feeding. Corn exports can be estimated using weekly export inspection data provided by the Foreign Agriculture Service. Through the end of February cumulative export inspections since September 1 for corn totaled 1.011 billion bushels, roughly 43% of USDA’s forecasted export total for 2020/21. US Census Bureau count of total corn exports from September 1 through January 31 exceed corn inspections by 43 million bushels. Assuming this margin of difference stayed the same through February, corn exports for the first half of the marketing year totaled 1.054 billion bushels (1.011 billion + 43 million).  Subtracting off first quarter exports (September 1- November 30) of 445 million bushels implies corn exports of 609 million bushels in the second quarter.

USDA’s March 1st stocks report and 2021 planting intentions, both released on March 31, 2021: will set the tone for corn prices over the last six months of the 2020/21 marketing year. The December 1 Grain Stocks report contained surprises related to 1st quarter corn consumption but was overshadowed by the 3.8-bushel reduction in 2020 corn yields released the same day. March 1, 2021 stocks will play an immense role in corn market dynamics, especially given that recent cumulative corn export sales for the 2020/21 market year so far exceed the season average pace needed to reach USDA’s current export target for the year by roughly 640 million bushels. Market observers will closely observe 2021 planting intentions as a first indication of 2021 US corn production potential, but corn consumers will depend on the March 1 stocks to meet their needs over the remaining five months of the 2020/21 marketing year. If the need is not met with domestic supply, imports to the US will be needed to fill the gap.

Table 1 summaries the estimates provided in the article. 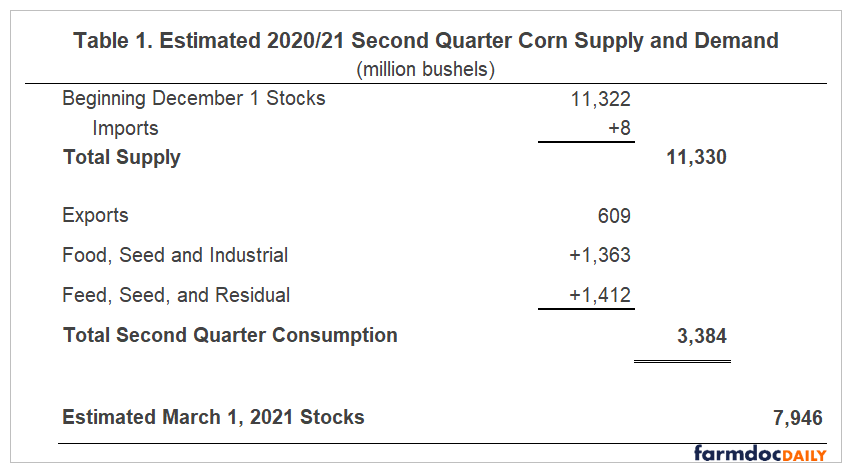 Irwin, S. "What Is Up with USDA Revisions to Quarterly Stock Estimates for Corn?." farmdoc daily (11):21, Department of Agricultural and Consumer Economics, University of Illinois at Urbana-Champaign, February 10, 2021.