The data in this article are from Quick Stats, a data file maintained by the US Department of Agriculture, National Agricultural Statistical Service.  The analysis starts with the 1974 crop year.  In the early 1970s, price volatility increased notably as the market replaced US farm policy as the more important determinant of price. 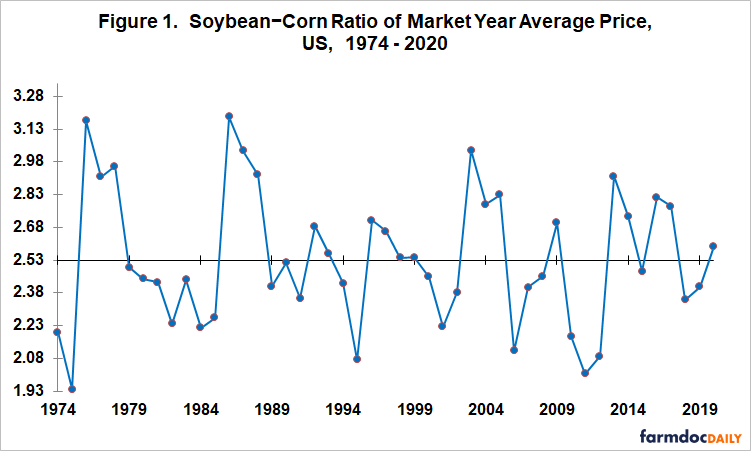 Soybean acres have increased vs. corn acres, resulting in a higher soybean−corn acre ratio over time (see Figure 2).  The trend is significant with 99% statistical confidence.   However, it explains only 26% of the annual variation in the acre ratio.  Other factors thus determine approximately three quarters of the annual variation.  The time trend equation finds soybean acres have gained on corn acres by 0.35 percentage points (PP) per year.  This value may seem small, but it adds up.  Average acres planted to soybeans were 50% higher in 2016-2020 than 1974-1978.  Corn acres were up only 11%.  US soybean acres clearly exceeded US corn acres only once, in 1983.  A government program, known as Payment-in-Kind (PIK), paid farmers to not plant a large number of corn acres.  Planted acres were nearly the same in 2017 and 2018. 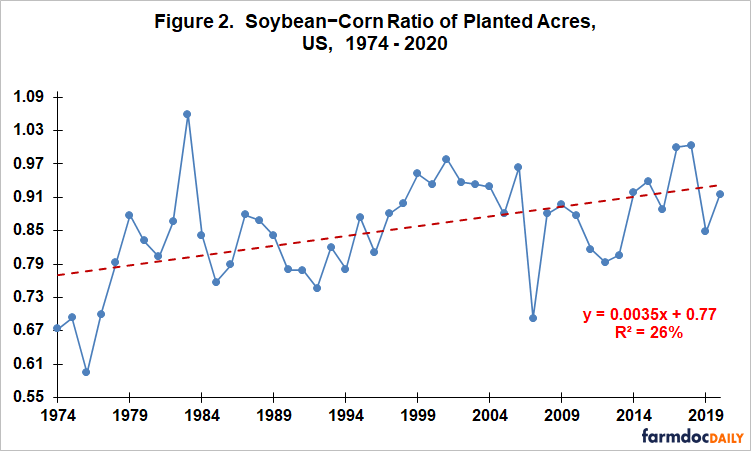 Soybean yields have increased slower than corn yields, resulting is a lower soybean−corn yield ratio over time (see Figure 3).  A linear time trend is significant with 99% statistical confidence.  It explains 18% of the annual variation of the yield ratio, which is less than for the acre ratio.  The time trend equation implies soybean yields have increased .06 percentage points less per year than have corn yields.  Again, this small difference adds up.  Corn yield per harvested acre was 97% higher in 2016-2020 than 1974-1978.  Soybean harvest yield was 78% higher. 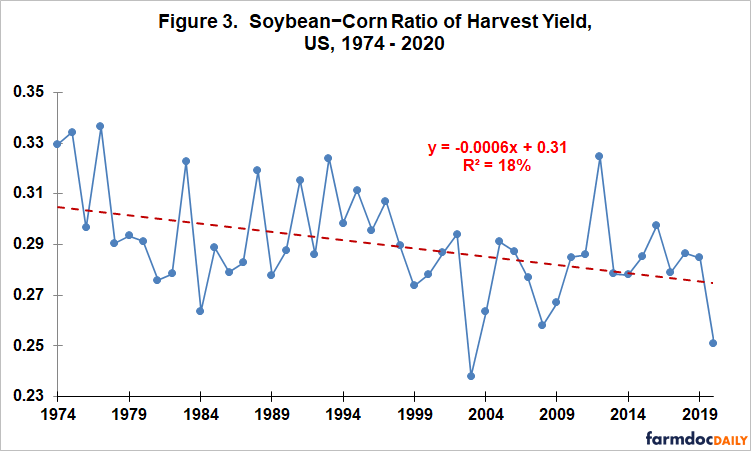 A key price ratio for the US crop sector is the soybean−corn price ratio.  Despite notable changes in supply and demand for the 2 largest acreage US field crops since 1974, the ratio has exhibited no discernible time trend.  It does however exhibit considerable variation from year to year.

Unsurprisingly, due to the growth in soybean acres the ratio of soybean to corn acres has trended up over time.  In contrast, the ratio of soybean to corn yield has trended down as yield has increased slightly faster for corn.  The slightly faster growth in corn yields mean that slightly fewer acres need to move into corn than into soybeans if demand for corn and soybeans grows at the same percent rate.

The soybean-corn yield ratio can vary substantially from its usual relationship.  This variability is a risk associated with selecting which crop to plant.  It may have greater importance in 2021 as lower stocks mean higher price variability, making income foregone from choosing the crop that’s ends up with the lower income potentially larger in 2021.  Enhanced risk may affect cropping decisions, cropping practices, crop insurance decisions, and forward pricing decisions.