The Growing Climate Solutions Act, initially drafted in 2020, was reintroduced to the Senate on April 20, 2021. The bill cleared the Senate Agriculture Committee today, April 22, 2021, paving the way to move to the Senate floor. Amid numerous proposals for climate related legislation, many of which only have support from one party, this bill stands out with an extensive and bipartisan group of primary sponsors and cosponsors[1], and has a farmer-focused approach. The legislation includes efforts to ensure that farmers have access to carbon markets and are rewarded for contributions to climate solutions.

Greenhouse gases (GHGs) emitted into the air are one contributor to climate change. The primary GHG of concern is carbon dioxide, which is absorbed and emitted through various natural processes and human activities (see EPA, Climate Change Science). As part of their annual estimates of man-made GHG emissions in the United States, the Environmental Protection Agency reports carbon dioxide was 80% of total GHG emissions in 2019 (see EPA, GHG Inventory Data Explorer).

The EPA provided estimates of GHG emissions by economic sector in 2019 (see Figure 1). Together, the transportation (28.6%), electricity generation (25.1%), and industry (22.9%) sectors accounted for more than three quarters of total GHG emissions. Agriculture contributed to 10.2% of GHG emissions. 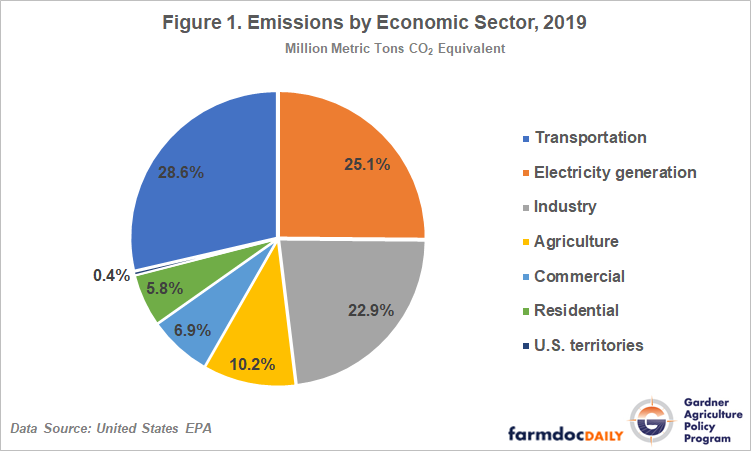 The emissions profile for agriculture differs from other economic sectors as well. In 2019, nitrous oxide and methane made up 58% and 41%, respectively, of GHG emissions from agriculture, while carbon dioxide made up 1% (see EPA, GHG Inventory Data Explorer).  At the same time, GHG emissions directly impact the environment in which farmers operate. Climate change has the potential to affect agricultural productivity by altering patterns in rainfall, temperature, pest pressure, and climate extremes such as drought (see ERS). In general, farmers have a natural desire to be part of the climate solution by sequestering carbon. The United States Department of Agriculture Natural Resources Conservation Service Greenhouse Gas and Carbon Sequestration Ranking Tool currently lists thirty-five farm and land practices with beneficial attributes for sequestering carbon (see USDA, NRCS).

As a result markets organized by publicly and privately-owned companies have emerged, offering farmers payment for carbon sequestration practices, and there are many factors for farmers to consider (farmdoc daily April 13, 2021). Farmers may be unsure as they look to the government and other credible sources for additional information about carbon markets and regulation and consistency in the carbon markets. Currently, the Federal government is still debating climate policy in general and what their involvement in carbon markets may be. A first step likely is the Growing Climate Solutions Act.

The Growing Climate Solutions Act includes protections for farmers interested in participating in voluntary carbon markets (see full text at Law Library of Congress). Its primary purposes are to encourage sustainable farming practices by providing farmers access to private-sector capital, facilitate participation in carbon market programs, and provide technical assistance to farmers and landowners who wish to bet involved in the carbon market or other GHG markets.

The bill would establish a GHG technical assistance provider and a third-party verification program. The technical assistance provider is defined as providing technical expertise, information, and tools necessary for farmer to participate in carbon markets. Through a third-party verification program, a set of standards for operation in the carbon markets would be established. The goal of both components is to ensure a transparent and systematic science-based approach to quantify, monitor, report, and verify sequestration or emission reductions.

The proposed legislation would also establish an Advisory Council; specifically, the GHG Technical Assistance Provider and Third-Party Verifier Certification Program Advisory Council. The Advisory Council would assist the Secretary of Agriculture in establishing the standards for operation of voluntary carbon markets. The council would include at least twenty-four members with representation from the EPA, agriculture industry, forestry industry, the scientific research community, and private GHG market experts, among others.

Farmers can currently receive compensation for sequestered carbon through markets created and administered by various public and private entities. The function, administration, and compensation vary considerably among these markets. Proposed legislation through the Growing Climate Solutions Act would establish standards for these markets and provide a program for third-party verification. If passed, farmers could expect to have clearer focus on carbon market. Farmers could also expect a more consistent approach among market options and moderation of the factors that may currently be keeping them from participating in markets.