Returns and rent levels for cash rent, share rent, and variable cash arrangements are shown for high-productivity farmland in central Illinois. Historically, changes in cash rent levels lag changes in farmland returns. By design, share rent and variable cash rents adjust more quickly to economic conditions than cash rents. Higher returns in 2020 and projected higher returns in 2021 likely will result in upward pressures on 2022 cash rents. Whether that is warranted is questionable. If aligning rental rates with returns is desired, variable leases can flex to make adjustments in periods of fluctuating agricultural returns.

Operator and land returns for high-productivity farmland in central Illinois are shown as bars in Figure 1. Historical returns are summarized from farms enrolled in Illinois Farm Business Farm Management (FBFM). Revenues and costs before 2019 are reported in the publication Revenue and Cost for Illinois Grain Crops). The returns in Figure 1 were calculated using a 50% corn and 50% soybean rotation.

Cash Rent:  This line represents the average cash rent for high-productivity farmland in central Illinois.  Under a cash rental arrangement, the farmer makes a fixed payment to the landowner, with the payment level negotiated before the growing season (see Cash Rent Leasing Fact Sheet for more information). Under a cash rent, the farmer receives all revenues and pays all costs. Cash rents can vary tremendously across parcels for the same productivity of farmland. For each yearly average, there is at least a $50 plus and minus range around that year’s cash rent.  For example, the average cash rent in 2019 is $275 per acre.  There will be some rents $50 higher at $325 per acre and some rents lower at $225 per acre.

Share Rent: This line shows the average for a 50-50 share rent. Under a share rent arrangement, the farmer and landowner share in revenues and direct costs (see Share Rent Leasing Fact Sheet). All crop revenue, government payments, and crop insurance proceeds are split between the farmer and landowner.  Direct costs that are shared include fertilizer, seed, pesticides, drying, storage, and crop insurance premium.  Rents shown in Table 1 are calculated using a split of 50% to the landowner and 50% to the farmer, a typical arrangement for northern and central Illinois. Other splits, or additional terms to the lease, will cause different levels than shown in Figure 1.

Variable Rent: The variable rent line shows rent levels for one type of variable cash lease. There are many different types of variable rents, with a general characteristic that the cash payment varies based on crop revenue levels (see Variable Cash Rent Leasing Fact Sheet).  For Figure 1, the landowner receives a 32% share of corn crop revenue and a 39% share of soybean crop revenue, resulting in an average split of 35.5% across both crops. 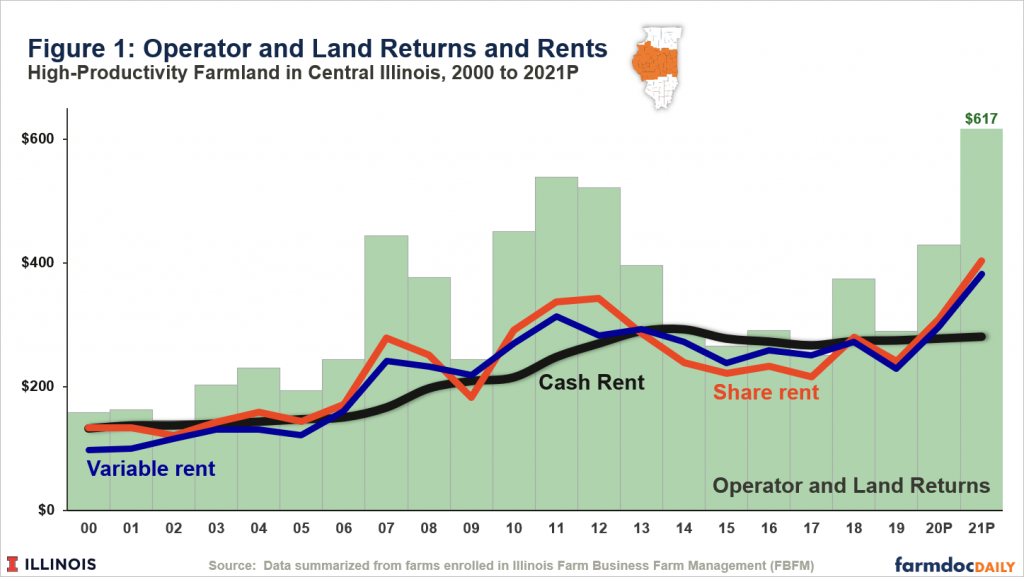 The variable lease in this example only includes crop revenue in its calculation. Government payments or crop insurance proceeds were not included in rental calculations. Splits used in variable rent leases vary across leases. As a result, those rents can vary from those shown in Figure 1.

Data behind Figure 1 are shown in Table 1.  Table 1 also shows average returns for periods described in the next section. 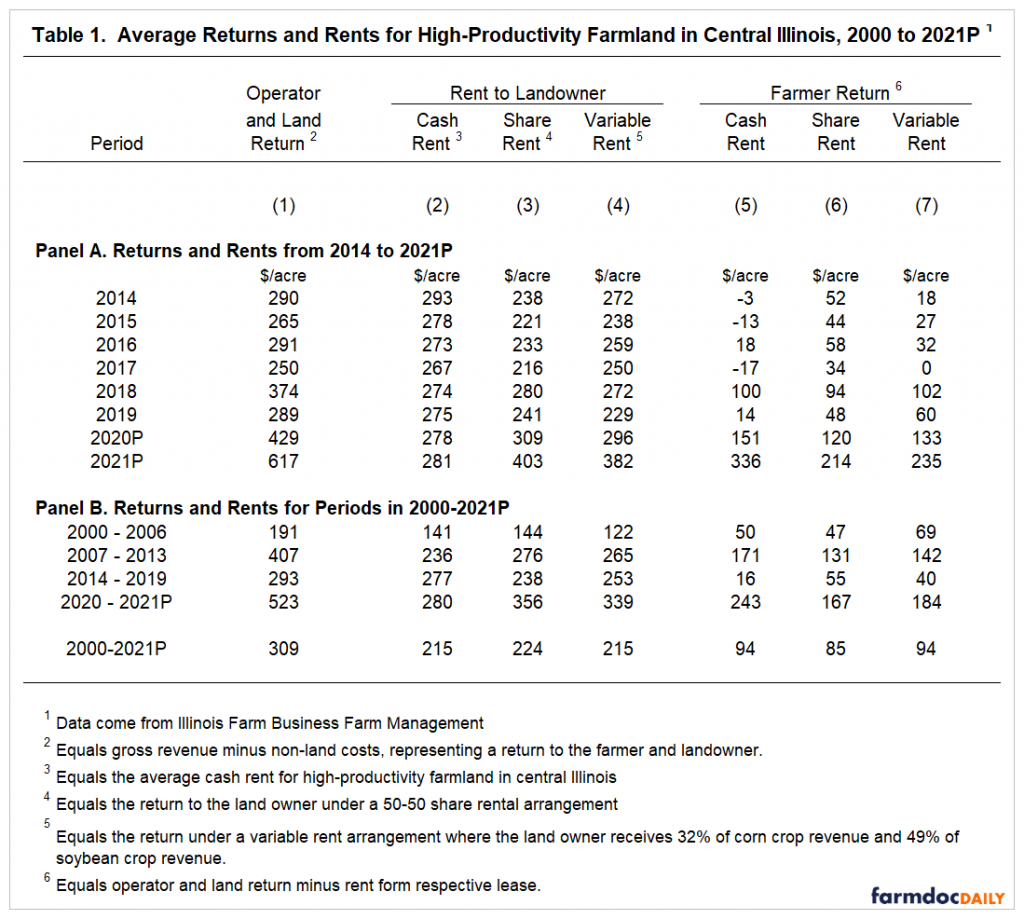 However, the relationship between returns and rents varies over time.  We divide the years from 2000 to 2021 into four periods:

While the 2000-2021 averages are close to one another, yearly rents vary across the leases. In general, cash rents have lagged changes in returns. Cash rents did not go up as fast as returns during the 2006-2013 period, nor come down with lower returns from 2014-2019. Cash rents did not rise much in 2020 and 2021. In contrast, share and variable rents adjust more quickly to changes in return levels.

Given history as a guide, higher returns in 2020 and 2021 likely place upward pressures on cash rents. Whether that is justified depends on perspective. At average cash rent levels, farms had low and negative returns from 2015 through 2019, and the higher returns in 2020 and 2021 could be viewed as a period of catch up. Average farmer returns for 2014-2021P for cash rents still are lower than average returns from share rents, and a period of lower commodity prices after 2021 could cause farmer returns to fall again.

It seems likely that cash rents will always lag adjustments in returns. If this is a concern, use of a share rent or variable lease will cause faster adjustments, both up and down.

This article has used projections for 2021 and much can happen between now and harvest. How much upward pressures exist on cash rents for 2022 and beyond will depend on whether projected current higher prices hold through the fall.