Projections for the safrinha corn (second crop) in Brazil were reduced as the drought continued in the main producing regions, and more recently frosts seen in South-Central. The most recent forecast from the Safras & Mercado, a private consulting firm in Brazil, indicates that Brazil will harvest 2,425 million bushels this season. Expected reduction in 2020 is down 16% percent from last year’s safrinha corn. Meanwhile, the average cash price in May set a record in real terms in the Brazilian market and was the highest since 2004. The harvest has already started and goes until the end of August.

The 2021 second crop production forecast was scaled back because of dry conditions in South-Central Brazil in recent months. Safras & Mercado cut its forecast to 2,425 million bushels, 27% less than the company’s projection of 3,308 million bushels, made on Jan. 15, when planting of the safrinha began (see Figure 1). 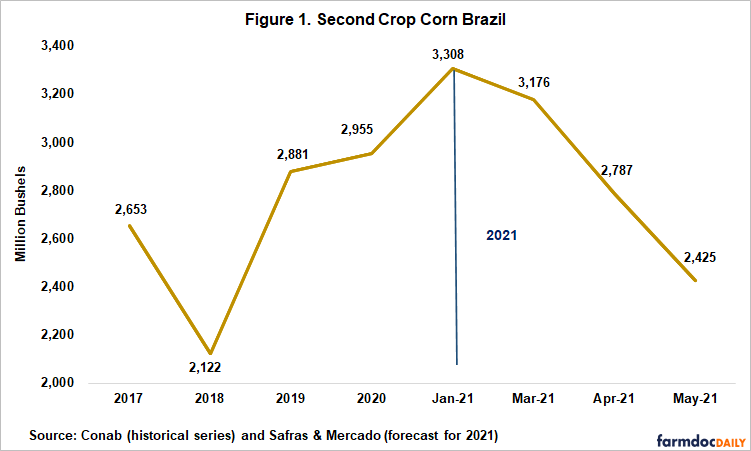 Planting of the safrinha was delayed because of excessive rainfall during the soybean harvest in February. After that, fields were abnormally dry in Paraná, São Paulo, Mato Grosso do Sul, Goiás, Mato Grosso and Minas Gerais. Rain in June was not enough to reverse the losses. The projected average yield is now 67.9 bushels per acre, 23% less than the average of 87.9 bushels per acre in 2020. In addition, the frosts seen in Brazil’s Paraná, Mato Grosso do Sul and São Paulo, on June 29 and 30, should increase the safrinha corn losses. Damage still being assessed, but the quality will also be an issue.

In June, the safrinha harvest started late in Mato Grosso, Brazil’s largest corn producing state. Until June 25, almost 10% of the area in the state had been harvested, according to information from the Mato Grosso Institute of Agricultural Economics (Imea). In the same period last year, farmers had already harvested 30% of the area. So far, the forecast for the second crop in Mato Grosso is 1,260 million bushels, 10% less than last year, according to Imea. The estimated average yield is 83.69 bushels per acre, 14% less than last year’s average.

In May, the average cash price for a 60 kg bag of corn was BRL 100.72 (USD 19.03) on the Esalq/BM&FBovespa index, a record in real terms in historical series (which began in 2004) of the Center for Advanced Studies in Applied Economics (Cepea/University of São Paulo). For reference purpose, a BRL price of 100.72 per 60 kg bag of corn is equivalent to USD 8.42 per bushel. These data were deflated using the General Price Index – Internal Availability (IGP-DI) from March 2021, measured by the Getulio Vargas Foundation, from Brazil. 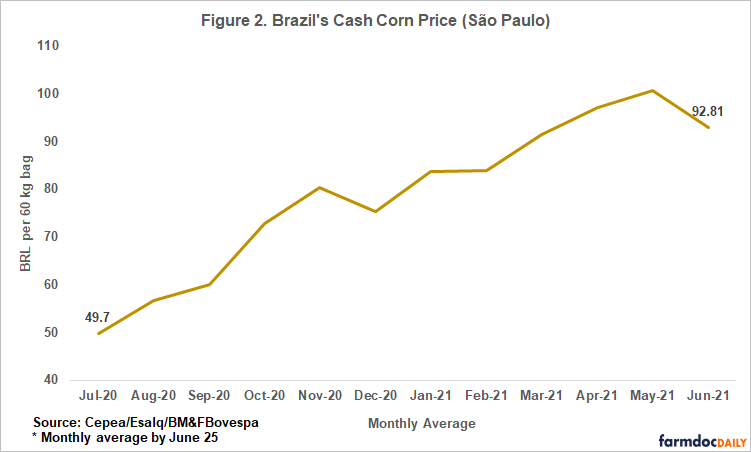 The uptick in the price of corn in Brazil is directly related to internal and external factors. First, international demand increased, and, consequently, pushed prices up. China, for example, bought a large amount of corn from the United States in the first months of the year. The Chinese purchase, in turn, may have led Arab countries to buy more corn from Brazil in 2021. From January to May, Egypt was the number 1 buyer of Brazilian corn.

In addition, corn producers limited the volume of new sales because of concerns about the impacts of the drought on crop yields. Brazilian farmers currently do not need to sell their corn stocks, as they have achieved a good profit margin with soybeans. So far, Brazilian producers have already sold more than 50% of the second crop. Therefore, a reduction in purchase inquiries drove corn prices up more than had been expected.

The historically high corn prices in Brazil correlate with highs in prices on the Chicago Mercantile Exchange (CME). Corn futures traded in Chicago in May were the most expensive since June 2012, surpassing USD 6 per bushel. While corn growers are enjoying the higher prices, poultry and pig farmers are feeling the effects of the higher cost of grain-based animal feed.

To create an alternative for meat industries in face of the recent rise in soybean and corn prices, Brazil’s government published a new regulation to align rules for genetically modified (GMO) crops with global standards. It will make it easier to import more GMO soybean and corn from the United States. Under the new rules, which goes into effect on July 1st, crops with different genetic modifications can be transported in the same ship, provided each modification is already approved. The United States, the world’s biggest corn exporter, is seen as Brazil’s most likely grains provider outside the Mercosur.

The high cost of production in the domestic market has led many Brazilian chicken and pork producers to import corn from other countries, especially from Paraguay. In April, the Brazilian government lifted the tax on products imported from outside of Mercosur countries (Argentina, Brazil, Paraguay, Uruguay and Venezuela). From January to May 2021, Brazil imported 820.4 thousand tons of corn, 78.4% more than the same period last year, according to data from the Ministry of Agriculture, Livestock and Supply (Mapa). This was the second largest volume in the 10-year period (see Figure 3). 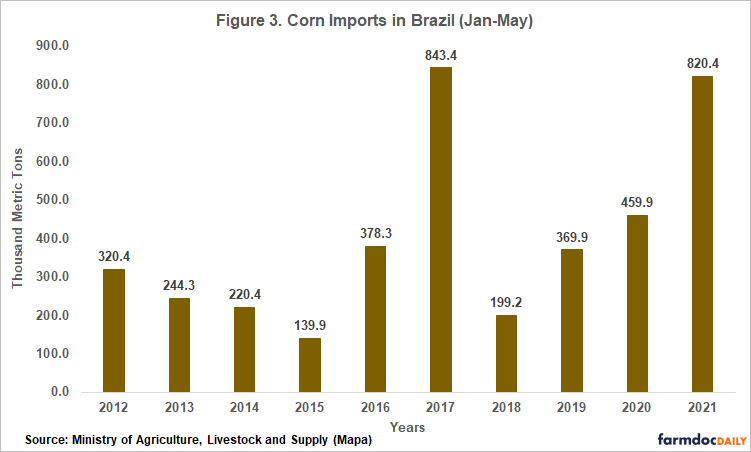 By the end of 2021, imports are forecast to reach 3 million metric tons, more than double the previous year. The likely arrival of U.S. corn in Brazil in July should help to alleviate concerns to supply animal production. On the other hand, the measure is expected to have a limited impact on domestic prices. High parity prices still make it difficult to buy large amounts of American cereal, according to market analysts. In addition, the harvest of safrinha corn should help to avoid new price booms in the Brazilian market. Even though, the trend is for the price of corn to remain high in Brazil in 2021 due to strong national and international corn demand.

The safrinha corn production forecast was cut once again due to dry conditions in South-Central Brazil in recent months. Meanwhile, the average cash price set a record in real terms in the Brazilian market. International demand increased pushing prices up. Corn producers limited the volume of new sales because of concerns about the impacts of the drought on crop yields. To create an alternative for meat industries in face of the recent rise in prices, Brazil’s government published a new regulation to align rules for GMO crops. The measure, which goes into effect on July 1st, will make it easier to import more soybean and corn from the U.S. Despite that, forecasts are that high prices will remain the rest of the year in the Brazilian market.