Most grain farms in Illinois over 500 acres rent most of their land base.  Moreover, the majority of rented farmland is controlled by larger acreage farms.  In 2017, farms of over 1,000 acres farmed 60% of rented farmland, with one-third of rented acres controlled by farmers over 2,000 acres.  This has important implications in conservation adoption. Some conservation practices have short-run costs, generally paid by the farmer, with the potential of long-run returns. Farmer tenants may be hesitant to make conservation investments on rented farmland because farmland leases often require an annual renewal. Success in having these practices adopted depends on properly incentivizing farmers and landowners in partnership, including the larger-acreage farms that are farming a majority of rented farmland.

Data from the 2017 Census of Agriculture indicates approximately 60% of the farmland in Illinois is rented. Farmland rental occurs when one individual or party owns farmland and rents that farmland to another party who farms the land.

The 60% of farmland rented in Illinois is high compared to other states. Over the entire nation, 40% of farmland is rented. Midwest states have a higher percent rented. Even in the Midwest, Illinois has one of the highest percent rented. Compared to the 60% value for Illinois, 54% of the farmland is rented in Iowa and Indiana, 45% in Minnesota, and 44% in Ohio (see Bigelow et al., page 16). Illinois’ high rental percentage likely goes back to settlement patterns in the 19th century.

Few consistent time series on tenure exist, but those that do provide evidence that the percentage of farmland rented has not changed much over time. The percent of farmland rented in the U.S. has been just under 40% for the census years in 2002, 2007, 2012, and 2017 (see Economic Research Service).

Each year, Illinois Farm Business Farm Management (FBFM) computes the percent of acres rented by Illinois grain farms in northern, central, and southern Illinois. There are no discernible trends in rental percentages from 1995 to the present (see Figure 1), with the percent rented in 2020 being 82% in northern Illinois, 85% in central Illinois and 82% in southern Illinois. Differences across Illinois likely result from earlier historical settlement patterns and the fact that rental percentages are typically higher in high productivity areas (see Bigelow et al.). 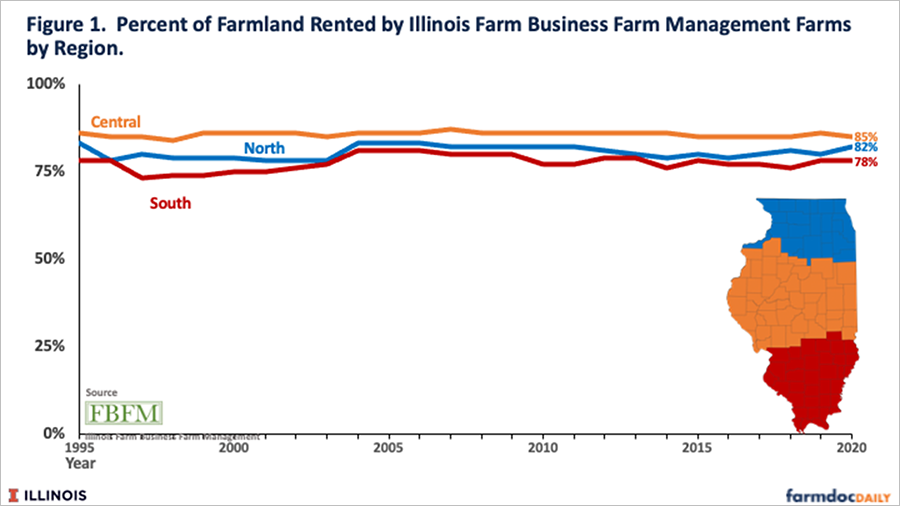 FBFM’s average rental percentages between 82% and 85% are higher than the 60% reported by the U.S. Department of Agriculture. Much of this difference relates to farm size. Figure 1 reports averages for farms classified as grain farms, which have over 50% of the revenue from grain operations. Typically, these farms have more rented acres than would be the average of all farms. 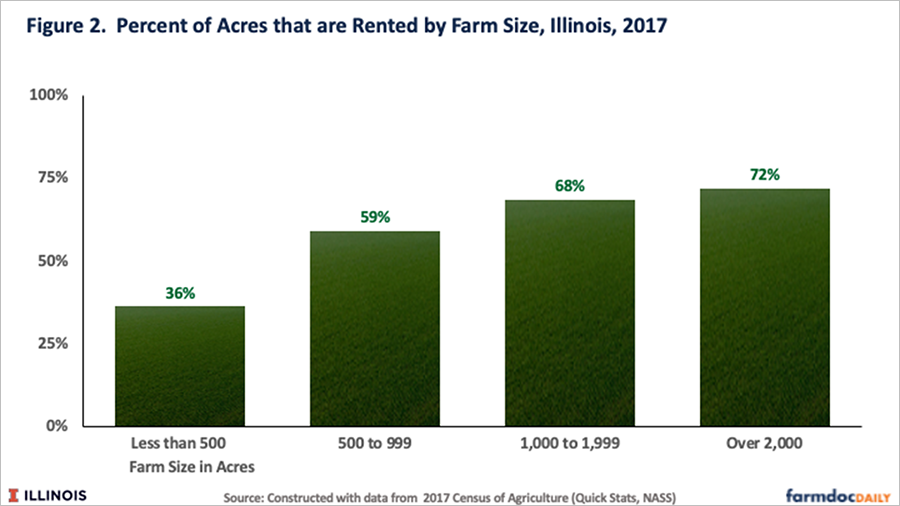 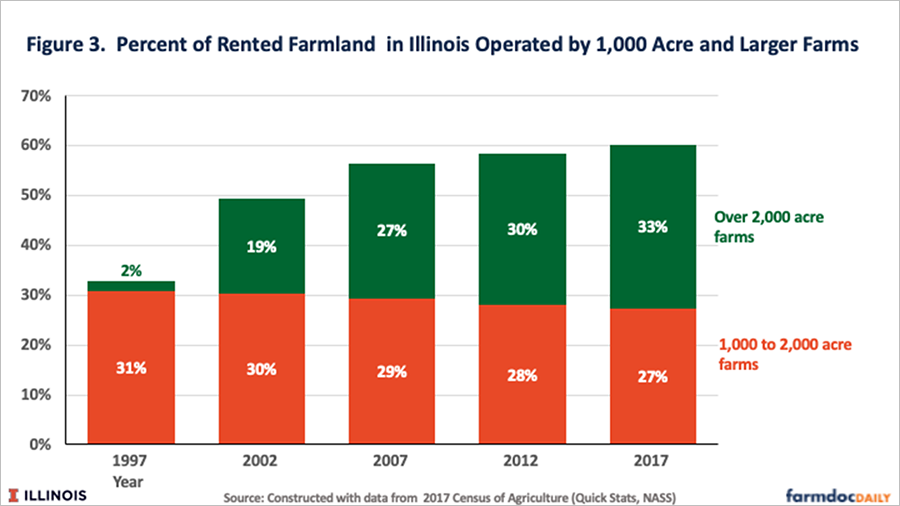 Much of the reason that farms reached the 1,000-plus-size categories is that they rented more farmland. For a variety of reasons, these farms managed to out-compete other farms for rented farmland. As a result, these farms now have more of their revenue dependent on rented acres and are now more impacted by changes in rental markets. Furthermore, increases and decreases in rental rates will have a larger proportional impact on larger farms than smaller farms, all else being equal.

Many conservation practices — such as cover crops — have costs in the short-run, but also have environmental benefits, and the possibility of long-run economic benefits.  Farmer tenants may be hesitant to make conservation investments on rented farmland, particularly because farmland leases often require an annual renewal. The annual renewal result in farmers bearing short-run costs without assurance of long-term benefits.  Achieving greater adoption of conservation practices on rented farmland may require leasing adjustments, some of which could be longer-term agreements or additional partnership between landowners and farmer tenants.

On rented land, public policies that wish to incentivize these practices need to consider two parties:  landowners and farmer renters.  Both parties need a knowledge of benefits and costs of environmental practices.  Covering short run cost will also likely need to be considered.  Having the farmer bear all the short-run costs while not having the assurance of benefits in the future likely will not succeed.  Moreover, an exclusion of large farms from incentives could complicate conservation adoption on rented farmland. Designing rental arrangements and public policy will present challenges.

Sherrick, B. "Farmland Turnover in Illinois." farmdoc daily (2):231, Department of Agricultural and Consumer Economics, University of Illinois at Urbana-Champaign, November 29, 2012.