Seed costs for corn have trended up over time. Genetic improvements and biotechnology use in hybrids have led to higher yields, contributing to the general increases in seed prices and per acre seed costs. Seed costs also are positively associated with increases in expected revenue from corn production. As a result, per acre seed costs in the U.S. likely will increase in 2022. 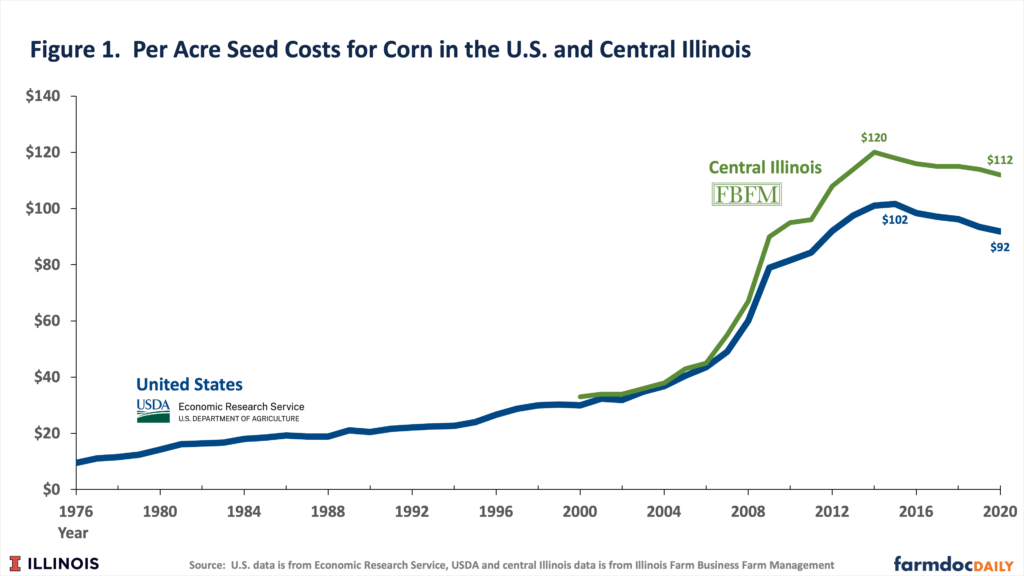 These costs come from two independent sources using different data collection methods. As shown in Figure 1, per acre seed costs from USDA and FBFM follow each other closely. For the years in which both sources give data — 2000 through 2020 — the correlation coefficient between the two series is very high. Farms in central Illinois have higher per acre seed costs, most likely due to higher yield potential in central Illinois compared to the U.S. For example, the trend yield represents a pre-growing condition forecast of yields (see farmdoc daily, April 27, 2021 for an explanation of trend yields). In 2020, the expected yield for FBFM farms in central Illinois was 220 bushels per acre, compared to 174 bushels per acre for the U.S.

Three periods of seed costs are evident in Figure 1. From 1975 to 2005, per acre seed costs increased steadily, with an average per acre increase in the U.S. of $1.13 per year.

The third period constituted a lower commodity price period, corresponding with leveling growth of corn use in ethanol. During the 2015 to 2020 period, seed costs declined slightly from $102 in 2015 to $92 in 2020.

Corn prices moved higher in late 2020 and have persisted through 2021. Historical relationships would suggest that those higher corn prices could lead to higher seed costs in 2022.

A statistical evaluation was conducted to determine the factors impacting per acre seed costs in the United States. U.S. data were used rather than central Illinois data because a longer time series exists for U.S. data. Two factors explained over 90% of the variability in per acre seed costs. 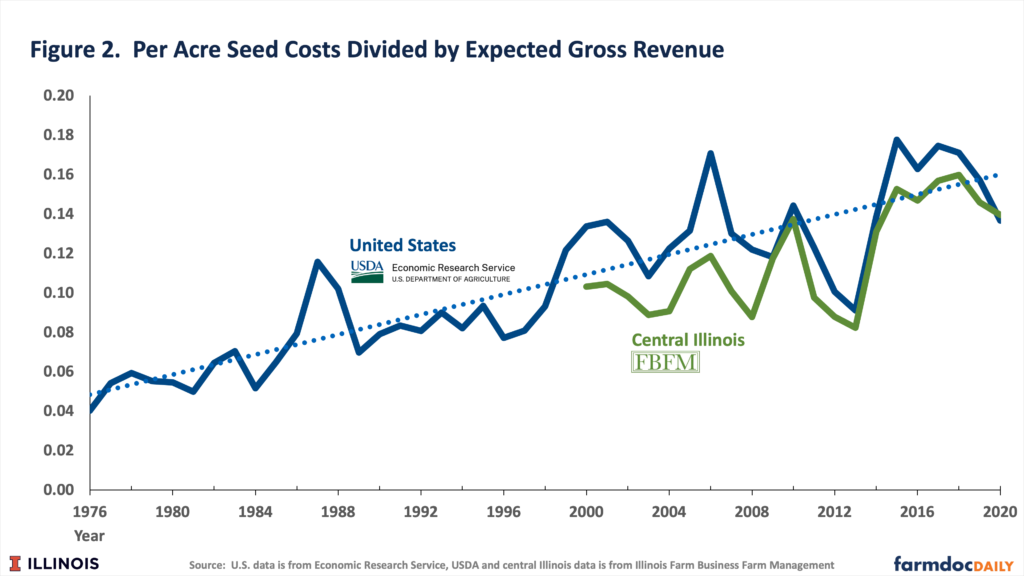 A number of reasons can be given for increasing seed costs over time. Hybrids have continually increased in yield leading to a higher value for seed. Moreover, biotechnology traits in corn hybrids have led to management advantages over time, which could lead to reductions in pesticides and tillage costs. Over time, hybrids have become more specialized to a geographical area and soil type. For all these reasons, seed and genetic improvements in seed have become more valuable over time.

In addition, seed and crop genetics have become increasingly concentrated. Over time, many seed companies have consolidated and merged. Now three companies — Bayer, Corteva, and Syngenta — have a large share of biotechnology traits and have large investments in crop genetics. The role of competition in seed pricing is not well understood. Still, the consolidation trends reduce the number of firms competing with one another for a share of farmers’ purchases.