US crop agriculture is on an evolutionary path to fewer acres. Supporting evidence is discussed. This path points to an important strategic question for both the US and US agriculture: “Is yield enhancing research sufficient to maintain the current size of the US crop sector?” 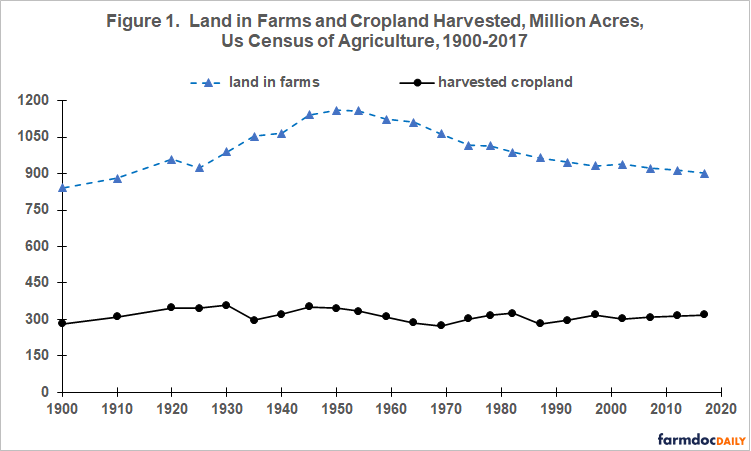 The US crop sector has had two extended periods of prosperity since 1950: 1973-1980 and 2007-2013. Harvested cropland increased during both periods; but the increase was markedly smaller in 2007-2013: 17 vs. 53 million acres using data from the Censuses that bracket these periods (see Figure 2). A key reason is operational differences between annual land set asides, the primary land removal program of the late 1960s and early 1970s, and conservation programs, the primary land removal program since the 1985 farm bill. 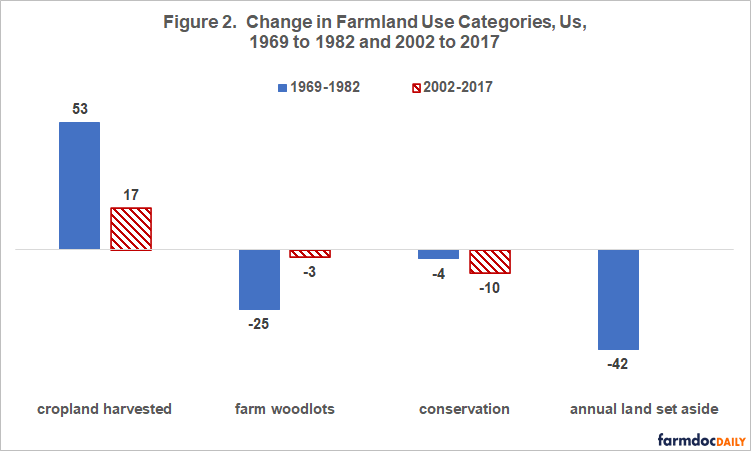 Annual land set asides were a requirement that farmers had to meet in order to qualify for commodity program payments. Share of land to be set aside was determined each year based on farm bill provisions and supply-demand balance. Set aside land totaled 50 million acres in the 1969 Census vs. 8 million acres in the 1982 Census. A slippage factor existed between land in set asides and subsequent change in harvested acres (Dvoskin, 1988), but land set asides in the late 1960s and early 1970s represented a sizable reserve of land that could quickly return to production.

Post-1985 conservation programs contract land for multiple years. The largest conservation program is CRP (Conservation Reserve Program). Its most common contract length is 10 years. Once a CRP contract reaches maturity, a land owner can decide to reenroll it in CRP or crop the land. Even during periods of prosperity, it can be economically rationale to reenroll if expected return over the next 10 years is higher from CRP than from the market. Despite high crop profits in 2007-2013, CRP acres declined only 30% between the 2002 and 2017 Censuses (33 to 23 million acres).

The role of farm woodlots also differed between the two periods. Acres in farm woodlots were 25 million fewer in the 1982 vs. 1969 Census but only 3 million fewer in the 2017 vs. 2002 Census. Sodbuster and swampbuster provisions enacted in the 1985 farm bill are a key reason for the difference. These farm program provisions restrict bringing previously non-cropped land and wetlands into production. Unless permission is granted, farm safety net benefits can be lost. In the case of wetlands, other wetlands need to be created.

The transition from annual land set asides to voluntary conservation programs has materially reduced the ability of the US to expand acres in response to profits from crop production, as a comparison of the 1973-1980 and 2007-2013 periods of prosperity illustrates.

Given US agricultural abundance, it appears US policy is moving in the direction of being willing to buy land out of crop production for environmental benefits even when crop profits are not low.

This policy shift adds to the conversion of cropland not only for traditional urban and travel uses but also more recently to alternative energy production, such as solar farms.

The point is not to criticize. Policy decisions are expressions of the majority national political will while CRP decisions are voluntary and likely return maximizing.

The point is to ask the US crop sector to consider the situation, including the not absurd scenario that US crop acres may start to shrink nontrivially, and to ask if a strategic response is in order.

A potential strategic response is to shift public crop research from a yield to multi-cropping focus. If yield can be maintained, multi-cropping each acre offers the potential to grow both US crop output and sector as well as increase land for environmental uses, including carbon sequestration.

Reinforcing the preceding point is the rapid growth in double, even triple cropping in South America, particularly Brazil (see Colussi and Schnitkey, 2021). Shifting public crop research to a multi-cropping focus may thus be critical to maintaining competitiveness of US agriculture with agriculture located in more tropical regions.