The Office of the Chief Economist of the U.S. Department of Agriculture recently revised 2021 market year average (MYA) price projections to $5.45 per bushel for corn and $12.90 per bushel for soybeans. For both corn and soybeans, the 2021 prices are the third-highest price since projections have been made, likely leading to high 2021 farm incomes, particularly in the eastern corn-belt. Given historic relationships, high 2021 prices should not necessarily be expected in future marketing years.

USDA calculates Market Year Average (MYA) prices for corn, soybeans, and the other major U.S. crops. Prices reflect cash proceeds from spot and forward delivery sales made by farmers. Not included are hedging gains or losses from futures and options trading. As such, the MYA price reflects the average cash price received by farmers for the U.S. crop.

MYA prices serve as useful and important indicators of prices that farmers are receiving in the U.S. Moreover, MYA prices have significance in that they enter into the calculation of Farm Bill commodity title payments from the Price Loss Coverage (PLC) and Agriculture Risk Coverage (ARC) programs.

The Office of the Chief Economist (OCE) releases market information and MYA price projections in its monthly World Agricultural Supply and Demand Estimates (WASDE) report. In the September 2021 report, the 2021 MYA projection was $5.45 per bushel for corn. This September projection is lower than the $5.70 projection made in the May report, the first projection of 2021 MYA by the OCE. OCE’s estimate of MYA corn price has declined by $.35 since May. Still, a $5.45 MYA price would be the third-highest price in history. The 2012 price of $6.89 per bushel was the highest, and the 2011 price of $6.22 per bushel was the second highest.  The $5.45 forecast for 2021 is $1.00 per bushel higher than the 2020 forecast of $4.45 per bushel.  The 2020 forecast will be final at the end of September and likely will be very close to $4.45.

Commodity prices tend to have long periods in which prices do not trend up or down but vary around a long-run average (see farmdoc daily, April 22, 2016, March 29, 2011; and Choices). Both corn and soybeans did not trend up or down from roughly 1974 to 2006, varying around averages of $2.38 per bushel for corn and $5.98 per bushel for soybeans (see Figure 1). Changes in long-run plateaus usually are associated with a change in demand. For example, corn and soybean prices reached a higher level around 1974 because of increased crop export demand. A new plateau again was reached around 2006 because of increasing corn use in ethanol production, along with continuing strong export demand for soybeans. 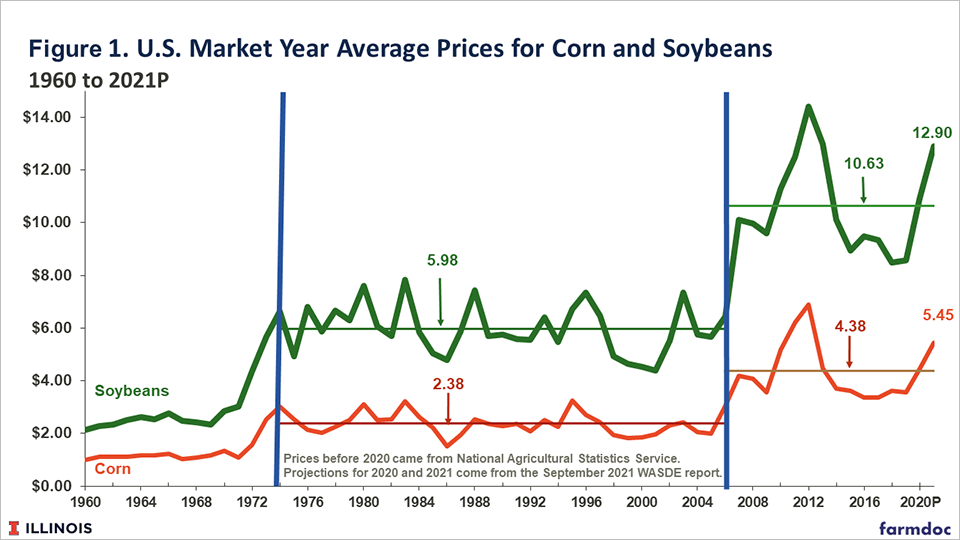 Without compelling evidence for a structural change leading to increased demand, there is a strong likelihood that the 2021 projection of $5.45 does not signal a new era of prices, and that corn prices likely are in the same regime that has existed since 2006. This would suggest that corn prices will continue to average near $4.38, and that there will be declining prices below $4.38 sometime in the future.

Similar to corn, the 2021 soybean projection of $12.90 likely does not signal that prices have reached a new higher plateau. Rather, soybean prices likely will decline in the future.

Current high prices likely are not harbingers of continued high prices in future years. Generally, a commodity price regime change occurs when demand conditions change. No long-term changes in demand can be identified at this point. Instead, supply responses and higher yields will likely lead to lower prices, and future prices of these commodities are expected to continue to vary around the 2007-2021 averages of $4.35 per bushel for corn and $10.64 per bushel for soybeans. Moreover, prices in the future will include periods when prices fall below these long-run averages, similar to the period from 2014 to 2019 when MYA prices averaged $3.53 per bushel for corn and $9.15 for soybeans.

Having noted the likely decline in prices, the timing of this decline is unpredictable, depending on the realization of supply and demand factors. As an example, MYA prices were at record levels of $6.22 for corn and $12.50 per bushel for soybeans in 2011, well above average prices. Another record of $6.89 for corn and $14.40 for soybeans was set in 2012, when a large drought in the Midwest caused low supplies. Similarly, a yield shortfall in 2022 could lead to higher prices than exist today. Other demand events also could impact prices.

Still, one should expect lower corn and soybean prices sometime in the future. As a result, prudent farm management should account for this possibility.

Irwin, S. and D. Good. "The New Era of Corn and Soybean Prices Is Still Alive and Kicking." farmdoc daily (6):78, Department of Agricultural and Consumer Economics, University of Illinois at Urbana-Champaign, April 22, 2016.