Farmers in Brazil began planting in September for what is expected to be a recording-breaking 2021-2022 harvest. The first projection from CONAB (National Supply Company in Brazil) projects farmers will produce 289.6 million tons of soybeans, corn, cotton, rice, and beans – accounting for nearly 95% of the total grain produced in Brazil. About 99 million acres are expected to be devoted to soybeans, and about 51 million acres to corn, both records. The projections are based on high international prices and profits in 2021, depreciation of the Brazilian real relative to the U.S. dollar, an expected increase in exports, and the profitability forecast for 2022.

Brazil is likely to remain the world leader in soybean production in the next crop year, followed by the United States and Argentina. Brazilian soybean acreage is expected to grow 3.6%, to 98.62 million acres, according to CONAB. Most of the acreage increase is expected to be the conversion of pasture to soybean acre. The 2021-2022 soybean crop in Brazil is projected to be 5,190 million bushels, the highest in the history, an increase of 3.9% over the previous harvest (see Figure 1). 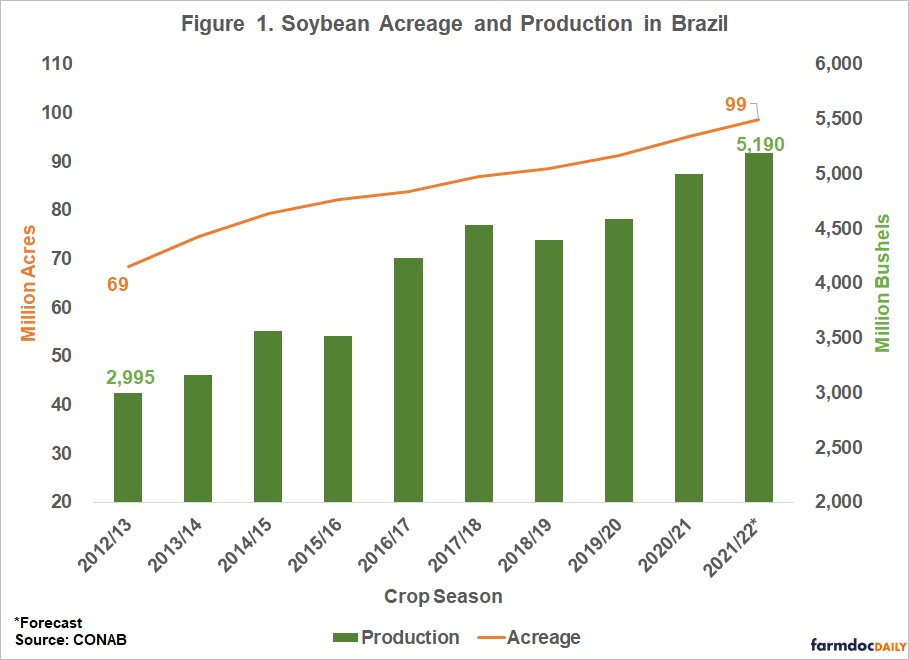 Historically high prices and profits in 2021, coupled with optimistic expectations for the next harvest and the depreciation of the real relative to the dollar, are motivating farmers to increase the acreage they plant. It is important to highlight that the price of soybeans in the Brazilian market is formed by the three following factors: international prices, port premium, and the dollar. All three factors are expected to remain high in 2022 because of the low world stock-to-consumption ratio, and the increase in domestic consumption.

As a result, Brazilian soybean exports and the crush are expected to increase in 2022, driving the increase in acreage planted. The demand for more biodiesel fuel and the high consumption of animal feed also are expected to fuel domestic demand in Brazil next year. The soybean crush is projected at 1,891 million bushels, a 10.7% increase over this year. Chinese demand and a weak real with a strengthening U.S. dollar will drive an increase in soybean exports. Soybean sales are projected to reach 3,218 million bushels next year, 5 percent higher than this year, according to CONAB report.

Factors that could lower production for next year’s soybean crop revolve around weather. Last year, a lack of rain during the planting season delayed the harvest, and the harvest, in turn, was delayed because of excessive rainfall. Despite the weather, Brazil harvested 4,994 million bushels, a record.

The 2021-2022 corn crop in Brazil is expected to increase by 3% for an estimated 50.9 million acres planted to corn, according to CONAB. High prices and lower corn supplies in Brazil this year because of weather problems are the main factors behind the projection. Drought reduced safrinha production – corn as a second crop – by 20%. As a result, corn production is expected to increase 33.8% in the next harvest, producing a record 4,563 million bushels (see Figure 2). 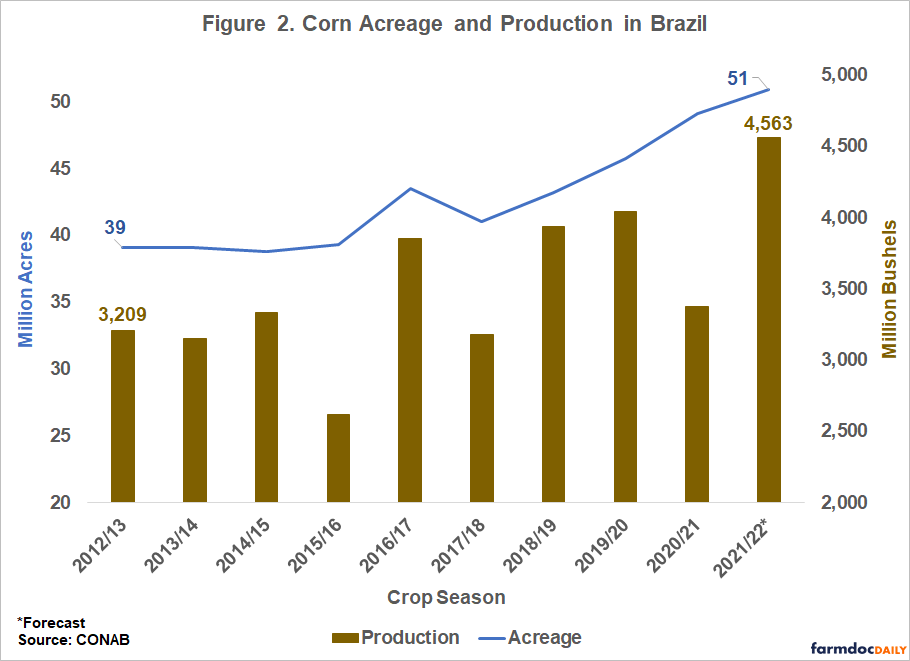 The increase in corn acreage should be more significant in the second crop (safrinha), because the increase in soybean production will limit the acreage planted in corn initially. The safrinha crop accounts for 71.7% of the total corn planted area, followed by first crop (26.7%) and third crop (1.6%). Over the past 20 years, second-crop corn production has risen thirteenfold, according to CONAB. In recent years, a third-crop corn season has emerged in north and northeastern Brazil (see farmdoc daily, April 12, 2021).

The motivation to plant corn in Brazil mainly comes from this year’s attractive prices. The cash price for a 60 kg bag of corn has risen more than 100% in 12 months. The uptick in the price of corn in Brazil is directly related to internal and external factors (see farmdoc daily, June 30, 2021). Corn futures in Chicago this year were the highest since June 12, surpassing $6 bushel.

In addition to high international prices, domestic grain demand in Brazil is expected to remain high in 2022 because of the need for animal feed and for ethanol. Ethanol producers in Brazil’s Midwest project increased demand for corn over the next 12 months. In addition, Brazil is expected to remain one of the largest suppliers of chicken and pork to Asia and the Middle East.

Spring planting started officially in Brazil on September 16 in states such as Mato Grosso, Goiás, and Paraná. The 2020-21 crop year was a hard one for farmers in South America to handle, especially in Brazil. The expectation is that the weather will be more favorable to agriculture this season. The risk of occurrence of the La Niña phenomenon is 70% this year, and the trend is for it to be of low intensity, according to the forecast from Climatempo, a private weather company in Brazil.

The rainy season typically is shorter during a La Niña event – as happened during the 2020-2021 growing season. La Niña-influenced weather also increases the risk of frosts and freezes, which occurred in three waves from late June to mid-July. Beneficial rains have fallen the past two weeks in the southern states of Rio Grande do Sul and Paraná. The wet season in Mato Grosso, the nation’s largest producer of corn and soybeans, typically begins about Sept. 26.

A distinct wet-dry season in Midwestern Brazilian states makes it possible to plant soybeans in the spring and corn in the summer, both in the same area. Soybeans, for example, are planted from September to November and harvested from January to March. The safrinha is planted after soybean season and harvested from June to August. Corn as a second crop is not possible in extreme southern Brazil because of lower winter temperatures.

Brazil is the United States’ major competitor in agriculture, with Brazil now producing more soybeans than the U.S. On September 23, at 11 am (CDT), as a part of the Farmdoc Webinar Series, the authors will discuss the current state of agriculture in Brazil and its future. To register for the webinar series, please visit the farmdoc website (https://register.gotowebinar.com/register/9001965996536331021)