Since the mid-1990s, the use of soybeans produced in the U.S. has grown more than corn use, primarily because soybean exports have been a resilient source of growth. Higher growth in soybean use has led to higher relative soybean prices that result in soybean profitability exceeding corn profitability over most of the past decade. Past trends likely have resilience into the future.  Even though corn is projected more profitable than soybeans in 2022, farmers may wish to continue to put more soybeans in their rotations over time.

Corn and Soybean Use in the U.S. 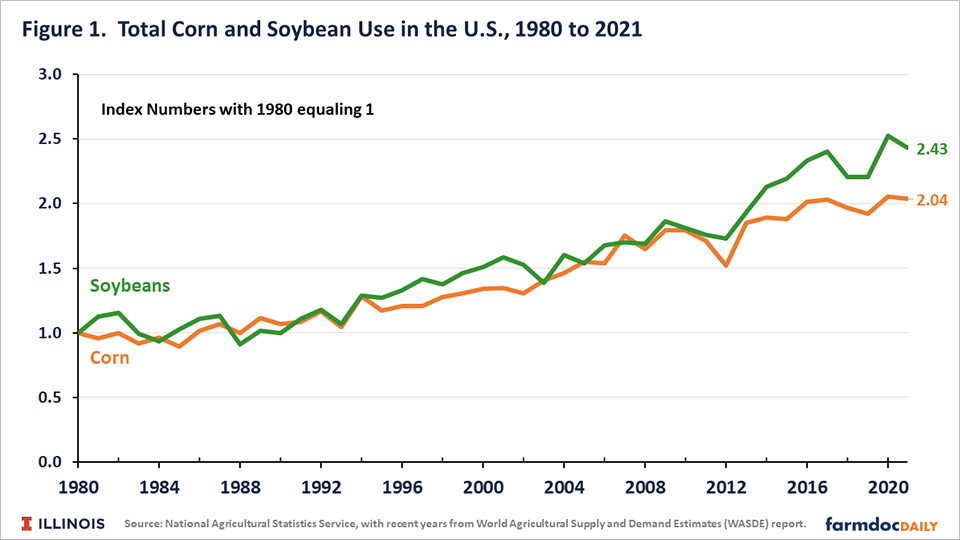 Since 1993, soybean use has exceeded corn use except for the 2004-2011 period. This 2004-2011 period could be viewed as an anomaly caused by the increase in corn used in producing ethanol, often known as the ethanol build. Figure 2 shows use categories reported in the monthly WASDE report: 1) food, seed, and industrial, 2) exports and 3) feed and residual. Ethanol falls in the “food, seed, and industrial’ category and represents between 75% and 78% of that category’s use in recent years. Note that ethanol production also provides livestock feed as distillers grain is a joint product of the ethanol production process, and about 30% of corn used to produce ethanol ends as distillers grains.  From 2004 to 2012, food, seed, and industrial grew from 25% of domestic corn use in 2004 to 54% in 2012. The ethanol build came to an end in the early 2010s. Since then, “food, seed, and industrial” have remained a relatively stable percentage of corn use ranging from 45% to 48% from 2013 to 2021. 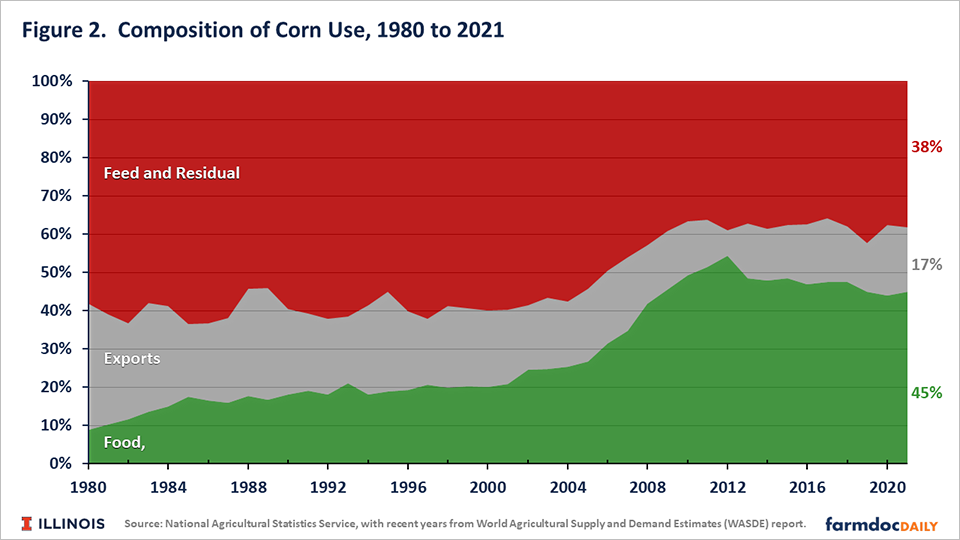 Corn’s pattern differs from soybeans (see Figure 3). The WASDE report divides domestic soybean use into two main categories: 1) exports and 2) crush. Crush involves taking soybeans and producing two co-products: soybean oil meal (SBOM) and soybean oil. In 2000, exports accounted for 38% of use and crush the other 62%. Exports have trended to be a growing percentage of use since 2000, with variations across years. In recent years, some of the variations relates to geopolitical events. In 2016, export use was 53% of use. That percent declined to 44% in 2019, with that decline being attributed to the trade war with China and swine production problems in China caused by African Swine Fever. Exports are projected at 51% for 2020 and 48% for 2021. 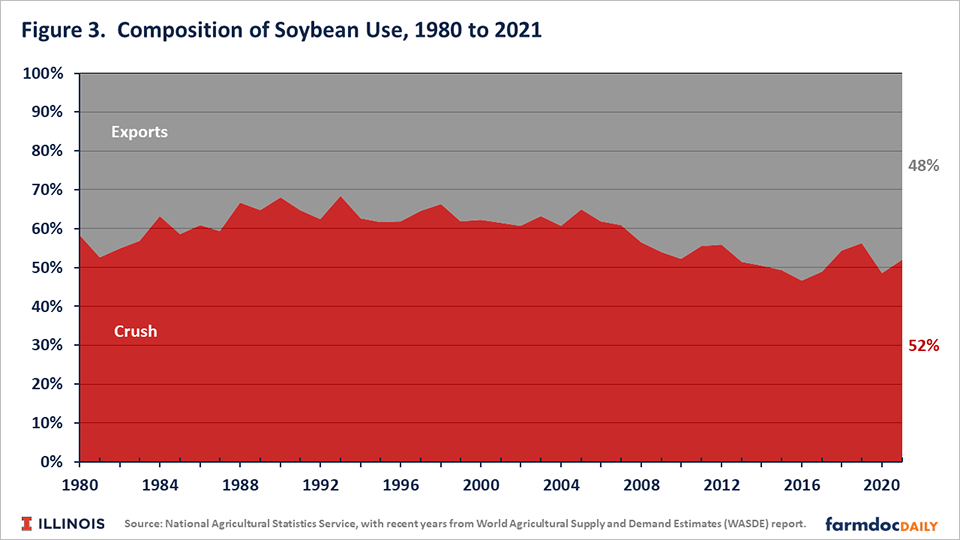 Causes of major growth in use differ for corn and soybeans. Corn use has increased due to the ethanol build, while soybean use has increased due to exports. The ethanol build for corn was more pronounced than growth in exports for soybeans, but the growth in corn use from expanding ethanol production has plateaued. Soybean’s exports have been more stable and could conceivably continue to grow into the near future. Growth in soybean exports comes primarily from demand for use as a livestock feed to produce meat as meat consumption rises in China and other developing countries.

These historical trends in use have the same pattern as acreage. Figure 4 shows planted corn and soybean acreage in the U.S. In Figure 4, index values are created by dividing yearly values by the respected crops 1980 value, similar to the construction of Figure 1. Growth in planted acres has paralleled those for use: 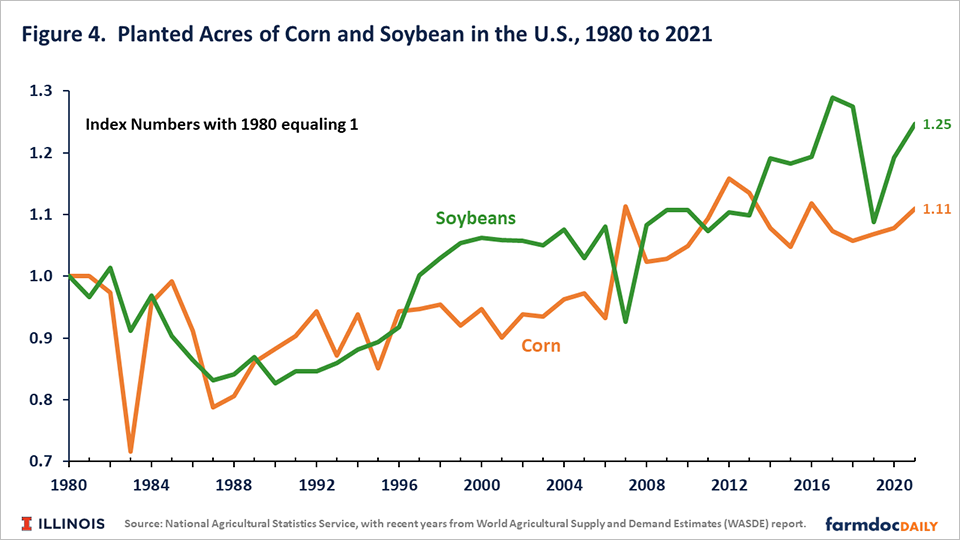 Changes in corn and soybean use then have impacts on relative corn and soybeans profitability. Figure 5 contains the use indices shown in Figure 1 but adds corn-minus-soybean returns from 2000 to the present. These returns are not available before 2000. Corn-minus-soybean returns measure the relative profitability of corn and soybeans, with positive values indicating that corn is more profitable than soybeans and negative values showing that soybeans are more profitable than corn. These values come from Illinois Farm Business Farm Management (FBFM) for high-productivity farmland in central Illinois (see farmdoc daily, November 2, 2021). 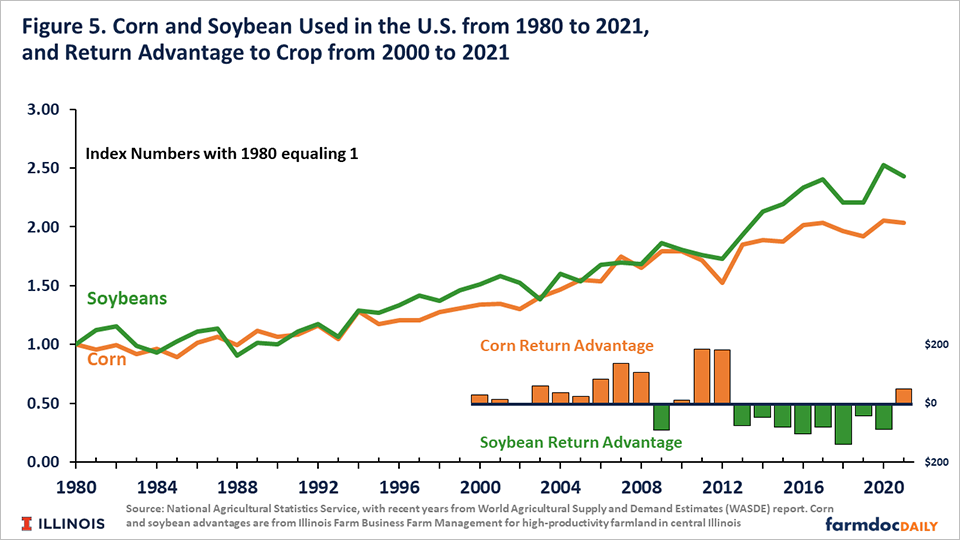 Growth in the Longer-Run

At this point, exports seem the most likely avenue of growth for both corn and soybeans. Export demand growth will not only impact each crop’s export levels directly but will also impact other uses of corn and soybeans.

Biofuels present another possibility for growth. Maintaining current corn use levels in producing ethanol is likely achievable, but continued growth is not assured. There is potential for oil from soybean crush to be used in the production of biodiesel. A movement in this direction likely has positive impacts on soybean use.

Currently, corn is projected to be more profitable than soybean in 2022, counter to years from 2013 to 2019 when soybeans were more profitable than corn. Over the next five years, growth in soybeans and corn use will likely be driven by exports. In the past, exports have had a larger direct impact on soybean use relative to corn. Past trends do not have to continue in the future, but continuing growth in soybean exports seems reasonable. As a result, relatively more soybean acres will be needed in the future compared to corn acres.

These trends lead to two suggestions for farmers. First, farmers will have to continue to watch export demand to gain insights into likely changes in corn and soybean relative profitability. That examination needs to not only include soybean exports but also 1) corn exports and 2) meat and livestock exports. Second, export demand will likely continue to favor soybeans, and farmers need to consider adjusting rotations in the face of this reality.