Soaring fertilizer prices will impact Brazil’s largest corn crop, which will be planted starting in January 2022, after the soybean harvest. Many farmers haven’t guaranteed their fertilizer needs yet for the second crop corn, known as “safrinha”. Although returns are likely to be lower than last year because of rising production costs, farmers are not expected to reduce the area planted in corn, but they are expected to reduce how much fertilizer they use. Brazil is the world’s fourth largest consumer of fertilizers (behind China, India, and the United States) and usually imports about 80% of its fertilizer requirements.

Exchange Ratio of Corn to NPK

In recent months, fertilizer prices have significantly increased globally. In Brazil, as in the United States (see farmdoc daily, October 19, 2021), fertilizer prices are rising to near historical levels, causing uncertainties relative to the 2021/2022 crop. For example, from January to September 2021, the exchange ratio of a 60 kilogram (kg) bag of safrinha corn to NPK (nitrogen, phosphorus, and potassium) and urea for one hectare increased 92% and 60%, respectively, according to Cogo Intelligence in Agribusiness, a private consultancy in Brazil (see Figure 1).  The ratio measures value of a 60 kg bag (2,36 bushels) of safrinha corn relative to fertilizer cost per hectare. In other words, it is the number of bags of corn that are needed to buy fertilizer to cover one hectare. 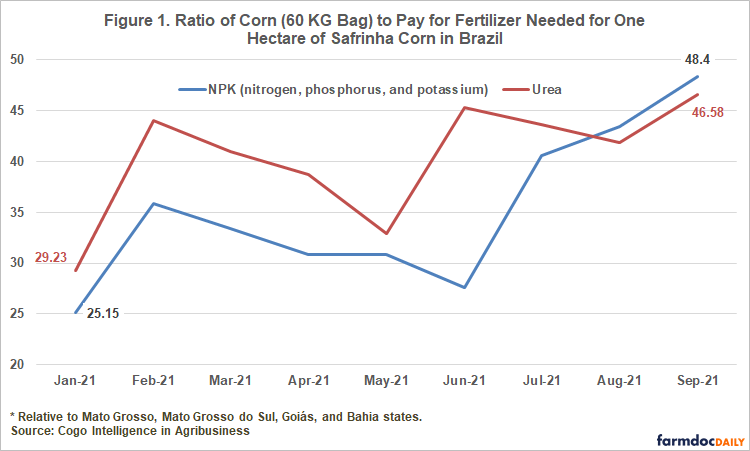 There are many reasons for the rise in fertilizer prices.  They include (1) supply disruptions caused by Hurricane Ida at the end of August 2021, which resulted in the closing of anhydrous ammonia plants in Louisiana; (2) an increasing price of natural gas — which contributes significantly to the cost of producing nitrogen fertilizers; and (3) the general supply disruptions and labor issues associated with COVID-19 that have affected many industries (see farmdoc daily, October 26, 2021).

Brazil produces 2% of the world’s fertilizers and thus is highly dependent on importing these products. Brazil imports 94% of its potassium, 76% of its nitrogen – used heavily on corn fields – and 55% of its phosphorus. According to the National Association for the Diffusion of Fertilizers, around 32 of the 40 million tons of fertilizers delivered to Brazilian farmers in 2020 came from the international market. The United States has increased its nitrogen production by over 40% since 2015, thus reducing nitrogen imports to only 12.5% of 2019 consumption. For phosphate, the U.S. imports less than 10% of the annual consumption. And the U.S. imports over 90% of the domestic potash consumption, the majority from Canada (U.S. Geological Survey, 2020).

The high Brazilian dependence on fertilizer imports causes exchange rates movements to be extremely important, particularly given that all fertilizers sold in Brazil are quoted in the U.S. dollars. For example, from February 2020 to October 2021, the dollar rose 27% relative to the Brazilian real. During the 2020 COVID-19 pandemic, Brazil’s currency depreciated further as its economy slowed. Currently, the dollar to the real exchange rate is around R$5,55. A depreciating in Brazilian currency relative to the American currency means that fertilizer prices are increasing more in Brazil than in the U.S.

Skyrocketing fertilizer prices will significantly increase the cost of second corn production in Brazil. Current 2022 estimates of costs for farms located in the Cerrado (Mato Grosso, Mato Grosso do Sul, Goiás, Bahia states) are R$4,922 per hectare, an increase of 57% compared to last season, according to data from Cogo Intelligence in Agribusiness. The R$4,922 per hectare estimate for safrinha corn is R$1,791 higher than the R$3,131 cost in 2021 (see Figure 2). 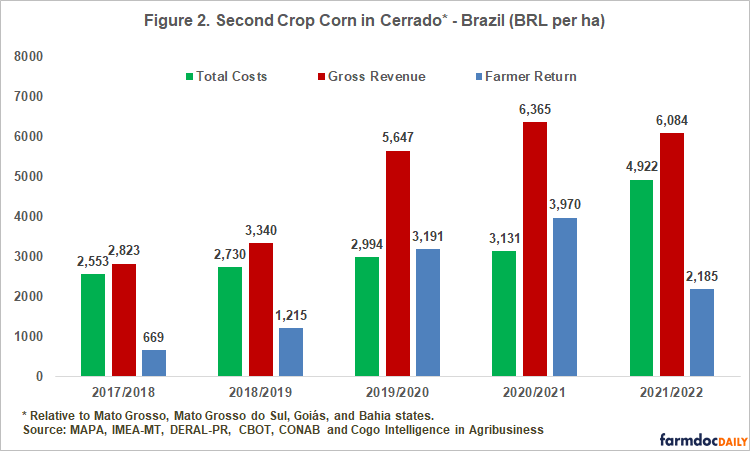 Fertilizer prices are projected to increase 105% for the safrinha corn in 2022, from $140.93 last season to $288.36 per hectare. High fertilizer prices could drop safrinha corn profits by about half next year. Current 2022 estimates of return to farmers are R$2,185 per hectare, a decrease of 45% compared to the last crop (see Figure 2). Fertilizers, pesticides, and seeds account for 45% of the operating costs for a second crop corn producer in Brazil.

On the other hand, gross revenues are expected to remain high for the safrinha crop of 2022, with R$ 6,084 per hectare, just 4% lower than last year (see Figure 2). Due to a drought and frost reduced 2021 safrinha corn crop, Brazil’s corn prices are near record levels.  Moreover, most amortization, depreciation, and opportunity costs are calculated as deductions in the production of the soybean crop (first crop) and not the safrinha corn crop, which is an advantage for Brazilian farmers.

Less Fertilizers in the Fields

About 70% of farmers’ fertilizer needs for planting the safrinha corn next year have been negotiated as of the end of October, according to Agrinvest Commodities, another Brazilian private consultancy. In Mato Grosso, Brazil’s largest corn-producing state, the percentage is 90%.

Brazilian fertilizer imports exceeded 24 million tons in the first nine months of 2021, according to the Secretariat of Foreign Trade, part of the Ministry of Economy in Brazil. That was 13.23% higher than the same period last year. Brazilian imports of potassium chloride in the period were 8.24 million tons, a growth of 9.22%. Urea imports from January to September totaled more than 5.37 million tons, 10% higher than during the same period last year.

Despite the increase in fertilizer imports, with planting starting in January 2022, there is a risk of farmers not receiving the product on time.  Even so, this should not affect the projected planting area for the safrinha in 2022. Planting is expected to total a record of 39.20 million acres, an increase of 5.8% in relation to the last harvest. If fertilizer is not available, Brazilian farmers will likely reduce, even forgo, fertilizer. Failure to apply fertilizer at the right time for corn planting can reduce the volume and quality of the country’s grain harvest. However, lower yields can be offset by the lower cost, balancing the producer’s profit.

Skyrocketing fertilizer prices will significantly increase the cost of second crop corn in Brazil, which will be planted starting in January 2022, after the soybean harvest. Safrinha corn profits could be about half 2020 levels.  Even so, this should not affect the projected area for the safrinha in 2022, with 39.26 million acres, an increase of 5.9% in relation to the last harvest. If fertilizer availability becomes an issue, Brazilian farmers will likely forgo fertilizer, despite the expected drop in yields. The lower yields can be offset by the lower cost, balancing the producer’s profit.

National Association for the Diffusion of Fertilizers, 2020, Sector Research. http://anda.org.br/wp-content/uploads/2021/10/Principais_Indicadores_2021.pdf