This is a presentation summary from the 2021 virtual Illinois Farm Economics Summit (IFES). A video of the webinar and PowerPoint Slides (PDF) are available here.

Net farm income in the U.S. reached nearly $95 billion in 2020 and is projected at nearly $117 billion for 2021 after averaging just under $76 billion from 2015 to 2019. The share of farm income coming from government payments in recent years has increased to levels not experienced since the extended period of low commodity prices in the late 1990s and early 2000s (see Figure 1). 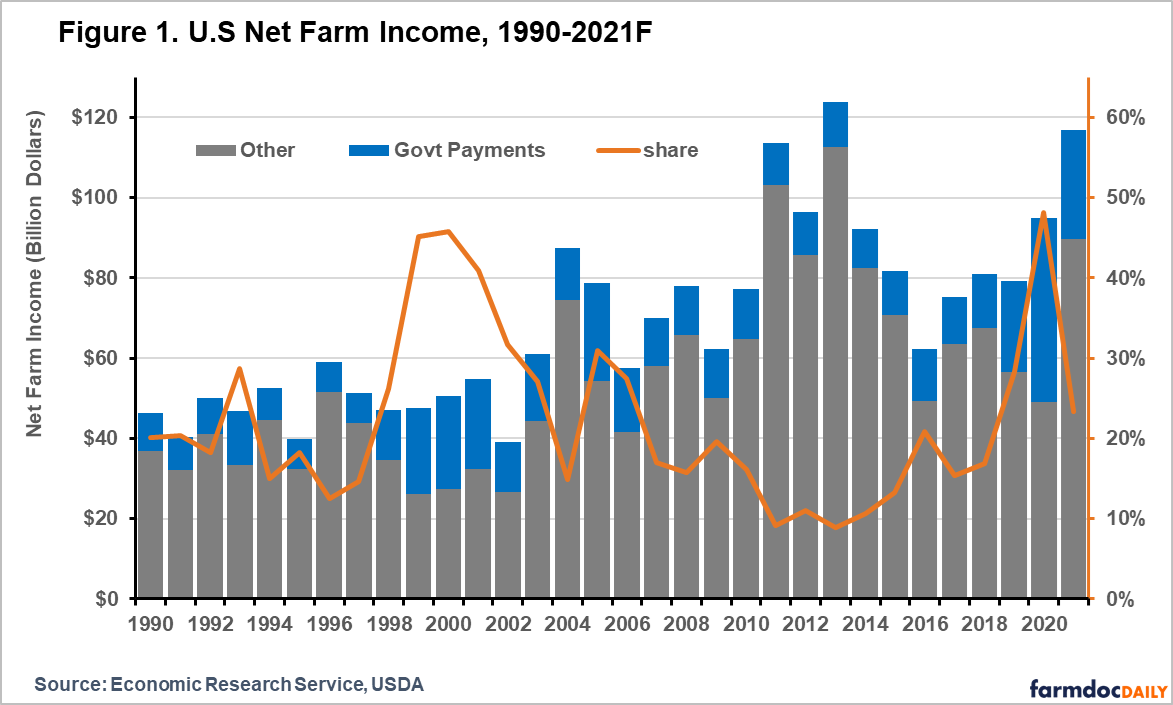 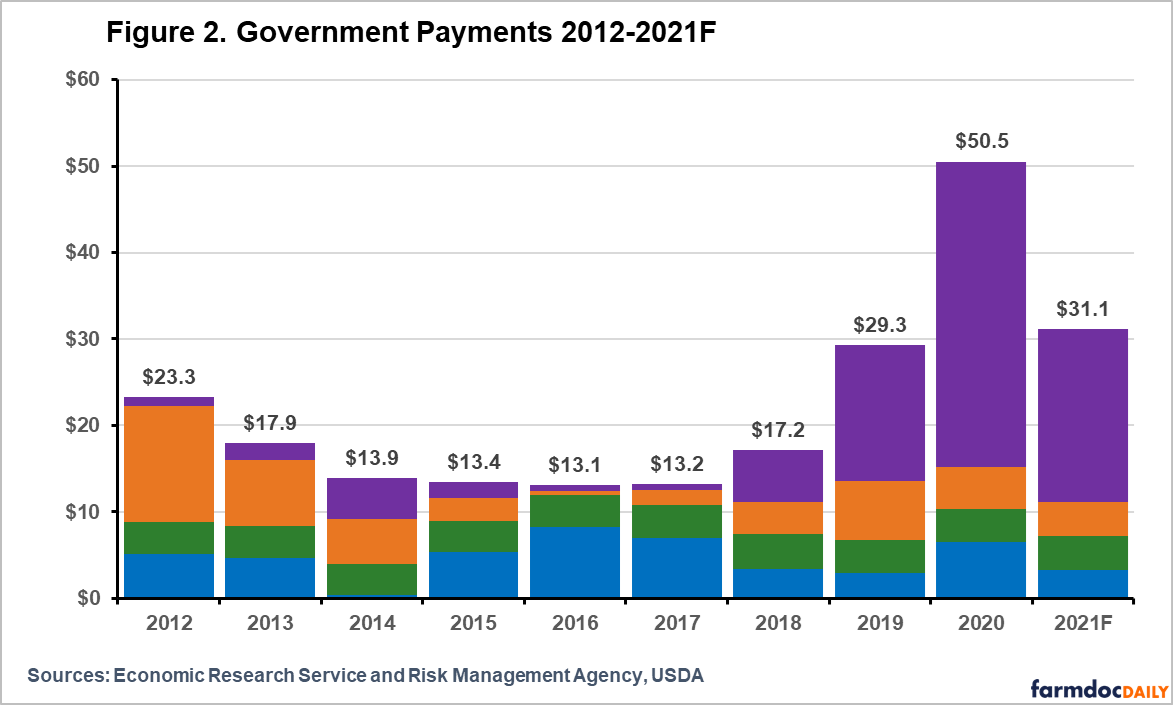 Thanks to favorable corn and soybean prices, current budget projections for 2022 imply positive returns for Midwestern grain farmers (December 7, 2021). However, historically high input costs result in high break-even prices for 2022 and significant downside price risk facing farmers (December 21, 2021). Will conditions that justify additional ad hoc support for U.S. farmers surface again in 2022, or will the existing farm safety net of commodity and crop insurance programs be sufficient? This remains and important and open question heading into 2022 and the 2023 Farm Bill debate process, as policy debates are taking place with broader and larger budgetary implications.

Of the wide range of policy initiatives that could impact agriculture proposed in 2021, some have been adopted into law while others have been tabled for the time or included in legislation that has not progressed.

Another major legislative agenda, the Build Back Better Act, would expand the social safety net and climate change policy. After trimming significantly to a $1.75 trillion package, the bill passed the House but has an uncertain future in the Senate. Some elements of the package would benefit agriculture, but taxation is also part of the deal. The bill proposes $27 billion for “climate smart agriculture” which would be the biggest investment in conservation since the Dust Bowl. A portion of that $27 billion would be used for new programs, including $5 billion for Soil Conservation Assistance, a program that would pay for establishment of cover crops for soil health. Producers would be eligible for $25 per acre and landowners who allow cover crops would be eligible for $5 per acre, but payable on up to $1,000 acres. In addition to new conservation initiatives, about $22 billion of the $27 billion would expand the reach of four existing conservation programs: Conservation Stewardship Program, Environmental Quality Incentives Program, Agricultural Conservation Easement Program, and Regional Conservation Partnership Program. As shown in Figure 3, the additional funding beyond expected outlays for these program from 2022 through 2026 is significant. The taxation portion of the bill could result in higher taxes for some farmers (see farmdoc webinar, October 21, 2021). 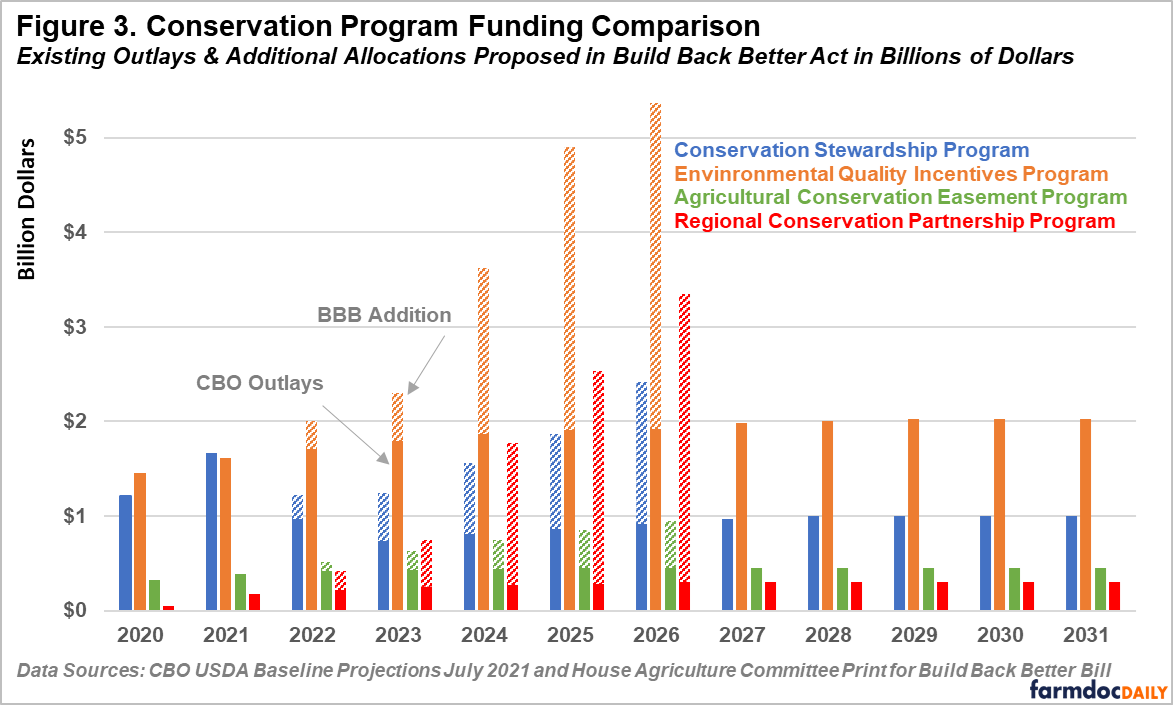 Whether some form of the Build Back Better Act will eventually pass is left to be seen. As attention of the agriculture community begins to turn towards the next farm bill debate, what happens with conservation related provisions in this pending piece of legislation may impact that discussion. Other factors that could impact the 2023 Farm Bill, legislation which is usually a bipartisan effort, include the large ad hoc payments provided to farmers over the past 4 years and the high level of polarization in U.S. politics.