Lack of labor is often mentioned when discussing US supply chain problems.  To attract employees, firms may need to raise wages, which can then lead to inflation.  Inflation has implications for US Federal debt and interest rates discussed in the December 20 and 23, 2021 farmdoc daily articles.  The US labor market is examined since 1948, the first year that the labor force participation rate is available from the Bureau of Labor Statistics.  The labor force participation rate since 1948 tracks the working life of Baby Boomers.  In particular, it has declined as Baby Boomers retire.  A simple analysis finds lower labor force participation is strongly statistically associated with higher real hourly earnings in manufacturing.  An important question emerges, “Will wages have to increase to attract younger generations into the work force, which will make wage inflation a defining, on-going attribute of the US economy in coming years?”  The data in this article are from the Federal Reserve Bank of St. Louis.

The US population is expected to grow slowly (Vespa, Medina, and Armstrong, 2020), making labor force participation more important to the future size of the US labor force.  Since 1948, US labor force participation rate (see Data Note 1) tracts reasonably well the working life of Baby Boomers.  Baby Boomers are usually defined as those born between 1946 and 1964 (Wikipedia, 2021).  The labor participation rate did not consistently exceed 60% until 1969 (see Figure 1) when the oldest Baby Boomers were 23.  Participation peaked at 67% in 1994-2002, then began to decline.  The decline accelerated in 2008, which coincided not only with a US real estate crisis but also with the oldest Baby Boomers turning 62, the earliest age to collect Social Security.  These associations remain if a 5-year moving average is used to focus on longer-term changes.  The associations prompt this question: “Are Baby Boomers more willing to work than Americans who preceded or followed them?” 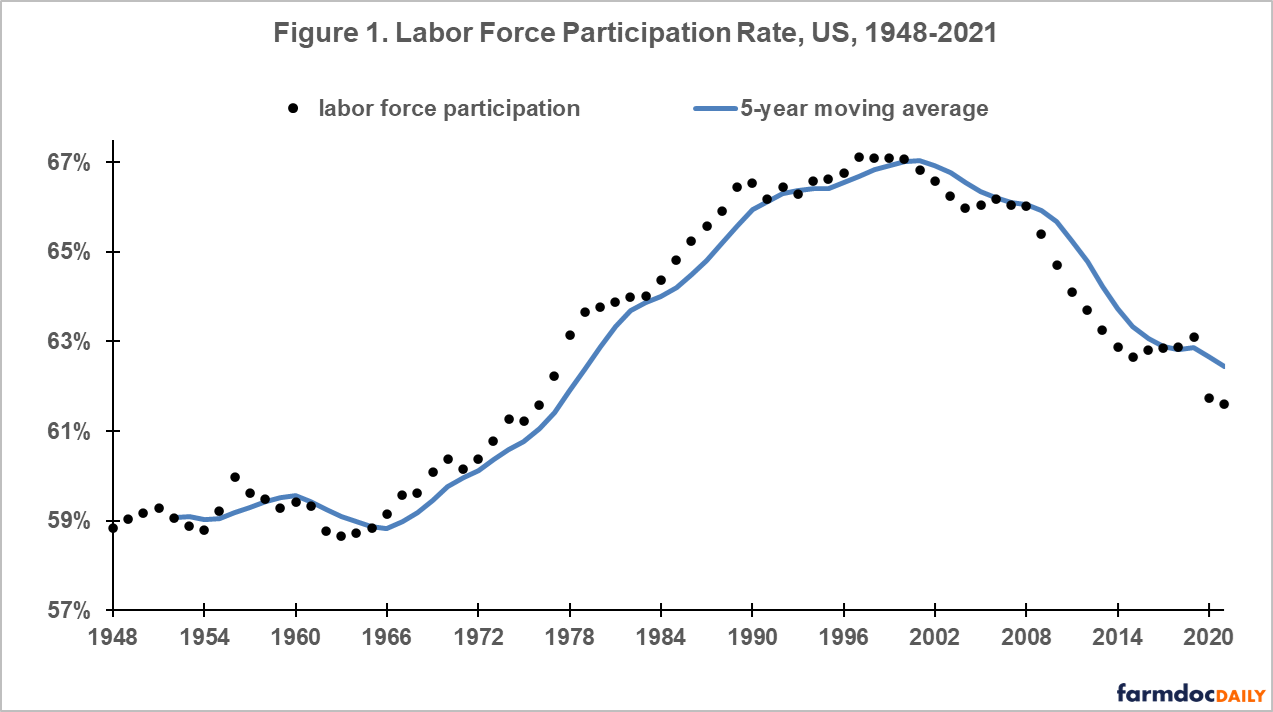 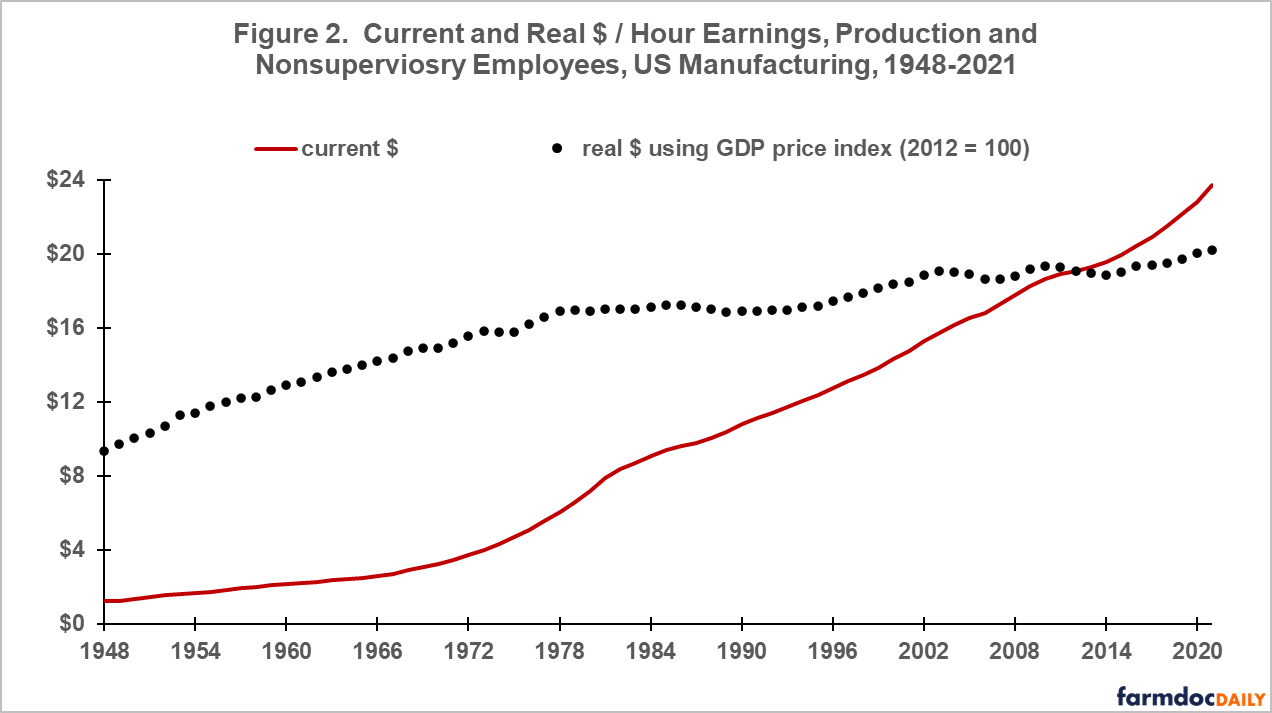 Figure 3 contains the annual year-to-year change in real hourly manufacturing earnings.  Growth was highest in the 1950s.  The first year that real hourly earnings declined was 1974.  Declines have occurred in 13, or about 30%, of years since.  The last year with a decline was 2014. 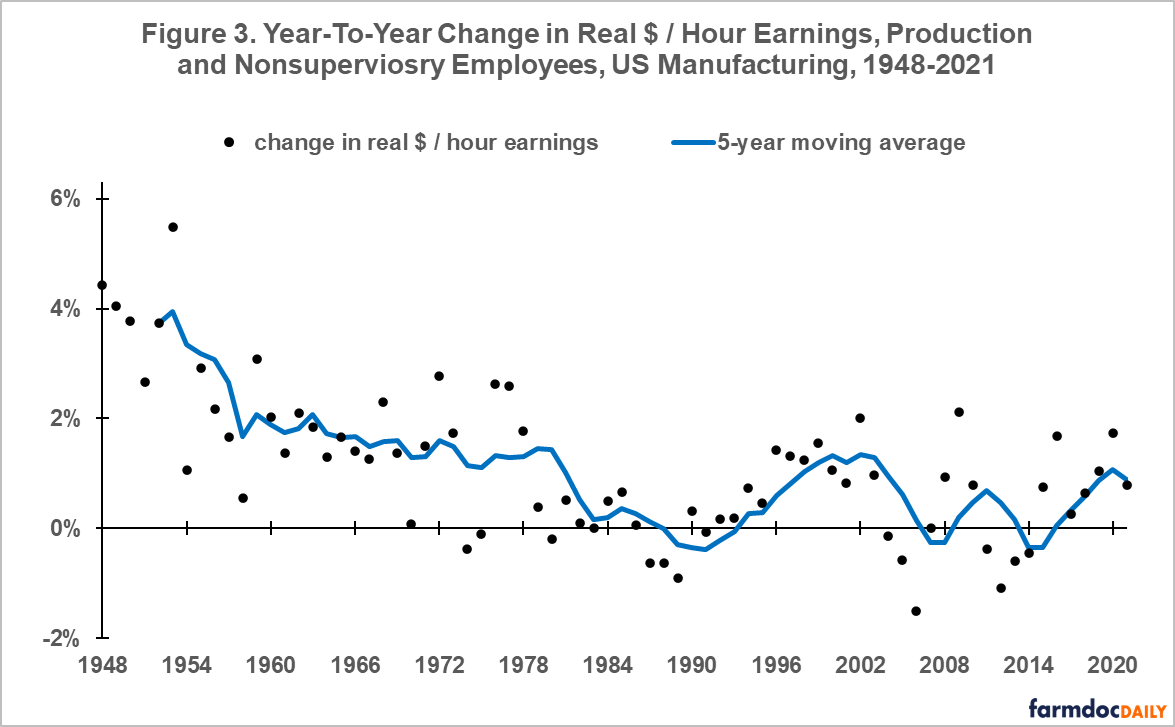 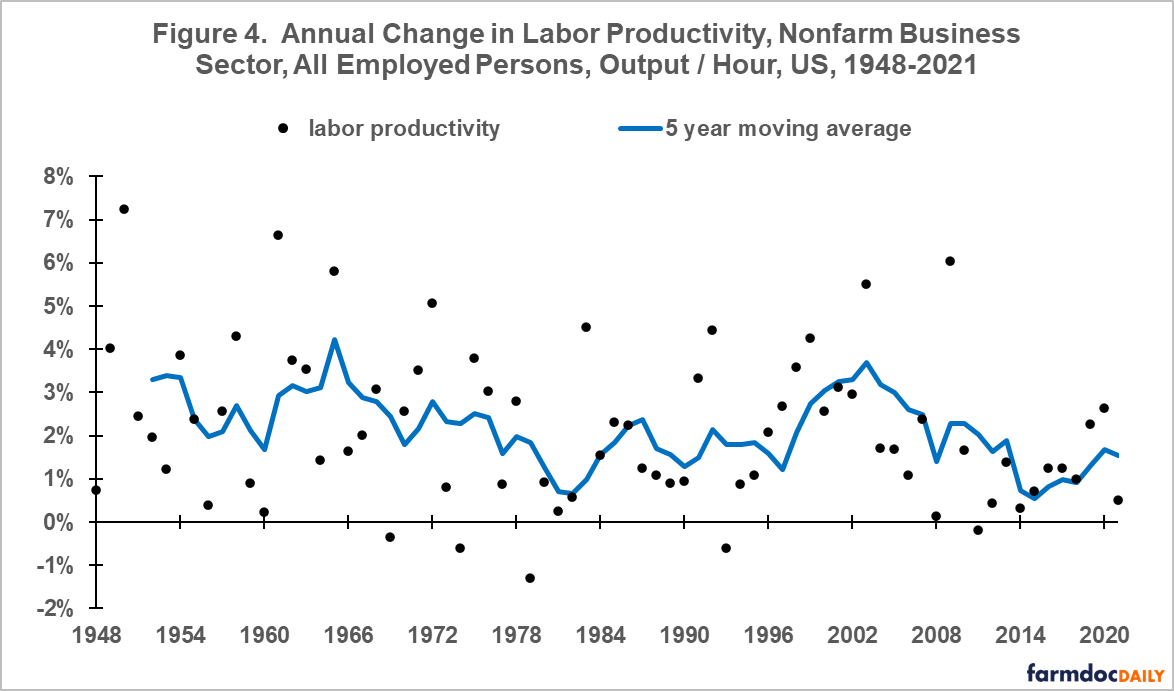 Some, perhaps a notable part, of the 21st Century decline in US labor force participation may be due to retiring Baby Boomers having a greater propensity to work than succeeding generations.  If so, employers will need to raise wages to attract more workers.

The preceding points imply a key question, “Is labor wage inflation an emerging US issue?”

Many factors that impact inflation are transitory in nature, such as reductions in crop output due to weather and higher energy prices due to a weather-related surge in demand or reduction in supply.

Moreover, over the last two years, the inflation adjusted 10-year US Treasury Bond interest rate has been negative (December 22, 2021 farmdoc daily).  The combination of inflation and negative real interest rates discourages investment in interest rate instruments such as bank CDs since earned interest will not cover inflation price increases.  It is reasonable to assume that some, maybe a lot, of money in this safe investment will move to riskier investments, such as stocks and real estate.

Once inflation takes hold, it is difficult to cure.  For example, when the US finally decided to cure its inflation problem in the late 1970s, it took a sustained period of high real interest rates to cure it.  High Federal outlays for interest on US debt materially constrained US policy and spending, and real estate investments, such as farmland, and stocks struggled with low returns and declining values.

Another potential solution to inflation is new technology that improves labor productivity, such as robots..  Faster growth in output increases supply, thus dampening general price inflation.  However, the history of US labor productivity as presented in Figure 2 prompts caution regarding this option.

Another solution is increased immigration to increase US labor supply, but political discord prompts caution regarding the feasibility of this option at this time.