Safrinha corn is Brazil’s 2nd corn crop, planted right after the soybean harvest, typically in January and February, mainly in the Midwest and Center-South of Brazil. Initially smaller than the 1st crop, it was named the safrinha, “little harvest” in Portuguese. However, it is now the largest crop, accounting for 70% of Brazilian corn. With 2nd corn, Brazil competes with the US as one of the world’s largest suppliers in global markets. This article continues the discussion of safrinha corn in the April 12, 2021 and November 8, 2021 farmdoc daily articles. Yields are examined. Safrinha yields have increased faster than Brazilian 1st crop, US, and Argentine yields. Safrinha yields are notably more variable, suggesting safrinha is a key marginal pricing factor for world corn.

Safrinha corn in Brazil has grown significantly since 1992/93, when production exceeded 2 million metric tons for the first time.  Safrinha share of Brazil’s total corn crop has increased almost nine fold, jumping from 8% to 70% (see Figure 1). Safrinha share of world corn production increased eleven fold, from 0.45% to 5%. Brazil’s share of world corn trade increased from 7.5% percent in 2010/11 to 22% percent in 2020/21. In the US Department of Agriculture’s (USDA) Agricultural Projections to 2030, Brazil is expected to be the world’s 2nd largest corn exporter over the next 10 years – behind the US and ahead of Argentina and Ukraine (see farmdoc daily, April 12, 2021). The current crops being raised in Brazil and Argentina are their 2021/22 crops as defined by USDA. 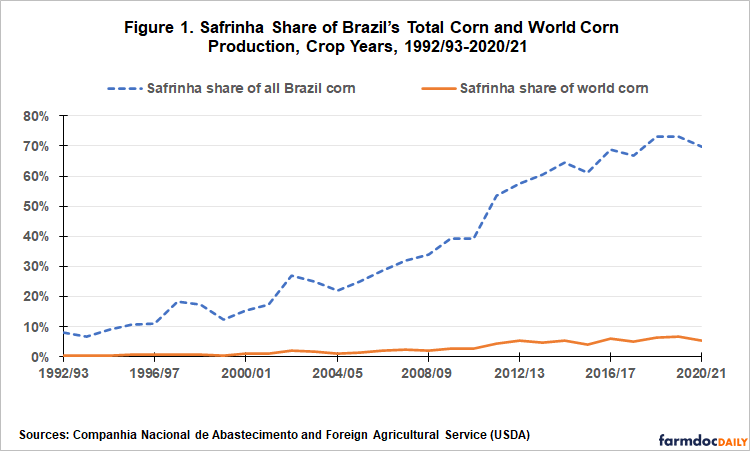 Safrinha expansion has been spurred by several factors.  They include (1) land availability, (2) favorable climate with a long growing season that enables multiple harvests per year, (3) technological advances in soil management and hybrid corn varieties, (4) rising global demand, (5) higher international prices, and (6) targeted government support, such as a farm credit system and infrastructure investments.

Yields in Brazil, US and Argentina

Brazilian corn yield is separated into 1st and 2nd (safrinha) crops starting with the 1992/93 crop year in our analysis. Corn yields averaged 41 and 29 bushels per acre, respectively, for the 1992/93 – 1996/97 crops (see Figure 2). Yields for the last 5 harvested crops (2016/17 – 2020/21) averaged 92 and 81 bushels per acre, respectively. The increase largely reflects investments in agricultural technologies and new agricultural frontiers, such as in the Midwest and Matopiba, a region formed by the Brazilian state of Tocantins and parts of the states of Maranhão, Piauí, and Bahia. 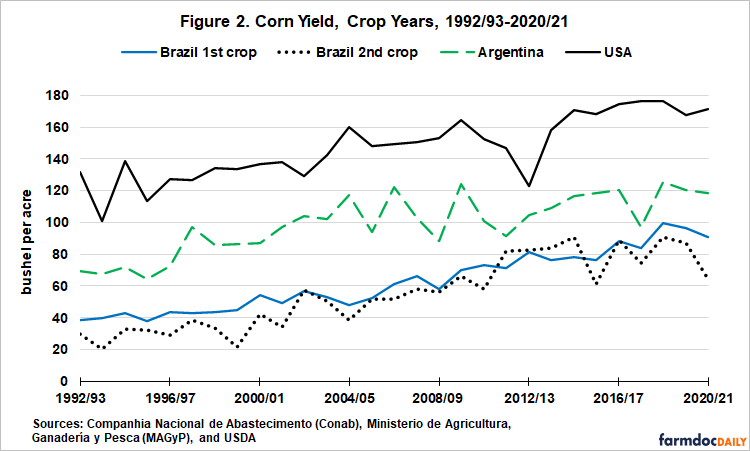 Linear trend yield increased 2.2 and 2.4 bushels per acre for Brazil 1st crop and safrinha corn, respectively (see Figure 3). These trends are 5% and 17% higher, respectively, than the 2.1 bushel per acre increase in US trend yield. Argentina corn yields lagged behind. 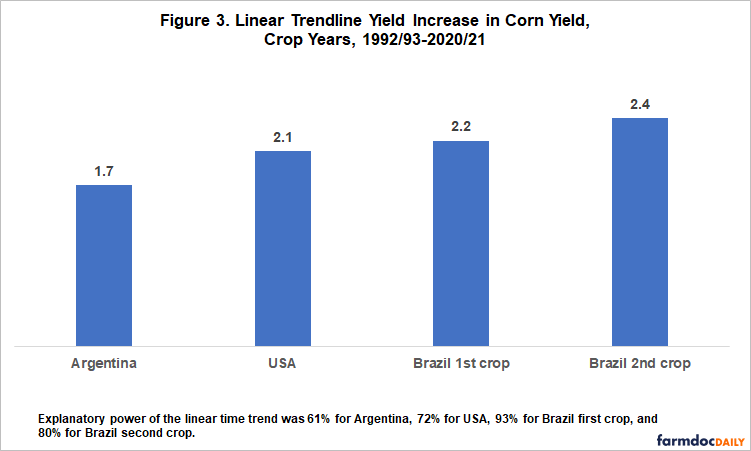 Variation in yield for a year is measured as the percent deviation of actual corn yield for a year from the year’s linear trendline corn yield.  To illustrate this calculation, US corn yield in 2012 was 123 bushels/acre while linear trend yield was 159 bushels/acre.  Percent deviation equaled -23% [(123-159)/159].  Standard deviation of the yearly deviations from trendline yield was two times higher for safrinha (19%) vs. US corn (8%) and Brazil 1st crop corn (9%) (see Figure 4).  Variation of Argentine corn was closer to US and Brazil 1st crop corn than to safrinha.  Another measure of variability is the range between minimum and maximum values.  This range is 82 percentage points for safrinha (39-(-44)) vs. 36-43 percentage points for the other corn crops. 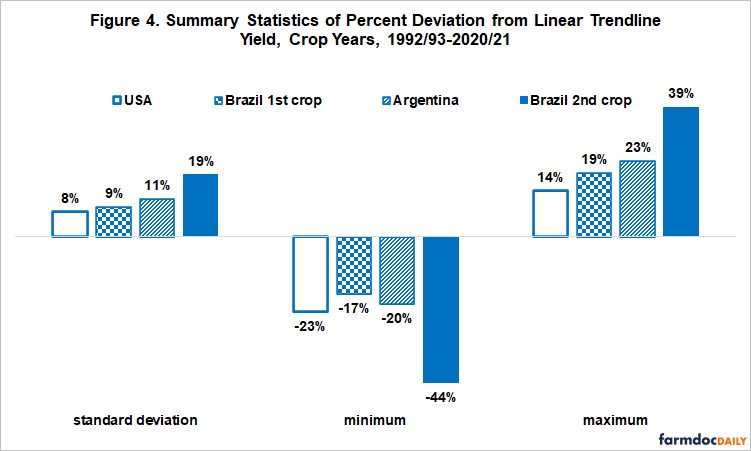 A key factor in safrinha variability is the timing of the onset of the dry season in Brazil. If the onset is early or if safrinha is planted late, the probability of dry weather negatively impacting yields is higher. In 2021, for example, drought and frost caused the 2nd largest decline in safrinha yield relative to trendline yield of -27%.  The largest decline in safrinha yield from trendline yield was -44% in the 1999/2000 crop year. By nature, the 2nd corn crop is risky. On the other hand, safrinha complements the soybean crop in terms of rotation, agronomic management, production costs, net income, and farmer selling strategies.

The implication for American corn farmers is that they need to closely monitor planting progress and growing season weather of safrinha corn when marketing corn in storage as well as corn to be planted.