Brazil, Argentina, and Paraguay, which account for more than 50% of the world’s soybean supply, are expecting smaller harvests this crop season. Major agricultural agencies and consultancies have already slashed their forecasts for the soybean output in 2021/2022 as a result of severe drought since November. As a consequence, the U.S. Department of Agriculture has also reduced its estimate of global soybean production. And soybean futures on the Chicago Mercantile Exchange have reached a nine-year highs levels in February on concerns about the more unfavorable crop weather in South America and the recent Russia’s invasion of Ukraine. This article focuses on the countries for which production declines have been confirmed by state statistical agencies so far.

In a monthly crop report in February, the National Supply Company (Conab) pegged Brazil’s soybean crop at 4,610 million bushels, down from the January projection of 5,162 million bushels. Compared with the last harvest (5,076 million bushels), the current projection would be a reduction of 9.2%. If the forecast is correct, the crop still would be the second largest in history (see Figure 1). The losses in Brazil, the world’s largest producer and exporter, are concentrated mainly in the southern states, such as Rio Grande do Sul (RS), Paraná (PR) and Mato Grosso do Sul (MS) – where the La Nina phenomenon caused drought during the summer. 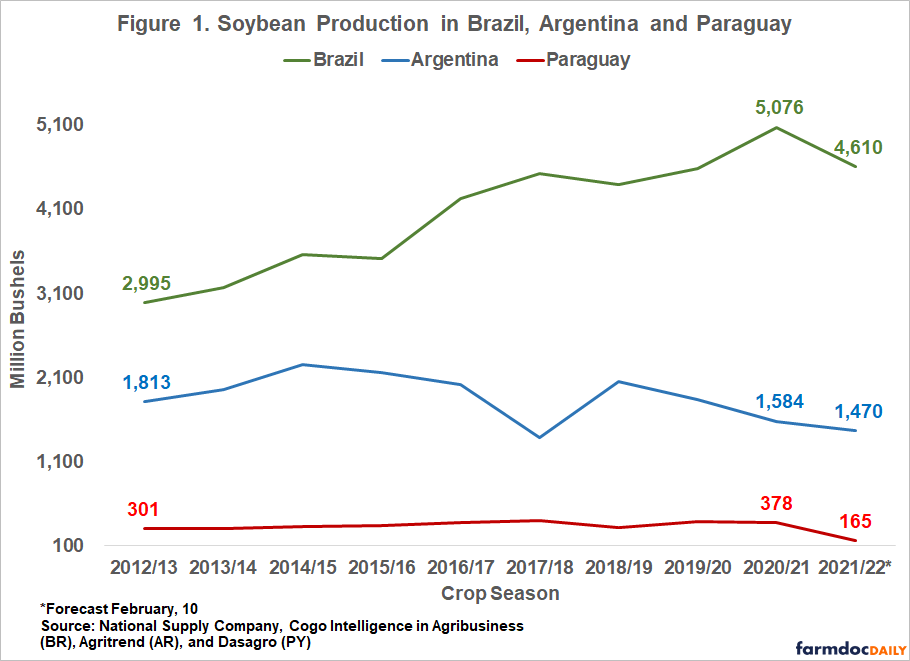 The situation in Argentina, the world’s top soybean oil and meal exporter, is not ideal either, with almost the entire country suffering from a drought since November, again as a result of La Nina. The most recent forecast from Agritrend, a private consulting firm in Argentina, indicates that Argentina will harvest 1,470 million bushels this season. That represents a 7.2% reduction from last year’s crop (see Figure 1). According to Rosario grains exchange (BCR), the situation is still worrisome, with soil conditions ranging from scarcity to drought in the provinces of Santa Fe, Cordoba, and Entre Rios.

In Paraguay, the world’s fourth-largest soybean exporter, the situation is even more dramatic. Paraguay’s soybean harvest could fall by as much as 50%, to some 165 million bushels in what would be the lowest level in the last decade. In the previous cycle, according to data from Dasagro, a private consulting firm in Paraguay, the nation produced 378 million bushels of soybeans, 56% higher than forecast for this year (see Figure 1).

The last time Paraguay produced less than 160 million bushels of soybeans was in the 2011/2012 cycle, also as a result of a prolonged drought. Paraguay exports over half of the soybeans it produces, and its economy depends heavily on shipments abroad of raw materials, according to data from the Paraguayan Chamber of Soybean Exporters.

Frustration and Records within Brazil

La Nina events favor increased rain across northern Brazil and decreased rain in southern Brazil. Such has been the case this year as southern Brazil has gone deep into drought. In the southern states of Rio Grande do Sul (RS), Santa Catarina (SC), and Paraná (PR), precipitation has been very scarce since November 2021. As a consequence, the soybean yields for these three states are projected to be 35% lower than last season, according to the Conab forecast.

In Paraná, with almost 30% of the area harvested by the third week of February, production is expected to reach only 479 million bushels, a decrease of 34.4% in comparison to last year. In Rio Grande do Sul, harvesting will begin in March, production is predicted to be 505 million bushels, 33.9% smaller than last crop season (see Figure 2). Drought severely affected Rio Grande do Sul, hindering timely planting. High temperatures and drought could result in an incomplete planting season. 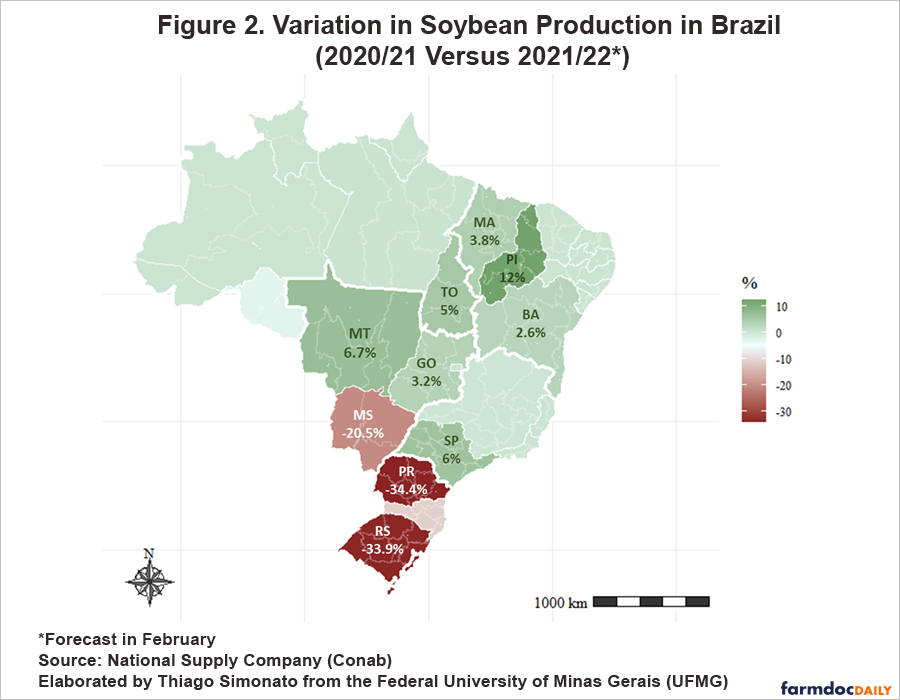 If the troublesome weather brought about by the La Niña phenomenon continues to worsen in February, it is possible that there could be more damage to crops, and soybean production could be lower than the current projection. Paraná and Rio Grande do Sul are historically the second and third largest soybean producers in Brazil, respectively. The soybean crop in Mato Grosso do Sul (MS) is expected to be 20% smaller than last season (see Figure 2).

On the plus side, Mato Grosso (MT), the largest Brazilian soybean producer, is expected to have a record-breaking 2021-2022 harvest. The most recent forecast from Conab projects farmers will produce 1,432 million bushels, an increase of 6.7% in relation to last year. By the third week of February, Mato Grosso had harvested 70% of the area planted. Goiás (GO), in the Brazilian Midwest, also is expected to have a record soybean harvest. The production this season is projected to reach a record of 552 million bushels, 3.2% higher than last season (see Figure 2).

The Matopiba region, an area in the Brazilian North and Northeast formed by the states of the Maranhão (MA), Tocantins (TO), Piauí (PI) and Bahia (BA), is also projected to reach historical production levels this season. The higher production levels are attributed to favorable weather as well as an increase in the planted area and the use of technologies such as seeds adapted specifically for this region. Considered one of the main agricultural frontiers in Brazil, the region has numerous favorable qualities for modern agriculture (see farmdoc Daily, July 12, 2021).

With all indications pointing toward a tightening of global supply in the first half of 2022, in addition to the impacts from the Russian military attack on Ukraine, soybeans futures traded in Chicago in February have been the most expensive since 2012, surpassing $16 per bushel. As a consequence, soybean prices continue to hit new records in the Brazilian market. Prices in the port of Paranaguá (PR) closed on February 24 at BRL 201,35 ($39.35) per 60-kilogram bag (2.2 bushels), according to data from the Center for Advanced Studies in Applied Economics of Luiz de Queiroz College of Agriculture at the University of São Paulo (Cepea/Esalq/USP). This is the highest value in Cepea’s history.

The average monthly cash price in the port of Paranaguá for soybeans increased 17,3% from November 2021 to February 2022 (see Figure 3). Depending on the weather and international market, soybean prices in Brazil could continue to rise. The changing soybean market dynamics in South America may have bullish implications on exports of the upcoming U.S. soybean crop and may lead to higher US soybean production in 2022. In response to climbing soybean prices in South America, U.S. soybean export prices are up 25 percent since December (USDA, 2022). 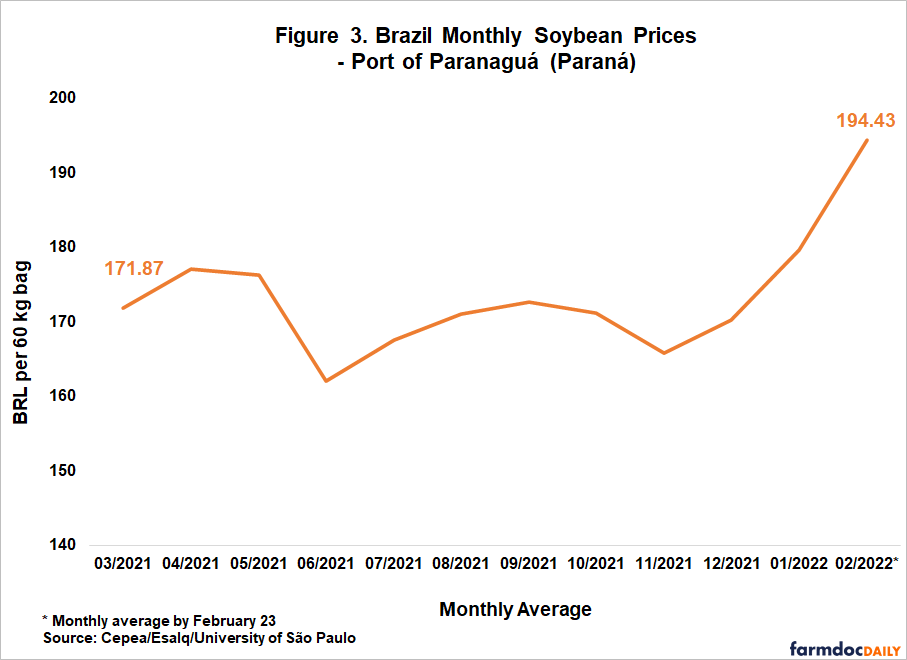