Ukraine and Russia have become an important source for global supplies of major agricultural commodities in the past 25 years (farmdoc daily, October 11, 2012). These countries, often collectively referred to along with various other Eastern European and Central Asian nations as the Black Sea region, play an important role in the production and export of major grains (corn, wheat, and barley) and oilseeds (especially sunflower and sunflower oil) (Glauber and Laborde, 2022).  In addition to the direct toll it will take on the people of the region, the Russian invasion of Ukraine last week introduces many economic concerns including the impact of the conflict on global agricultural markets. 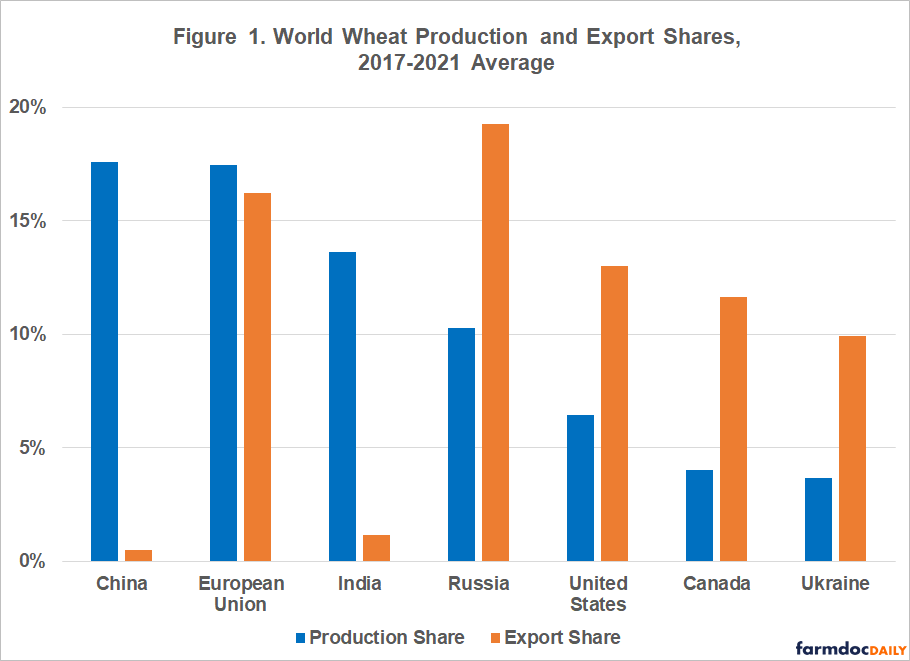 Production and export shares for corn across selected countries are reported in Figure 2. The U.S. remains the dominant global producer (32%) and exporter (33%) for corn. Brazil (18.3%) and Argentina (20%) rank 2nd and 3rd in corn exports.  Ukraine now ranks 4th, contributing over 15% of world corn exports. Russia ranks 6th with a 2.3% share of corn exports. Notably, Ukraine has been the dominant supplier of corn to China.  A shift towards import of more U.S. corn to China began in 2020 following a poor Ukrainian crop (He, Hayes, and Zhang 2021). 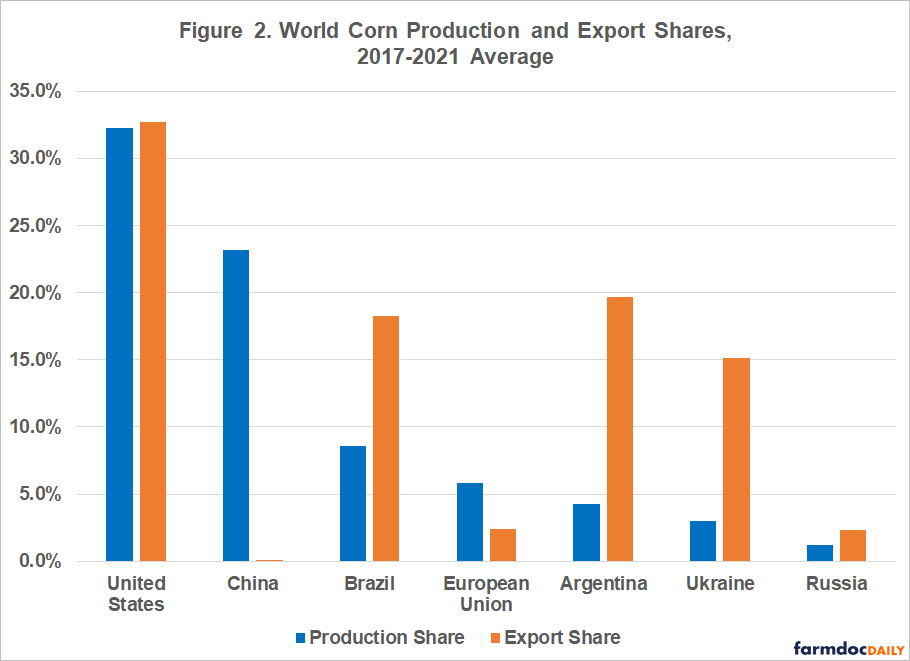 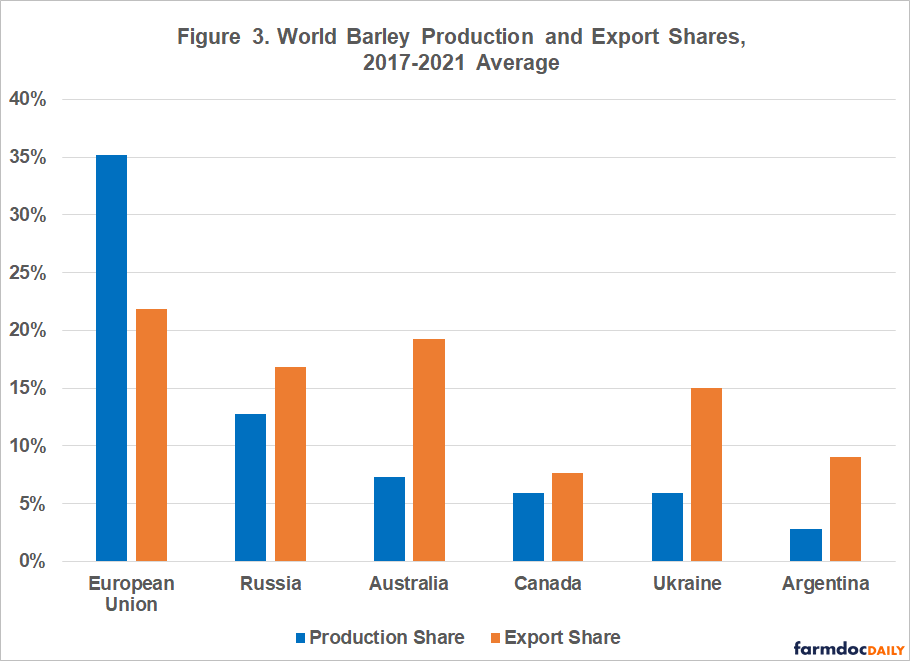 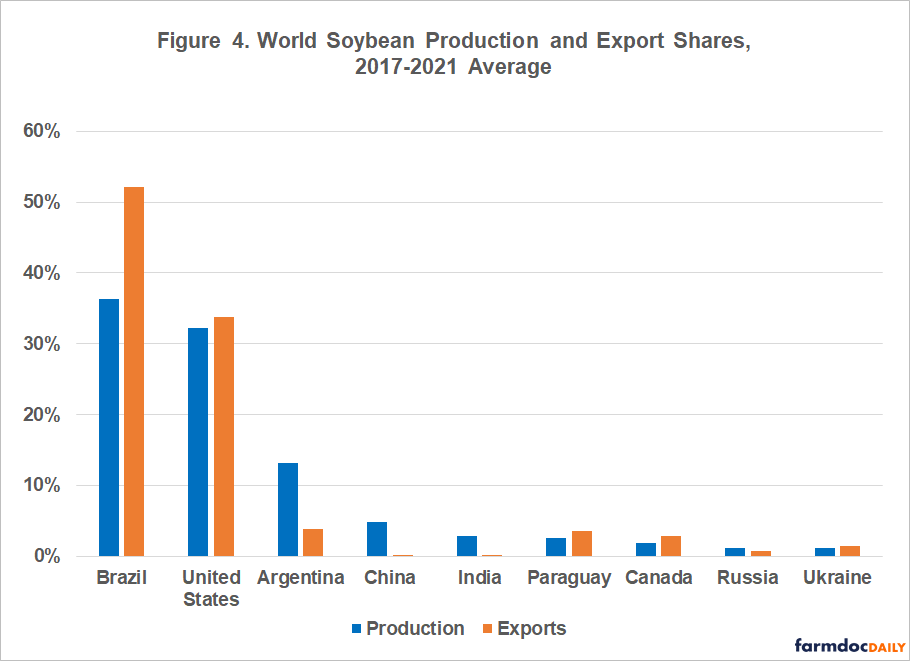 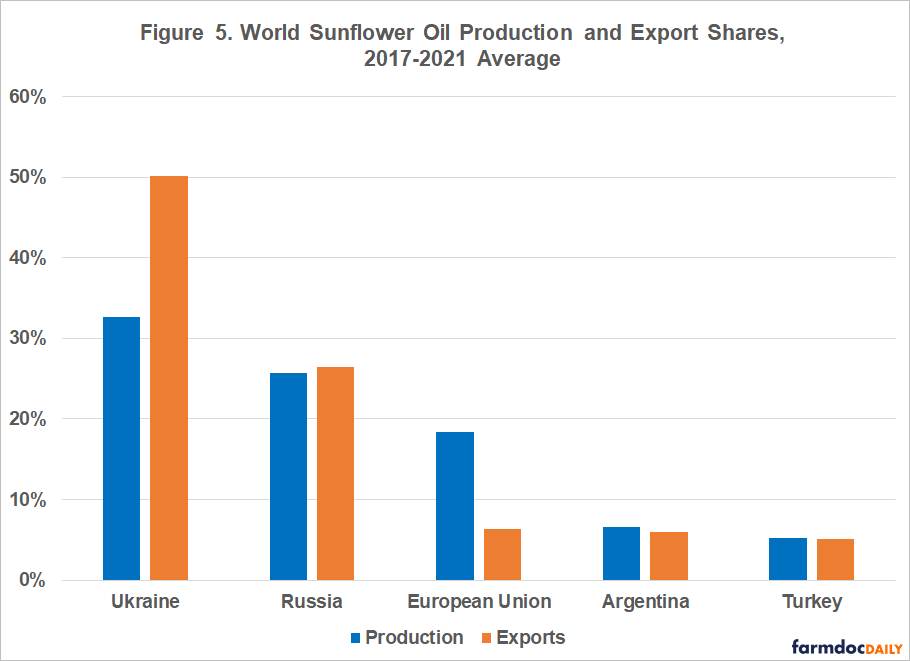 The broad economic implications of last week’s Russian invasion of Ukraine, and the resulting sanctions imposed on Russia by the international community, could include disruption of trade flows, greater inflationary pressures, and an increase in volatility across a wide range of global markets.

The invasion is likely to impact the spring planting season for Ukrainian farmers, the magnitude of which will depend on the length and severity of the conflict. Diversion in trade flows will lead to price pressures and increased volatility for the agricultural commodities for which Russia and Ukraine play relatively large roles in terms of global production and trade. This increased volatility was seen in trading activity last week in wheat and corn futures which included limit (maximum) price moves both up and down across multiple days.

The inability for Ukrainian and Russian agricultural commodities to reach global markets may result in higher prices than would have otherwise occurred to the benefit of grain and oilseed producers in other major producing and exporting countries such as the U.S. However, the market disruptions stemming from the conflict and Russian sanctions will also result in major economic costs.  Higher agricultural commodity prices will hurt net agricultural importers, particularly in developing parts of the world.

Other costs of the conflict may also hit U.S. agriculture:  Increased volatility introduces both opportunities and challenges from a risk management standpoint. Higher prices for agricultural inputs would offset the benefit of higher corn, soybean, and wheat prices for U.S. farmers to some as yet unknown degree. Russia and its ally Belarus are major world suppliers of energy and fertilizer products which could be severely impacted by sanctions (Glauber and Laborde, 2022). With energy and fertilizer prices and volatility already at high levels, the invasion of Ukraine creates additional uncertainty regarding input costs and availability that still might impact the 2022 crop year and also extend to future crop years.

Zulauf, C., A. Lines and N. Pryshliak. "Spanning the Globe – Corn, Soybean, and Wheat Production and Exports since 2000: Focus on the Black Sea Area and the U.S.." farmdoc daily (7):102, Department of Agricultural and Consumer Economics, University of Illinois at Urbana-Champaign, June 2, 2017.