On March 28, 2022, President Biden released the annual budget for fiscal year (FY) 2023 for the federal government (FY2023 Budget of the U.S. Government; The White House, March 28, 2022).  Included within it is the U.S. Department of Agriculture’s budget for FY2023 (FY2023 USDA Budget).  The budget release is part of the annual process for Congressional budgeting and appropriations for the federal government.  This article provides a snapshot of the budget reported and proposed by the President, reviewed with an eye to the expected farm bill reauthorization process in calendar year 2023.

Known generally as the power of the purse, Article I, Section 8 of the U.S. Constitution delegates to Congress the power to lay and collect taxes, to borrow money, and coin money; Section 9 requires money be spent “in Consequence of Appropriations made by Law” (U.S. Constitution).  Pursuant to federal statute, the annual budget process in Congress begins with the submission by the President of a budget, followed by the Congressional Budget Office’s report to the Budget Committees of Congress (2 U.S.C. §631). Once Congress agrees to a budget, the Appropriations Committees commence action on the various appropriations bills for the fiscal year, which begins October 1st.  The modern budget process traces to the Congressional Budget and Impoundment Control Act of 1974, with significant provisions added by the Balanced Budget and Emergency Deficit Control Act of 1985 and the Budget Enforcement Act of 1990 (farmdoc daily, November 29, 2018; Saturno, CRS Report, February 26, 2020).

The combined figures illustrate the topline budget forecasts in the FY2023 Budget.  Figure 1a. illustrates the total revenue, outlay and deficit forecasts through FY2032.  Figure 1b compares the total debt held by the public with the gross domestic product forecasts for the coming ten fiscal years through FY2032.  Figure 1c illustrates spending (outlays) by categories, including the discretionary accounts for defense and non-defense. The mandatory accounts are Social Security, Medicare, Medicaid.  Other mandatory accounts would include the farm bill mandatory programs (e.g., Title I, Commodities; Title II, Conservation; Nutrition; and Crop Insurance).  Finally, Figure 1d provides the fiscal year forecasts for revenues to the federal government such as taxes and the receipts for Social Security and other insurance funds.  Outlays (Figure 1c) exceeding receipts (Figure 1d) produce annual deficits (Figure 1a), and annual deficits add to the total debt held by the public (Figure 1b).

Much of the President’s budget is a report of the expected expenditures, such as the mandatory accounts but also salaries and expenses of agencies.  The President’s budget also includes proposals by the Administration to Congress for enacting changes to existing law with budgetary effects.  Figure 2 illustrates the main proposals in the FY2023 budget, which the Administration estimates would save over $1 trillion in the ten-year window.  For example, the President proposes new investments or spending on K-12 and college education, investments in health and affordable housing, as well as for crime prevention.  Most notably, the President is proposing that Congress pass a new minimum tax on billionaires and raise the corporate tax rate to 28 percent, while also preventing multinational corporations from using tax havens to avoid taxes.  Over ten years, the Administration estimates spending an additional $825 million while increasing revenues by $1.87 trillion to reach the net deficit reduction estimate. 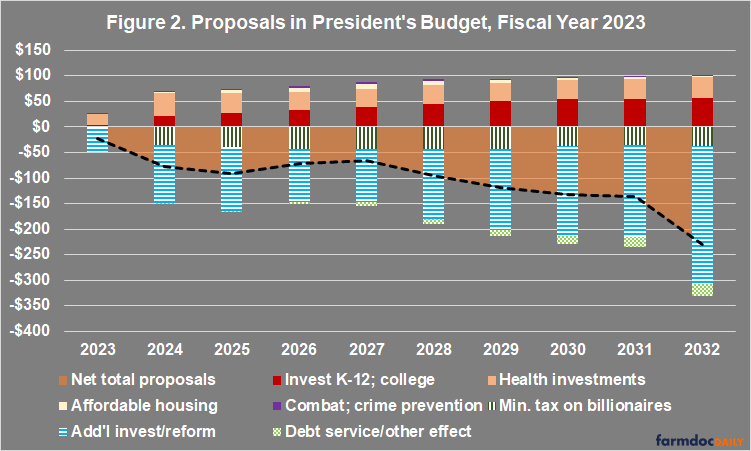 The combined figures below illustrate the mandatory and discretionary spending reported by USDA (Figure 3a): the enacted amounts in FY2021, the estimated amounts in FY2022 and the budget for FY2023.  The major farm bill program accounts, Title I, Conservation, Crop Insurance and the Supplemental Nutrition Assistance Program are in Figure 3b and make up the bulk of the black bars in Figure 3a.  After a significant increase in SNAP during the pandemic, the budget projects a decrease of nearly $30 billion in FY2023.  Figure 3c breaks down the Title I programs, Agriculture Risk Coverage/Price Loss Coverage (ARC/PLC), the dairy margin coverage program, permanent disaster programs, loan deficiency payments (LDP), noninsured crop disaster assistance program (NAP) and other programs, as well as the export programs funded by the Commodity Credit Corporation.  Most notable is the expected drop in ARC/PLC spending, falling to $641 million in FY2023.  By comparison, USDA projects an increase in crop insurance spending to over $13 billion in FY2023.  Finally, Figure 3d illustrates the conservation programs with most of the expected spending in the Conservation Reserve Program (CRP) and the Environmental Quality Incentives Program (EQIP).

Digging a little deeper, USDA also reports payments by commodity and those amounts for 2021 actual, 2022 estimate and the 2023 budget are illustrated in Figure 4.  For farm bill reauthorization purposes, the decrease in expected payments for FY2023 is notable.  This would reflect payments for the 2021 crop year given the need for a twelve-month marketing year average price and the timing shift for payments after October 1.  If prices are higher in 2022 and forecast to remain well above reference prices, this would be expected to shrink the 2023 farm bill baseline.  Note that USDA reports payments on both upland cotton and seed cotton without further details or explanation.  Upland cotton was removed from the programs by the 2014 Farm Bill due to the Brazil WTO lawsuit and replaced by seed cotton in the 2018 Farm Bill.  Payments for both raises questions.

USDA’s budget also includes six strategic goals that cover climate change and forest fires, equitable, resilient and prosperous agricultural systems, competitive marketplace for all producers, the availability of safe and nutritious foods to all Americans, expanded opportunities in rural and tribal communities, and USDA workforce goals. Longtime budget observers will note one thing missing in the FY2023 USDA budget.  Past budgets have proposed reforms to crop insurance that included reducing average premium subsidy to 48 percent (from 62 percent) and applying Adjusted Gross Income means-testing of $500,00 or less.  Those proposals, having been repeatedly dismissed as nonstarters by Congress, were not included in this year’s proposals” (see, FY2021 USDA Budget; FY2020 USDA Budget).

The annual ritual of the President’s federal budget is an important event in the federal government’s operations; communicating the President’s priorities, it sets in motion the budget resolution and appropriations process in Congress.  Less than a direct impact on the upcoming 2023 farm bill reauthorization, the budget and the Congressional process provide information for that effort.  What Congress chooses to spend in the coming fiscal year will have impacts across the nation, from farmers to rural communities, to land grant universities.  This article has provided a snapshot and review of the FY2023 budget.

The White House, Office of the Management and Budget. “Budget of the U.S. Government: Fiscal Year 2023." https://www.whitehouse.gov/wp-content/uploads/2022/03/budget_fy2023.pdf