The Agricultural Improvement Act of 2018 is scheduled to expire in the 2023 calendar, crop, and fiscal years, initiating the reauthorization process on the legislative calendar.  At this early stage vast uncertainties exist about the directions of, and prospects for, reauthorization.  Adding to the uncertainty, Russian dictator Vladimir Putin launched an unprovoked war on the nation of Ukraine.  Among the many consequences thus far include spiking commodities prices (especially oil, natural gas) and food inflation (farmdoc daily, February 28, 2022, March 7, 2022, and March 8, 2022).  Crop price spikes have long had outsized impact on farm bill development; the Conservation Reserve Program (CRP), because it removes acres of cropland from production for ten years or more, receives significant attention in such times.  This article reviews CRP, adding further perspective to recent discussions (farmdoc daily, February 17, 2022; December 8, 2021; see also, Graven, Yu & Goodrich, October 29, 2021).

Under the CRP, landowners may enroll environmentally sensitive cropland acres for ten or fifteen years.  Enrolled lands include highly erodible land for which erosion cannot be controlled or other marginal lands for which continued farming would “contribute to the degradation of soil, water, or air quality” or “pose an on-site or off-site environmental threat to soil, water, or air quality” (16 U.S.C. §3831 et seq.).  The land must have had a cropping history (planted four out of the six years prior, or is land previously enrolled in CRP).  As currently authorized, total CRP acreage is capped at 27 million acres and includes three subprogram categories:  (1) general (whole field) enrollment; (2) continuous (partial field) enrollment, including farmable wetlands; and (3) grasslands (see also, farmdoc daily, February 17, 2022; December 8, 2021).  Out of the total acreage cap, the subprograms include goals for at least 8.6 million acres enrolled under the continuous subprograms (includes 750,000 in farmable wetlands) and 2 million acres in grasslands.

Figure 2 adds perspective to the maps in Figure 1.  It is a breakdown of the share of total CRP acres enrolled for each of the subcategories for the top 15 states, ranked by total CRP enrolled acres.  So, for example, in January 2020, Texas had the most total acres enrolled in CRP (2.8 million), and over 88 percent were in the general program.  Kansas (1.9 million) and Colorado (1.8 million) were second and third with similarly high acreage in general enrollment (82 percent and 88 percent, respectively).  By comparison, Iowa’s 1.7 million acres were mostly enrolled in the continuous program (67 percent) and only 27.5 percent under general enrollment, but 5.5 percent in farmable wetlands.  North and South Dakota have the highest share of CRP enrollment in farmable wetlands (10.6 percent and 8.7 percent, respectively), while Nebraska (32 percent) and South Dakota (12 percent) had the highest share in grasslands among these states.  Similar to Iowa, Illinois (841,000) has most CRP acreage in continuous (70 percent) and just under 30 percent in the general subprogram, while Minnesota (1 million) had 64 percent in continuous, 32 percent in general, and almost 4 percent in farmable wetlands. 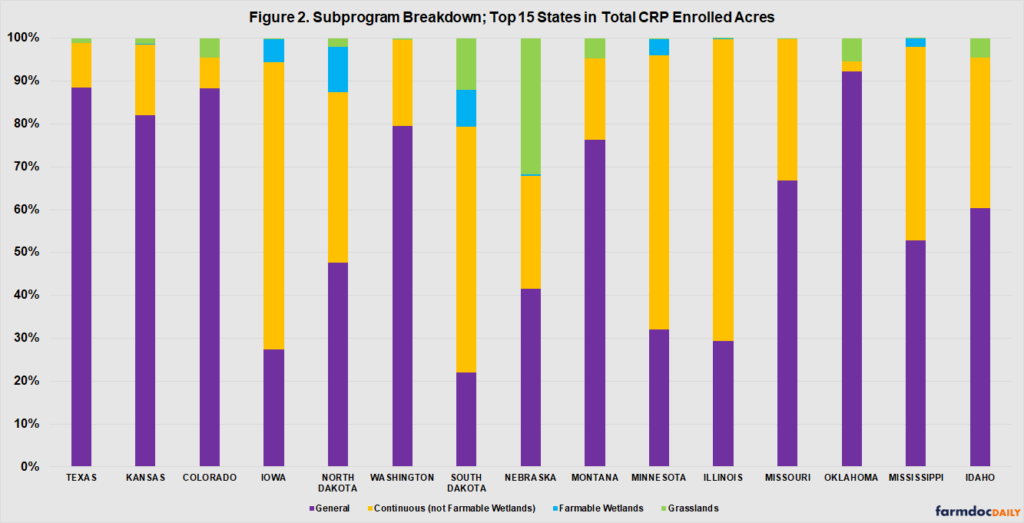 Congress created the CRP in the landmark Food Security Act of 1985 (P.L. 99-198) during the depths of the 1980s farm economic crisis as part of the vast federal response to it.  For perspective on CRP’s origins, Figure 3 illustrates the total cropland used for producing crops in the United States from 1910 to 2020 as reported by USDA’s Economic Research Service (ERS, Major Land Uses, Summary Table 3) with 1985 highlighted (see also, farmdoc daily, February 27, 2020; June 26, 2020).  In brief historical context, a massive spike in acres used for crops can been seen throughout the 1970s and into the 1980s farm crisis.  Notably, the spike begins in the wake of the 1972 grain deal with the Soviet Union, which cleared out U.S. surplus stocks of wheat and other grains.  Prices spiked and Congress changed farm policy to incentivize production through target prices and deficiency payments.  Secretary of Agriculture Earl Butz infamously declared they had reached the promised land and encouraged farmers to plant fencerow to fencerow and to get big or get out.  Farmers expanded acres, causing massive soil erosion and other natural resource problems; coupled with stagflation, inflated land values and then a spike in interest rates, heavily indebted farmers collapsed into crisis in the late 1970s and early 1980s (see e.g., farmdoc daily, May 30, 2019; July 11, 2019).  CRP was added to the farm bill to retire acres that arguably should not have been in production, but also to reduce total acres adding to crop surpluses in a depressed farm economy. 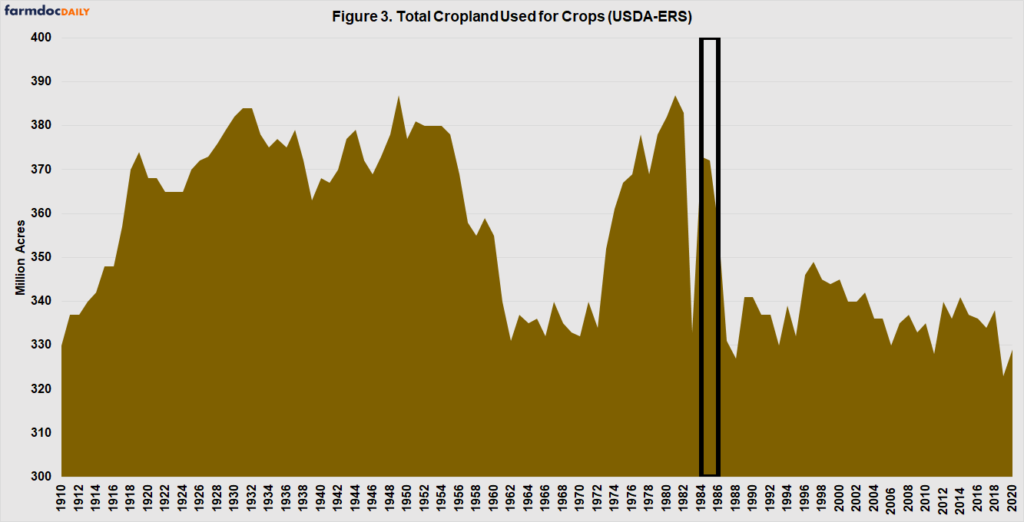 Figure 4 provides total acres enrolled in CRP at the national level since 1986 and the acreage cap from each farm bill.  Also included are the acres set to contractually expire in the coming fiscal years.  Congress initially established a goal of enrolling up to 45 million acres in the program.  In no year has CRP met its farm bill acreage cap and acreage enrolled has fallen off significantly in recent years.  Note that the 2014 Farm Bill reduced acres each fiscal year (to 24 million) and the 2018 Farm Bill increased them each fiscal year to 27 million, which is carried through the coming years similar to baseline assumptions.  Each fiscal year presents the potential for acres to come out of the program and return to production as contracts expire and acres can be reenrolled. 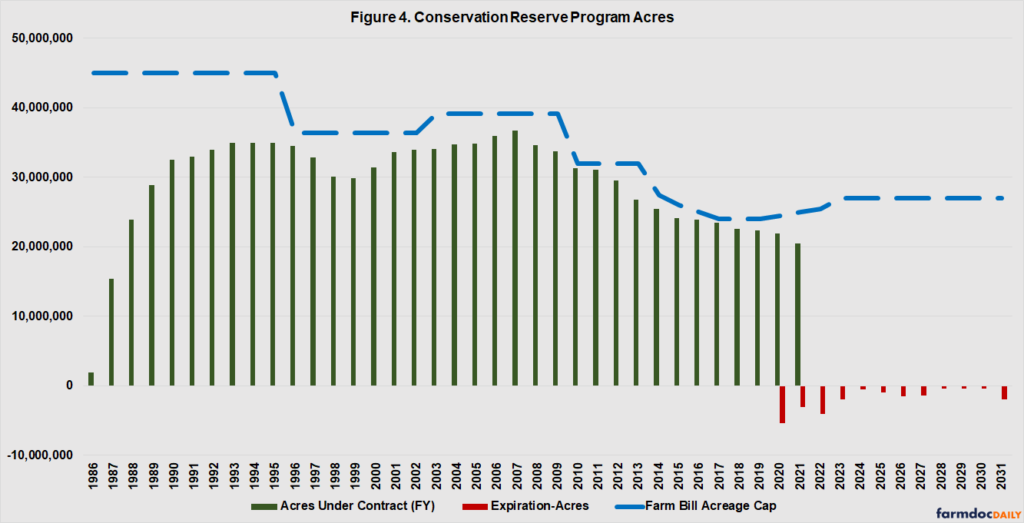 Tension and conflict reside at the core of CRP’s acreage retirement policy between production of staple commodities for market and the conservation of natural resources, especially the reduction of soil erosion.  Acres in the program are removed from crop production for ten to fifteen years, a potentially long time given the vagaries of weather and markets, but CRP is reauthorized every five years along with the rest of the farm bill.  Figure 6 illustrates total acres planted to corn, soybeans and wheat reported by NASS (USDA NASS, Quickstats) and the total acres enrolled in CRP (FSA) for the previous ten years (2012 to 2021).  Compared to 2012, total acres enrolled in CRP have fallen by more than 9 million acres in 2021.  Acres planted to wheat in 2021 were 8.6 million less than in 2012, while acres planted to corn were nearly 4 million less.  Among these, only soybean acreage has increased, with nearly 10 million more acres planted to soybeans in 2021 compared to 2012. 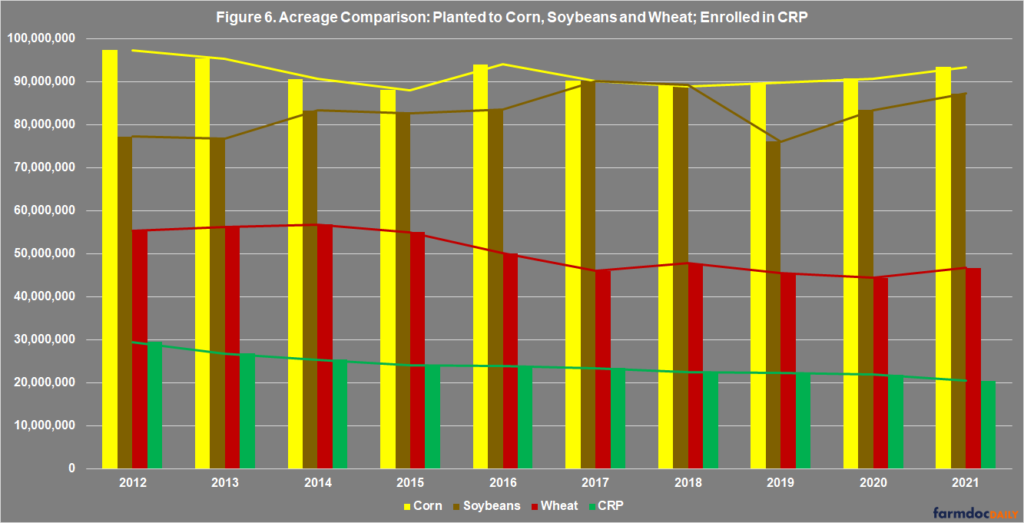 Striking a balance is no simple matter and Congress has provided the Secretary discretion to make temporary contract modifications or waiver of a term or condition of a CRP contract to permit acres to “be devoted to the production of an agricultural commodity during a crop year” from the beginning (P.L. 99-198, Section 1235(c)(2); 16 U.S.C. §3835(c)(2)).  USDA regulations provide for modification to produce an agricultural commodity only “under exceptional circumstances” during the crop year (7 C.F.R. §1410.32).  Both statute and regulation leave questions about the conditions upon which any modification could be granted and what the Secretary might require.  In addition, the statute also provides for emergency haying, grazing or other emergency forage use “in response to a localized or regional drought, flooding, wildfire, or other emergency, on all practices, outside the primary nesting season” subject to certain conditions, as well as other grazing with a 25 percent reduction in the rental rate (16 U.S.C. §3833(b)), which is mirrored in the regulation (7 C.F.R. §1410.63).

Potentially more notable than the modification and emergency provisions has been the legislative developments since 1985.  Congress has consistently authorized more flexibility and a greater variety of contracts or subprograms.  Continuous enrollment was added for acres devoted to hardwood trees by the 1990 Farm Bill (Food, Agriculture, Conservation, and Trade Act of 1990, P.L. 101-624). The 2002 Farm Bill (Farm Security and Rural Investment Act of 2002, P.L. 107-171) substantially rewrote the CRP, including a pilot program for wetland and buffer acreage that would become the farmable wetland program.  The 2008 Farm Bill (P.L. 110-246) revised the pilot program for wetlands and added a transition program for beginning and socially disadvantaged farmers.  The 2014 Farm Bill, (Agricultural Act of 2014, P.L. 113-79) added the grasslands enrollment option and the 2018 Farm Bill (Agricultural Improvement Act of 2018, P.L. 115-334) set the 2 million acre-goal for it.  The 2018 bill also added new pilot programs for a 30-year contract (CLEAR 30) and the Soil health and income protection pilot program (SHIPP) that provide for shorter-term contracts (3, 4, or 5 years) (16 U.S.C. §3831c).  These revisions to CRP can be seen in the acreage distribution in the maps in Figure 1, as the program is arguably adapted to regional differences.

As the unprovoked Russian aggression shakes loose some horrid ghosts of humankind’s past, the death and destruction unfolding in Ukraine creates complications on top of complexities.  Among them are the very real and acutely problematic concerns about high prices for commodities, crops and food; the specters of inflation, food shortages and famine further cloud the picture.  Complexities and complicated circumstances can compound and confound, but they rarely succumb to simple solutions.  History counsels caution; short-term decisions can have long-term consequences and may not accomplish much for the costs.  CRP provides an example.  Over 20 million acres of former cropland is locked away from production in long-term contracts, but that does not necessarily offer a simple solution for shortages, particularly in the short term.  The program is neither monolithic nor static.  Acres enrolled in CRP have declined significantly since the modern peak of 36.8 million total acres in 2007, but more than half of the acres enrolled have shifted into the continuous subprograms, especially across the major crop producing areas.  Much more needs to be known about all enrolled acres, their potential for meaningful production, and the potential consequences.  Evaluation should also incorporate the current and near-term state of commodity production and usage, including that American farmers planted 8.6 million fewer acres of wheat in 2021 than they did a decade earlier.  As the agricultural committees in Congress begin the farm bill reauthorization process, CRP will be among the major topics reviewed, debated and for which changes will be considered.  USDA and other researchers could assist the search for effective responses by producing a full inventory and evaluation of the acres under contract.  Some subset of the enrolled acres could contribute to relieving shortages, but beneath others may lie the Dust Bowl’s mountains of blowing topsoil or the 1970s erosion problems.

Coppess, J. and K. Swanson. "The Other Side of the Seventies." farmdoc daily (9):127, Department of Agricultural and Consumer Economics, University of Illinois at Urbana-Champaign, July 11, 2019.

Graven, A., J. Yu, and B. Goodrich. “The Conservation Reserve Program is Competing with Pasture Insurance for Farmer Participation.” Ambrook, October 29, 2021. https://ambrook.com/research/the-conservation-reserve-program-is-competing-with-pasture-insurance-for-farmer-participation