These figures were obtained from farm business records kept by farmers enrolled in the Illinois Farm Business Farm Management Association.  The samples included only farms with more than 500 acres of productive and nearly level soils in each area of the state; these are farms without livestock.  Farms located in the 22 counties north and northwest of the Illinois River are included in the sample for northern Illinois.  Farms from 36 counties below a line from about Mattoon to Alton are in the sample for southern Illinois.  The remaining 44 counties make up the sample for central Illinois.  The sample farms averaged 1,625 tillable acres in northern Illinois, 1,550 acres in the central section with high soil ratings, 1,511 acres in the central section with lower soil ratings, and 1,885 acres in southern Illinois.

Cost of Production For Corn Compared to 2020

Costs per acre for corn were higher in all the different geographic regions in Illinois compared to 2020.  Across the state, total costs per acre to produce corn increased from 7 to 10 percent.  Land and pesticide costs increased the most statewide.

Cost of Production For Soybeans Compared to 2020

Total costs to produce corn for all combined areas of the state were $937 per acre. This is $69 per acre higher than 2020.  Variable costs increased $34 per acre or 8 percent, other nonland costs increased $14 per acre, and land costs increased $21 per acre.  In 2021, cash costs accounted for 47 percent of the total cost of production for corn, other nonland costs were 27 percent, and land costs were 26 percent.  The average corn yield for all combined areas of the state was 213 bushels per acre resulting in a total cost of production of $4.40 per bushel.  The average corn yield in 2021 was the highest in the last 3 years and 10 bushels to the acre more than 2020.  Total costs per acre were the highest since 2013 while total costs per bushel were the second highest in the last five years.

Total cost per acre to produce soybeans increased, from $635 per acre in 2020 to $693 per acre in 2021.  Variable cash costs accounted for 33 percent of the total cost of production for soybeans, other nonland costs 32 percent and land costs 35 percent. The average soybean yield for all combined areas of the state was 68 bushels per acre resulting in a total cost of production of $10.19 per bushel. The cost per bushel to raise soybeans the last five years averaged $10.23 per bushel.

Forecasts for Illinois production costs in 2022 look to increase using Gary Schnitkey’s 2022 Crop Budgets and the USDA’s Cost-of-Production Forecasts as a guide.  For corn, 2022 variable costs are projected to increase 39 percent, mainly due to soil fertility costs.  However, this increase could be more depending on when fertilizer was purchased.  For 2022, soybeans have a larger projected percentage increase of variable costs of 46 percent.  This increase is also primarily due to soil fertility costs.  These increases coupled with monitoring overhead and land costs have the possibility to be offset with currently higher projected grain prices for 2022.

The author would like to acknowledge that data used in this study comes from Illinois Farm Business Farm Management (FBFM) Associations across the state.  Without their cooperation, information as comprehensive and accurate as this would not be available for educational purposes.  FBFM, which consists of 5,500 plus farmers and 60 plus professional field staff, is a not-for-profit organization available to all farm operators in Illinois.  FBFM field staff provide on-farm counsel with recordkeeping, farm financial management, business entity planning and income tax management.  For more information, please contact the State FBFM Office located at the University of Illinois Department of Agricultural and Consumer Economics at 217-333-8346 or visit the FBFM website at www.fbfm.org. 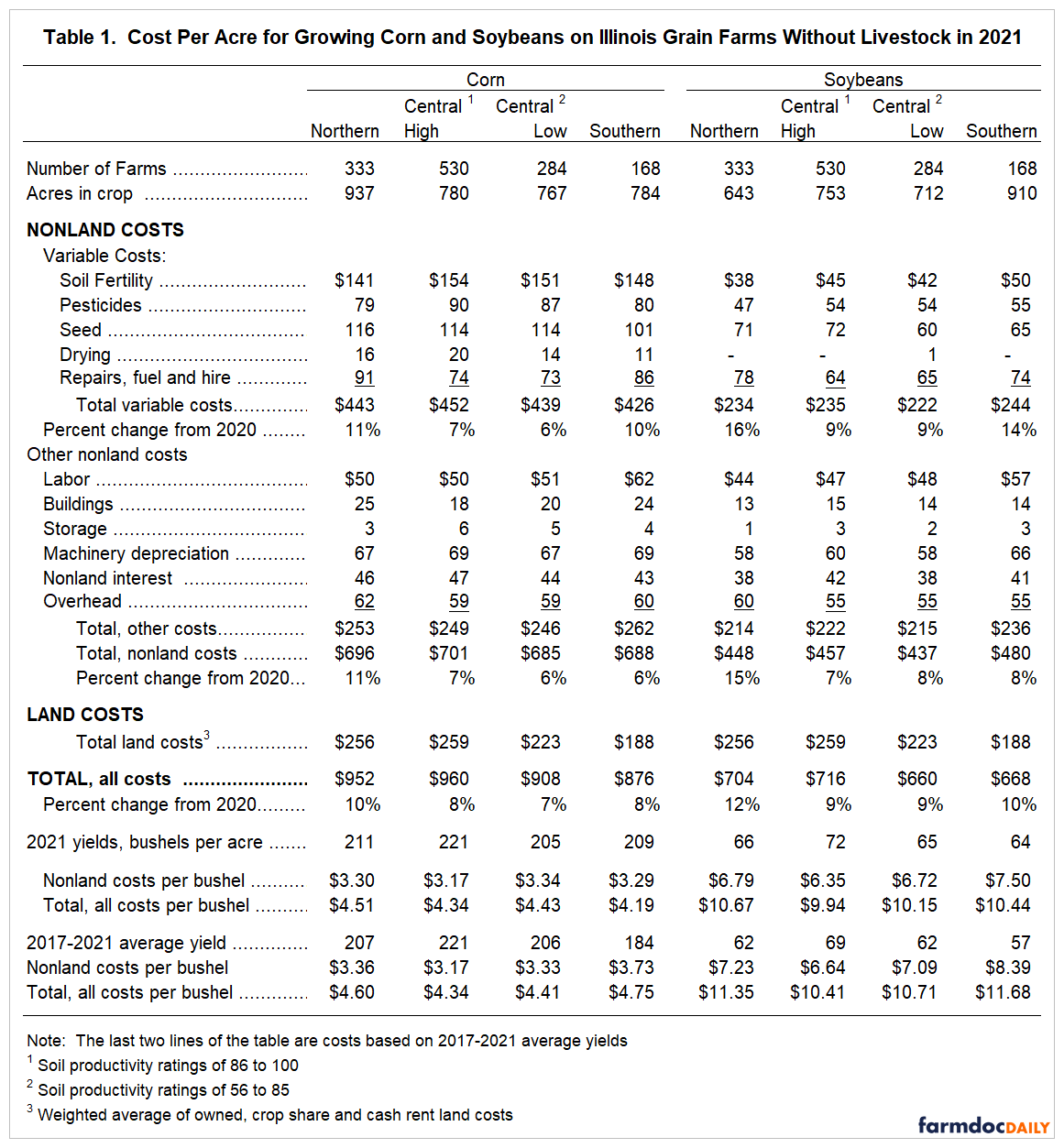