Public discussion of fertilizer prices has become more intense and frequent, likely due in large part to the sharp increase in fertilizer prices since last year.  A common theme is the potential role of monopoly pricing power.  Few firms produce fertilizer.  For example, North American production largely rests with 4 firms (farmdoc daily, April 5, 2022).  The basic concern is that a firm with a large individual market share may be able to raise price to garner above average, also called abnormal or monopoly, profits.  Monopoly pricing power has a long history in US public policy and in economics.  This article summarizes some of the key, big picture findings and thoughts from economics.  The bottom lines are that it is inappropriate to equate monopoly pricing power with number of firms and that actions to address monopoly pricing power may result in higher prices.

Role of Substitutes and Entry Barriers

Availability of substitutes is a critical issue.  In this use, substitutes are not different forms of the same product, such as different car models, but a distinctly different product.  A prime example is the emergence of gasoline powered trucks as competition for the railroads in the early 1900s.  History repeatedly underscores the importance of substitute options.  A second critical issue is market entry.  If entry is easy, an attempt to raise price and create abnormal profit will bring the entry of other producers which in turn will eliminate the abnormal profit.  Sustained abnormal profits requires an entry barrier(s) that prevent new firms from entering the market.

Entry barriers come in many forms.  One classification involves 3 types.

Public discussions of monopoly pricing power often focus on the collusion barrier.  However, entry barriers are broader than collusion.  The other two types of barriers may enhance social welfare or not pose societal welfare concerns.  In fact, society may create them via government action.  Stated alternatively, abnormal profits are not necessarily inconsistent with increases in societal welfare.

Even if monopoly pricing power and abnormal profit exists, it is possible that price could be higher with more competition and no abnormal profit.  This can occur if substantial economies of size exist, resulting in cost of production declining sharply as output of a firm increases.  This situation is illustrated in Figure 1.  The long run technology curve has a steep enough decline that having a single firm results in users paying a lower price than if 2 firms exist (i.e. more competition).  The single firm earns an abnormal profit as it has set price above its cost of production (area bounded by blue and green horizontal lines).  However, users pay a lower price than if the market has 2 firms that earn no abnormal profit (red line where price equals average cost of production).  The reason is substantial economies of size from having production by 1 as opposed to 2 firms.  Dividing the market into more than 2 firms will further increase price as a firm produces a smaller amount and thus attains smaller production economies.  To summarize, it is possible that forcing competition to eliminate abnormal profits can result in users paying higher prices. 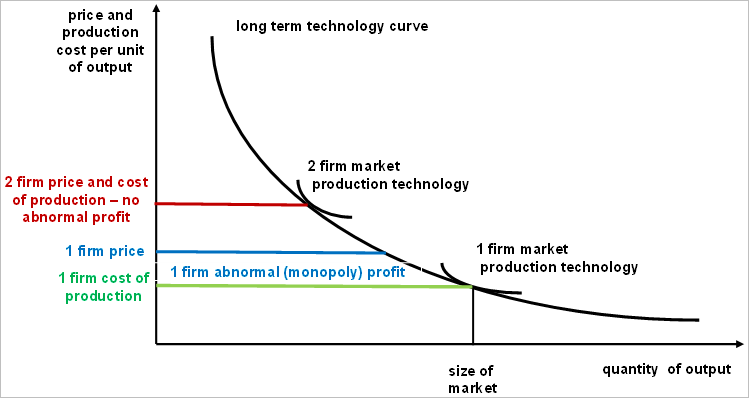 Given the preceding discussion, relevant initial questions in the case of US fertilizer markets likely include (1) “What is the role of substitutes?,” and (2) “Are entry costs for a new fertilizer producer high enough to create an entry barrier?”  Substitutes, such as livestock manure, exist for some commercial synthetic fertilizers, but their supply is currently smaller or have environmental restrictions on their use.  Fertilizer plants appear to have a high startup cost but formal analysis is needed to quantify if startup costs, including the acquisition of specialized knowledge, are in fact an entry barrier.  Analysis would likely also involve comparing rates of return with companies in similar types of markets.  If analyses find that abnormal profits exist, then a closing question needs to be addressed: “What role does economies of size play in the US fertilizer industry and in the public policy response?”  Without knowing the role of economies of size, it is difficult to assess if users are better or worse by eliminating monopoly pricing power and abnormal profits.

An interrelated public policy issue is petitions filed with USDC (US Department of Commerce) and ITC (US International Trade Commission) by CF Industries Holdings, Inc. (Newswire, January 27, 2022).  The petitions requested the agencies to initiate investigations on whether UAN (urea ammonium nitrate solutions) exports from Russia and Trinidad and Tobago were creating unfair trade conditions.  USDC issued affirmative preliminary determinations in November 2021 and January 2022.  As a result, USDC will impose cash deposit requirements on US UAN imports from Russia and Trinidad and Tobago, based on preliminary rates of dumping.  Under US law, both USDC and ITC must make a final affirmative determination.  Countervailing duties could then be imposed for at least 5 years.  Final determination could occur in the summer of 2022.  How this international trade issue interplays with the concern over monopoly pricing power in the US fertilizer industry will bear watching going forward.

The high cost of fertilizer has raised questions of monopoly power in pricing fertilizer.

A small number of firms is not sufficient to conclude that monopoly pricing exists.

Economies of size can be so large that users can be better off even if monopoly pricing power and abnormal profits exist.

A potential viable long term public policy response to concerns about monopoly pricing power in the fertilizer industry would be to fund research to improve the efficiency with which fertilizer is used and to find substitutes for synthetic fertilizers.

In closing, the major point of this article is that it is far easier to raise issues of monopoly pricing power than to document its existence and its negative impact on users and consumers.