Nitrogen fertilizer prices are high and likely will go higher due to repercussions from the Ukraine-Russia conflict. Herein, we trace the evolution of nitrogen price increases, making the case that increases up until recent months resulted from responses to the Covid pandemic, general price inflation, and policies in Europe to move away from fossil fuels. The Ukraine-Russia conflict will intensify nitrogen price and supply concerns. North American fertilizer companies have faced scrutiny as a culprit in rising nitrogen fertilizer prices. While it is true that North American fertilizer companies likely will have a good income year in 2022, a range of global market factors are contributing to higher fertilizer prices.

Fertilizer prices have been rising since 2020, reaching extremely high levels in the fall of 2021 (see Figure 1). According to the Agricultural Marketing Service, farmer-paid prices for anhydrous ammonia were $487 per ton in 2020, increasing to $746 per ton by July 2021 (see farmdoc daily, August 3, 2021). The price continued to grow, reaching over $1,000 per ton in October 2021. Illinois ammonia prices continued to increase to $1,498 on February 10 and $1,503 on February 24, the day Russia invaded Ukraine. On March 23, the ammonia price was $1,516 per ton, increasing little from the reference point before the invasion. 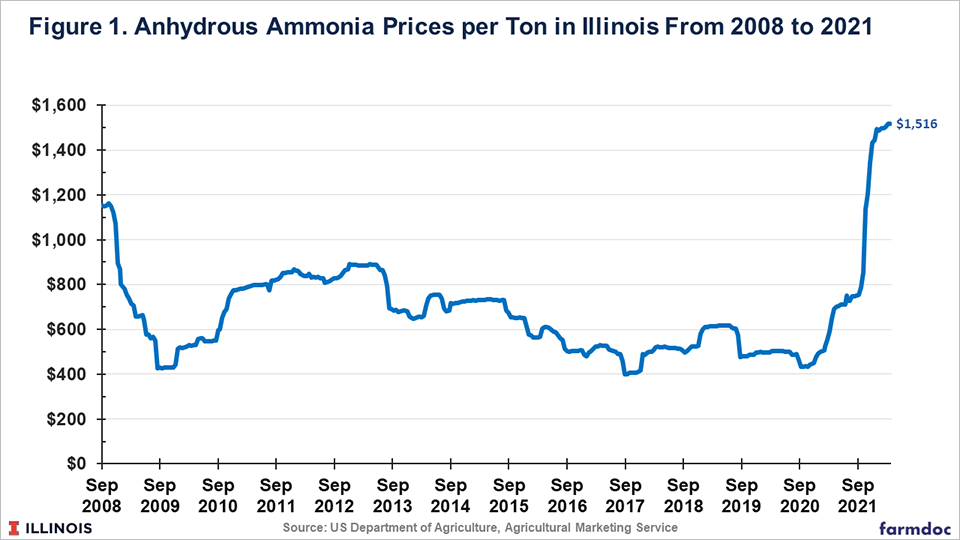 Up through October, farmer-paid prices can be attributed to the typical factors that cause corn and natural gas price rises. There are high correlations between corn, natural gas, ammonia prices, and most commodities, including crude oil. Up through October 2021, commodity price increases were responses to disruptions caused by the Covid pandemic and resulting price inflation. Large stimulus payments made by the Federal government also caused inflationary pressures. Anemic responses by the Federal Reserve Bank (FED) to combating inflation reinforced price inflation.

In October 2021, anhydrous ammonia far exceeded prices suggested by the traditional relationship between corn and natural gas prices, often by $300 and $400 per ton. Other factors are impacting those prices. U.S. ammonia production was reduced because of the planned maintenance of U.S. production plants and Hurricane Ida extending plant stoppages. During the summer, CF Industries, a North American nitrogen producer announced an antidumping petition for ammonia nitrate solution (UAN) against Russia and Trinidad and Tobago (see Business Wire, June 30, 2021), potentially decreasing fertilizer supply and increasing price.  Natural gas and ammonia prices outside the U.S. also played a role in the divergence.

Natural Gas Prices in the U.S. and Europe

Natural gas prices in the U.S. and Europe began diverging in 2020, with Europe having much higher prices since mid-summer 2021 (see Figure 2). The U.S. and Europe natural gas markets are reasonably separate because of difficulties in moving significant amounts of liquified natural gas from North America to Europe. Without additional investment, shipping and off-loading facility capacities limit intercontinental movements. 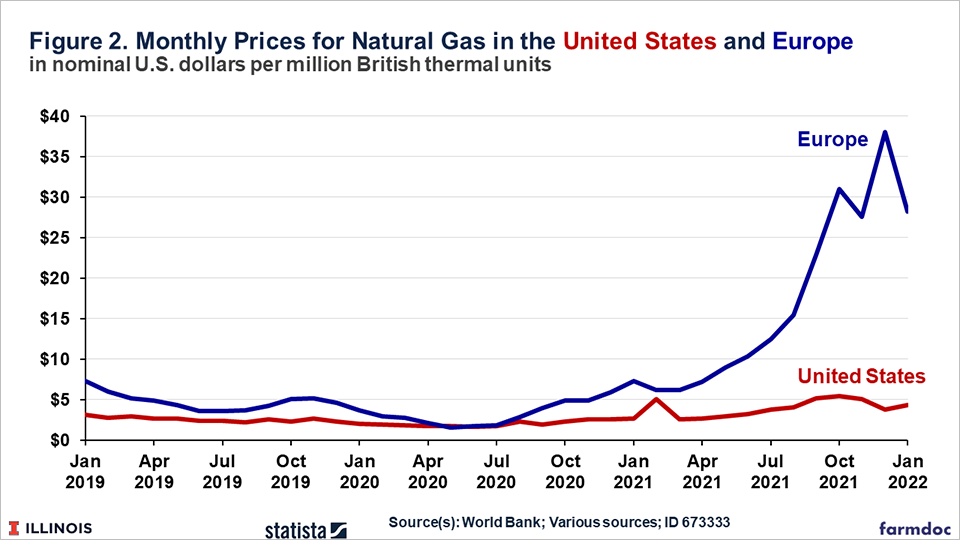 In recent years, natural gas markets in the U.S. and Europe have developed under dramatically different circumstances. The U.S. has gone through a fracking revolution which increased the natural gas supply. On the other hand, Europe has undertaken higher reliance on renewable energy as a replacement for fossil fuels. For example, Germany is phasing out nuclear power and coal-burning power plants. Natural gas is viewed as a bridge fuel for renewables. Europe relied on Russia for 40% of its natural gas, and there were concerns that Gazprom — a Russian company — was withholding supplies to increase the price (see Liboreiro and do Filipino). By the summer of 2021, Europe was facing much higher prices than the U.S.

The Ukraine-Russian war has exacerbated natural gas and nitrogen fertilizer concerns. Europe has a stated goal of reducing its reliance on natural gas from Russia. Russia is one of the largest holders of natural gas reserves, with Russia and Iran having over one-third of total reserves (see Statistical Review of World Energy, 202, 70th edition, page 34). However, transitioning away from Russian supply will result in higher natural gas prices in Europe (see IEA Press Release, March 3, 2022 ). As a result, European production of nitrogen fertilizers will face a disadvantage relative to the U.S., where natural gas is more plentiful and already at lower prices.

Russia also is a significant producer of fertilizer ingredients, including nitrogen, accounting for 23% of ammonia exports. Russia has announced plans to restrict fertilizer exports, and sanctions against Russia could further heighten export barriers. Eliminating 23% of world-wide nitrogen exports will severely affect the nitrogen market. As a result, countries that rely on Russia will need to find alternative sources of nitrogen, including Brazil. Brazil imports 95% of its nitrogen fertilizers, with 21% of those imports coming from Russia (see farmdoc daily, March 17, 2022).

Pricing by nitrogen manufacturers has come under scrutiny in recent months. The relatively small number of firms involved in nitrogen fertilizer suggests that they have market power to influence prices, a suspicion that is difficult to prove and may not be related to the number of firms in the industry, particularly in a commodity-based market. We note that retail fertilizer prices are highly related to corn prices, suggesting that demand conditions and assessment of farmers’ abilities to pay influence nitrogen fertilizer companies’ pricing decisions. We also note North American fertilizer companies are likely to benefit from the current market conditions and have a good financial year in 2022, which is supported by changes in stock prices. C.F. Industries’ stock price rose by 41% from the beginning of the year till April 1. Nutrien’s price increased by 36%.

Still, the primary responsibility of publicly traded stock companies is to their shareholders, and that responsibility includes generating profits. Moreover, nitrogen fertilizers are commodities traded in global markets. Therefore, North American manufacturers will have opportunities to market North American-produced fertilizers outside of North America, including into Brazil. At the very least, Trinidad and Tobago’s production that has traditionally gone to the U.S. could easily find a different outlet in Brazil. As a result, expectations should be for continued high and perhaps increasing nitrogen fertilizer prices in the United States. Indeed, this market process of increasing prices shifts fertilizer sales to where they are most profitable, which could be outside of the United States.

Through this process, farmers will pay higher prices for fertilizers, and that will result in lower net incomes (see farmdoc daily, November 16, 2021). Higher nitrogen fertilizer prices also will impact farmers’ decisions. Those decisions could lead to a substitution away from corn for soybeans in the Midwest. Indeed, this appears likely to happen in 2022, as the recently released Prospective Plantings indicated a 3.8 million acre shift from corn to soybeans in 2022 (see farmdoc webinar, March 31, 2022).

Concerns about nitrogen fertilizers will continue as the Russia-Ukraine War shocks the natural gas and fertilizer markets. The pricing of fertilizer manufacturers will continue to come under scrutiny. While fertilizer manufacturers likely will gain financially from current market conditions, those companies did not create the situation that led to current conditions. Covid and the pandemic response have pressured supply chains and changed the nature of input demand. Inflation has risen with Federal and monetary policy doing little to limit that inflation. Europe undertook policies to replace fossil fuels that increased reliance on natural gas and Russia as a natural gas supplier. Most recently, the Ukraine-Russia war has pressured natural gas and fertilizer supplies.

Fortunately, there is a robust North American fertilizer industry, and a relativity plentiful supply of natural gas in North America. While rising fertilizer prices will reduce farm returns and potentially increase food prices in the U.S., these effects are likely to be greater in other parts of the world which rely more heavily on imports for food and fertilizer.

This article listed the factors that have impacted nitrogen fertilizer prices up to this point. Further research could examine the relative impacts of each of those factors on nitrogen prices.

Beckman, Jayson and Stephanie Richie, “Chances to the Natural Gas, Corn, and Fertilizer Price relationships from the Biofuel Era, Journal of Agricultural and Applied Economics 47(2015): 494-509.

Bekkerman, Anton, Thomas Gumbley, and Gary W. Brewster. “The Impacts of Biofuel Policies on Spatial and Vertical Price Relationships in the US Fertilizer Industry.” Applied Economic Perspectives and Policy. 43(2021): 802-22. https://www.choicesmagazine.org/choices-magazine/submitted-articles/the-history-consolidation-and-future-of-the-us-nitrogen-fertilizer-production-industry

Liboreiro, Jorge and Alberto de Filippis. “Why Europe's Energy Prices Are Soaring and Could Get Much Worse.” EuroNews, October 18, 2021. https://www.euronews.com/my-europe/2021/10/28/why-europe-s-energy-prices-are-soaring-and-could-get-much-worse