For 2023, growing wheat followed by soybeans (wheat-double-crop-soybeans) currently is projected to be more profitable than growing either corn or soybeans, particularly in southern Illinois. Much of the higher projected profitability is due to higher prices caused by the Ukraine-Russia Conflict. However, in the longer run, yield increases in wheat-double-crop-soybeans need to occur before widespread practice adoption is warranted. We reach this conclusion by comparing calories and crude protein production across rotations. Calories and protein production are not that much greater for rotations containing wheat-double-crop-soybeans than for a standard corn-soybeans rotation, particularly on high-productivity farmland in central Illinois.

Three reasons for this focus on double-crop-soybean rotations are:

Comparison of Calories and Protein in Different Cropping Combinations

Planting corn, soybeans, and wheat-double-crop-soybeans will obviously result in different mixes of grains and oilseeds produced, all of which have specific uses. Our purpose here is to provide standardized comparisons across some common crop rotations. To make those comparisons, we use two measures:

Note that there are issues with both measures. For example, there are different types of proteins in the three crops, some more digestible than others, requiring more detailed comparisons when making production decisions, such as when balancing livestock rations. Still, the above two measures provide a useful gauge for comparing across crops.

Table 1 compares corn, soybeans, and wheat-double-crop-soybeans production on high-productivity farmland in central Illinois (Panel A) and southern Illinois (Panel B). For both regions, yields are at their 2022 expected levels, according to Illinois Crop Budgets. 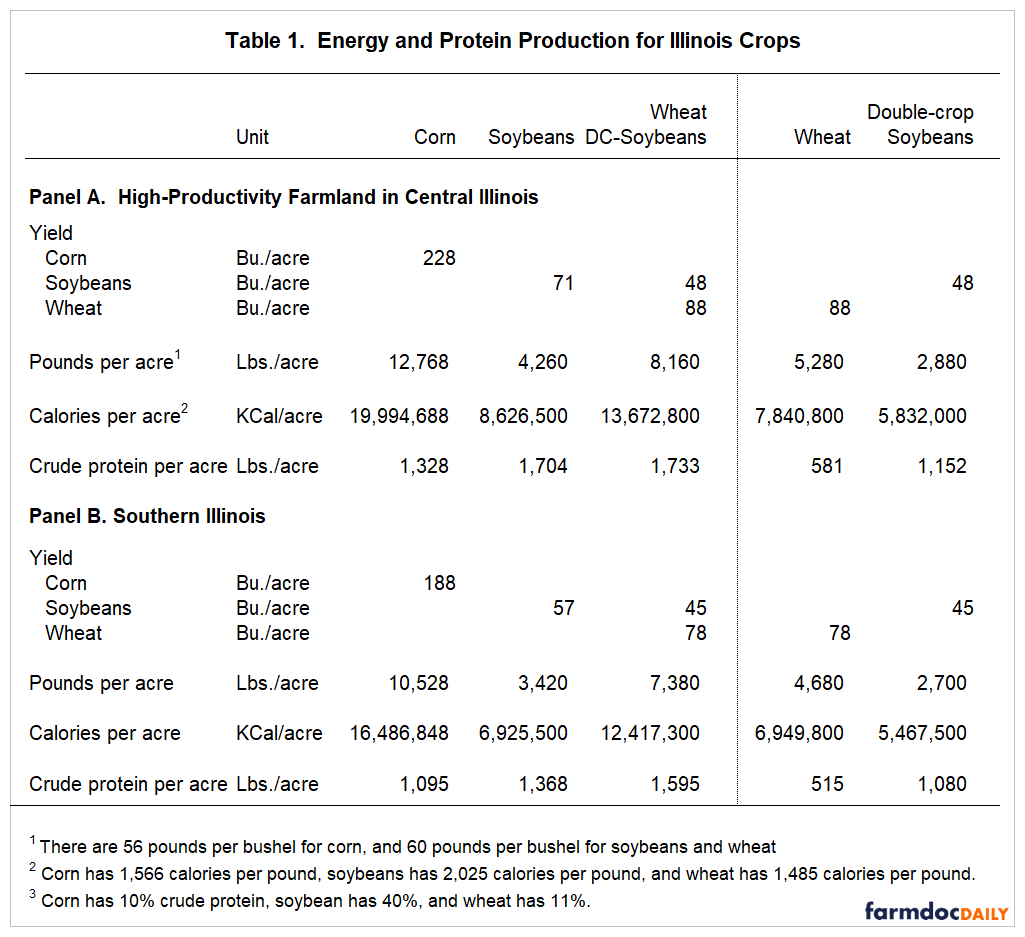 The expected corn yield for high-productivity farmland in central Illinois is 228 bushels per acre or 12,768 pounds per acre (see Table 1). This corn contains 20.0 million calories, the highest of all three crops by a large margin. According to the May 2022 World Agricultural Supply and Demand Estimates (WASDE) report, 43% of corn use is for feed, while 34% is used in ethanol production. Both uses are related to energy use. Corn provides 1,328 pounds of crude protein per acre, the lowest of the three crop combinations.

Soybeans have an expected yield of 71 bushels per acre or 4,260 pounds per acre (see Table 1). Soybeans contains 8 million calories per acre, much lower than that from corn. According to the May 2022 WASDE report, 49% of U.S. soybean use is in “crush,” which produces soybean oil meal (SBOM) and oil as joint products. SBOM is predominately used as a protein source in livestock feed. Another 48% of U.S. soybeans are exported. In the exported country, most soybeans will be used in their domestic crush. Soybeans have 1,704 pounds of crude protein per acre.

Food use is projected to be 51% of the use of wheat, while feed accounts for 4% of use (WASDE, May 2022). If wheat production exceeds food use, wheat could be used as livestock feed, at which point wheat would have to compete with corn as an energy source in livestock rations.

Crop and Rotational Impacts on Total Energy and Protein Production

Raising different crops and rotations will result in different levels of energy and protein production. Figure 1 shows differences relative to a 50% corn and 50% soybeans rotation, a standard rotation in central Illinois. These are average values over all crops in the rotation.  In Figure 1, the corn-soybean rotation is located at the zero point of both the calorie change and crude protein change axis. A stand-alone corn crop is in the lower-right quadrant, producing 40% more calories per acre but 12% less crude protein than the corn-soybeans rotation. At the other extreme is soybeans. Soybeans are in the upper-left quadrant, with 40% fewer calories per acre but 12% more crude protein per acre. 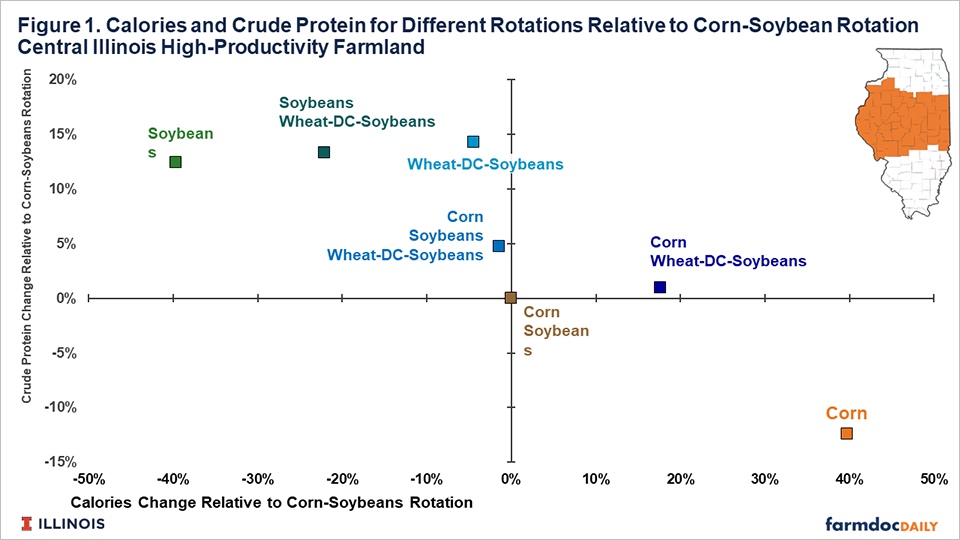 As a way to diversify their rotations, some farmers may add wheat-double-crop-soybeans to a corn-soybeans rotation, resulting in a three-year rotation. This rotation has 1% fewer calories produced than the corn-soybean rotation but 5% more crude protein per acre. 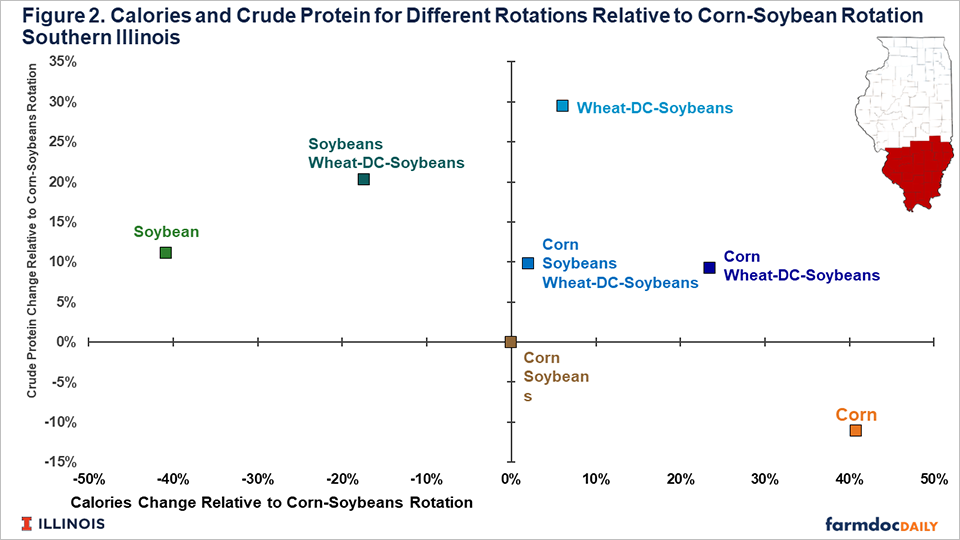 Since the beginning of the Ukraine-Russia war, prices for corn, soybeans, and wheat have increased, but the price of wheat has increased relatively more. Wheat-double-crop-soybeans are currently projected to be more profitable than corn and soybeans. Farmers will consider these expectations as they make planting decisions for 2023. Expected prices can change between now and fall when wheat would be planted, changing relative profits between the cropping options.

In the longer run as prices move back to more normal relationships, yields from wheat-double-crop-soybeans need to increase before widespread adoption occurs, particularly in high-yielding areas such as central Illinois. Gains, measured by total calories and crude protein produced, from including wheat-double-crop soybeans are not that great, suggesting a switch to the more intensive practice is not likely without some other incentive. Moreover, a switch to more wheat would decrease wheat prices. A higher price for wheat is possible for food uses. Once food demand is met, wheat will have to compete with corn for space in livestock rations. Wheat likely will have difficulty competing with corn due to its lower calories per acre relative to corn.

Some technological breakthroughs could include a combination of: