Brazil’s second corn crop, also known as the safrinha (Portuguese for “little harvest”), is expected to produce 3,465 million bushels in the 2021/22 crop season, 45% higher than last season’s 2,391 million bushels, when Brazil was affected by drought. That total would be record-breaking, according to time series data from the National Supply Company (Conab), an agency in the Brazilian Ministry of Agriculture. Brazil may produce a historic crop even though April and May were drier than normal. More than 70% of the corn produced in Brazil is from the safrinha, planted right after the soybean harvest, typically in January and February.

Overall safrinha harvest is reported at 5%, according to last June report from Conab. Harvest will continue through September. The start of this year’s harvest coincided with news that Brazil and China had completed negotiations for Brazil to begin exporting corn to China, which traditionally has imported corn from the United States and Ukraine. Brazil is the world’s third-largest corn producer and exporter behind the U.S. and China.

Seasonal drought intensified in parts of Brazil in the first weeks of May, according to the Agricultural Monitoring Bulletin (BMA), a partnership between the Conab, National Institute of Meteorology (Inmet) and the Global Agriculture Monitoring Group. Corn planted in summer is suffering because of low soil moisture in some areas. The main areas affected by dry weather are, by state, west Bahia; north and northwest Minas Gerais; all of Goiás; southeast Mato Grosso; east Mato Grosso do Sul; and northwest São Paulo.

Harvest of this season’s safrinha has begun in Mato Grosso, Brazil’s largest corn producer, accounting for almost half of the nation’s safrinha production. According to the Mato Grosso Institute of Agricultural Economy (IMEA), 16% of the state’s crop had been harvested as of Jun 10. The precipitation reduced since April led to declines in soil moisture during reproductive stages. However, with most of the crop planted within the ideal window, a modest fraction of the crop was affected by low rainfall (USDA, 2022).  Yields are expected to be good – about 97.5 bushels per acre.

Parana is Brazil’s second-largest corn-producing state, typically accounting for about 15-20 percent of the national harvest. About 80% of the cornfields in the southern states are in good condition; the remainder are considered to be in average or poor condition. In the Matopiba, a region comprising four Brazilian states (Maranhão, Tocantins, Piauí, and Bahia) in the northeast, crops are generally in good condition, although there are exceptions in some areas where soil moisture is low.

Goiás state, in the Midwest of Brazil, remains dryer than normal and recently experienced extremely cold weather, but crop damage has not been reported. In Mato Grosso do Sul, also in the Midwest, there were frosts in several regions. But the rain that preceded the cold guaranteed good moisture for crops in center and south Brazil. In the North, however, the lack of water is expected to lower production estimates.

Despite low soil moisture in some regions, the early planting of second-crop corn allowed crops to develop better than the last crops in most regions, according to the Conab. See Figure 1 for a comparison between last year’s safrinha, affected by severe drought, and this year’s expected crop. 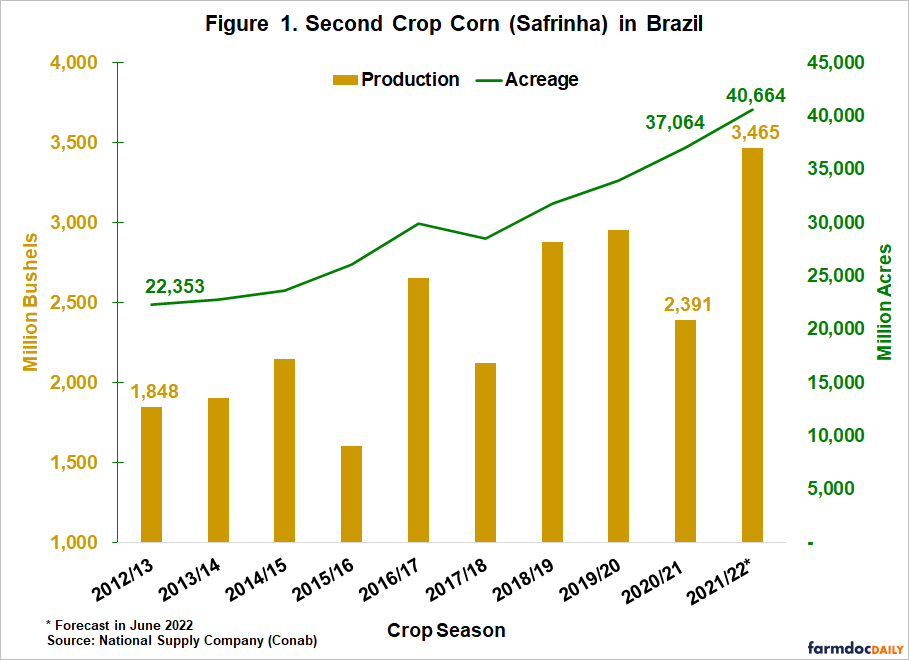 Yield declines in drought-affected states are offset by gains in other states. Brazil is expected to have yields of about 85 bushels per acre, 32% higher in comparison to last season. In relation to the last 10 years average, the expected yield for this year is 5% higher (see Figure 2). A key factor in safrinha variability is the timing of the onset of the dry season in Brazil. If the onset is early or if safrinha is planted late, the probability of dry weather negatively impacting yields is higher. By nature, the 2nd corn crop is risky (see farmdoc Daily January 12, 2022). 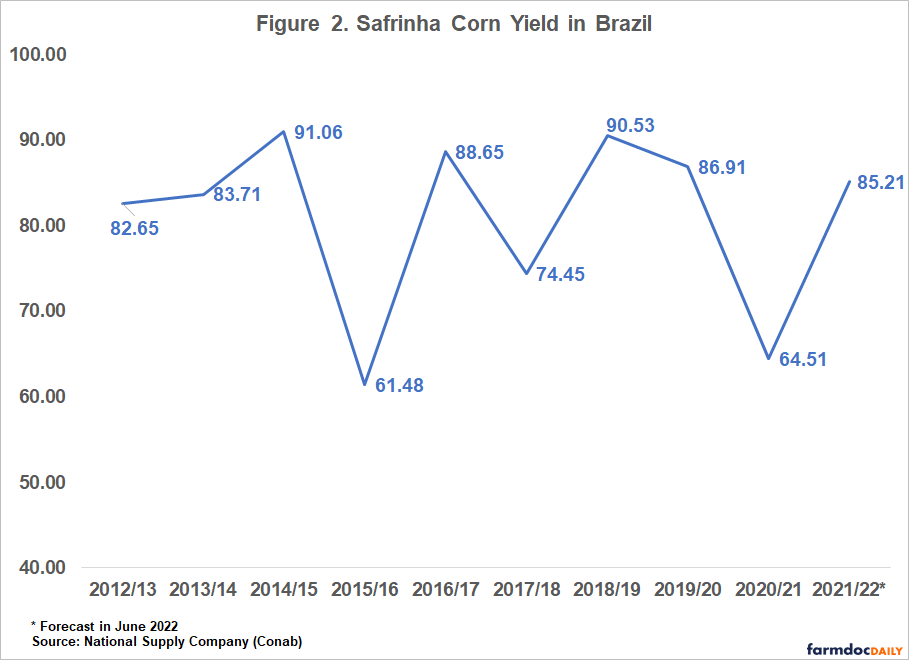 In addition to the expected good yields, an 9.7% increase in planted area is another factor that will help Brazil break a record in safrinha production. The area planted this year exceeded the 40 million acres mark for the first time (see Figure 1). The current year’s acreage increase is similar to the variation in the last crop season, when the number of planted acres rose 9% compared to 2019/20. The 3,600 million acres expansion in corn area planting this year was primarily driven by the increasing profitability of the crop given current high domestic and global prices. The corn index from the Center for Advanced Studies in Applied Economics (Cepea) showed the price surpassing R$ 101 (around US$ 20) per 60-kilogram (kg) bag of corn in March 2022, a new record for Brazil. The price in May 2021 was R$ 100, however, hopes for record-setting production were dashed by inclement weather.

In an average harvest season, corn prices in Brazil generally fall as harvest peaks during June-July and new supply comes into the market. However, corn prices could continue to climb in the coming months, following a global price spike. The U.S. corn production in progress will determine what prices will do in Brazil. Above trendline US yield, highs may be near current levels.  Below trendline US yield, highs are probably not in. So far, corn prices for 2022 fall delivery are at high levels (see farmdoc Daily May 24, 2022). The current price trend is also associated with the war in Ukraine, which has disrupted port operations and commercial activity in the Black Sea, sharply increasing uncertainty in the global corn market.

The start of this year’s safrinha harvest coincided with the news that China, in pursuit of improved food security as a result of the Ukraine crisis, signed an agreement with Brazil to increase cooperation in the corn trade. According to a statement from China’s Ministry of Commerce, China’s General Administration of Customs and Brazil’s Ministry of Agriculture have agreed on an updated protocol outlining the phytosanitary – plant health and safety – requirements for the export of Brazilian corn to China.

The two countries had signed a phytosanitary protocol in 2014, but China has rarely imported corn from Brazil since then. In the 2021-22 marketing year, for example, China has imported one 35,000 tons shipment. The major impediments to trade were said to be the long shipping time and high freight cost. It has been faster and cheaper for China to import corn from the U.S. and Ukraine. However, Russia’s invasion of Ukraine has severely curtailed its grain exports and Brazil, being one of the largest exporters of corn, could meet China’s demand.

Before large-scale corn shipments from Brazil to China begin, the nations will have to reach an agreement about transgenic (GMO) corn. More than 90 percent of the corn Brazil produces is transgenic. China has increased its grain imports the last two years as demand has risen while the planted area in China has not increased.

Despite low soil moisture in some regions of Brazil, the nation’s second corn crop is expected to be the largest in the nation’s history. Expected good yields and an increase in planted area are key factors driving the expected record. Because domestic and global prices for corn are expected to continue to increase, Brazilian farmers are planting corn in more areas. The start of this year’s harvest coincided with the news that China, in pursuit of improved food security in the wake of the Ukraine crisis, has signed an agreement with Brazil to increase cooperation in corn trade. China traditionally has imported corn from the U.S. and Ukraine.

Schnitkey, G., K. Swanson, C. Zulauf and N. Paulson. “Potential 2022 Fall Prices for Corn and Soybeans Based on History.” farmdoc daily (12):76, Department of Agricultural and Consumer Economics, University of Illinois at Urbana-Champaign, May 24, 2022.