After a marathon session known as a vote-a-rama, the U.S. Senate passed the Inflation Reduction Act of 2022 on Sunday, August 7, 2022.  Technically, the Senate agreed to a substitute amendment that replaced all provisions of a bill previously passed by the House in November 2021 (Inflation Reduction Act of 2022 (H.R.5376), Engrossed Amendment Senate).  Both versions are reconciliation bills, and both include provisions written by the House and Senate Agriculture committees.  The Senate amendment includes a $43.7 billion infusion of funding to four categories of programs under the jurisdiction of the Senate Committee on Agriculture, Nutrition, and Forestry.  An initial review of the legislation is provided in two articles; today’s article looks at the reconciliation background and the funding for conservation programs in the Farm Bill.[1]

The Inflation Reduction Act has consumed more than a year of work and negotiations in the 117th Congress.  As of this writing, the Senate has passed it as an amendment that replaces the House bill passed in November 2021; expectations are that the House will agree to the Senate amendment on Friday, August 12, 2022, and send it to President Biden to be signed into law.  If so, the IRA 2022 will provide nearly $44 billion in funding to agricultural conservation, rural development and forestry programs as follows:

Figure 1 illustrates the breakdown of funding by the Senate Committee on Agriculture, Nutrition, and Forestry. 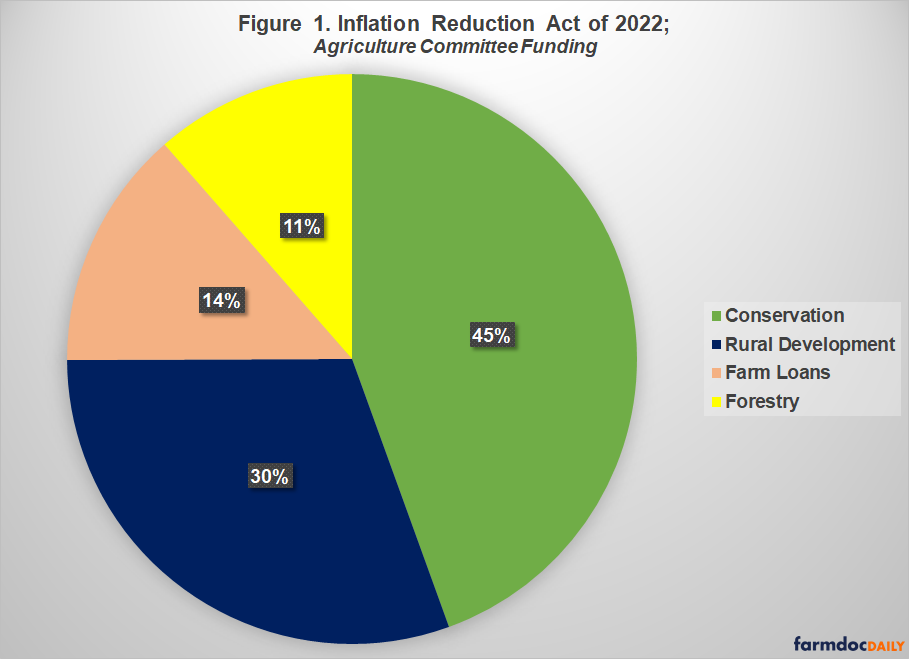 Figure 2 illustrates the appropriated amounts in each fiscal year as written in the legislative text.  Notably, most of the funding is provided for FY2022 but conservation is the exception, as are some of the rural development funds.  The conservation programs receive specified appropriations across multiple fiscal years, increasing to the maximum amount in FY2026. 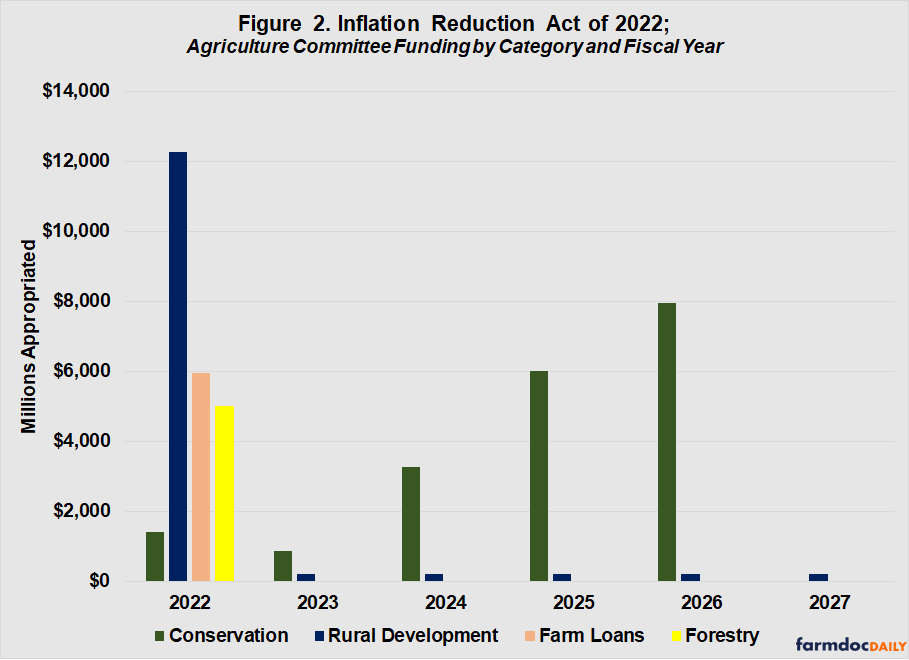 Most of the total funds appropriated in the IRA 2022 are designed to rapidly advance efforts to respond to climate change, including by reducing greenhouse gas emissions from farming, capturing, sequestering, and storing greenhouse gases in soils, and advancing renewable energy in rural communities and on farms.  All of the funds are in addition to funding authorized in the farm bill, and all appropriated through the complicated and controversial reconciliation process.  To comply with the reconciliation instructions, the House and Senate Agricultural Committees wrote a form of multi-year appropriation, using “any money in the Treasury not otherwise appropriated.”  The rest of this article will provide a detailed discussion of the reconciliation process and the IRA 2022 funding for conservation programs.

The Inflation Reduction Act (IRA) of 2022 is not ordinary legislation, nor legislation in the ordinary course of business or the regular order of Congress.  It is reconciliation legislation that operates under specific statutory authorities, and special procedural rules.  Federal budget law provides for the inclusion of reconciliation instructions in a concurrent budget resolution (2 U.S.C. §641).  Reconciliation consists of instructions written by the Congressional Budget Committees and agreed-to by both the House and Senate in the budget resolution, but not signed into law by the President.  Congress instructs committees to take actions related to the budget, which are compiled into a single legislative vehicle that is considered under special rules.  Most notably, budget reconciliation legislation is not subject to the Senate rules for debate and filibuster, meaning it can be passed by that chamber without the 60-vote cloture requirement.  Reconciliation legislative text, however, must abide by specific rules; the most notable of which concerns non-budgetary or extraneous matters and is commonly known as the Byrd rule, named for the late Senator Robert C. Byrd (D-WV) (2 U.S.C. §644).

To comply with reconciliation, any changes in outlays by the House and Senate Agriculture Committees had to be within their jurisdiction and not merely incidental to the non-budgetary components.  Moreover, all changes in outlays had to fit within the reconciliation window of FY2022 through FY2031; no spending provided in the bill could be scored by the Congressional Budget Office (CBO) to take place in any fiscal year after FY2031.  As will be discussed further below, reconciliation rules limited what the committees could provide and required various provisions in the bill that kept all spending within the reconciliation fiscal year window. 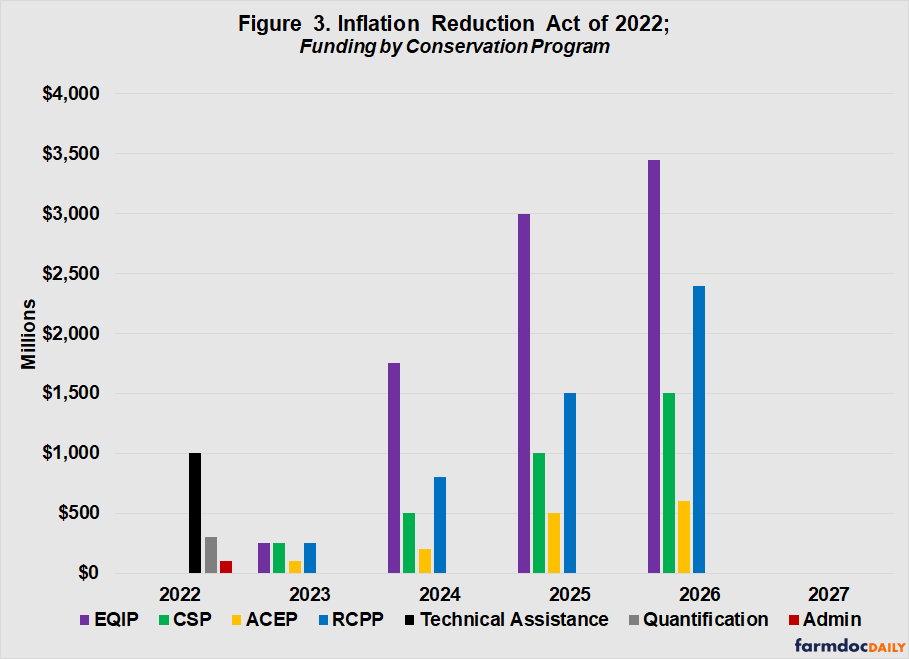 Again, Figure 3 illustrates the appropriated funds as written in the legislative text; CBO is expected to estimate outlays of those appropriated funds that are less than the total amounts (baseline and IRA 2022) available each fiscal year.  As such, the actual spending (outlays) from IRA 2022 would extend beyond FY2026 but under reconciliation rules will not extend beyond FY2031.  To comply with reconciliation, the bill requires USDA to spend the funds prior to the end of FY2031 (i.e., September 30, 2031) and to ensure that no contracts would spend funding after that date.  This is one of the oddities resulting from reconciliation that appear in the legislative text.  Reconciliation instructions operate for FY2022 (ends September 30, 2022) through FY2031 only and the bill cannot spend outside of that budgetary window.

Close observers of farm bills will note the conforming amendments language in the IRA, which extends all conservation program authorizations through fiscal year 2031 from the current expiration date of fiscal year 2023 (see e.g., IRA, Sec. 21001, at 543-45).  As summarized in Figure 4, the IRA extends authorizations for all conservation programs in Title II of the Farm Bill.  This includes the Conservation Reserve Program (CRP), which was not included in the IRA’s appropriations of additional funding.  The extension text is another oddity resulting from the reconciliation process and rules.  It is an example of how those rules are applied to programs in the farm bill context. 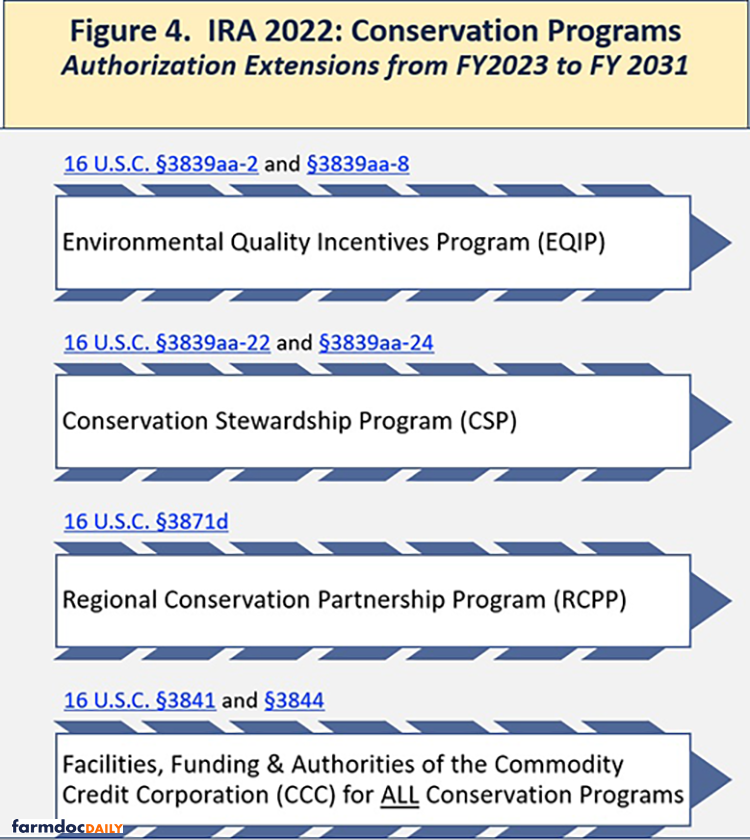 Federal budget rules require that the Congressional Budget Office (CBO) produce annual baseline projections for budget authority, outlays, revenues, and the surplus or deficit based on enacted laws.  Conservation programs, like the farm payment programs in Title I of a Farm Bill, are funded with mandatory funds from the Commodity Credit Corporation (CCC).  Under the complicated rules for federal budgeting, conservation programs are assumed for baseline purposes to continue to operate “in the same manner as the program operated immediately before the expiration” in the authorizing statute (2 U.S.C. §907).  It is this provision that results in conservation programs having baseline funding available for farm bill reauthorization; baseline, beneficial in the farm bill context, further complicates reconciliation.  Based on the budget rules, any changes in spending that occur in the final year of the program authorization (e.g., FY2023) would be added to the baseline.  If added to the baseline it would be assumed to continue in perpetuity and change spending outside the reconciliation window (FY2031), running afoul of the Byrd rule.  To avoid changing the baseline, the IRA 2022 legislative text extends conservation program authorizations through FY2031.  Doing so allows for the reconciliation funds to be spent within the reconciliation window and for the programs to return to the baseline by 2031, the last year of the authorization.

Figure 5 attempts to illustrate this using the CCC budget authority projections in CBO’s May 2022 baseline (green area) and the additional funding for conservation programs from IRA 2022 (navy bars).  The IRA appropriates $19.5 billion in additional funding, $18.1 of it to the farm bill conservation programs.  The IRA funds do not change the existing baseline (CCC funding) as authorized in the 2018 Farm Bill (see e.g., farmdoc daily, June 1, 2022).  These are two separate lines of funding (CCC and IRA 2022) to the same program authorizations, which would continue through FY2031. 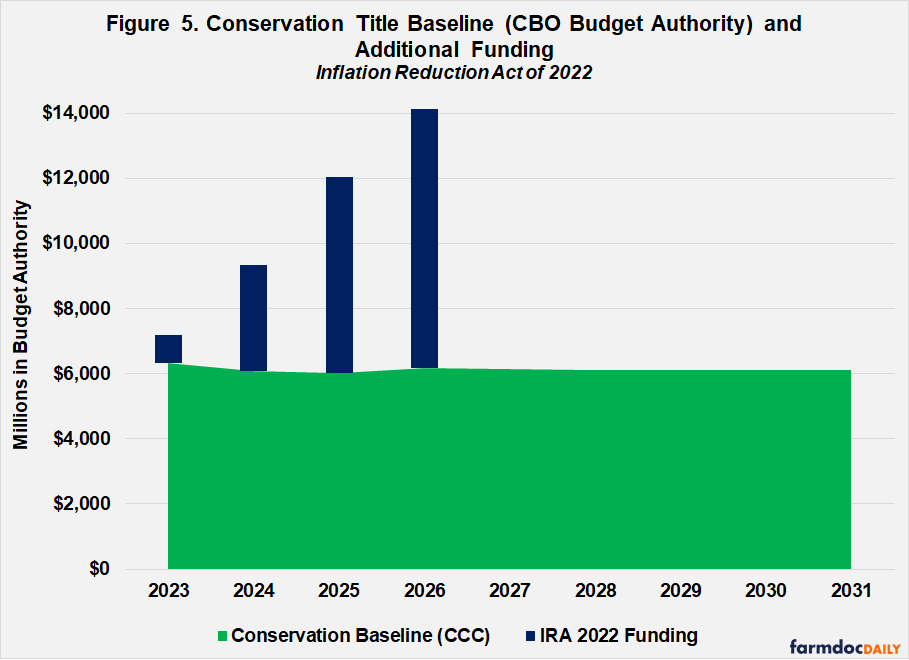 IRA 2022 also provides a boost in funding for conservation technical assistance of $1 billion that is available through 2031.  It also provides $300 million for “a program to quantify carbon sequestration and carbon dioxide, methane, and nitrous oxide emissions” by NRCS through collecting “field-based data to assess the carbon sequestration and reduction” in greenhouse gas emissions associated with farming and conservation practices.  Finally, it provides $100 million for administrative costs (IRA, 21002, at 545-46).  Figure 6 summarizes the breakdown of funds appropriated for conservation in the bill. 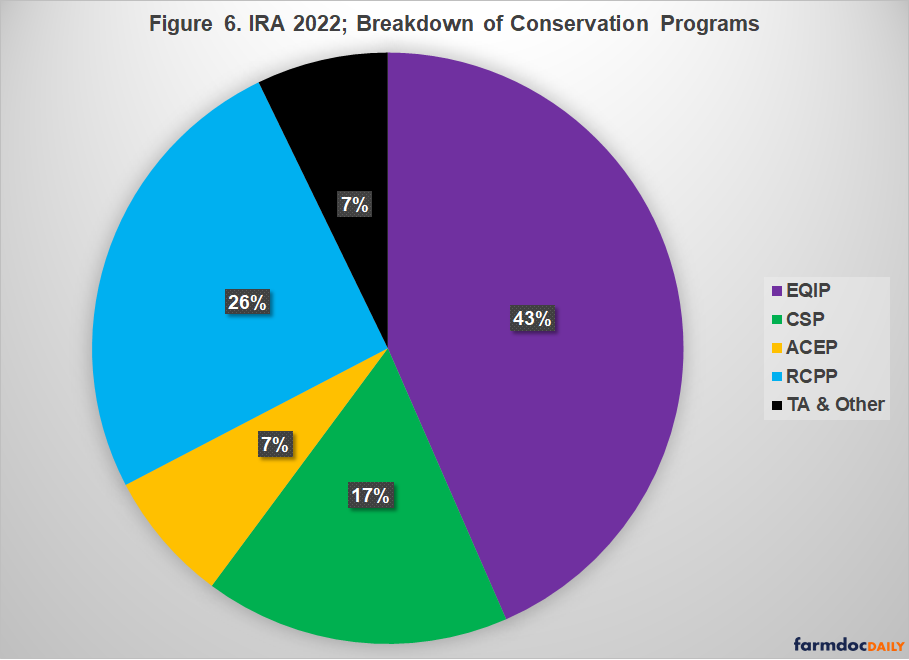 The Inflation Reduction Act of 2022 has been passed by the U.S. Senate and awaits a vote in the House.  If, as expected, the House agrees the bill will go to President Biden to be signed into law.  Part 1 of this review has covered the basics of the reconciliation process and the instructions that put in motion the effort in Congress to negotiate, write and pass the Inflation Reduction Act.  Part 1 has also reviewed the $19.5 billion in additional funding appropriated to conservation programs in the farm bill.  Part 2 will review the funding provided to other programs in the jurisdiction of the Senate Committee on Agriculture, Nutrition, and Forestry.

[1] In the interest of full disclosure, please note that Jonathan Coppess was on partial leave from the University of Illinois from April 2021 to March 2022 to assist the Senate Committee on Agriculture, Nutrition, and Forestry with reconciliation legislation on a part-time basis as a special counsel; his partial employment with the committee ended prior to finalization of the Inflation Reduction Act of 2022.