Since 2014, supplemental area plans of insurance have been introduced into the Federal crop insurance program.  These supplemental area plans – the Supplemental and Enhanced Coverage Options (SCO and ECO) – can be used to provide area-based protection for a portion of the deductible range associated with the farmer’s underlying individual plan of insurance.  Today’s article looks at the historical use to date of these products for a set of selected major crops (corn, soybeans, wheat, cotton, sorghum, rice, and peanuts). Use has shown signs of an upward trend in total covered acres, with 5% of potentially eligible acreage using SCO and 3% using ECO in 2021.  However, the relative use of the plans varies widely with some counties having a much more significant share of acreage carrying some form of supplemental coverage.

SCO was introduced as part of the 2014 Farm Bill and made available to producers starting in the 2015 insurance year.  ECO was developed privately and approved under section 508(h) of the Federal Crop Insurance Act, and made available for the first time for 31 crops in the 2021 insurance year. Both programs can expand to additional crops and areas based on experience and farmer demand over time.

SCO has an 86% trigger and covers the range down to the farmer’s individual coverage level (i.e. 86% down to 75% if used with 75% RP). ECO provides 90% and 95% coverage triggers that both extend down to 86%.  SCO eligibility is tied to commodity program choice in that only acres enrolled in PLC are eligible for SCO (acres in the county or individual ARC programs are ineligible), while ECO can be used regardless of commodity program choice.

Premiums for SCO are subsidized at a 65% rate, while the subsidy rates for ECO are 51% (yield coverage) or 44% (revenue coverage). Both supplemental programs can be used together with an underlying individual policy, or either one can be used on their own with the individual plan. Further details on the SCO and ECO programs can be found in daily articles from February 27, 2014, April 24, 2014, and November 24, 2020.

The notable increase in SCO covered acres in 2019 was likely associated with the temporary exception which allowed ARC-enrolled acreage to use SCO due to late passage of the 2018 Farm Bill, as well as the increase in base acres enrolled in PLC as producers updated their elections (see daily article from January 31, 2020). The continued increase in acreage covered by SCO since 2019 could simply reflect more acres being enrolled in PLC, and thus being eligible for SCO, than in prior years, or it could be an indication of a longer-term trend in the use of SCO.  Data over the next couple of years will help determine which of these explanations is more appropriate.

In relative terms, SCO use was on less than 2% of potentially eligible acres (total acres insured with YP, RP, or RP-HPE) nationally during the 2014 Farm Bill period but has trended upward from 3% to 5% of eligible acres during the 2018 Farm Bill period. Initial use of ECO in 2021 was on just under 7 million acres, or about 3% of total acreage covered by the YP, RP, and RP-HPE plans. 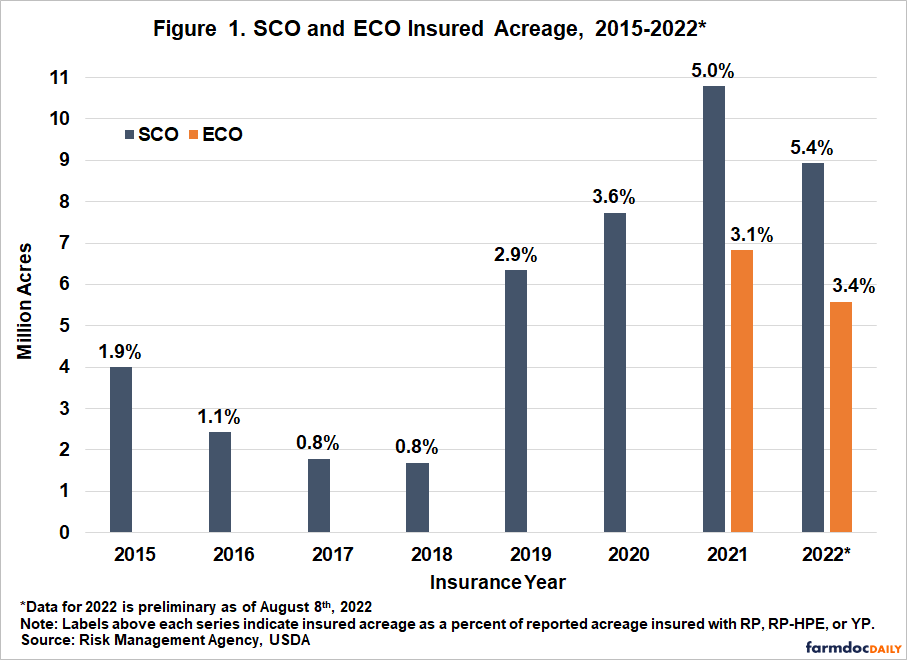 Data for 2022, as of August 8th, is also provided in Figure 1.  While these numbers indicate a potential decline in acreage covered by SCO and ECO, it is important to note that these numbers are still preliminary and will continue to be updated through the 2022 insurance year.  Furthermore, the preliminary data suggest slight increases in SCO and ECO use in relative terms compared with 2021.

Figures 2 and 3 illustrate the relative use of SCO and ECO, respectively, for the 2021 insurance year.  The maps are based on data for corn, soybeans, wheat, cotton, sorghum, rice, and peanuts which comprise over 96% of total insured acreage under the YP, RP, and RP-HPE plans of insurance. 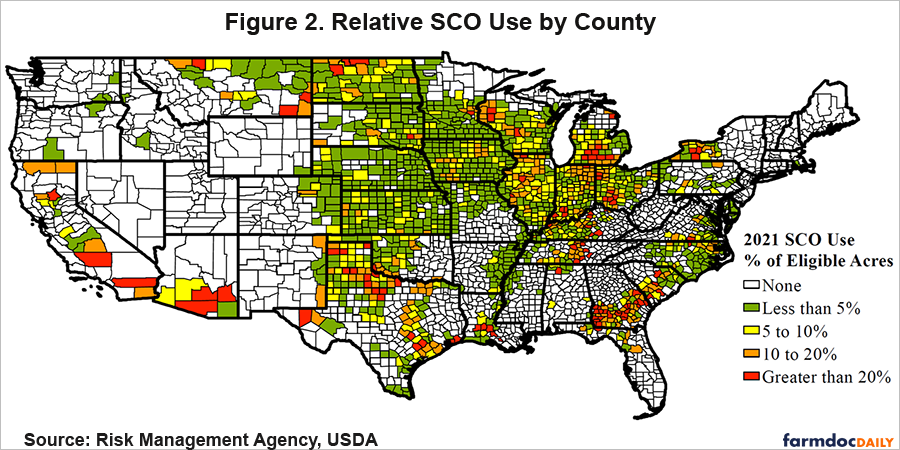 SCO use is widespread throughout the main Corn Belt, the southern portions of the Upper Midwest, into the Dakotas, Montana, and Plains region, and also along the Mississippi Delta.  SCO was also used in parts of California, Arizona, Texas, southern Georgia, and the eastern portions of the Carolinas.

While 5% of eligible acreage nationally used SCO in 2021, relative use varies considerably by county. Above average use occurred in counties throughout the US, with some counties having more than 20% of eligible acres with SCO coverage. 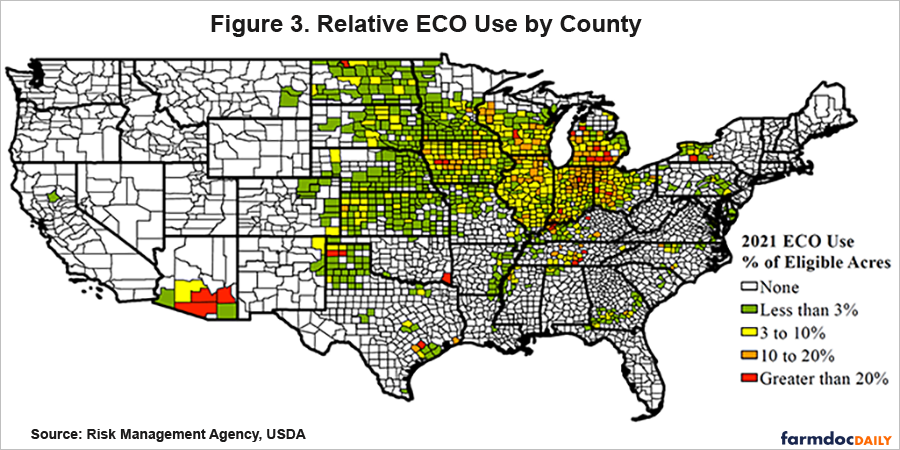 ECO use in 2021 follows a similar pattern, but with more concentration in the Corn Belt, Upper Midwest, and Plains.  Above average use tends to be concentrated in Illinois, Indiana, western Ohio, and the southern portions of Wisconsin and Michigan.

SCO and ECO provide the opportunity to supplement existing individual coverage. Farmers are able to purchase coverage for a portion of their deductible, effectively increasing their overall coverage level albeit with area-based coverage rather than individual farm-level coverage.  Motivations for using SCO and ECO likely vary by region.

The difference between area-based and farm-level coverage is often referred to as basis risk – or the potential that area-based losses will not closely match experience on the farm – and is typically viewed as a deterrent for area-based insurance products.  Measures of basis risk tend to be lower in the main Corn Belt region of the Midwest, which might help explain the use of both SCO and ECO throughout this region (see article from May 5, 2021 and May 6, 2021).

Areas outside the Midwest tend to experience greater yield variability and thus higher insurance premiums for farm-level products, particularly at higher coverage levels.  The use of SCO in these areas could be explained by the fact that area-based coverage will tend to be cheaper than individual coverage, thus allowing producers to achieve a higher overall coverage level at a more affordable premium level (see article from March 2, 2021 for some Illinois examples).

Acreage insured with supplemental area plans has been trending up since 2018, reaching nearly 18 million acres in 2021. Use thus far has been on a relatively small percentage of total insured eligible acres – just 5% for SCO and 3% for ECO in 2021.  However, relative use varies considerably across counties with some areas seeing much higher use (over 20% of eligible acres covered).  Basis risk and premium cost relative to individual coverage may explain some of the geographical variation in the use of SCO and ECO.