On August 25, the USDA’s Foreign Agricultural Service released its weekly Export Sales Report using a new reporting system. Based on some implausible values in this report, regular users of these data began to suspect the report was inaccurate. USDA quickly retracted the report and postponed further export sales report releases. (For more details, see: Maltais and Osipovich, 2022 and Huffstutter and Plume, 2022.) On September 1, 2022, USDA announced it would revert to its legacy export sales reporting system until it can resolve its technology issues. Public reporting of export sales data is expected to resume on September 15, 2022.

Based on the information we do have, prospects for old-crop US corn and soybean exports are mixed. Corn exports are unlikely to reach expected marketing year totals if now-unobservable export sales commitments in late August followed typical historic patterns. Predicting new-crop export sales in the absence of USDA data is more difficult for reasons noted above.

A second, broader question pertains to the value of having publicly available USDA export sales data for agricultural commodity markets. What will be lost by not having export sales reports released each week? Obviously, the lack of export sales reporting does not preclude exporters from arranging new sales. Trade in agricultural commodities will not cease. Neither does it eliminate all public information. Export Sales Reports are just one data item among many provided by USDA and other sources. However, greater uncertainty about export sales may generate some trade frictions.

Past instances where USDA reports were not released due to federal government shutdowns shed some light on this question. Analysis of those cases suggests options-implied volatility and thus the cost of risk management using options was elevated. However, those shutdowns affected nearly all USDA data products which would be expected to have a larger effect.

The State of US Corn And Soybean Export Sales

Old-crop corn and soybean export sales for the 2021-22 marketing year have both been strong, higher than the previous 5-year average though below record levels set in the previous 2020/21 marketing year. USDA’s most recent World Agricultural Supply and Demand Estimates (WASDE) from August project 2021/22 US exports of 2,450 million bushels for corn and 2,160 million bushels for soybeans. 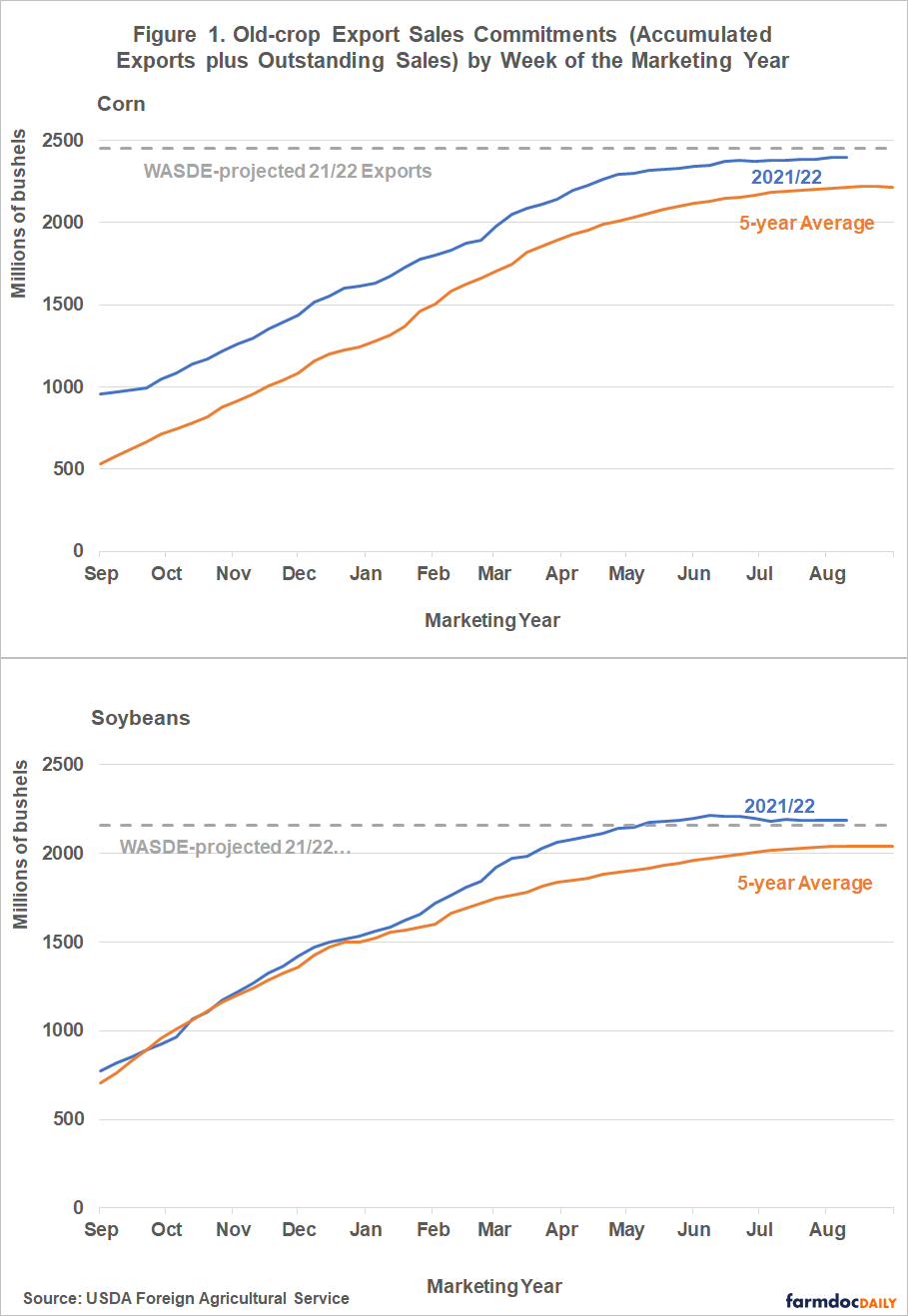 In the absence of actual export sales reports from USDA, it is unreasonable to expect 50 million bushels in corn export sales to materialize. Meanwhile, 2021/22 soybean export sales will reach WASDE-projected levels even if some outstanding sales commitments were cancelled in the final weeks of the marketing year. The obvious limitation to this conclusion is that it assumes the present will be similar to the past.

New-crop export sales are more difficult to pin down in the absence of regular weekly export sales data. The initial weeks of a new marketing year are typically one of the most active times of year for export sales. For instance, the average week-over-week change in export sales commitments in the first five weeks of a new marketing year observed between 2016 and 2020 is about 57 million bushels per week for corn and just over 75 million bushels for soybeans. The range of historical outcomes during this period is large. The loss of USDA export sales data during late August and early September implies greater uncertainty about the state of export demand during a period where export demand may be volatile.

What Is Lost When Export Sales Reports Aren’t Reported?

The broad rationale for USDA information provision on agricultural commodity markets is as follows: better information about supply and demand conditions allows traders to discover market prices that more accurately reflect the value of those commodities. More accurate prices then improve resource allocation decisions along the supply chain. (Gouel, 2020)

But what happens when this public information is not available? This is a more difficult question to answer because USDA has consistently provided public information to commodity markets since the 19th century. Detailed data like that in the WASDE and Export Sales reports has been available since the 1970s. However, two recent studies (Adjemian, Johansson, McKenzie and Thomsen, 2018 and Goyal and Adjemian, 2021) consider unique cases where federal government shutdowns stopped the release of the October 2013 and January 2019 WASDE reports. These studies found no evidence that corn and soybeans were mispriced, but some indication of higher market volatility in the absence of these reports. Specifically, decreases in options-implied volatility and options prices that typically follows the release of USDA reports was not observed in October 2013 and January 2019.

The temporary absence of USDA Export Sales Reports may have a similar impact as did these missing WASDE reports. However it is important to note that export sales data are only one piece of market-relevant information; the WASDE report contains a more comprehensive picture of commodity supply and demand. There may be slightly elevated price volatility in the absence of export sales reports over the next few weeks and additional volatility on September 15 when export sales reporting resumes as market prices are reconciled with new data.