On Monday, September 12, the USDA released its latest World Agricultural Supply and Demand Estimates, or WASDE. The WASDE report provides an updated point of reference for agricultural commodity price expectations. This article discusses changes made by USDA to its new-crop US corn and soybean balance sheets and two things to watch going forward: the response of South American production to below-trend US yields and elevated commodity prices.

USDA lowered projected 2022 corn and soybean production. Observed production changes were the largest since initial new-crop supply estimates were released in May of this year.  Harvested acreage and yield estimates were both below previously projected levels. This was somewhat unusual in that the National Agricultural Statistics Service chose to release updated acreage estimates in September rather than October because it deemed other agency data substantially complete enough to do so. What this implies for further adjustments to 2022 acreage estimates is unclear.

Table 1 shows changes in the new-crop 2022/23 US balance sheets for corn and soybeans between the August and September WASDE reports. For corn, projected US production for 2022 is decreased by 415 million bushels to 13,944 million bushels. Harvested acres and yield were lowered 1.2% and 1.7% respectively. Thus, acreage and yield adjustments were roughly equally responsible for changes in estimated corn production.

For soybeans, projected 2022 production is lowered by 153 million bushels to 4,378 million bushels. Harvested acres are expected to be 600,000 acres lower, or 0.6% less than previously anticipated. Bigger changes for soybean production pertain to yield. After raising expected soybean yields in the August report, USDA dramatically cut its yield forecast by 2.7% from 51.9 bu/ac to 50.5 bu/ac. Unlike changes to corn yield, which were largely anticipated by the trade prior to the report, declines in soybean yield were unexpected and soybean prices moved dramatically in the initial post-report reaction period. 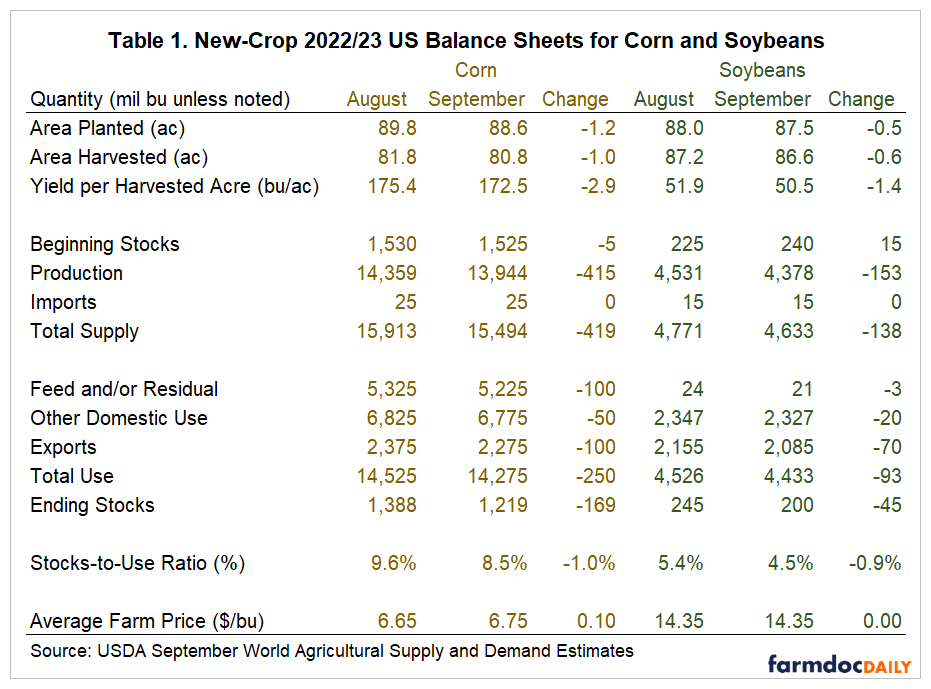 For soybeans, exports comprised the bulk of the reduction in use, declining 70 million bushels from a month prior. Domestic use was lowered by 20 million bushels. Ending stocks fell to 200 million bushels, so that new-crop ending stocks-to-use is just 4.5%, signalling further scarcity in what was already an acutely tight supply and demand balance.

Will South American Production Pick Up the Slack?

With US corn and soybean production and yield below long-run trend levels and prices elevated, other global production regions have strong incentive to boost production. Historic experience suggests such behavior is typical. For corn and soybeans, South American production often serves this balancing role. Figures 1 and 2 show deviations from long-run production trends for corn and soybeans in the United States and in Brazil from 2011/12 to the current 2022/23 marketing year. When production is below long-run trend in the United States, Brazilian production often compensates: negative values for the US correspond to positive values for Brazil. This is particularly the case for corn and true in more recent years for soybeans. Recent analysis suggests Brazil will harvest corn and soybean crops this 2022/23 marketing year (See: farmdoc daily August 29, 2022) Of course, this projection depends on conducive growing conditions, so market watchers will closely monitor South American weather in the months ahead. 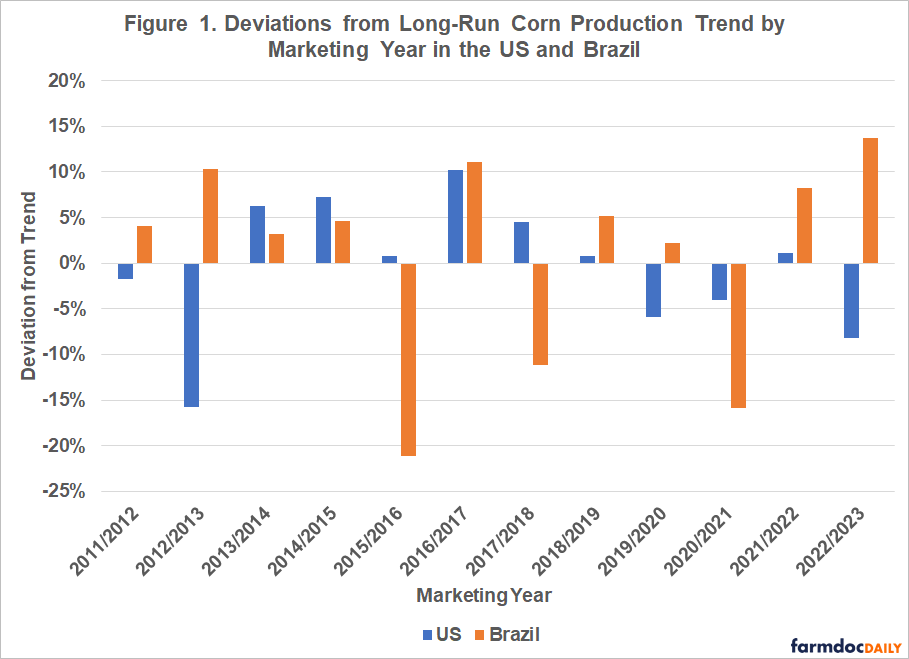 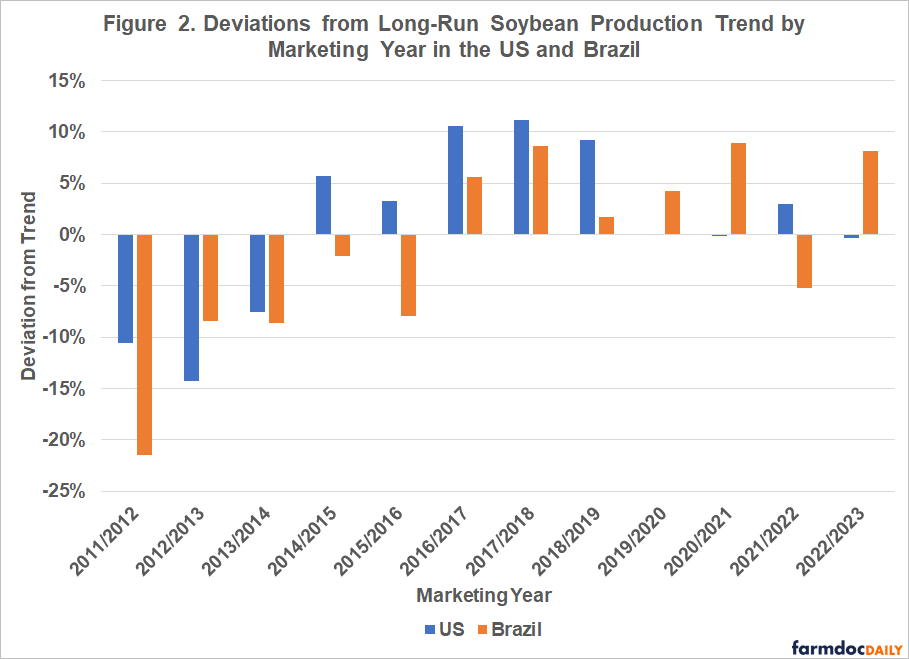 The September WASDE report made substantial changes to new-crop 2022/23 US corn and soybean production estimates. Both acreage and yield changes moved production lower. Soybean yield saw the biggest, most unexpected change with yield projections lowered by 2.7% from the previous August forecast. USDA offset some potential tightening of corn and soybean balance sheets by adjusting all use projections lower as well.

September WASDE figures will need to be reconciled with the resumption of export sales data releases later this week and implied commodity usage given in the September Grain Stocks Report to be released on September 30. It remains to be seen whether corn and soybean harvested acreage figures can be considered solid, since these numbers are typically adjusted in the October WASDE report as noted above. Though additional adjustments to new crop balance sheets are likely, the reality of a below-average US corn and soybean crop in 2022/23 is setting in.