Current futures prices signal relatively high prices for corn and soybeans in the fall of 2023. Relatively high prices are needed to have profitability given significant increases in costs for 2023 (farmdoc daily, August 2, 2022). Any price declines could result in negative profit margins, particularly until projected prices for crop insurance products are set in February based on settlement prices of the November (soybeans) and December (corn) 2023 Chicago Mercantile Exchange (CME) futures contracts. Once projected prices are set, a floor under revenue can be established using revenue insurance. Herein, we look at possible price changes based on history. Historical changes in prices suggest a 10% chance of having a projected price below $5.65 for corn and a 24% chance of a projected price below $13 for soybeans.

Our analysis for corn is based on prices of the December CME futures contract; the same contract used to set the projected price and harvest price for crop insurance purposes. As shown in Figure 1, three sets of prices are used: 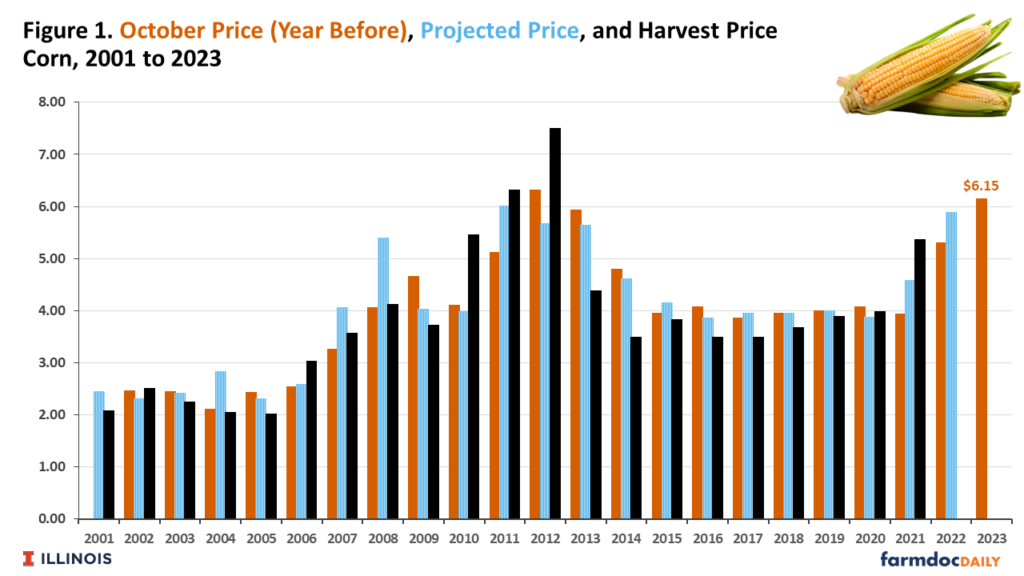 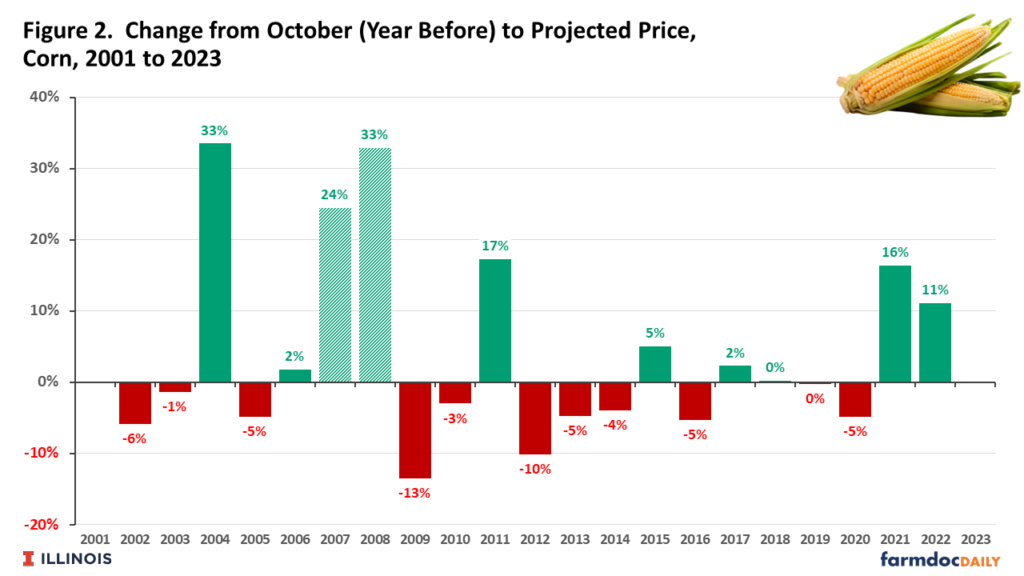 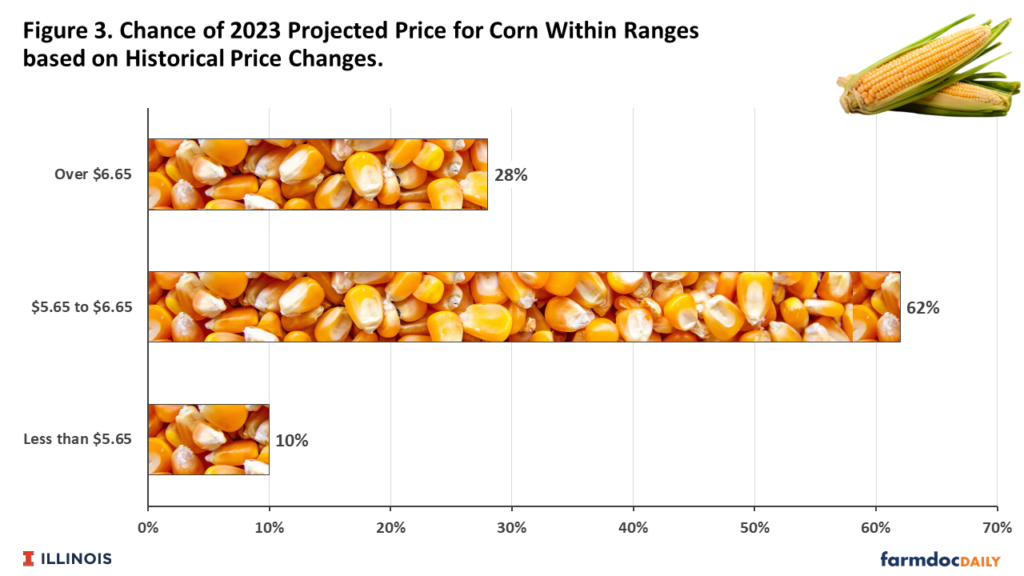 A similar analysis was conducted for soybeans, with November CME contracts used to conduct the analysis. The November contract is used to set projected and harvest prices for crop insurance purchases. The October and projected prices have a .92 correlation coefficient. The October and harvest prices have a .81 correlation coefficient. Like corn, there is a high degree of correlation between the prices, particularly the October and projected prices. The November 2012 contract price during the first week of October 2022 is trading around $13.45 per bushel. 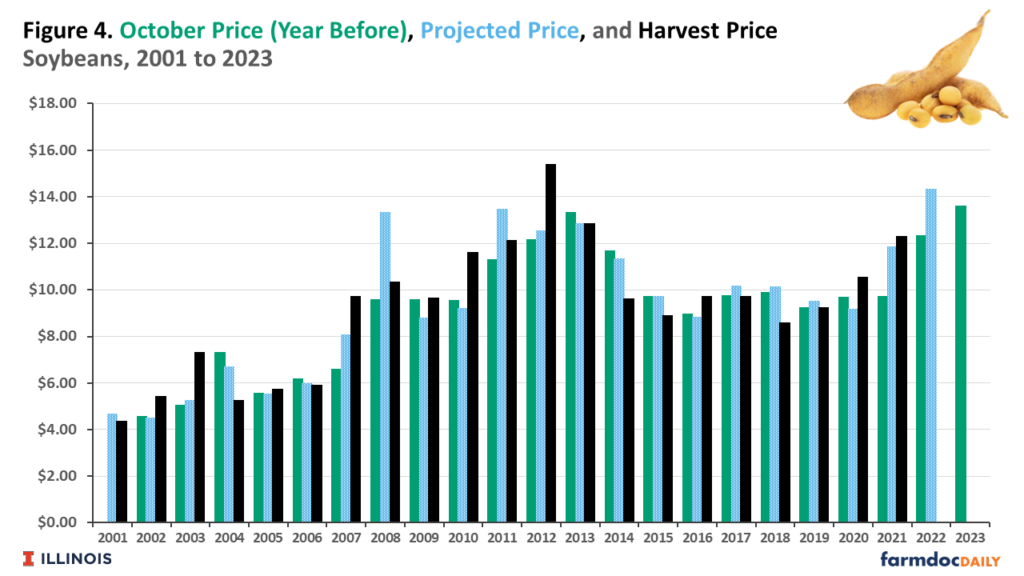 Figure 5 shows price changes between October and projected prices. Large increases occurred in 2007, 2008, 2011, 2021, and 2022. Like corn, the 2007 and 2008 price increases were heavily influence by the ethanol build, and similar occurrences may not occur for the foreseeable future.  Large negative deviations occurred in 2004 and 2009. 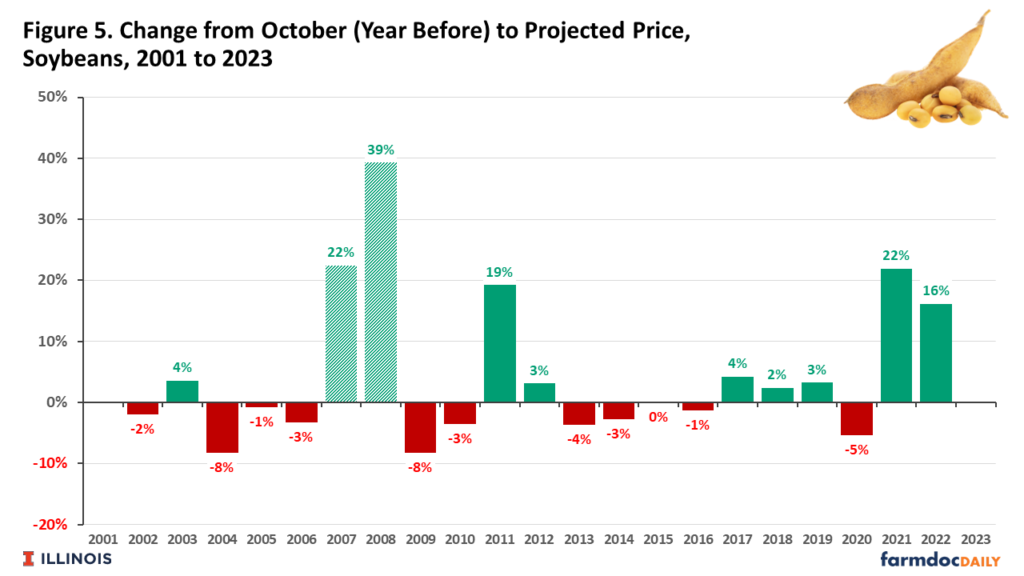 The histogram of possible projected prices is shown in Figure 6. History suggests a 24% chance of a projected price of soybeans being less than $13 per bushel. There is a 28% chance of being above $14 per bushel. As with corn, the greatest probability is a price near the current price for fall 2023. There’s a 48% change of a price between $13 and $14. 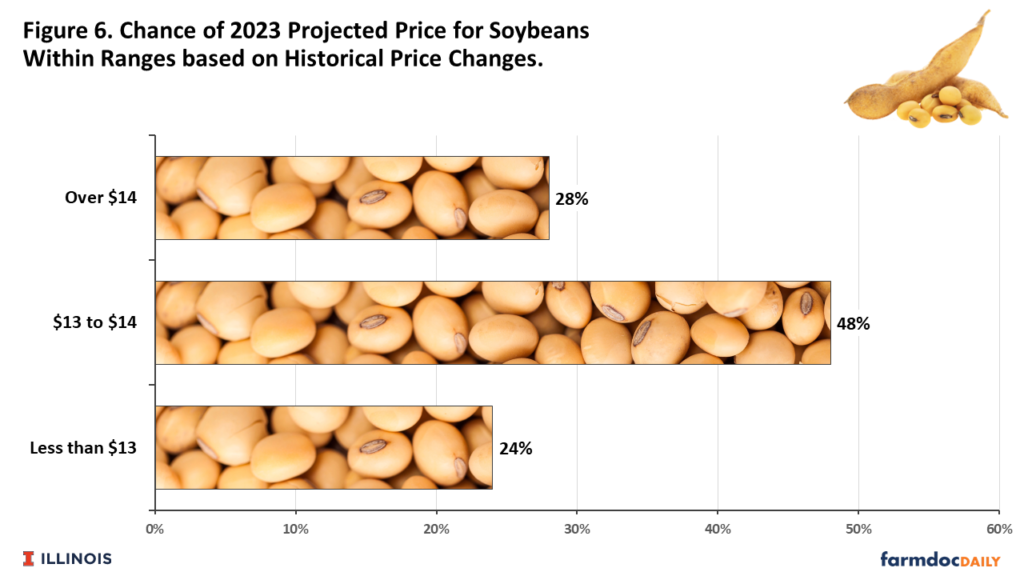 Once projected prices are set, farmers can establish floors under revenue using crop insurance products. Prices on current 2023 CME contracts point to relatively high projected prices, and expectations will center around $6.15 per bushel for corn and $13.45 per bushel for soybeans. Still, historical price changes suggest that there are significant possibilities for lower projected prices. Lower price projections could occur because of a combination of the following factors:

If a farmer is concerned about these risks of lower prices, pricing or hedging some of 2023 production would be a prudent practice, particularly as input decisions are made. Current input prices will result in much higher costs on most farms.

Higher prices are possible, likely due to the combination of the above factors:

The above analysis is based on historical probabilities. Using history in this matter assumes that today’s risks are similar to those of recent history. One could argue that risks may be higher with the Ukraine-Russian conflict continuing. Moreover, financial markets have faced turbulent times. In any case, farm-level risks will be reduced once projected prices are set at the end of February.