While fertilizer prices have declined since spring, fertilizer prices remain high, and fertilizer costs are significantly higher than a year ago. Therefore, reducing rates where practicable seems prudent. Some fields will have soil test levels above those that will cause a yield response from phosphorus and potassium applications. Significantly reducing or eliminating applications in these fields is economically prudent. Moreover, nitrogen applications above university recommendations can substantially reduce returns. Changes in nitrogen prices from now to spring likely will be influenced by changes in corn and natural gas prices. 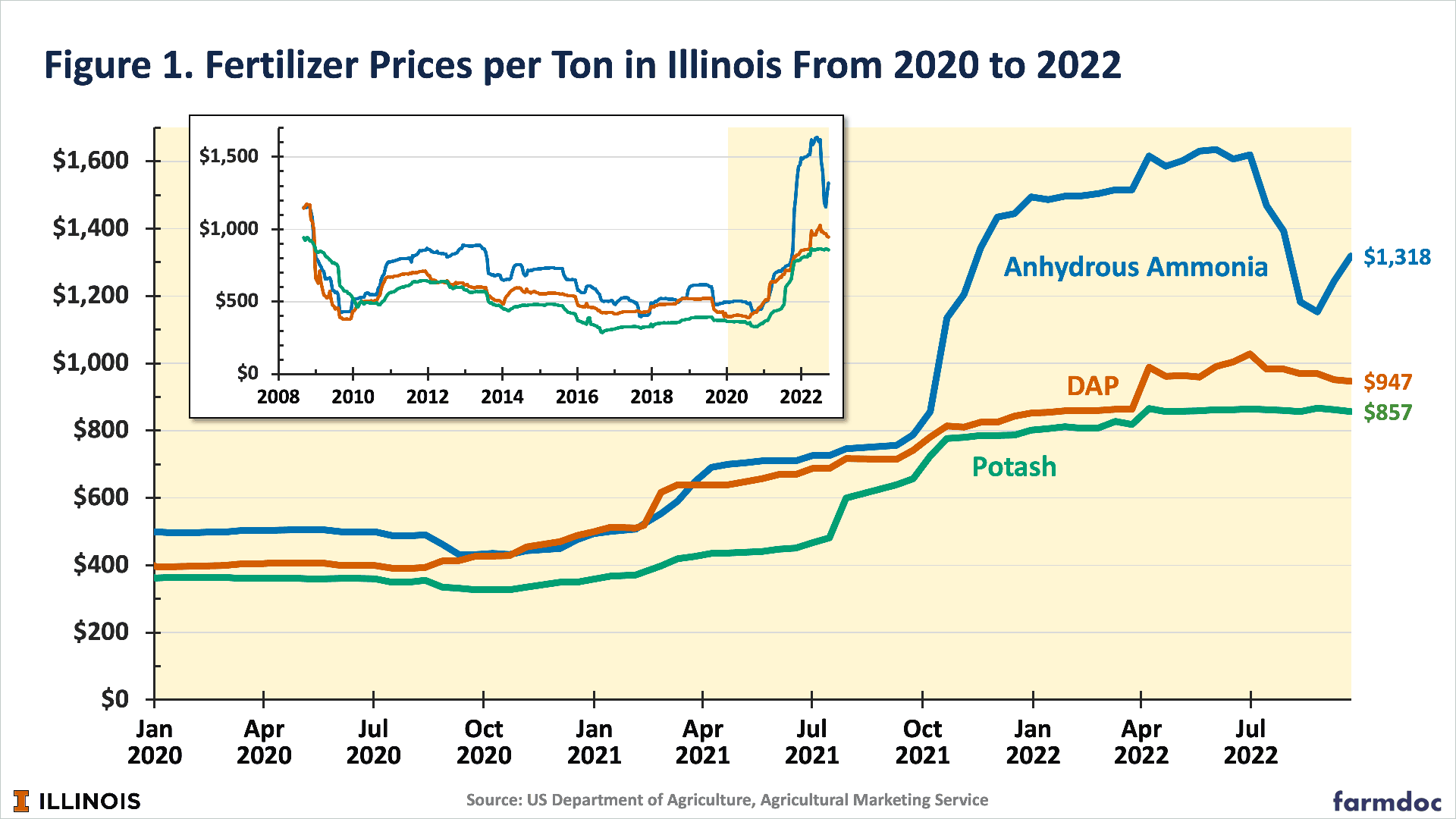 Diammonium phosphate (DAP) and potash fertilizers also remain at high levels. DAP was over $1,000 per ton in June 2022. On September 22, DAP prices were reported at $947 per ton. Potash prices have remained relatively stable at high levels, with a price of $857 per ton reported on September 22, 2022.

While ammonia and DAP prices have declined since spring, current fertilizer prices are higher than last year and will result in higher fertilizer costs than last year. Table 1 shows fertilizer costs computed using prices from one year ago on September 23, 2021, and current-year prices on September 22, 2021. As can be seen, anhydrous ammonia prices were $788 per ton last year and are now $1,318 per ton. As a result, anhydrous ammonia costs for corn increased from $67 per acre using 2021 prices to $1132 per acre using 2022 prices.

Table 1 gives fertilizer costs for corn and soybeans produced on farmland with expected yields of 220 bushels per acre for corn and 68 bushels per acre for soybeans. The Corn Nitrogen Rate Calculator was used to determine corn’s Maximum Return to Nitrogen (MRTN) rates. After accounting for the nitrogen in DAP, the MRTN rates resulted in applications of 170 pounds of anhydrous ammonia. Phosphate and potash rates are based on maintenance levels (see Nafziger, farmdoc, September 7, 2017). 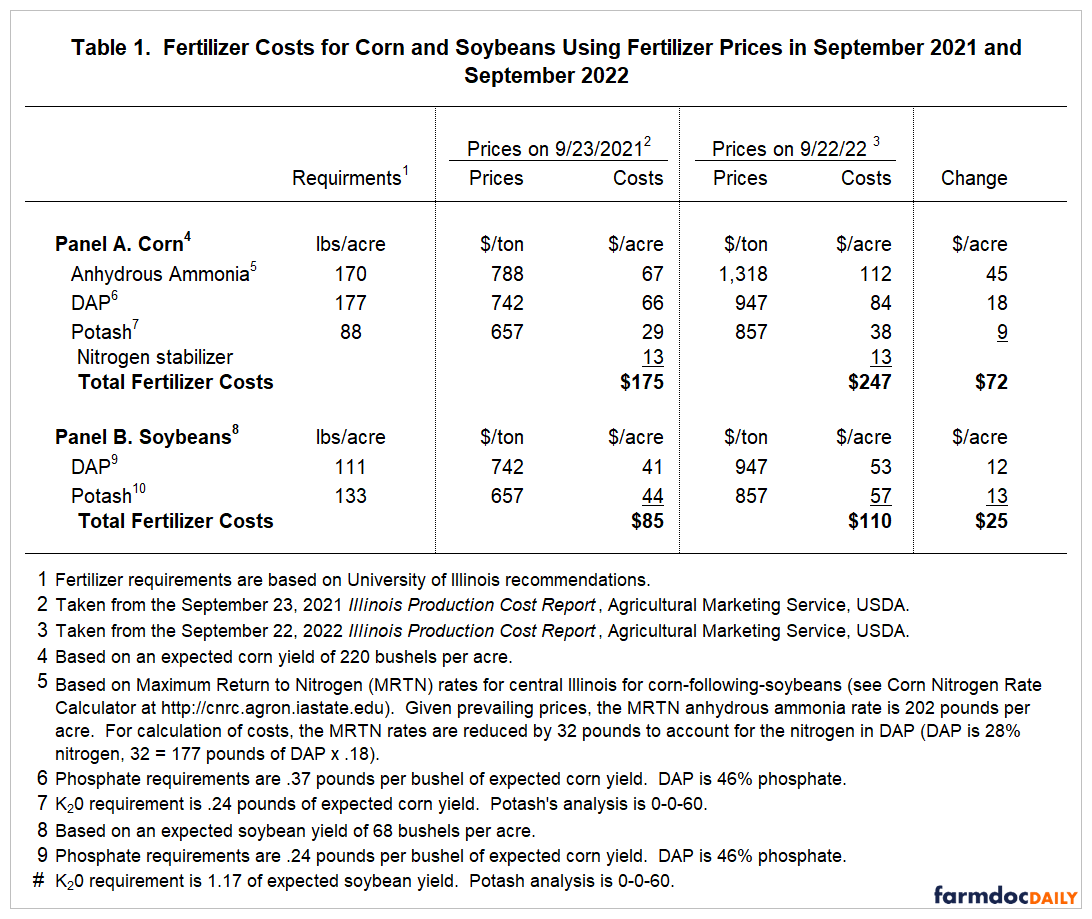 Individual farm costs could vary from those shown in Table 1, with the following being the most likely causes:

Even if soil test levels are below response levels, reducing phosphorus and potassium applications may still be warranted. In recent years, estimates of removal rates on grain have been lowered (see Nafziger, farmdoc, September 7, 2017). Checking to see if soil test levels exhibit an increasing trend over time suggests application rates can be reduced.

Many farmers apply above those rates. Data from Precision Conservation Management confirm that profit-maximizing levels are at MRTN, and thus profits can be increased by reducing nitrogen applications to the MRTN.

Some farmers are considering waiting until later in the spring, with hopes that nitrogen prices will decline. As indicated in earlier articles (farmdoc daily, December 14, 2021), anhydrous ammonia prices are highly related to corn and natural gas prices. The correlation coefficient between ammonia and corn prices is .71. The correlation coefficient between ammonia and natural gas prices is .61 (see Figure 1). 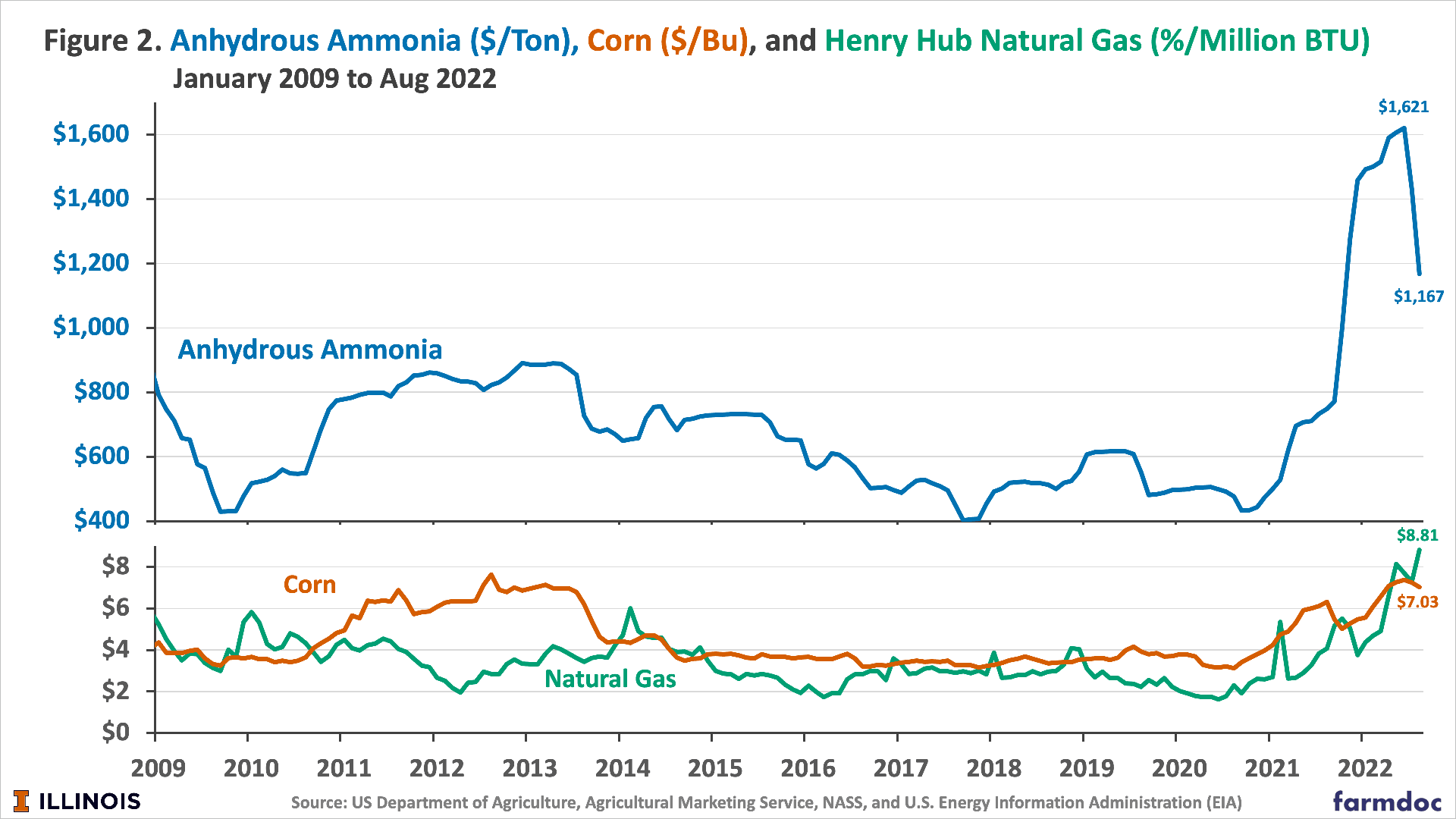