After the midterm elections on November 8, 2022, the balance of power in Congress remains to be determined as of this writing (see e.g., The Washington Post; Associated Press, Race Calls).  The bottom line, however, is already clear: both chambers will be almost evenly divided and neither caucus will operate on the floor, nor in committees, with many votes to spare.  The first branch of the federal government, designed in Article I and vested with all legislative powers by the Constitution, is likely to enter one of the most difficult Congresses in its history (U.S. Constitution, National Archives).  As discussed in the introduction to this series, the Framers of the Constitution very intentionally divided Congress and the legislative power in two and designed a complex, difficult process to enact new laws (farmdoc daily, October 27, 2022; Eskridge & Ferejohn, 1991).  This second article builds upon the discussion by reviewing one of the key theoretical concepts underpinning this design.

Arguably, the best source for understanding the intent of the Framers of the Constitution can be found in the essays in The Federalist Papers (Library of Congress, The Federalist Papers).   The essays were primarily authored by James Madison and Alexander Hamilton, each of whom were critical participants in the convention that drafted the Constitution.  Madison, among other things, presented a detailed plan for a new government to the convention and kept a journal or record of the debates.  He is often considered the “father” of the Constitution and would go on to serve as Speaker of the House, Secretary of State and the Fourth President (see e.g., Feldman 2017).  Hamilton was a delegate to the convention from New York and would go on to serve as the Treasury Secretary under President George Washington (see e.g., Chernow 2004).

One way to understand The Federalist Papers is to consider it a form of conference or committee report.  In the modern legislative process, a committee marks-up legislation by debating its provisions, offering amendments, debating and voting on them.  When the markup is complete, the committee votes to report the bill to the full House or Senate; when a conference committee completes its work it also reports the final legislative product to the entire Congress (Roberts, 2001).  Committee reports serve both informative and advocacy purposes.  The committee explains the legislation, provides critical supporting information from hearings and the markup, as well as the Congressional Budget Office cost estimates.  But the committee report also advocates for passage of the bill by the chamber and Congress.  The report will justify or defend the legislation, the specific provisions and decisions made in the process.  It is not a purely objective report and a committee report is a political document.  It is, however, informative and authoritative about the legislation, providing the clearest and most comprehensive view of the intent of the those who were most directly and intimately involved in writing the legislative text.

The Federalist Papers are a similar work product, written by those with the most direct and intimate role in writing the Constitution.  The essays were political documents written by those who helped draft text of the Constitution, debated the provisions and amended it.  The essays explained the provisions and decisions of the convention, defended them and advocated for the Constitution’s ratification.  As political documents—and similar to committee reports—they are not objective or unbiased, but they are explanatory, informative, authoritative and instructive (see e.g., Nourse 1996).  The essays contain arguments and counterarguments, as well as historical and philosophical discussions.  They form a critical foundation for the political theory of the American system of government with important perspectives on the intent of the Framers and a sense of the general mindset of those who worked to craft it.  The essays, in other words, help us understand the philosophical underpinnings for the sometimes vague and confusing words on the parchment.  Importantly, however, The Federalist Papers are not the final word on the meaning of the Constitution in our time or any time.

The basic design of the Constitution is familiar (or should be).  The Framers created three separate branches, dividing the immense power of self-government based upon its purpose.  Article I created Congress and vested all “legislative Powers” in it.  Article II created the President and Vice President vested all “executive Power” in that office and required an oath that the person assuming the office will “faithfully execute the Office of the President of the United States, and will to the best of my Ability, preserve, protect and defend the Constitution of the United States.”  Finally, Article III created the Supreme Court and empowered Congress to establish “such inferior Courts” into which was vested the “judicial Power of the United States” (U.S. Constitution, National Archives).  This design was rooted in Enlightenment thinking and philosophy, especially that of the French Baron Montesquieu in The Spirit of the Laws, published in 1748 (Stanford Encyclopedia of Philosophy; digital copies of The Spirit of the Laws available from Bard College or Google Books).

Hamilton quoted Montesquieu at length to make the point that the Framers were establishing a new version of government.  He was seeking to refute the arguments put forward by opponents of the Constitution.  The “science of politics,” he wrote, “like most other sciences, has received great improvement” and that the “efficacy of various principles is now well understood, which were either not known at all, or imperfectly known to the ancients.”  The separation of powers into three branches, he added, “these are wholly new discoveries, or have made their principal progress towards perfection in modern times” (Hamilton, The Federalist No. 9).  Figure 1 contains an excerpt of this argument by Hamilton.

Both James Madison and Alexander Hamilton wrote powerful essays on the issue of factions in government and society.  Their essays highlight the extent to which that issue was one of the most critical matters for the philosophy of the design embedded in the Constitution, and a primary concern for the Framers.  Madison memorably wrote of factions as the “instability, injustice, and confusion introduced into the public councils,” which “have, in truth, been the mortal diseases under which popular governments have everywhere perished” (Madison, The Federalist No. 10).  He added that the goal was to create “a well-constructed Union” that would be able to “break and control the violence of faction” (Id.)  Hamilton added that a “FIRM Union will be of the utmost moment to the peace and liberty of the States, as a barrier against domestic faction and insurrection,” which were the “disorders that disfigure the annals” of earlier republics (Hamilton, The Federalist No. 9).

The metaphors for faction are evocative and memorable.  Hamilton described factions in colorful, animated phrases focused on their consequences for “the internal tranquility of States.”  Factions were “the tempestuous waves of sedition and party rage” that caused distractions or continued agitations, and “the rapid succession of revolutions by which [previous states] were kept in a state of perpetual vibration between the extremes of tyranny and anarchy.”  He attacked arguments from opponents of the Constitution for “splitting ourselves into an infinity of little, jealous, clashing, tumultuous commonwealths, the wretched nurseries of unceasing discord, and the miserable objects of universal pity or contempt.”  The new system of government, therefore, was intended to “repress domestic faction and insurrection” and avoid the troubled fates of earlier societies (Hamilton, The Federalist No. 9).

Madison defined the term.  Figure 2 quotes Madison’s definition of faction, which was built on concepts of motivation and interest, or passion.  He did not define it based on whether the group of citizens were a majority or a minority.  Instead, Madison’s definition of faction is a group of citizens motivated to achieve narrow interests or self-interests at the expense of the interests of the larger or general public, without regard to their number or size (Shane, 2009).  He added that factions “divided mankind into parties, inflamed them with mutual animosity, and rendered them much more disposed to vex and oppress each other than to co-operate for their common good” (Madison, The Federalist No. 10).

Important in Madison’s essay was the mixture of realpolitik with idealism.  He recognized and acknowledged that factions are a part of human nature and a basic reality of societies; humans are political animals, but they play politics in groups or tribes.  “The latent causes of faction are thus sown in the nature of man,” he wrote, and these included a “zeal for different opinions concerning religion, concerning government,” as well as “an attachment to different leaders ambitiously contending for pre-eminence and power” or persons “whose fortunes have been interesting to the human passions” (Madison, The Federalist No. 10).  Arguably most interesting was Madison’s acknowledgement that “the most common and durable source of factions has been the various and unequal distribution of property,” and that “[t]hose who hold and those who are without property have ever formed distinct interests in society” (Id.).  Figure 3 provides some highlights from Madison’s writings on factions. 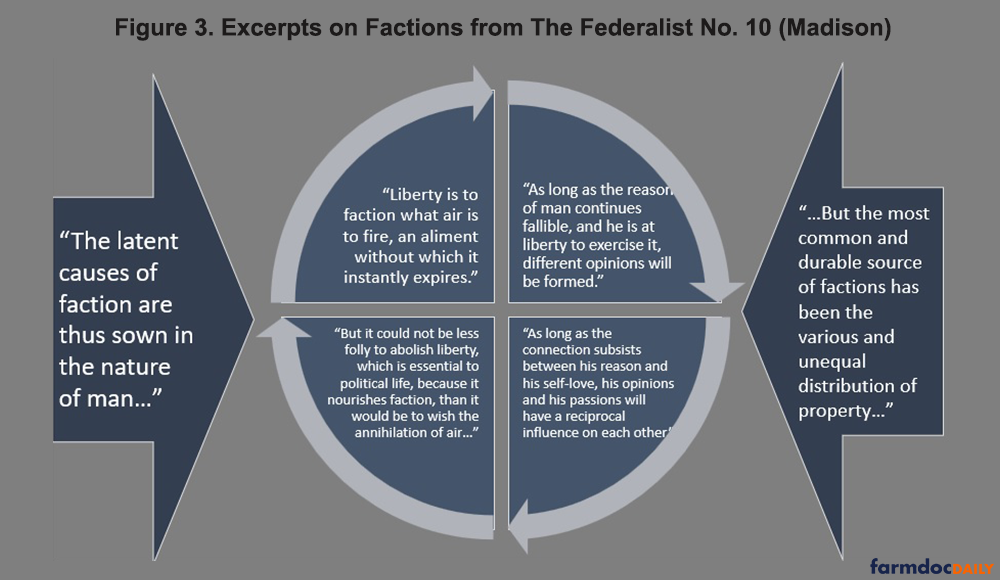 Madison warned that “[s]o strong is this propensity of mankind to fall into mutual animosities, that where no substantial occasion presents itself, the most frivolous and fanciful distinctions have been sufficient to kindle their unfriendly passions and excite their most violent conflicts” (Madison, The Federalist No. 10).  The causes of faction, however, were too fundamental to a free and self-governing society and could not be removed, eliminated or prevented.  Madison also cautioned that “[i]t is in vain to say that enlightened statesmen will be able to adjust these clashing interests, and render them all subservient to the public good.”  One reason was that “[e]nlightened statesmen will not always be at the helm” (Id.).  These realities presented a substantial conundrum for the Framers, as well as enormous challenges in designing a new government.  The design had to control the effects of faction to achieve some version of the public interest or common good.

The Framers’ understandings of factions have carried through our history and development as a Nation, while being built upon by many scholars.  For example, the economist and political scientist Mancur Olson wrote in 1965 that “[s]ince relatively small groups will frequently be able to voluntarily organize and act in support of their common interests, and since large groups normally will not be able to do so, the outcome of the political struggle among the various groups in society will not be symmetrical” and the small groups will “have disproportionate power” (Olson, The Logic of Collective Action, at 127).  Upon this observation, an entire school of thought about politics and government has been developed with various implications and consequences (see e.g., Froomkin and Shapiro, 2021; McLean, 2017; Grofman, 1993; Rubin, 1991; Hovenkamp, 1990; Kelman, 1987).

The matter of factions has been well-studied, extensively written about and debated, but it remains a serious conundrum for government.  Our understanding of the matter is often belied by our disagreements and our continuing struggles to manage factions.  This second installment seeking to develop an understanding of Congress has reviewed two of the advocacy essays for the Constitution, written by James Madison and Alexander Hamilton.  In their essays, both diagnosed political factions as among the gravest threats to a system of self-government.  Concerns about factions greatly influenced the design; much from those writings echo clearly in our own time when we consider Congress and the state of our modern body politic.

Nourse, Victoria. “Toward a Due Foundation for the Separation of Powers: The Federalist Papers as Political Narrative.” Tex. L. Rev. 74 (1996): 447.