The farmdoc daily article of November 16, 2022 documented an increasing gap between the growth in consumption and growth in yield of world feed grains, oilseeds, and food grains.  More land is thus being planted to these crops, with roughly 22 million more acres needed in 2022.  This article contains the same analysis for the US.  A decline in US food grain acres due to increasing food grain yields and declining food grain consumption has offset the need for more US feed grain and oilseed acres due to a gap between the growth in consumption and yield.  As a result, total US land in feed grains, oilseeds, and food grains has been stable in the 21st Century; however, more land may be needed in the near future.

The data in this article are from the Production, Supply, and Distribution Online (PSD) database managed by the US Department of Agriculture, Foreign Agriculture Service.  To provide comparability with the November 16, 2022 farmdoc daily, the analysis begins with the 1981/1982 crop year. 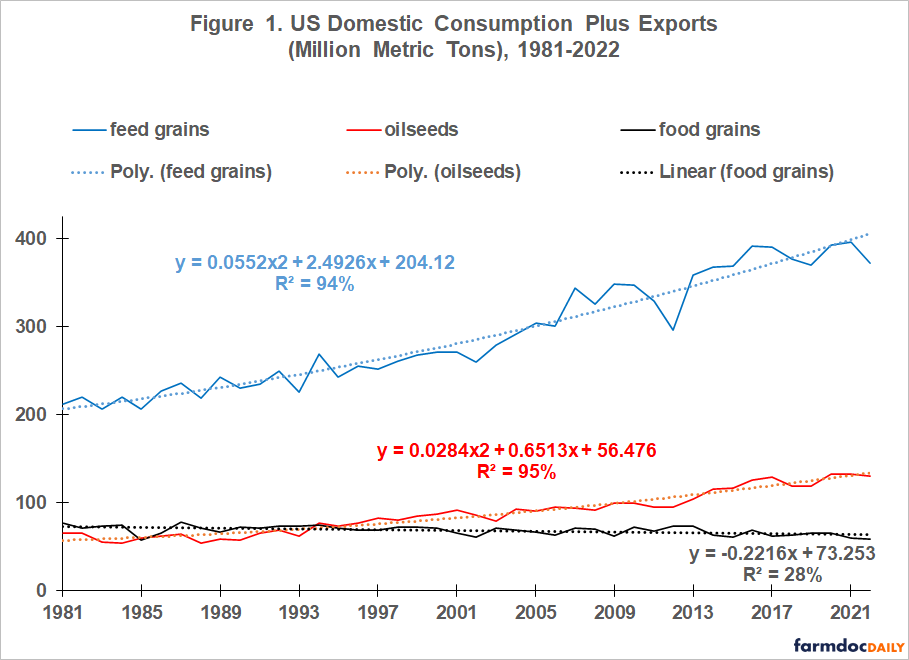 A debate within the US crop production sector is whether the growth rate of US trend yield has increased.  This study finds no increase in the growth rate since 1980.  Yield, measured in metric tons per hectare, has followed a constant linear trend for feed grains, oilseeds, and food grains (see Figure 2).  The linear trend explains 78% (food grains) to 88% (feed grains and oilseeds) of the increase in yield (100% is a perfect fit).  Adding a squared or curvilinear term to capture an increase in the rate of increase in trend yield adds little explanatory power.  Explanatory power remains 88% for feed grains and increases only one percentage point to 79% for food grains and 89% for oilseeds. 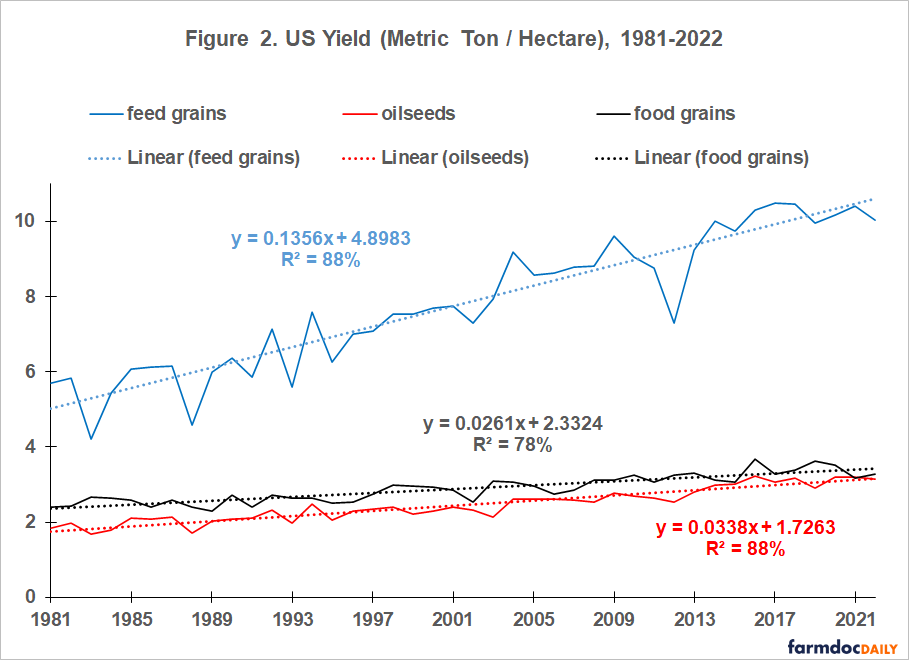 The time paths of trend yield derived from the Figure 2 equations are presented in Figures 3, 4, and 5 for US feed grains, oilseeds, and food grains, respectively.  Figures 3-5 also present the increase in yield needed to satisfy the trend increase in consumption derived using the Figure 1 equations and assuming the same area is harvested as in the preceding year (i.e. no increase in harvested area).  See Data Note 4 in the November 16, 2022 farmdoc daily for an example of this calculation. 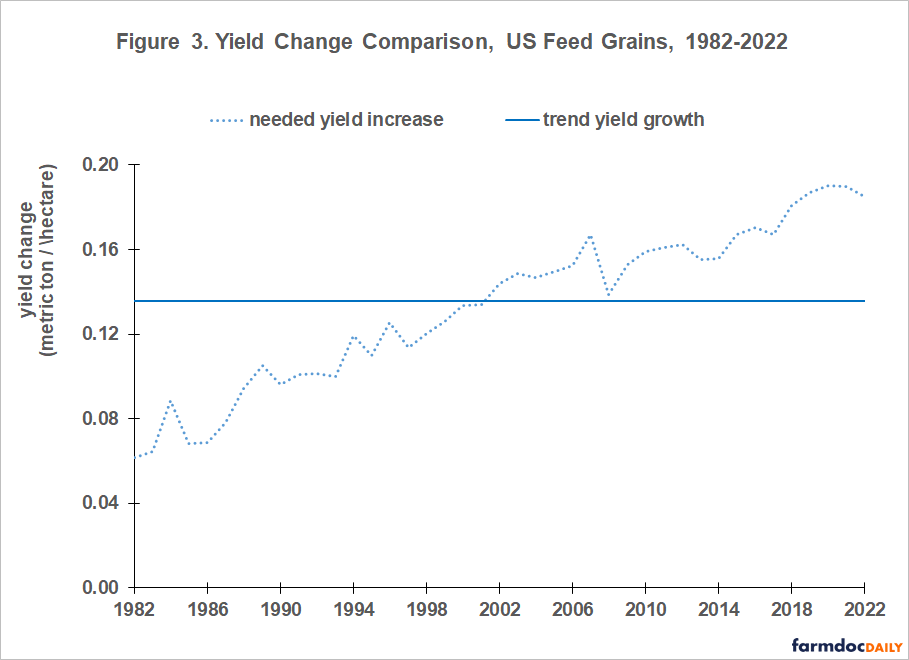 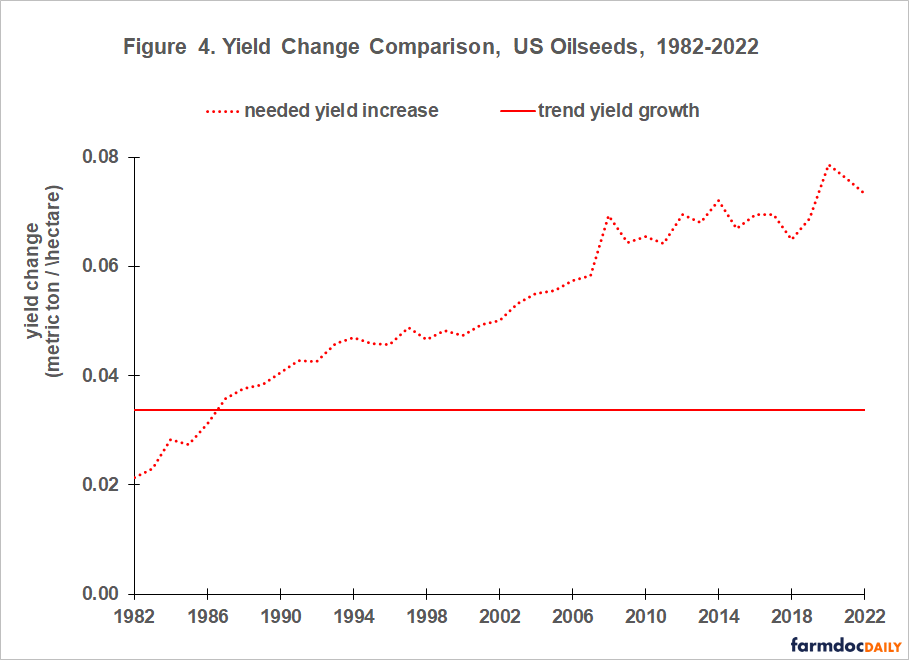 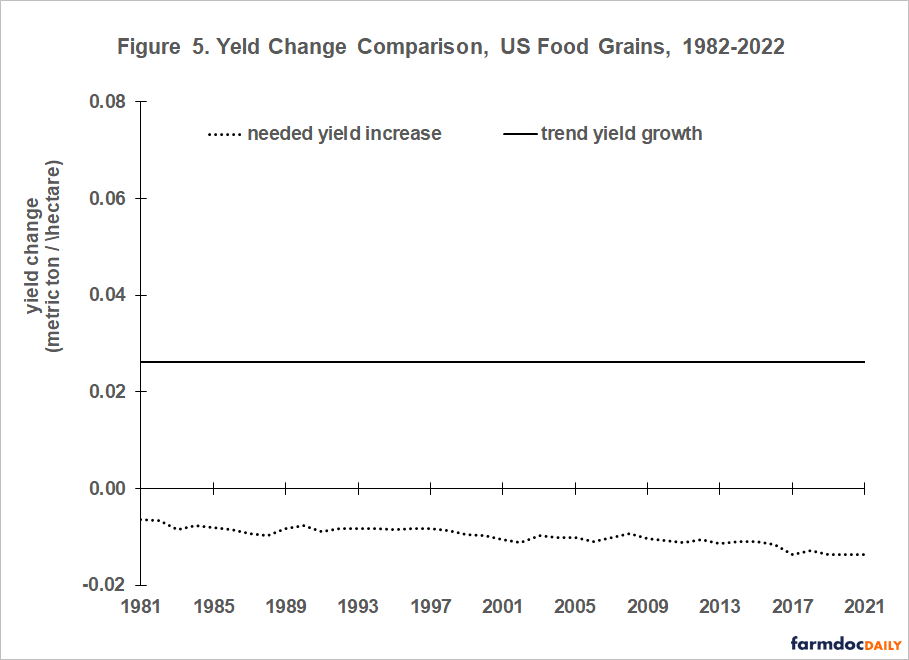 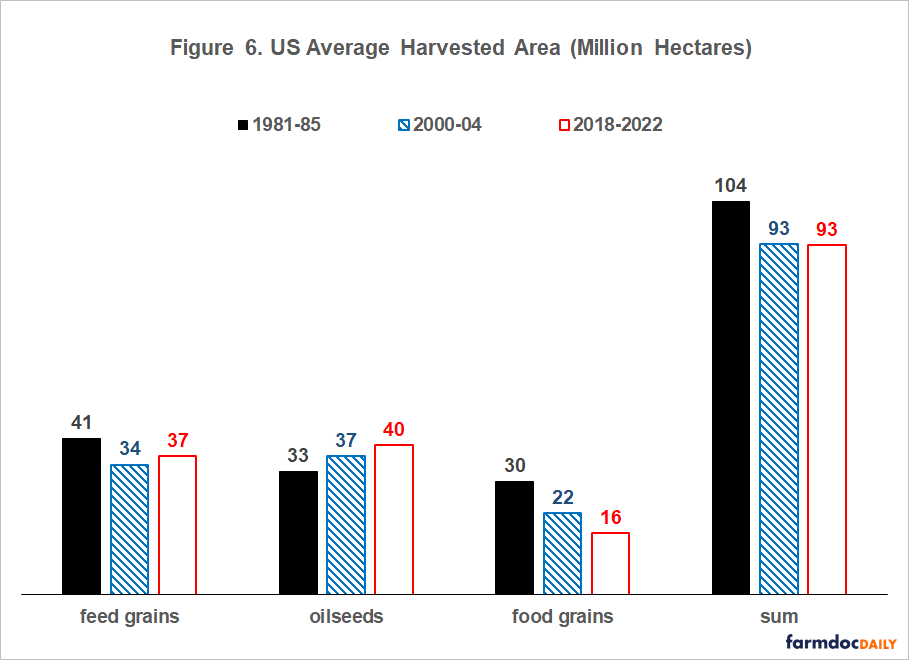 Comparing US and World by Crop Group

Both the US and world transitioned from needing fewer to needing more land in feed grains around the turn of the 21st Century.  Moreover, the gap between trend yield growth and the increase in yield needed to satisfy the growing use of feed grains is increasing for both.

Both US and world land planted to oilseeds has increased as oilseed trend yield has not kept pace with the increase in yield needed to satisfy the growth in use of oilseeds.  However, a difference exists.  The US yield gap has widened since 2000 while the world yield gap has changed little.

Partly because of declining exports of food grains, the US has not had to increase land devoted to feed grains, oilseeds, and food grains in the 21st Century.

However, the growing gap for US feed grains and oilseeds between a linear trend yield and the increase in yield needed to satisfy the growth in use of feed grains and oilseeds suggests more land may be needed to produce these crops in the near future or food prices may need to move higher.  An increase in cropped land potentially negatively impacts the environment through land conversion.  Higher food prices contribute to higher inflation while disproportionately impacting the poor.  Both may also contribute to global insecurity.

A policy option is to increase the growth in production.  Both historical observation and academic research (see Fuglie, 2018, and studies reviewed therein) strongly imply higher growth in production will require more funding for research.  Given the lag between research and impact on production, research funding would need to be increased sooner rather than later.  The next opportunity for the US to prioritize this research is the upcoming farm bill.